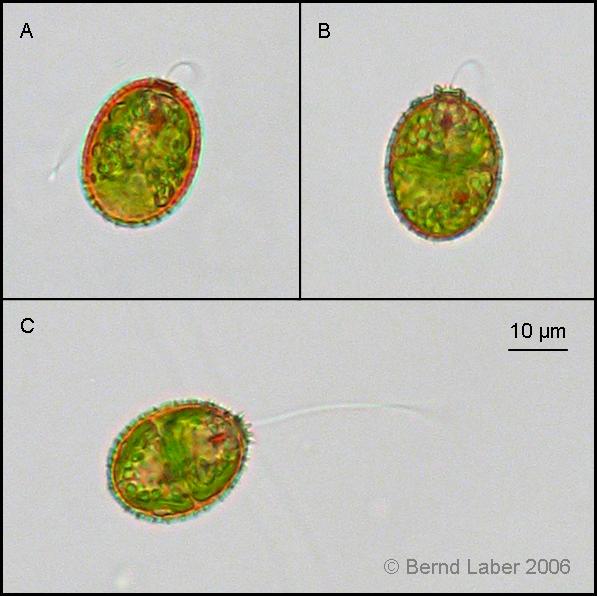 The bodies of these euglenoids are enclosed in an envelope, or lorica, with a small opening at the front of the cell through which a single flagellum emerges. The specimen in Figs. B and C are undergoing cell division (note the two red eyespots in B). Though asexual reproduction in euglenoids is by longitudinal cell division, the individuals shown in these pictures apparently undergo transverse fission. However: “(In photosynthetic euglenoids) cell division …starts anteriorly at the reservoir base and proceeds posteriorly until until sibling cells separate….After cell division, the two products of division line up one behind the other along the longitudinal lorica axis, and presumably one or both of the sibling protoplasts emerge naked from the apical opening, swimm off, and each secretes a new lorica” (J. D. Wehr, R. G. Sheath (eds.) The Freshwater Algae of North America, p.405 & 414, Academic Press, 2003).

Bernd... I have seen these regularly, but never observed what you have shown us here. Very nice... Thanks!

Interesting that they both form new lorica.
Top

Nice job on these Bernd, you captured the flagellum quite well. Something I have not been able to do with a flagellate, well not to often anyway.