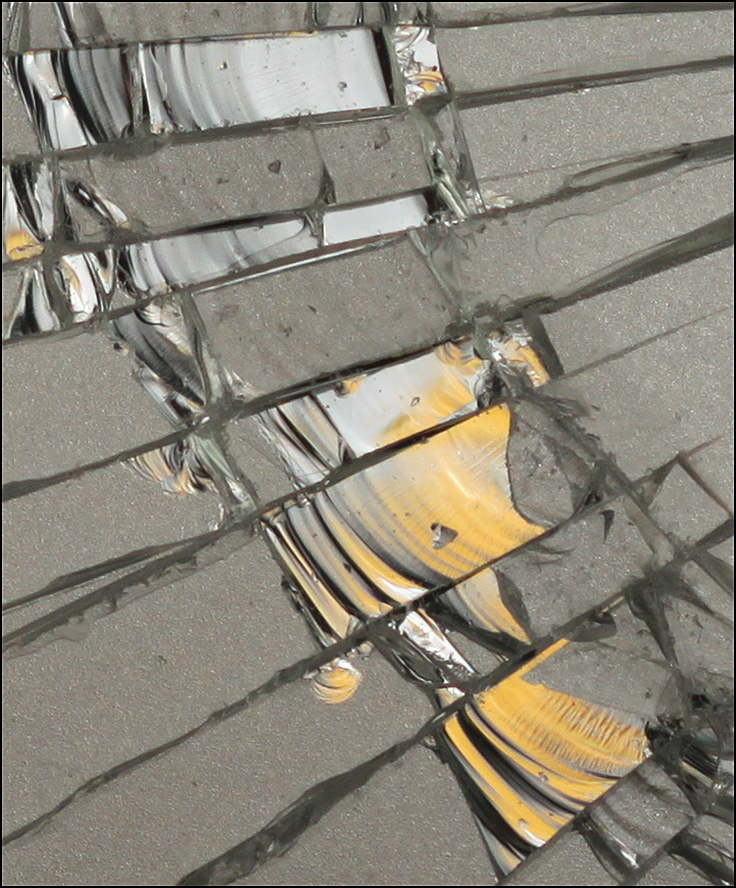 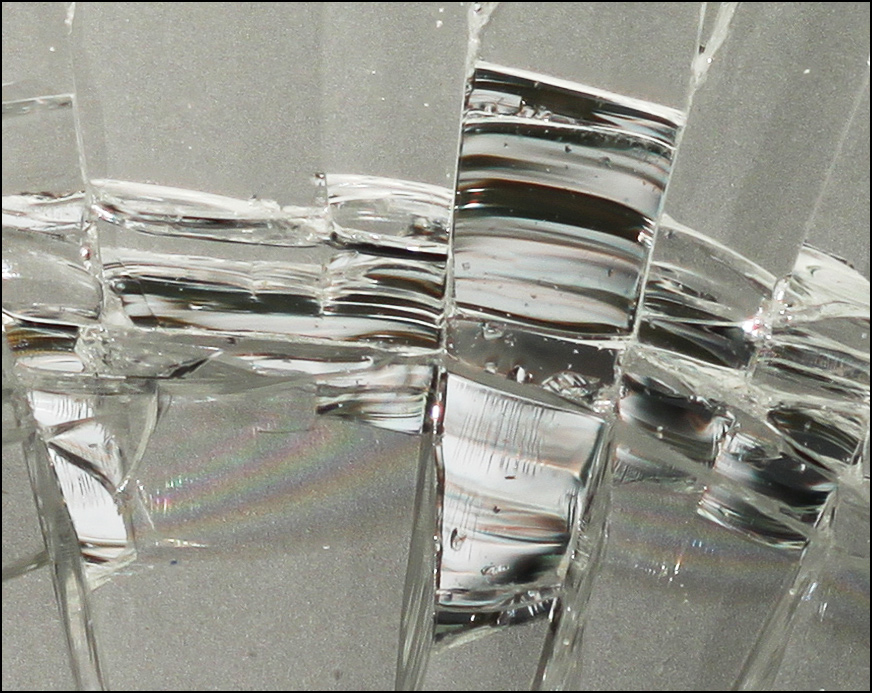 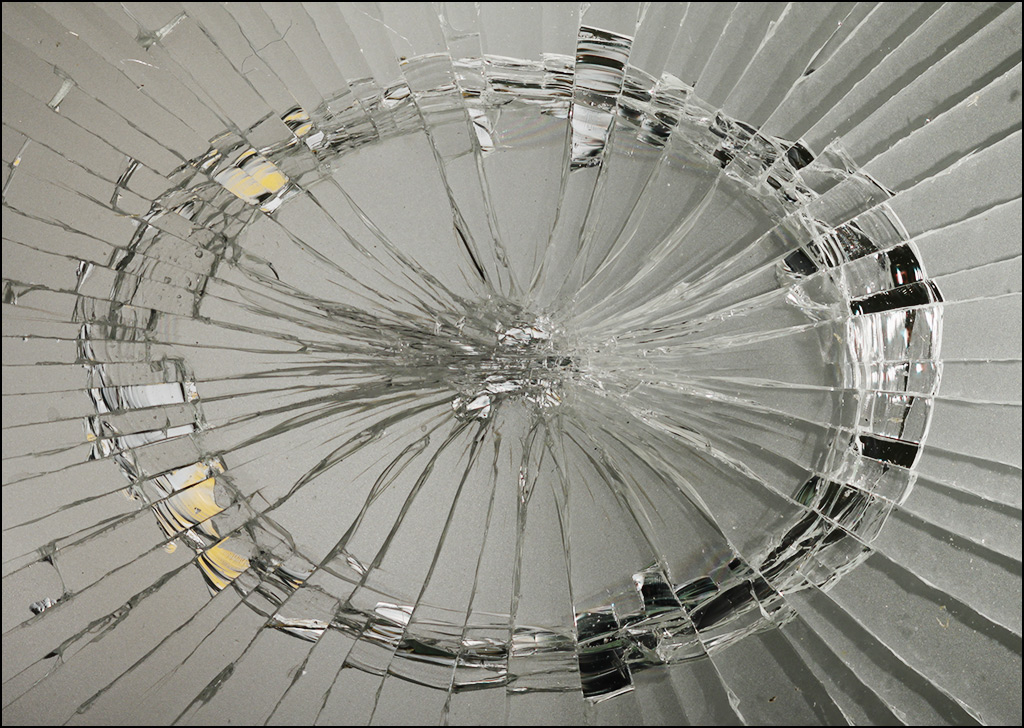 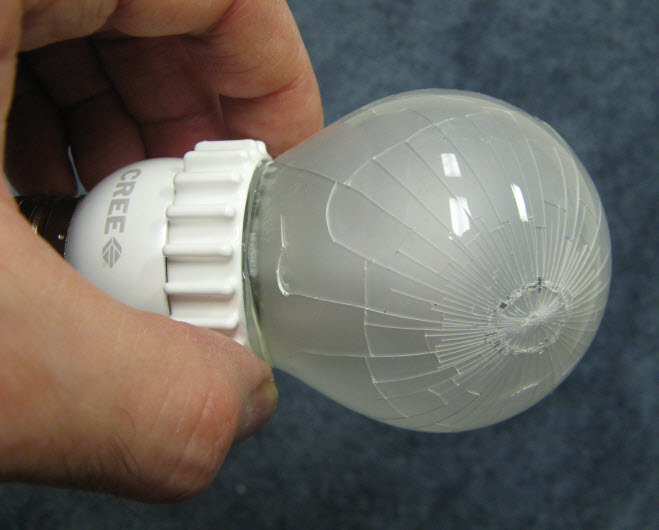 I've been installing quite a few of the new Cree LED bulbs in my house. This one apparently got set down too hard on a countertop.

Probably you're wondering why the thing didn't just explode. It's because these bulbs are covered with a film of flexible and somewhat sticky plastic. After these pictures were taken, I was actually able to cut the glass shell all around the base and separate it completely away from the innards, without having the shell come apart.

Closeup of the cracks was shot at roughly 1:1 using an Olympus 80 mm bellows macro lens at f/5.6, focus stepped at 0.2 mm using a StackShot rail and processed with Zerene Stacker DMap. Illuminated for photography with four light sources: two fiber bundles from a halogen illuminator and two Jansjö LEDs. The first two images are crops of the third, with a bit of curves adjustment to bring out the colors and textures best for each one.

Nice stuff, Rik.
That 80mm OM Bellows is a great lens. I should use mine more often. I do my stacks with it using the focusing helical manually.
Michael Reese Much FRMS EMS Bethlehem, Pennsylvania, USA
Top

fascinating subject matter. Shows me how you can find material most anywhere. Thanks for the ideas!
Top

I'm wondering..
Does the lamp need this outer envelope?

As you can cut it, would it make a useful diffuser, a Ping Pong Bulb?
Top

Strictly speaking, the lamp does not need the outer envelope.

However the drive power is surprisingly high voltage, around 230VDC apparently due to lots of tiny LED elements in series. In addition the LED drive is connected in part directly to the electric mains. All this will be the subject of a later posting.

Summary for here is that I strongly recommend do NOT try operating this type of light without its outer envelope, unless you are already experienced in working with unprotected high voltage power supplies.


As you can cut it, would it make a useful diffuser, a Ping Pong Bulb?

I don't know. As you can guess from the pictures, the shell is glass covered by flexible plastic. "Cutting" it actually means grinding and breaking. As the moment I am not enthusiastic about this material as a general purpose diffuser.

Aesthetically and technologically enjoyable photos! A great example of how everything in the macro world is effectively in a separate universe unless you can explore it through macro photography.

I didn't know that LED light bulbs were composed of many little LED elements, but this would be consistent with the multiple bulbs provided by many higher power LED flashlights.

A slightly related question that just came up in my home: I just bought some CFL light bulbs for our living room overhead light. These special CFL bulbs are advertised as uniquely compatible with ordinary light dimmer switches, according to both the package and the store clerk. Allegedly, ordinary CFL bulbs won't work with an ordinary light dimmer, presumably because they reduce the voltage applied to the light fixture.

Would the current generation of LED light bulbs be compatible with light dimmers?
-Phil

DQE wrote:I didn't know that LED light bulbs were composed of many little LED elements, but this would be consistent with the multiple bulbs provided by many higher power LED flashlights.

In these Cree bulbs, "multiple" is taken one step farther than in flashlights. Inside the Cree bulbs there are 10 small yellow light emitters, each about 2.5 mm square. My expectation was that each of those would be a single LED, rather like the unit shown HERE but higher power. That turns out to be wrong. In fact each small yellow square contains 8 even smaller blue LED chips, surrounded by a single layer of yellow fluorescent material. Everything is wired in a single long series, so there are a total of 80 LED junctions. Each junction requires around 3 volts at 40 ma for full brightness, so the overall power consumption of the LED chain is around 240 volts at 40 ma.


Would the current generation of LED light bulbs be compatible with light dimmers?

Yes. See the literature at Cree. I tested these bulbs by replacing one of a pair of 60 watt incandescent bulbs connected to a decades-old dimmer. Compared to the incandescent, the LED dimmed at a different rate and was somewhat brighter at minimum setting. But generally speaking the LED would be a good replacement. For me it's even better because there is very little if any change in color as the LED dims. In one room I've deliberately installed more light than I need most of the time, and just run it dimmed except for special occasions when I want that extra boost.

What makes dimming possible is that the base of the bulb contains a very sophisticated switching power supply that converts AC input to higher voltage DC, current regulated on the output side to control LED brightness, and waveform shaped on the input side ("power factor correction") to make the unit act like an almost purely resistive load. Compared to an old incandescent bulb that basically consisted of a coil of tungsten wire, these new bulbs are an astonishing display of high tech complexity.

Thanks for the very informative (as always!) reply re LED bulbs.

Is there a real net power savings when one dims LED light bulbs or is the power just absorbed in the dimmer switch instead of the light bulbs?

From your description but limited by my inadequate understanding of real world home electrical systems, I gather that the bulb manages to compensate for the things the dimmer switch is doing to the light bulb and that less current is used (and thus less billable wattage would be used). It doesn't sound like an LED light bulb is a simple, passive electrical load.

An interesting set of interlocked technical topics, especially suitable for my in progress cloudy, cold November day in Maine...like everything else in our technology-based world, there are endless layers to each "onion". Macro photography has a way of exposing many of the layers, perhaps analogous to the way it does that for bugs.
-Phil

DQE wrote:Is there a real net power savings when one dims LED light bulbs or is the power just absorbed in the dimmer switch instead of the light bulbs?

It sounds like you're thinking of a series-resistance type dimmer, where the total power gets split between the dimmer and the load. Those have the huge drawback that the dimmer gets hot -- sometimes very hot. As an example, if you used series resistance to dim a 120 watt load, then by the time you got the load down to half-power 60 watts, you'd be dissipating almost 25 watts in the dimmer. Do that in a wall box and you'd be well on your way to committing arson. That type of dimmer is OK only for low power applications, such as a few watts in the base of my microscope.

At higher power, say for residential lighting, dimmers have always been more sophisticated devices that consume only small amounts of power. Typically they consist of a semiconductor switch that is turned on for only the latter part of each half-cycle of the AC line voltage. If the switch comes on early, then the device gets essentially full power; the later the switch comes on, the less power the device gets. A small amount of power is lost to on-state resistance in the semiconductor switch, but that's quite small which is why the dimmer itself stays cool.

Bottom line is that there are real savings when you dim any sort of bulb.


It doesn't sound like an LED light bulb is a simple, passive electrical load.

There's more circuitry in this light bulb than there was in the radios of my youth.

Here's a thumbnail of what's inside the base. There are two filter caps and another inductor on the back of the card. The biggest cap carries a rating of 10 µF at 315 V. 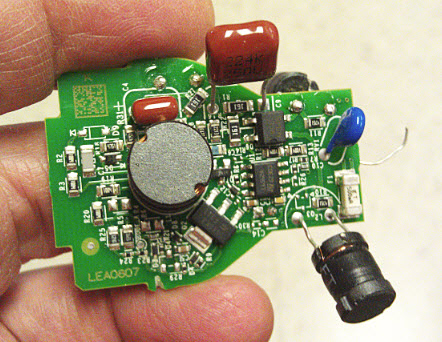