Periodically the question arises, "What does a teleconverter do and why might I want to use one?"

Often this is accompanied by some explanation, something along the lines of "I mean, a teleconverter surely degrades the image, so why bother? Why not just shoot without the teleconverter and crop?"

In brief, the reason is that while the image shot with the teleconverter will look less sharp, it's quite likely to show more detail on subject.

That may seem like a conflict, but it's not.

Contrary to popular myth, at this time many good lenses actually out-resolve most digital sensors. What the teleconverter does is simply to make the optical image bigger. This process enlarges the image's original flaws and adds some more of its own, but the enlargement also allows the sensor to capture detail that was previously inaccessible because of the sensor's finite pixel size.

For context, here are the full frames. We'll be looking closer at that resolution chart taped to the door.

Main lens by itself: 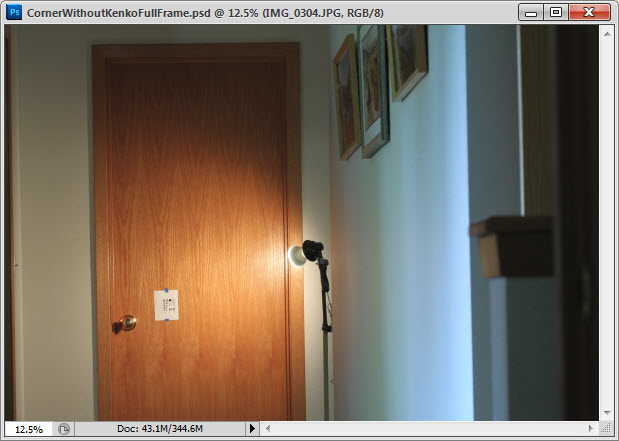 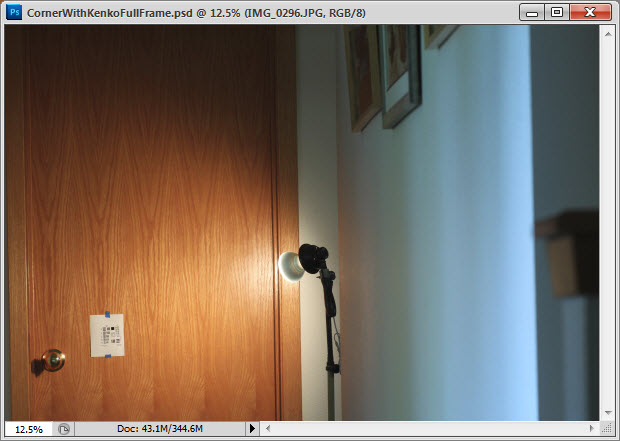 And even closer, main lens by itself at 200% pixels:

With teleconverter, at 200% pixels:

You can see in these images that the setup with teleconverter resolves about two more sets of bars. There are six sets per 2X, so this means that the teleconverter has increased the effective resolution on subject by about 26%.

If both the teleconverter and the lens were perfect, we might expect an improvement in proportion to the power of the teleconverter, about 40% in this case. Presumably the missing 14% is due to imperfections in one lens or the other, and the experiment doesn't tell us which.

You can also see in these images the subtlety of cambridgeincolour's calculation that for a 15 megapixel APS-C sensor, "diffraction limits standard grayscale resolution" at f/10.7. Sure enough, at f/11 in these images, there's a slight but unambiguous loss of resolution on the finest bars. Nonetheless, the images with teleconverter show that the f/11 optical image resolves at least two more blocks of bars that were missed by the camera. There's plenty of blame to go around in this case -- at f/11 the lens is not fully exploiting the sensor, but also the sensor is not fully exploiting the lens!

Anyway, the image with teleconverter is 40% bigger and shows 26% better resolution on subject. The missing 14% makes the TC image look less sharp, even though you can see finer detail on subject.

I use an example easy of understand in my classes. Imagine that we have a lens that can resolve 10 lines/mm. And a camera with pixels of 0,5mm. Thus, the lens can give a resolution five times greater that the chip. If we use a TC x2 we will obtain a twice increased perfectly focused image because the lens can resolve points five times smaller that the chip can "see" and the actual image is only x2. Obviously the reality is not so clear, we must considere that the "perfect lens" no exist and the lost of iris points...
Top

Rik, another well done experiment and clear explanation.
Big thanks for performing and posting it!

After bad experiences with TCs long time ago with film now I will look at them with new eyes.
Pau
Top

I have used teleconverters few times and I like them, I was surprissed to see how well the mitutoyo 10/0.28 plus 2X TC held against nikon 20/0.40
http://www.photomacrography.net/forum/v ... econverter

A comment or two, partly because we've been mentioning the use of a teleconverter in the thread on Lens choices for magnification about 2x, Here .
An extra reason for the teleconverter use being beneficial, comes about where a particular prime lens has a defined magnification range. All bellows-macro lenses have an optimum range (see examples at the list Here: http://www.macrolenses.de/objektive.php?lang), with some fussy examples designed primarily for 1:1. They degrade even centrally at unpredictable rates when used at too high a magnification, and the image circle may become too small.
To take and simplify an illustration, if you want a "1:1" lens to provide 2x magnification, you have a choice of There won't be many cases where the last option is best, but one was with a "1:1" lens (different magnification), shown by Ray : Here .

Another use to which they have been put, is with a finite microscope objective. Where the image circle is too small for direct projection onto a sensor, a teleconverter can be used to fill the frame in a way similar in effect (though the optics construction is not the same) to that of a projection eyepiece.
Top

Everybody, thanks for the feedback and additions.

One more issue not explicitly called out yet is convenience.

By itself, that Canon 100 mm f/2.8L Macro IS USM focuses from infinity to 1X with the turn of its ring.

In combination with the 1.4X teleconverter, it focuses from infinity to 1.4X, again with just the turn of a ring, no fiddling with add-on lenses or changing extension tubes.

These advantages of wider focus range and greater working distance come at the cost of a slight loss of image sharpness. But that lens is so sharp to start with that the loss is not something I would worry about for most purposes.

let's see if I can explain in my bad English ...

I remember in astronomy the comparative for high magnification , using small focal eyepieces or the combination of a barlow lens and an eyepiece of focal length twice .

For planetary observing , I've always preferred the second option. For years I 've used a teleconverter instead of a barlow. This provides better quality throughout the field, it was created to cover 24x36mm .
An additional advantage of this combination is that I get the increase of a more potent eyepiece but the convenience of observing with an eyepiece with a bigger accommodation and more DOF , or more time the focused image .

I've thought about Rik graph that he drew a few days ago about the halos . Halos width are proportional to the angle of the light beam entering in the objective. If to work with a teleconverter allows us to use a less powerful lens, further away from the object to be photographed , this angle decreases and the halo will be smaller .

I'm on the right way?

Regarding halos etc, it seems that the point about the lower power objective is that it has a smaller NA. So I'm thinking you could achieve a similar result, with an aperture added to the objective.
Yes, I remember seeing more detail with a smaller aperture where "transparent foreground" was a problem, too. Again, the wide cone angle was the issue.
An immediately obvious advantage of using the teleconverter with lower mag objective, is that you'd expect more Working Distance. I expect we'll think of other "pros and cons".
Top

Rik's comments about the advantages of a main lens + teleconverter are consistent with the fact that some macro lens designs are reported to be, for example, a Double-Gauss with an integrated teleconverter [or a teleconverter added as an external unit for close-up work]

IIRC one of the Canon Service Manuals for a pre-IS 100mm macro lens explicitly states that the optical construction of the lens is a Double_Gauss of c. 70mm focal length plus a built-in teleconverter.

Obviously Canon will have optimised the design of the whole system, including the teleconverter, to produce results which are competitive with alternative designs.

That implies that its perfectly possible for a teleconverter to produce no visible loss in quality if its design is matched to the lens to which its attached.
Feel free to edit my images.
Top

Interesting web site (the parts which I followed, at least).
Those with a Micro-Nikkor AF 200mm f/4D IF-ED will find it particularly revealing (Figures 26, 27..).
Top

In addition to all that's been said, the Vivitar 2x Macro Teleconverters offer one more level of functionality for macro photographers. In addition to the teleconverter itself, they offer variable extension between lens and teleconverter unit. They were designed to convert a 50mm normal lens into a 1:1 100mm macro lens, but they are compatible with other focal lengths as well. They are pretty much the only teleconverter I have any experience with and have served me well in various lens mount configurations.
Top
Post Reply Previous topicNext topic
11 posts • Page 1 of 1