This thread should be considered a partner of sorts to seta666's thread HERE.

The background story is that about 1 year ago, I purchased on eBay a used Mitutoyo objective, M Plan Apo 10X NA 0.28. When the objective came, I ran routine tests on it and found no obvious defects. It had the expected lack of CA, and while I was not particularly impressed by its sharpness, it was not obviously out of whack versus a Nikon CFI Plan Achromat 10X NA 0.25 (MRL00102).

I have not used the objective much, just a few occasions where its long working distance and/or lack of longitudinal CA was important.

Fast-forward now to a few weeks ago, when in the course of some tube lens testing I happened to mount up that very same Mitutoyo 10X and discovered to my displeasure that it didn't work very well with any tube lens I tried. When viewed at 50% of actual pixels (on a Canon T1i), the Mitty didn't look too bad, but at 100% it was not kind to the subject at hand. Here's an example, Mitutoyo on the left, Nikon CFI on the right.

After contemplating my options for a while, I finally decided to just bite the bullet and buy another Mitutoyo 10X of known provenance. So, off went the order to Edmund Optics. 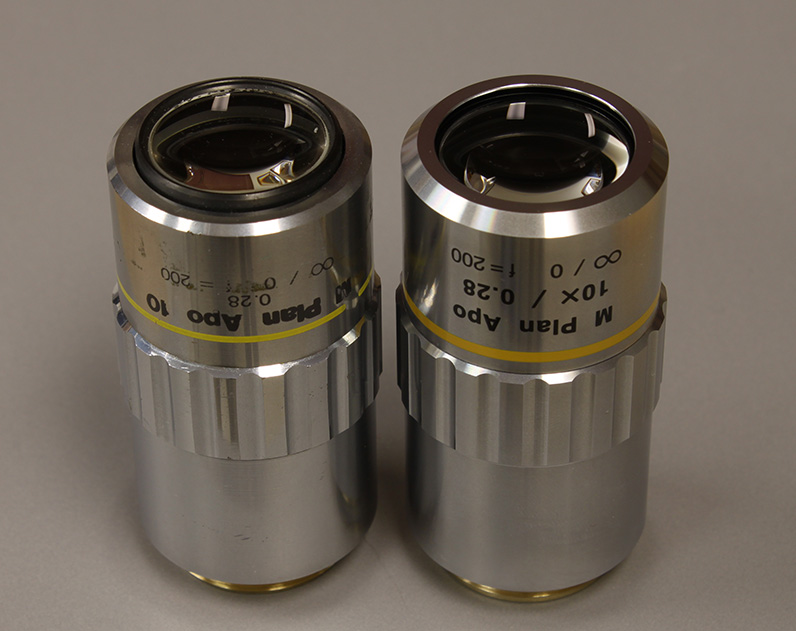 (BTW, switching the positions of the two objectives makes almost no difference in the room reflections.)

I've been wringing out the new objective for the past couple of days, and I have to say that I'm very impressed. Unlike the old objective, this new Mitutoyo is clearly sharper than my Nikon CFI (MRL00102) at image center, and it retains that edge to roughly the corner of an APS frame at 10X. When used at 5X with a 100 mm tube lens, the new Mitutoyo has noticeably softer corners than the Nikon CFI, but unlike the old Mitutoyo, it does not have the sort of astigmatism that causes Zerene Stacker PMax to produce cross-shaped artifacts.

Checking the limited number of stacks that I shot with the old Mitutoyo, I'm still not sure whether that objective degraded further while I had it. Even the earliest test images were clearly soft compared to the new objective.

For curiosity, I tried rephotographing the beetle and mite shown HERE. Of course I was not able to duplicate the lighting. From what I was able to do, it seems that the old Mitutoyo is similar today to what it was then (April 2012), while the new one is strikingly sharper.

Here are two stacks, shot back to back with only the objective changed, processed through Zerene Stacker DMap with no other processing other then levels adjustment, shown here at 100% actual pixels so you're seeing essentially what the objective did. 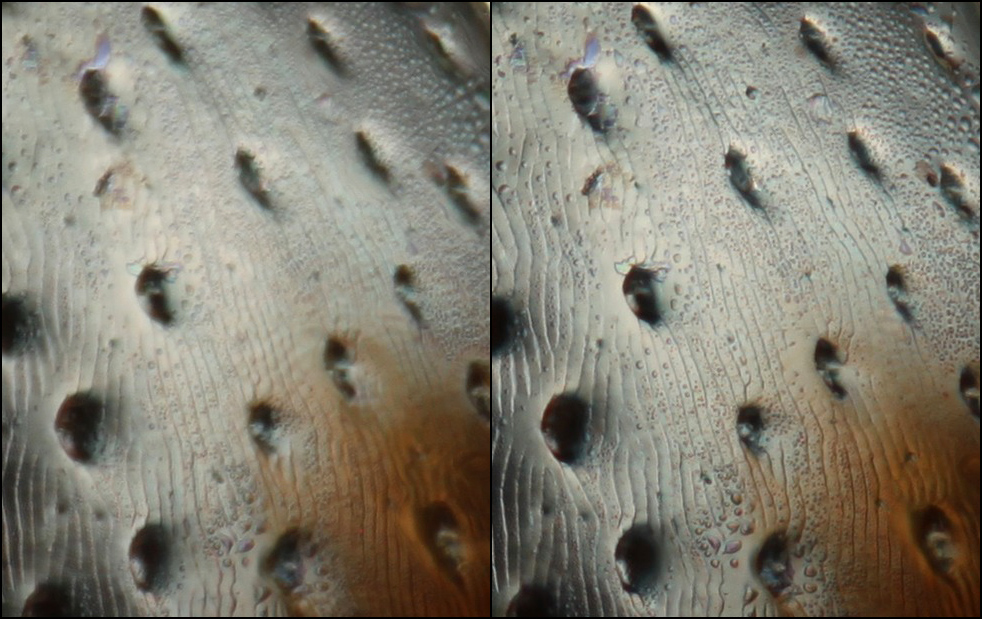 This whole affair is pretty annoying. I'm now thinking that the old sample was damaged before I received it, and while it may have gotten worse over time, I now consider all of my previous evaluations of the Mitutoyo 10X to be someplace between questionable and actively misleading. I offer most humble apologies.

No apologies needed, Rik. This could have happened to any of us. All of our lens tests would be more solid if we could control sample variation--but who among us can afford to do this routinely?

That said, what a difference!

Congratulations on your new lens.

In my opinion your old mitutoyo is not OK, the detail I was getting with my lens before I dameged it was on par with your new lens.
Also the corner behavior you describe is the same I had, mitutoyo has good corner coverage in FF but not perfect, nikon CFI has better coverage.

My guess is that performance may be on par or slightly better on the new design, but not that much.

Maybe Mitutoyo changed the desing to prevent the fron glass sticking out of the ballel, I guess the got tired of repairing accidented mitutoyos because that front element sticking out asks for trouble; also the new design barrel's may act as a short lens hood, catching less ressidual light so improving contrast

Damaged lens has developed astigmatism and other "beautiful and colorful" aberrations; even after removing the elements and puting them back together image can look Ok at 50%, at 100% it is obviously wrong. Reflecting subjects show strong halos (dust, bright scales, etc..)

My guess is that performance may be on par or slightly better on the new design, but not that much

It's not something I've recorded, but I'm sure we've noticed more than a couple of different Mitutoyo 10x designs over the years. My own ( from different magnifications), do seem to be of different "evolutions". The tattiest, by far, is not one which concerns me, but it's hard to know if they perform as they did when new..

It's coincidence that Chris_S brings up the old favourite, the Nikon 10x NA 0.3 CFN, which was perhaps the Standard Best objective before the infinites came to light. The thought "back then" was that resolution (central, anyway) increased with NA. Within my considerable experimental error, my own hotchpotch of lenses fitted the notion reasonably well.
Then the tests from Mitutoyos, and the new wonder, the Nikon CFI 10 NA 0.25, stirred the pot.
Several forum users will have one of the Mitutoyo 10x objectives, as well as one or both of the Nikons, ie 10x NA 0.25 CFI, or 10x NA 0.30 CFN. As we all will be wondering about the performance of our own Mitutoyos it is very useful to have this comparison with the new objective as a reference. Rik, does your archive show a comparison with ((your copy of!!..) the Nikon CFN?

Like many, perhaps, I've been off to the Edmunds site to check the price of a new Mitutoyo. I notice that Edmunds sell their "own version" range somewhat, but not much, cheaper. If anyone can illuminate the story on those, it would be interesting.
Top

Good catch. I have seen objectives damaged by dropping, freezing (yes, if you are using a low temperature rig and the temp control fails..."hey, why is my objective encased in a sheath of ice???") and well-intentioned cleaning attempts. And one case of someone using what was effectively motor oil for an immersion fluid (I kid you not). Perhaps the most insidious (aside from the notorious Zeiss 160 mm objectives "cooked" into delamination by an Ultrahot, erm, Ultraphot, lamphouse) is just element misalignment caused by simple trauma. Drop a nice 60/1.4 plan apo on the floor and it may not be the same lens when you pick it up off the floor. I swap lenses or nosepieces out of my scopes with a foam rubber pad under them to catch anything that might try to escape.
And as discussed, sans interferometer and the production jigs, there's no practical way to reallly diagnose/fix the specific problem(s). You can clearly see the degradation in resolution / contrast, but not the underlying cause. I'd like to think that some of the apparatus in the literature (e.g., Review of Scientific Instruments, SPIE Optical Engineering, JOSA-A etc) for characterizing objectives should be within reach of sophisticated home users such as the members of this forum, given how much equipment is available as surplus that used to be solely the province of well-funded labs. Then with a way to estimate the total aberration or extract the central and marginal NA or get an estimate of the MTF we would be able to avoid getting damaged optics on the used market. The main question in my mind is whethter or not that is superior to just using a well-characterized diatom slide, or mite or other test target. That's a subject for a new post....Meanwhile, I guess we just have to have our favorite test subjects and only get lenses with a return guarantee.

Congratulations on your new baby Rik!

I have previously detected differences in performance of various lenses (e.g., Canon 35mm f/2.8, 75mm Apo Rodagon D, Nikon M Plan 10/0.25, etc.) that I have had the luxury of testing in multiple copies. None of my results were as dramatic as yours.

My Mitutoyo 10X was purchased new some time ago, but not from a retail source. It came supplied in an orange box emblazoned with the Mitutoyo logo.

In appearance, the barrel looks like Rik's original, but the designated specifications are laid out as on Rik's new acquisition with the NA listed directly beside the magnification.
The yellow 'ring' is located closer to the knurled section as on Rik's 'new' version. 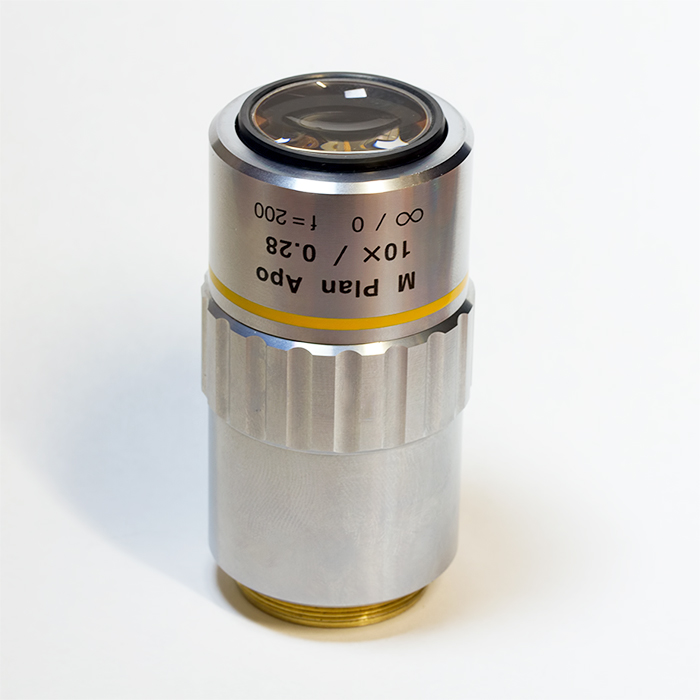 At the time of purchase I recall discussing with David the prominent 'Do Not Fall or Drop' warning on the container. It's okay if you 'fall', but protect the objective at all cost

Ironically, Edmund uses an older version of the Mitutoyo 10X objective to illustrate the Plan Apo series in their online catalog: http://www.edmundoptics.com/imaging/ima ... tives/1942

All of the Mitutoyo objectives that I own (2,5,10,20, and 50) have the front element protruding, rather than recessed. I can understand extending the barrel to provide mechanical protection, but I wonder if Mitutoyo made optical design changes in the whole series? And if so, if those changes were made solely to improve optical performance, or instead were needed to comply with new regulations about glass composition?

Definitely damaged. The only question is whether it's always been this bad while in my possession, or if I somehow messed it up or made prior damage worse. I have no memories of banging or dropping it, but I can't rule out some event that at the time seemed too small to take note. Suffice to say I'm a lot more sensitive now.

Makes sense now. I could never figure why you didn't like the Mits. I got excellent results with my 5x. After the debacle with the 10x Mits I could never afford to buy another one to replace it.

Congrats on the new lens.

rjlittlefield wrote:Definitely damaged. The only question is whether it's always been this bad while in my possession, or if I somehow messed it up or made prior damage worse. I have no memories of banging or dropping it, but I can't rule out some event that at the time seemed too small to take note. Suffice to say I'm a lot more sensitive now.

Maybe it's worth to ask Mitutoyo to take a look at it to see if it can be repaired.

nielsgeode wrote:Maybe it's worth to ask Mitutoyo to take a look at it to see if it can be repaired.

I continue with my doubts about these quality variations in high cost objectives. If I must to control the brand image of a recognized product of very high quality, I would never put in the market a lens with blurred texts as showing one of the objectives of Rik. Ferrari will not sell to their customers a car that does not have exactly the right color red indicated in its rules, but surely customers never would notice that minimal variation. This is caring brand image.

Are we sure that some of the objectives that we believe are Mitutoyo are not simply clones well imitated in some unknown workshop???

yes, is a disturbing ask...
Top

soldevilla wrote:Are we sure that some of the objectives that we believe are Mitutoyo are not simply clones well imitated in some unknown workshop???

Of course we are not sure. How could we possibly be sure?


I would never put in the market a lens with blurred texts as showing one of the objectives of Rik.

Neither would any sane counterfeiter. If someone worked hard enough to duplicate the barrel and the optics, it seems unlikely they would blur the printing.

Anyway, the blur on this lens is dirt and wear.