trouble getting past 5x

trouble getting past 5x

I am having trouble getting clean , sharp shots beyond 5x magnification with both the MPE65 and Bellows. Everything below it is very clean, crisp and sharp.

This image is shot using mpe at 5x, with exten tubes and raynox (150 and 250) . The settings used: Lighting continous lighting all around ie sides, and top and 3 led lights with ping pong ball as diffusers.

Would appreciate any advice to get past this hurdle 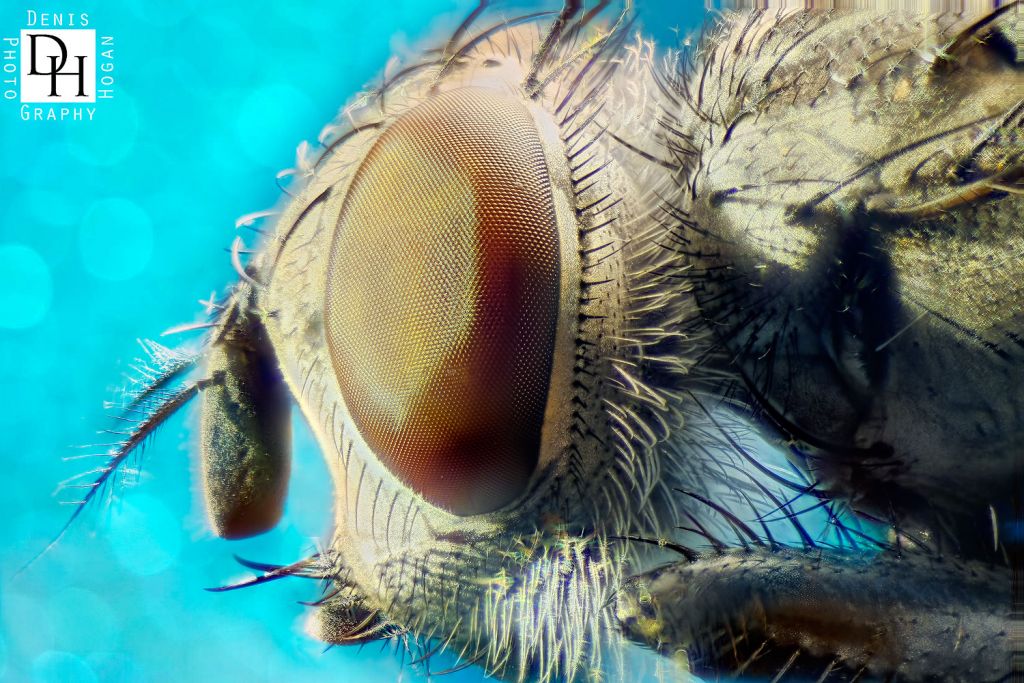 This image looks unsharp even at the small size that it's posted.

1. Aperture. At 5X and above, the MP-E needs to be wide open or just barely stopped down. Otherwise you'll get too much diffraction blur. Effective f-number = nominal f-number * (magnification+1), so the best you can hope for is effective f/16.8 at f/2.8 and 5x. That is only slightly into diffraction territory on APS-C, but you can see that if you stop down and/or use higher magnification, diffraction will be important.

2. Vibration. With continuous illumination and 1/5 second, your whole setup has to be vibration free and you need to be shooting with EFSC (exposure from Live View with no flash). For comparison, try a stack shooting with flash at close range and low power so as to get very short exposure times.

3. Diffusion. The image you're showing us has lots of bright highlights surrounded by bright streaks. That appearance strongly suggests that some or all of your illumination is not as diffused as it needs to be. By the way, the classic pingpong ball diffuser encloses the subject, not the light source. What matters is the angular size of the light source, as seen by the subject. I can't tell which way you're using yours.

I think I understand

1. Not sure I understand this or how to do achieve this as the fstop is showing 0 (zero) or do I set the MPE 1st to f2.8 then connect the ext tubes, that way the lens is wide open.

2. My camera setup is on tripod on stackshot. Perhaps I sit the rail on a solid block of wood. I do shoot in live mode and mirror lockup. Do you have an image how to connect a stackshot or rail to block of wood the correct way? I tried use a trigger/reciever and flash but it stopped working so I reverted to continous light

3. I will remove the ping ball balls off the 3 small led light and place a cone on the lens over the insects to act as a diffuser. Is that what you mean?

Yes, be sure the lens is wide open. That is its usual state if you've used it and then turned off the camera before removing the lens. To set the MP-E to any other aperture on bellows requires putting it on the camera first, turning the camera on, setting the desired aperture, then pressing and holding the DOF preview button on the camera while simultaneously unlocking, turning, and removing the lens. If you've never done anything like that, then the MP-E was probably wide open anyway.


2. My camera setup is on tripod on stackshot. Perhaps I sit the rail on a solid block of wood. I do shoot in live mode and mirror lockup.

Camera on tripod with continuous illumination at 5X is definitely inviting vibration.


Do you have an image how to connect a stackshot or rail to block of wood the correct way?

I do not have such a picture. Let your DIY skills be the guide. Note that the base of the StackShot is drilled and tapped to fit tripod threads, probably 1/4-20 and 3/8-16 (check first). Personally I'd be inclined to get a short piece of 2x4 lumber, drill up through it and fasten the StackShot with a bolt, then fasten the subject to the same piece of lumber so that the subject and StackShot would not move with respect to each other.


3. I will remove the ping ball balls off the 3 small led light and place a cone on the lens over the insects to act as a diffuser. Is that what you mean?

I will do as you suggested and see how my next lot of images come out.

Much appreciated for your help

In addition to Rik's advice. You've indicated you are using Live View; I'd like to determine if everything is set for optimal results. You don't need to use Mirror Lockup if you have enabled Live View and selected Mode 2.

Odd question, what is the floor of your 'studio' made of?


Do you have an image how to connect a stackshot or rail to block of wood the correct way?

Here is an example, but no timber was used during construction. This is a setup I was working on some time ago, but I eventually replaced various components and went with a more refined, alternative arrangement.

The following images (taken rather quickly during an email exchange) were recorded during the concept exploration phase. 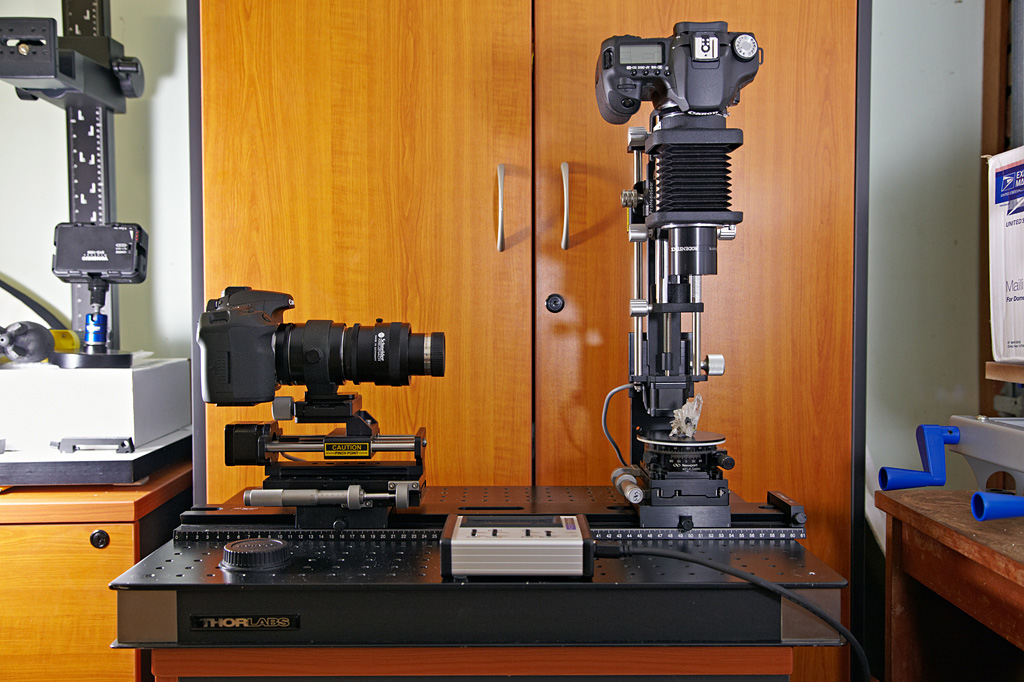 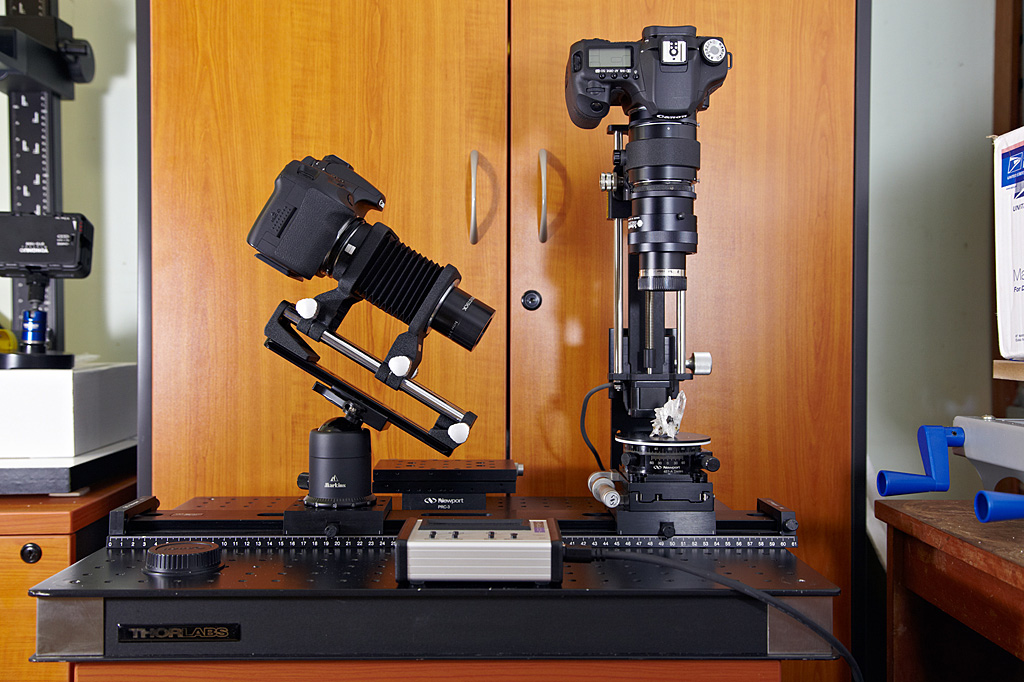 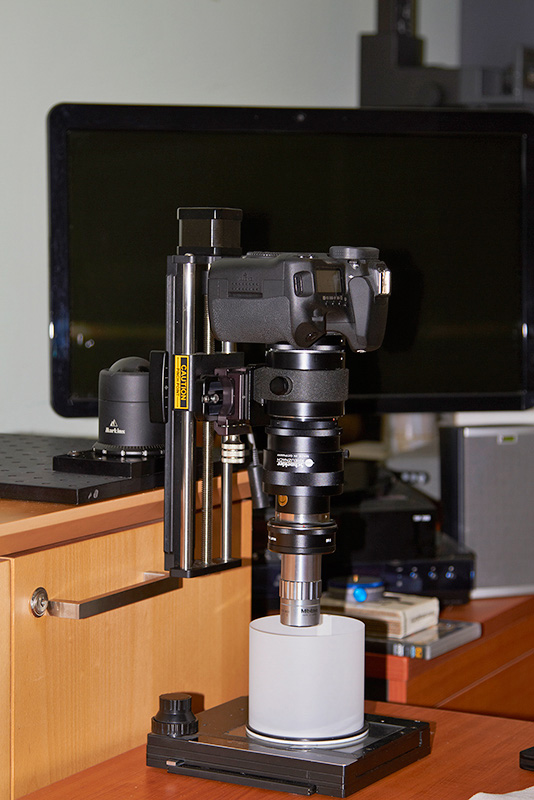 thats awesome. I would have to sell my home and kids to get that :-)

thats awesome. I would have to sell my home and kids to get that :-)

An additional point not mentioned in my previous post:
Are you allowing sufficient ‘settling time’ (Tsettle) between exposures? This is set via the StackShot controller under the Config menu. I normally allow 5 seconds.

*Turn off Mirror Lock Up via the DSLR menu, you don’t need it if working in Live View.

Start by adjusting those two settings (possibly three) and then we can further assess vibration concerns if they are still evident.

When you are set up and ready to go, select magnified Live View 5X or preferably 10X. Are you seeing any non electronic movement of the subject on the LCD?

That's a lot of settling time! I normally allow one second, and am sure I don't need all of it (though my rig is quite different, mechanically). It adds up--losing four seconds per shot adds 20 minutes to a 300-shot stack.

Craig, do you find that your rig actually takes this long to settle?

I find 5 seconds to be a good settling time. Tsettle can be decreased or increased; at present we are troubleshooting the vibration problems Denis had mentioned.

There was a point to the question, Craig. Five seconds might be an appropriate settling time for a trampoline or diving board, but a macro rig that bounces for five seconds after a focus increment has serious mechanical issues. As Denis devises a way of connecting his camera and subject, he'll likely be best served by having workable rules of thumb in mind. "Settling of under a second" is a very workable rule of thumb; "Settling of five seconds" is an indicator of problems.

Denis, there is no single "correct" way of attaching a Stackshot and subject holder to a base; each person does it differently. Craig's approaches and my own are rather fancy, but Rik's thought about using a 2x4 piece of lumber has a lot of appeal. It could be done quickly and cheaply, and ought to work pretty well. The key here is to tie your camera and subject together mechanically, so that anything that causes one to move also causes the other to move in the same way, even if that motion is too small or rapid for you to see it with your eyes. This can greatly reduce the relative motion between camera and subject, which is the only kind of motion the camera sees. As time goes on, there are lots of ways to improve on such a simple approach--but if you build something fancier, you'll only be out the cost of a 2x4 and a handful of bolts--probably under $5.

The point I was making was to set in place a conservative approach, cast a reasonably 'broad' net and then refine settling time down from that point. If problems exist at 5 seconds, then yes, we are most likely looking at the "trampoline" analogy, so we know which area of the setup to begin addressing. It's a classic if/then/else/goto approach.

I can't see how you are working with 1 second on a Nikon given all the internal mirror/shutter flapping and slapping in addition to allowing for possible external mechanical vibration occurring during incremental focus block movement between exposures. Obviously we are calculating by different criteria. I am basing my numbers on overall incremental exposures, not just Tsettle, whilst it would appear your procedure more accurately specifically addresses Tsettle only. I'm glad you've provided an opportunity for me to clarify.

The 7 second (effective) 'window' also allows time to assess the output. There may be some type of interference occurring during the process and a longer settling time provides an opportunity to intervene or cancel the process.

Hopefully this to and fro isn't causing confusion or undue concern for Denis.

Again, I emphasis, this is primarily a trouble shooting exercise, not a discussion related to best practice.

When I wa working at aout that magnification, with a tripod, mirrorless camera, daylight exposure, I found an 8 second delay too short for things to settle down even when I left the room after firing the shutter (for delayed opening via self-timer). My exposures were more like 1/15 second. The floor is decking screwed to concerete.

Harold
My images are a medium for sharing some of my experiences: they are not me.
Top
Post Reply
13 posts • Page 1 of 1