Periodically we have discussions about false color, surface properties, lens selection, illumination method, and the interactions between those.

This post is to provide a few reference images to talk about.

First, here are the subjects: a brushed stainless steel ruler and a U.S. dime, both of them tipped backward so as to be severely out of focus at top and bottom of frame. 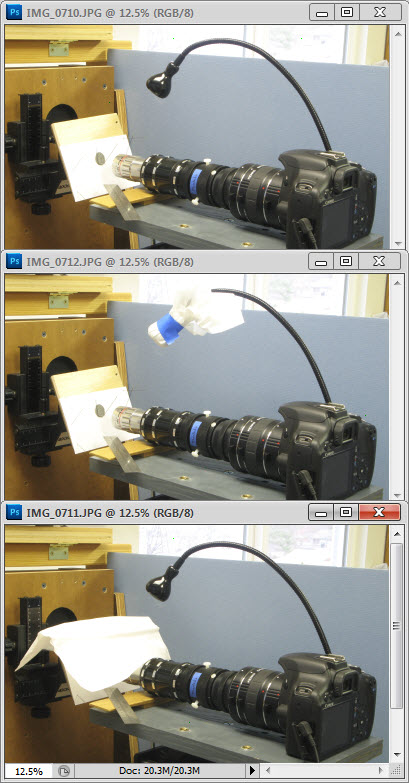 Third, we have lens choices. Shown above is a Mitutoyo 5X Plan Apo objective with a Thorlabs ITL200 Apo tube lens. Not shown is a JML 21. Both configurations are known for lack of CA, both lateral and longitudinal.

Finally, here are the resulting images.

1. This is the brushed stainless scale, shot with the Mitutoyo/Thorlabs apochromatics. Despite the "obvious" difference in DOF, these images vary only in illumination method -- no change to optics, aperture, focus, or anything else that I recognized might be an issue. On the left is undiffused, middle is diffused at the lamp, and right is diffused near the subject. The scale here is 50% of actual pixels. 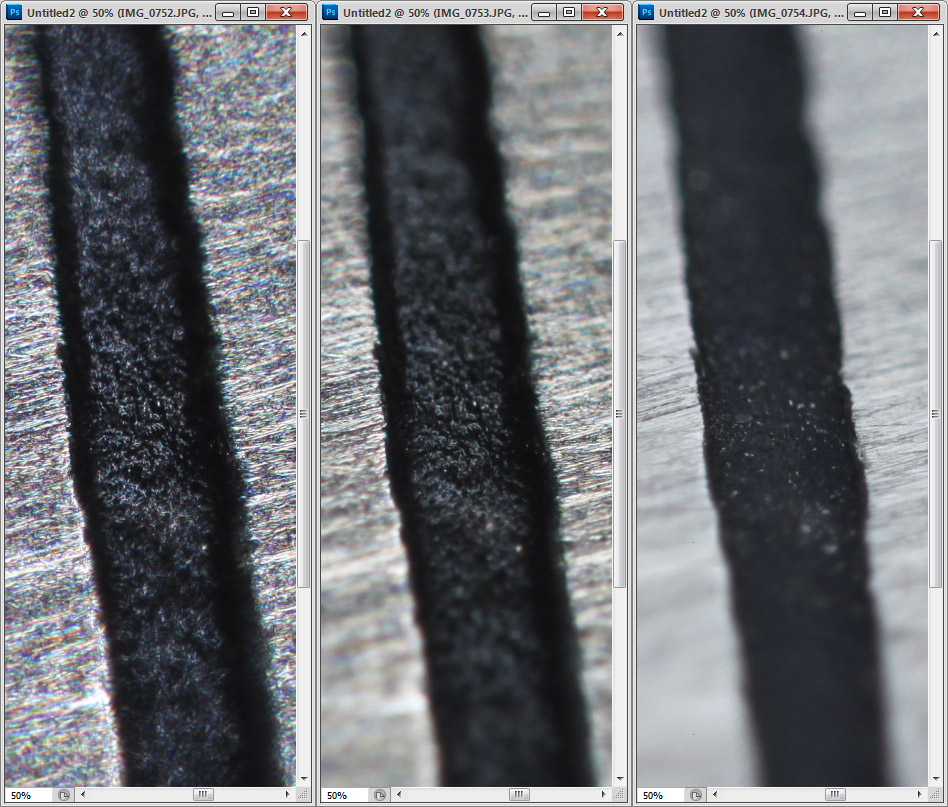 2. This is the dime, again shot with the Mitutoyo/Thorlabs apochromatics and with only illumination varying in the same way. This is 100% of actual pixels. 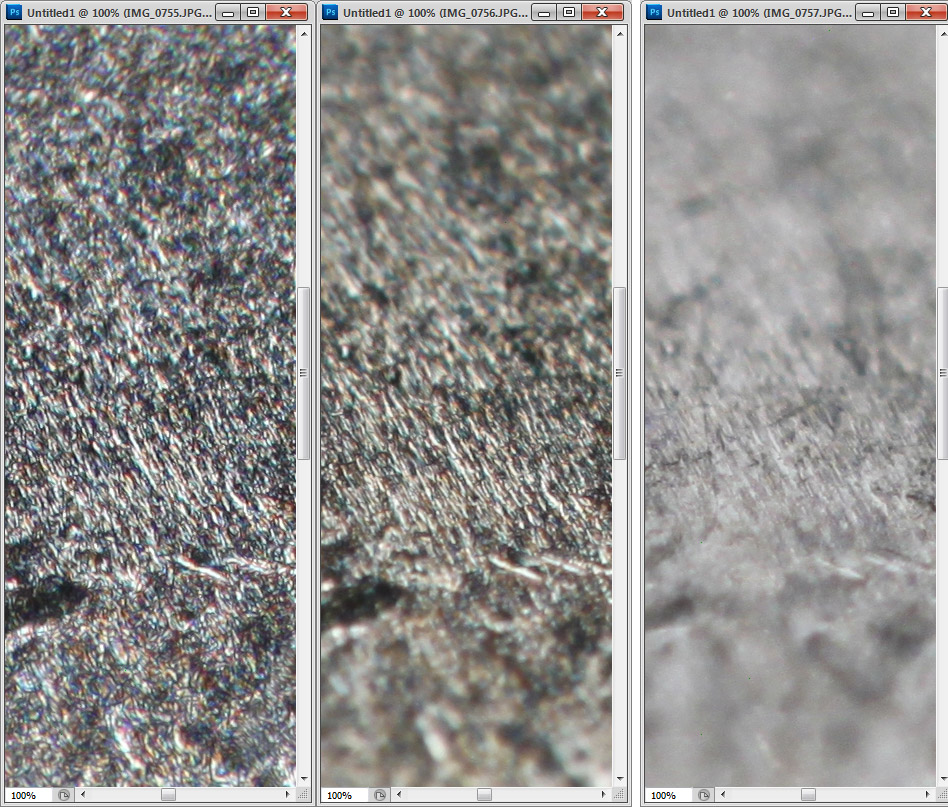 3. This is also the dime, this time shot with the JML 21 and with one additional tweak. The first two frames are with undiffused illumination and a focus tweak; the last three have same focus and vary only in diffusion. 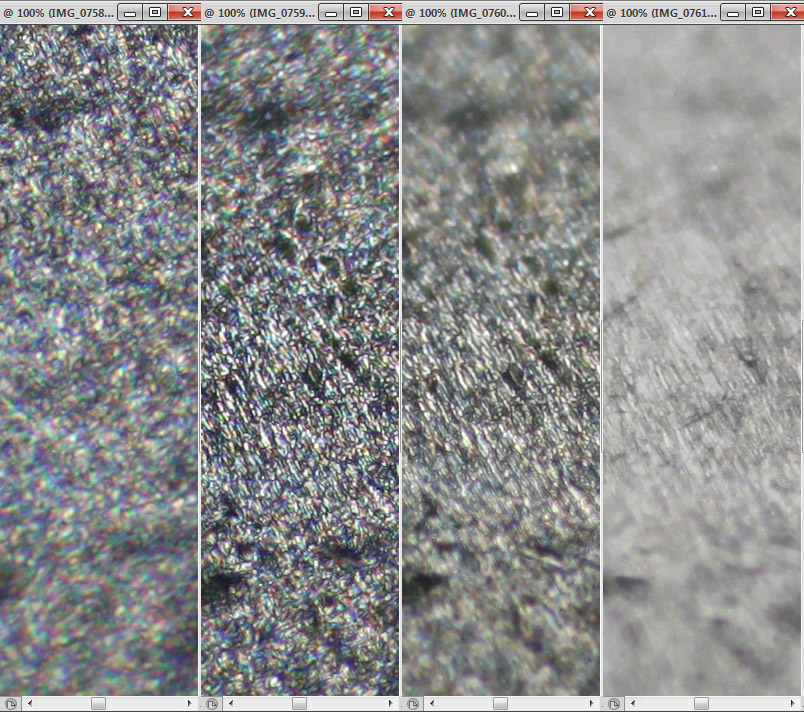 In looking at these photos, three aspects jump out at me.

First is the striking increase in apparent DOF when highly directional illumination is used. I'm not sure what's going on there. I speculate that each part of the surface is predominantly "seen" by only part of the lens aperture, whatever part happens to catch the specular reflection of the highly directional light source. This would effectively stop down the lens, with the added bizarre feature that different parts of the subject will be seen through different parts of the lens aperture. That would also explain an interesting effect (not shown here) in which OOF features appear to move around in strange ways as focus is changed.

Second is that without quite a bit of diffusion, OOF areas are full of colored junk that looks like detail but isn't really. In the last montage, you can see that in the zone where the first two panels are equally OOF (about 1/3 of the way down), there's essentially no correlation between "detail" in one and "detail" in the other.

Third is that false color abounds, even or especially in out-of-focus areas where there is no subpixel detail to cause local sensor overload or Bayer effects.

I will be interested to hear other impressions and thoughts.

I'm amazed by these results and cannot see a connection between DOF and using diffused light.
The method of diffusion that I like to use often --placing diffusor near the object and far from the lightsource-- only gives me less DOF?
Don't know if it's a problem when stacking , but still very peculiar.

By the way I have said it before and will say it again: I like your investigative mind, Rik.
As much as I like to, I can't help you what's going on here...
Fred
Canonian@Flickr
Top

Very interesting. Thanks Rik. Time to play with my diffusers I guess.
I'm in Canada! Isn't that weird?
Top

Very interesting comparison and results Rik. Oddly enough I can't reproduce the same results as you.
In the image below the top part is diffused with a tissue, the bottom part is not, just the bare Jansjo. The ruler was angled at approx 30 degrees.
Maybe this phenomenom only happens with lenses that have an extreme shallow DOF ?
By lack of a Mitu I used the lens that was already mounted: a reversed Schneider-Kreuznach Componon-S 50mm F/2.8@5.6 enlarger lens on 29cm of bellows.
Focussed on the 71 mm mark. Can't see much difference in wider DOF or sharper OOF regions. Apples and oranges perhaps ? 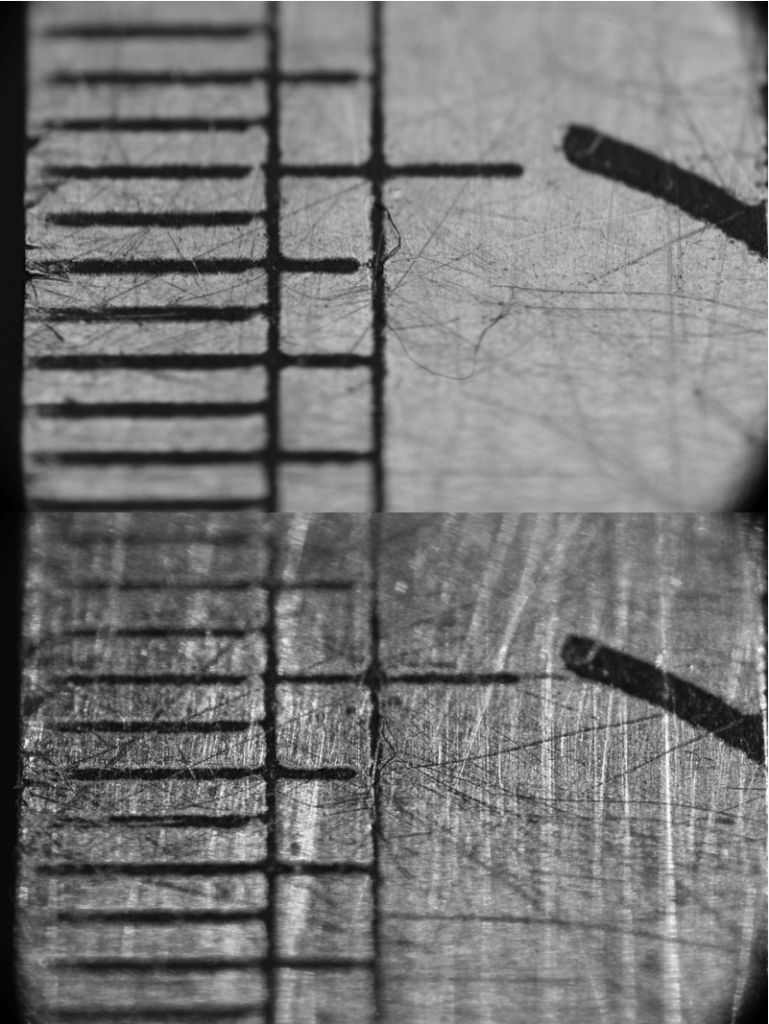 Adding to the amusement...

Here's an animation showing what the camera sees as focus rocks back and forth through one small area of the dime. This is looking through the Mitutoyo/Thorlabs apochromatic lenses, with undiffused illumination from the JANSJÖ.

Trying to stack something like this can produce a wealth of really interesting "detail", but you have to wonder how faithful any of the renditions are, when the fine details are squirming around like that.

Adding some diffusion helps a great deal. This is with tissue paper wrapped around the head of the JANSJÖ.

Here are Zerene Stacker DMap results for both cases. I'm actually surprised by how much consistent structure ZS was able to pull out of the undiffused case, but still I would trust the diffused one much more. 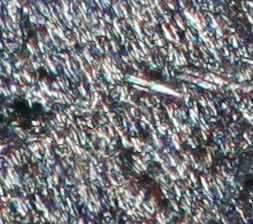 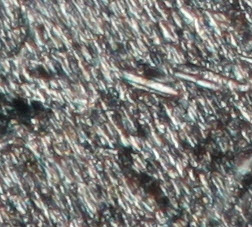 The first animation is really trippy. I've seen this behaviour while focussing back and forth on some 10mm microfiche lenses (OTOMAT) with very shallow DOF. Focus is going everywhere.
The focus on the diffused, second GIF is a lot more ordered than the undiffused one.
There must be some optical explanation for this that I can't grasp.
Fred
Canonian@Flickr
Top

No doubt, since the results are apparently much different. But exactly how, now that's the big question!


Maybe this phenomenom only happens with lenses that have an extreme shallow DOF ?

There's probably also some component of how the illumination is arranged with respect to the surface. In this case I had mine set up so that the surface was bright, which of course means that the light was close to mirroring off the surface into the lens. I can imagine the results would be much different if the illumination were more oblique.

This is reallly interesting !
Top

Rik...your results exactly match my experience with coin photography. I try to get my lights as close to axial as possible without causing direct reflection, and this puts a lot of nearly-direct light into the lens.

One thing that some of the coin photographers swear by is that LED's produce far more of this effect than other sources. I explained this away with my "source size" argument, and the solution was diffusion. But I do often wonder is Jansjo and other LEDs have a spectrum (or a component) that could cause more local overload. I suspect not but thought it would be worth mentioning.

Your extreme cases of tissue over the light vs tissue over the subject are quite extreme. For reference, I've found that spacing my diffuser such that it is approx 100mm from the subject (coin) and with the light roughly 25-30mm from the diffuser gives the best tradeoff between local overload and loss of reflective character that minimizes luster presentation. Luster is an important element of coin eye appeal, and is something that I must pay a lot of attention to. Full diffusion makes the coin look "dull"...

Starting to see more similarities now that I'm also using the JML 21mm.
The scratch that is running from top-right to bottom-left is showing more definition on the undiffused Jansjo shot (top) than the bottom one where using a tissue diffuser.
I'm not shure this is a good A/B comparison, I guess the scratch is reflecting more specular light when the Jansjo is undiffused, but still looks more within DOF. 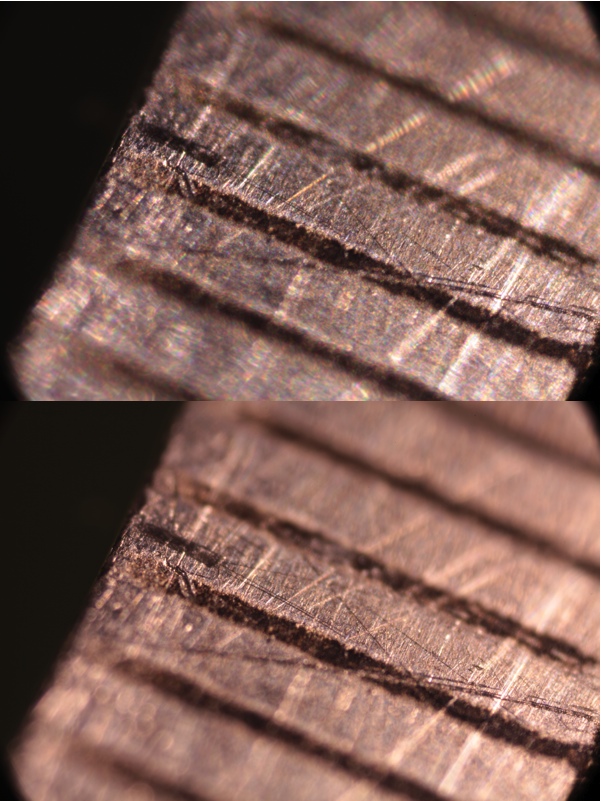 ray_parkhurst wrote:...I try to get my lights as close to axial as possible without causing direct reflection, and this puts a lot of nearly-direct light into the lens.


So the results of coin photography would improve by using EPI objectives or a ringlight ?
Fred
Canonian@Flickr
Top

ray_parkhurst wrote:I explained this away with my "source size" argument, and the solution was diffusion. But I do often wonder is Jansjo and other LEDs have a spectrum (or a component) that could cause more local overload.

I agree with the "source size" argument.

I assume the "local overload" explanation is the one you outlined HERE:

The guys over on my coin photography groups call it "red and blue sparklies" and it seems to be due to local sensor overload. On coins, this is caused by high amounts of luster being present. Luster is specular reflection off the metal grain structures caused by metal flow, with nearby dark areas where the light is scattered by off-angle reflection. The grains are physically small, and present full-brightness specular reflections to the sensor that are sub-pixel in size. These cause local sensor overload in the R or B sensors, and create what I assume is a similar effect to "false color" in moire patterns.

That explanation sounds plausible on the surface, but I'm skeptical whether it's actually correct in most cases.

There's a simple test that can help figure this out. Just see if the color goes away when you shoot underexposed. If the problem is caused by sensor overload, it should disappear when the exposure is dropped enough to bring all sensor levels well below max.

Here's what happens when I apply that test to the undiffused Mitutoyo/Thorlabs setup discussed in this thread. I've shot underexposed and then applied a levels adjustment in a small rectangular region so that we can see what happens. 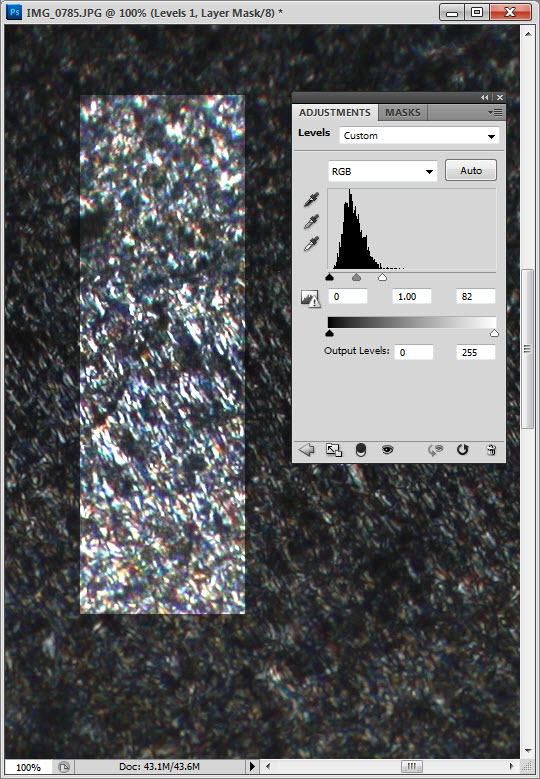 As you can see, the colors do not go away even when the exposure is dropped far enough to put the maximum pixel value well below half of maximum.

Personally, I suspect that most of the false colors attributed to overload are actually due to other diffraction/interference effects that unfortunately do not lend themselves to simple explanations.

I would be interested to hear the results of the underexposure test applied to your coin setups.

Seems reasonable, but I remember doing a similar test about a year ago, and had to drop the exposure by 3 full stops to eliminate the problem, which had deleterious effects on the overall image. The resulting color changes may have been due to other factors.

I'm reminded now of viewing metal samples under a microscope using axial lighting, and seeing these same types of specular color effects, but with my eyes, not a camera sensor. That would point toward the effect being purely optical. I suppose the question then is if these artifacts show up in the camera viewfinder, or do they only show up when the image is digitized?
Top

I see these effects all the time working under a scope at high magnification with reflected light. The solution is always the same -- add diffusion to the illumination. I used to think that the colors would go away if only I could get sufficiently good lenses. But now that I have the Mitutoyo's and I'm still seeing these colors and wiggles, I'm coming more and more to think that they're intrinsic to the way the light works.

Intriguing stuff. It looks like a similar effect we get most easily with objectives with inadequate working distance, and strong side light.
It's quite spooky with a 100x WD 1mm objective, NA 0.9 .
I remember the highlights appearing to be displaced away from the source of the light. As you move the light around, sparkly features "from" the subject move around. Mentioned some time ago and put down as "one of the mysteries"! It gives the impression that there's an image in fresh air, or formed on the surface of the glass, or like a comet's tail on the opposite side from the sun. I sort-of put it down as flare. I've just been looking for images but I doubt I kept them.

Perhaps you could see next time you're set up. It might be a completely different thing.