I recently had an opportunity to do some hiking in the north part of Yosemite National Park, around Lake Vernon above Hetch Hetchy Reservoir. The area is mostly glacier-polished granite. I had never been there before, and I'm not very familiar with the material either.

In walking over a few sections of rock, I was surprised to see thumb-sized regions of the rock surface flashing at me. On closer inspection, it turned out that the flashing was caused by the sun glaring off unusually flat and shiny crystal faces. Typically only one eye would see the glare at a time, and of course moving my head a few inches would make it entirely invisible.

Here are a couple of animated gifs that illustrate the effect. Each animation is made from two pictures shot from slightly different viewpoints, overlaid and auto-aligned in Photoshop.

This one was in an area whose glacier-polished surface was only slightly eroded:

This one was more severely eroded, as you can see from the closer crop that follows. 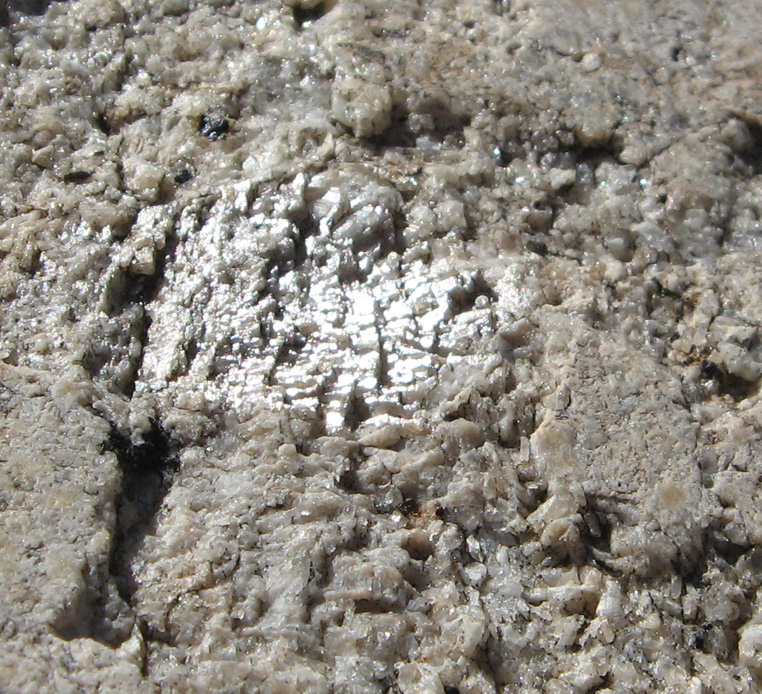 For context, here's the view from eye level: 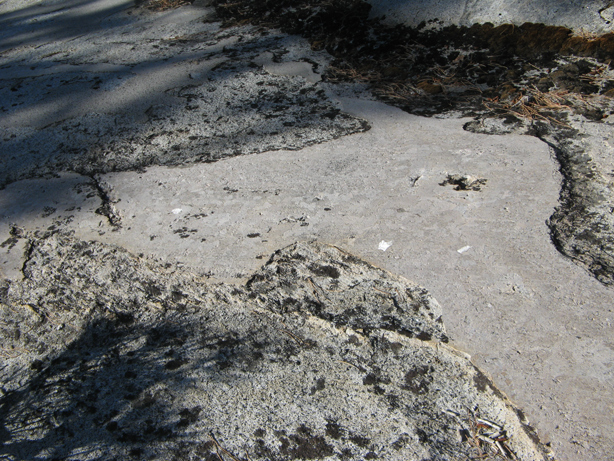 It appears to me that the reflective surfaces are crystal faces that all have the same orientation, exposed by weathering. I have no idea what sort of material or crystal structures erode like this. If anybody else knows more, I would appreciate learning!

Camera: Canon A710 IS, no attachments.
Top

Those are feldespar big crystals, likely orthoclase or albite (or more likely a perthitic asociation of both). Not exactly crystal faces but cleavage planes that are families of infinite parallel planes where the mineral breaks. Because all in each family are parallel they reflect the light exactly at the same angle. In the last image you can see that there are three cleavage planes almost perpendicular, typical of feldespars, a main component of granitic rocks (I never had the pleasure of visit Yosemite, but the main rock is granodiorite as published in many books).

If you want I can post a petrographic micrography showing those planes.

Pau, thank you for the information. It is exactly what I was hoping for. Sure, post whatever else you think would be interesting.

Granodiorite, yes. In the Geologic Map of the Tower Peak Quadrangle (2000), Lake Vernon is shown at the extreme lower left corner of the map. According to my GPS track, the place I was standing was just off the bottom of that map, roughly centered on the E in "R. 20 E." That would place it roughly on the boundaries of the zones Klv and Kbu, which the map describes as follows:


Klv -- Granodiorite of Lake Vernon (Cretaceous)—Hornblende-biotite granodiorite characterized by bimodal grain-size distribution of mafic minerals, with scattered grains 5 mm to 1 cm in size, and abundant grains 1 mm in size and smaller, giving the rock a "spotted" appearance. Contains numerous flattened mafic inclusions. Equivalent to granodiorite of Tueeulala Falls of Dodge and Calk (1987), part of granodiorite of Boundary Lake of Huber (1983), and part of the quartz diorite of Mount Gibson of Kistler (1973)

Kbu -- Granodiorite of Bearup Lake (Cretaceous)—Even-grained granodiorite characterized by euhedral hornblende and biotite crystals and with a wide range in mafic mineral content. Equivalent to part of quartz diorite of Mount Gibson and part of granodiorite of Double Rock of Kistler (1973)

In the Geologic Map of the Hetch Hetchy Reservoir Quadrangle (1973), these two zones are bundled together as Km and described as

The polished and eroded surfaces were very interesting to me. It seemed that the glacial polishing process had left a sort of hardened "shell" on the rock, about 1/4" thick. In many areas there would be large expanses of almost intact polished surface, interspersed with places where the shell had peeled off leaving a rough surface beneath as shown here. 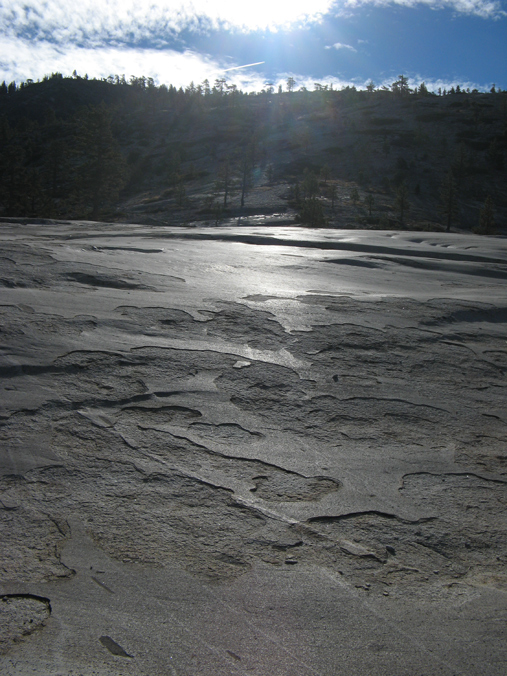 In one place this weathering process was particularly clear, with numerous chunks of the "shell" having broken off and washed onto intact areas. 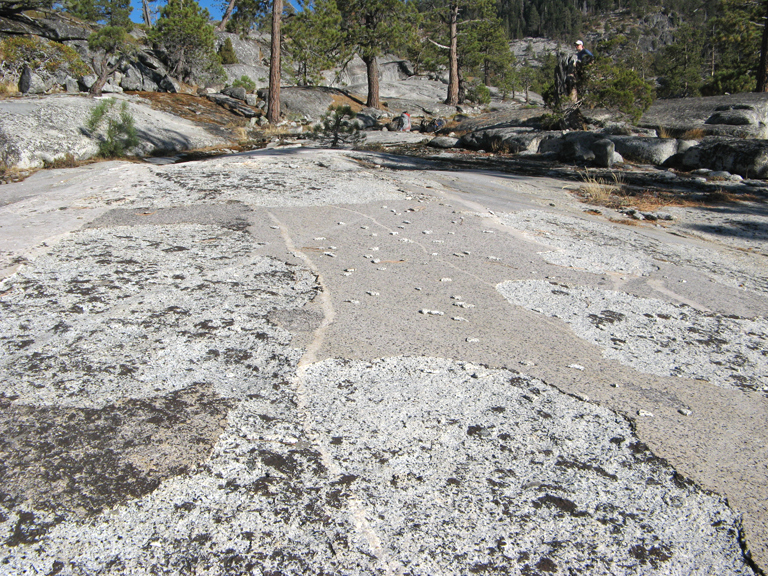 We were intrigued to note that almost all the broken pieces had come to rest with the polished surface flipped down. Apparently they had been there for some time, as the underneath flat surface of the broken pieces had significant deposits of something crumbly. I don't know whether that was mineral or biological.

Rik, thanks for the follow up and the landscape images.
The altered surface at the last image is chemical, usually a both biological and inorganic, while the rock exfoliation must be mechanical both for expansion when the rocks placed over it are eroded and all that weight removed and due to the thermal contraction and dilatation of the rock, of course lately favoured by the ice expansion when the water at the cracks froze.

Here you have the micrographies of thin sections. I don't remember the lens or magnification, I tink I placed a bellows over the polarizing microscope and a Zeiss Luminar at the nosepiece.
Orthoclase showing cleavage and fractures 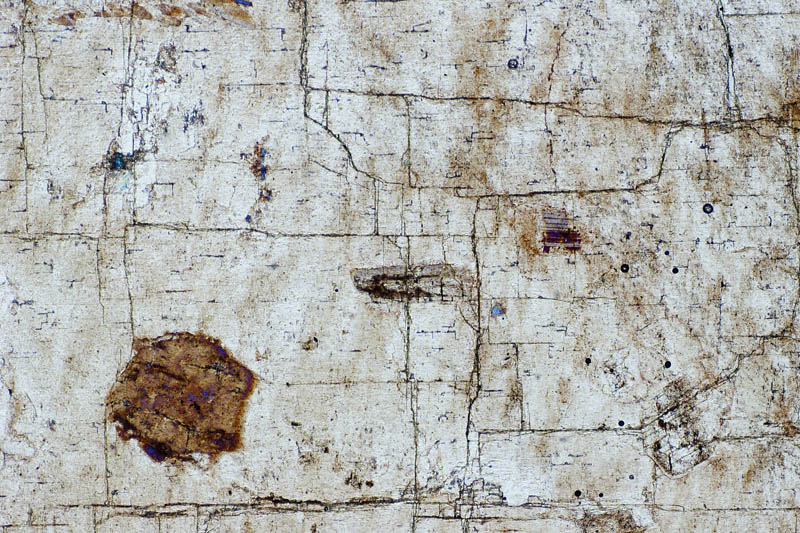 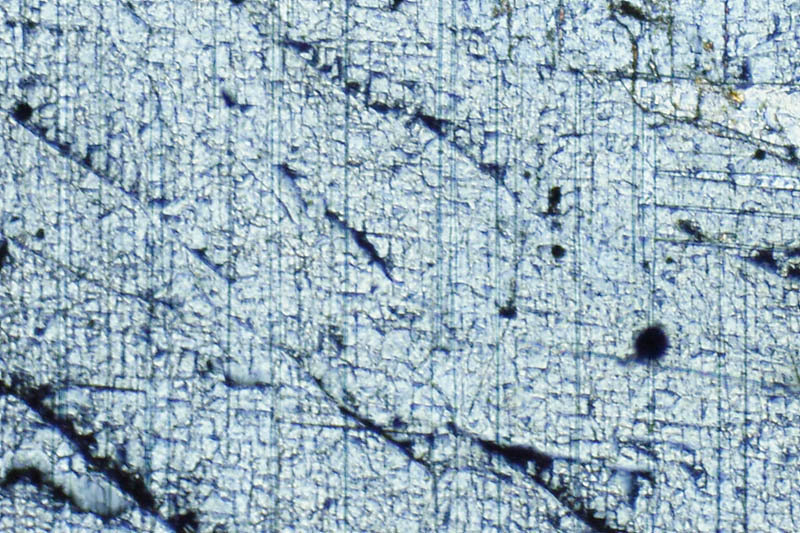 Pau, thank you for the photomicrographs. The nearly perpendicular cleavage planes are very obvious.

I am intrigued also by the hexagonal dark crystal in the upper image. There were a lot of similar appearing crystals in disaggregated material at our campsite, and elsewhere embedded in larger masses of rock. The first crystal I found on the floor of our tent was so isolated and symmetric that at first I thought it was a manufactured part.

What is the hexagonal crystal?

The hexagonal dark crystal in my image is biotite mica, but in base of your short description, I think the crystals you found may be hornblende amphibole because mica has a so easy cleavage* in fine sheets that is very difficult to find isolated well formed crystals ,and hornblende is a common mineral in granodiorites. Where them black prisms with romboid faces?

*just one cleavage plane parallel to the image plane in my picture, so not shown in it.
Pau
Top
Post Reply Previous topicNext topic
6 posts • Page 1 of 1