This critter has taken over a part of our flower garden for its personal hunting grounds. 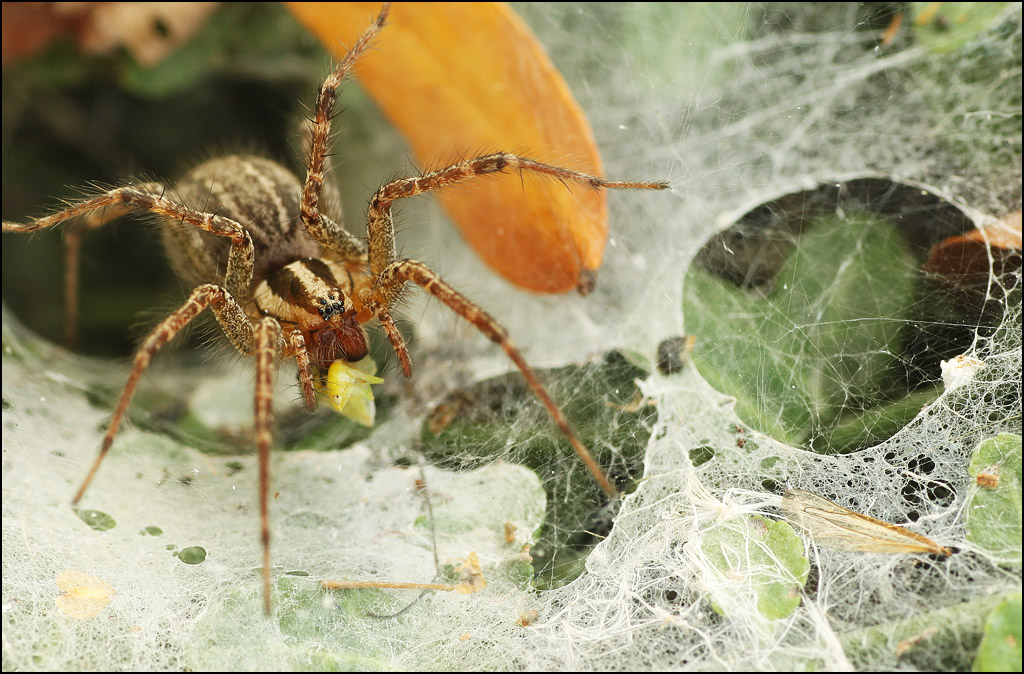 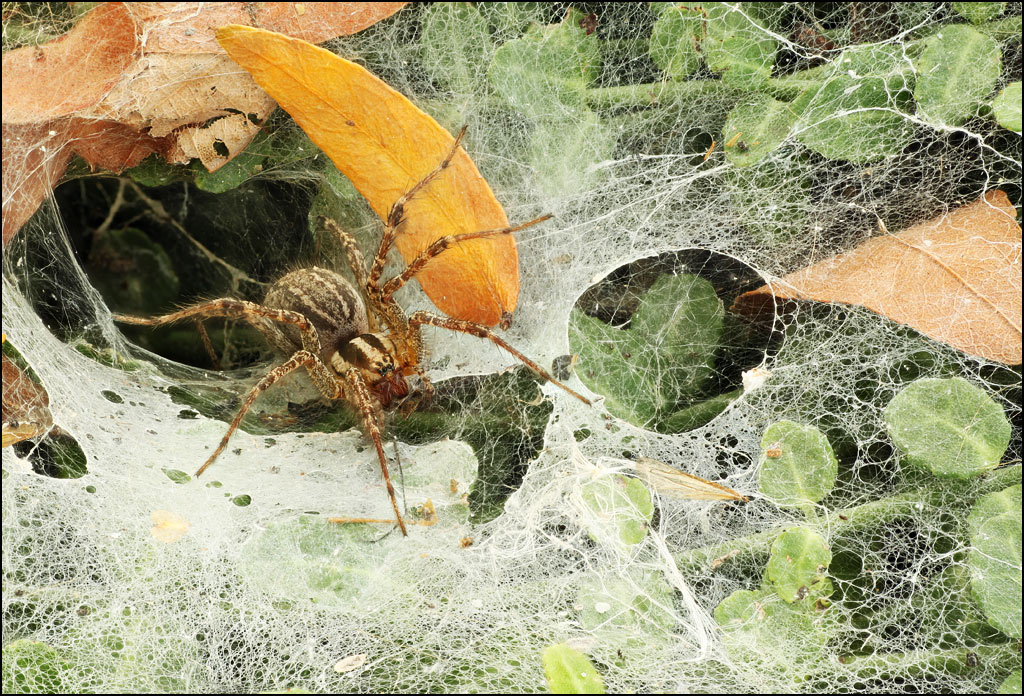 A closer crop of the above: 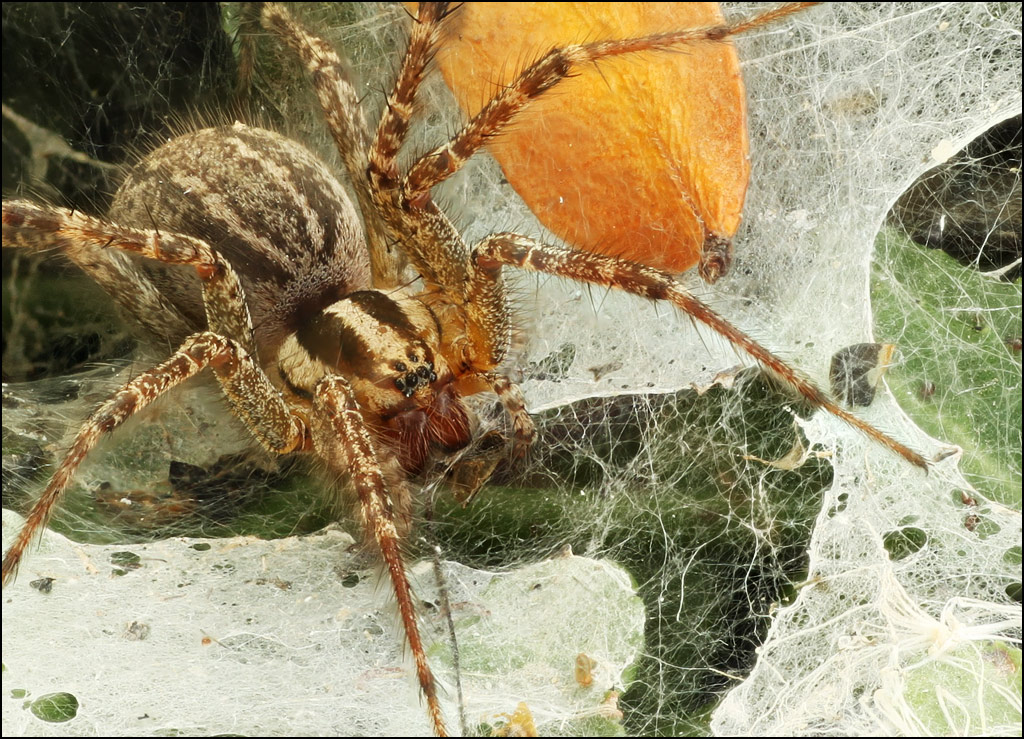 The focus stack was automatically acquired using the Magic Lantern firmware add-on, 3 min 4 sec for 37 frames (5 seconds/frame), no tethering required. StepSize 2 with1 step per frame. The spider did move during the stack, but only while it was out of focus and I was getting the rest of the foreground where the spider wasn't. This made it easy to get a clean composite by Stack Selected and retouching in Zerene. The composite is mostly PMax, some DMap in areas where the brights were haloing.

Here's the setup. The tripod is a Manfrotto Pro 055XPROB with a Manfrotto 410 geared head. It's great for this sort of work because the geared head lets me dial in exactly the framing I want, even though in this case the camera is standing back well over a foot from the subject. 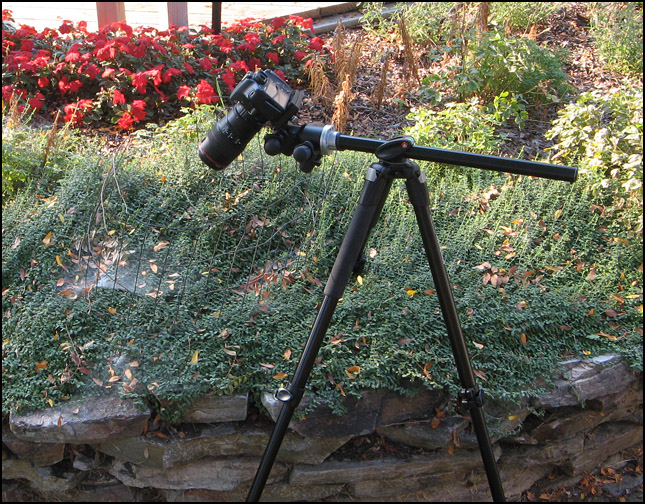 Excellent results Rik and great use of Magic Lantern....and Zerene.

I would be interested to see the difference between a single exposure and the stacked result. Did you try such a thing?

Later edit: I meant comparing the exact scene - the stacked one and a single exposure around f11 or so.
Cristian Arghius

Craig, it's approaching fall here and there is no shortage of nicely colored leaves from my large locust tree. Very soon now that spider's web will be covered by a mat of them. As for Magic Lantern, I'm becoming quite fond of that beast, but I do have to say that the learning curve feels like climbing a cliff. The user interface is pretty complicated and for me not intuitive -- lots of mode switching required to set up the operation. So of course I wrote a procedure for myself and posted it out as a Zerene Stacker tutorial.

Cristian, perhaps this comparison will help? At this scale the difference is not striking. At larger scale of course most of the single-frame image is blurred, while almost all of the stack is sharp. These are at nominal f/8, but with the TC and magnification the effective aperture is a little narrower than f/11. 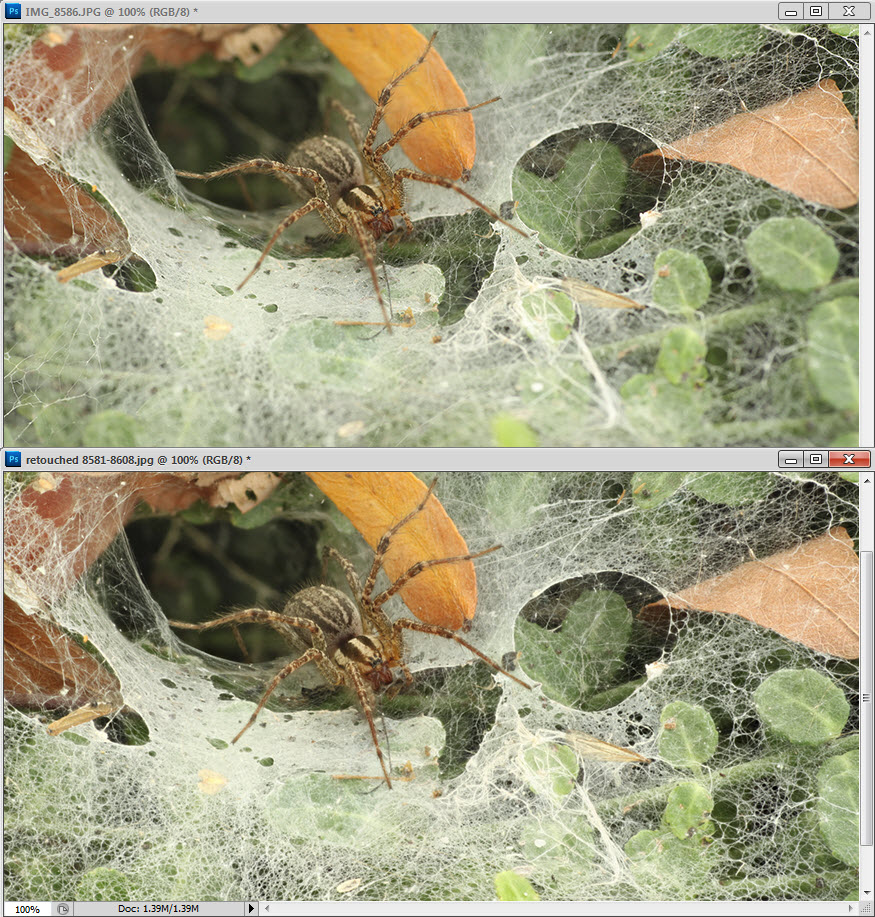 Looking at the images again this morning, I think I shot the stack too deep. If I just remove the rearmost 9 frames to make a 28-frame stack, then the narrow tunnel of the web goes blurred as shown here and gives a better impression of depth. I like keeping all the front sharp, so the foreground works well for me as it is.

By the way, in the single shot at the top of this thread (first image), there's a lucky positioning of spider and web that scatters areas of sharp web around the bottom of the frame when focus is placed on the spider's eyes. That looks pretty good to me. But in the "waiting for prey" stack the camera and spider positions are a little different and that nice focus arrangement does not occur. In the frame where the eyes are sharp (shown above, frame IMG_8586), almost everything in front of the spider is blurred and I don't like that so much.

Great capture Rik!
You had me worried for a moment,
I was thinking it maybe a funnel web from Sydney Australia,
They say, "how can you tell?", answer, "even the floor shakes!"