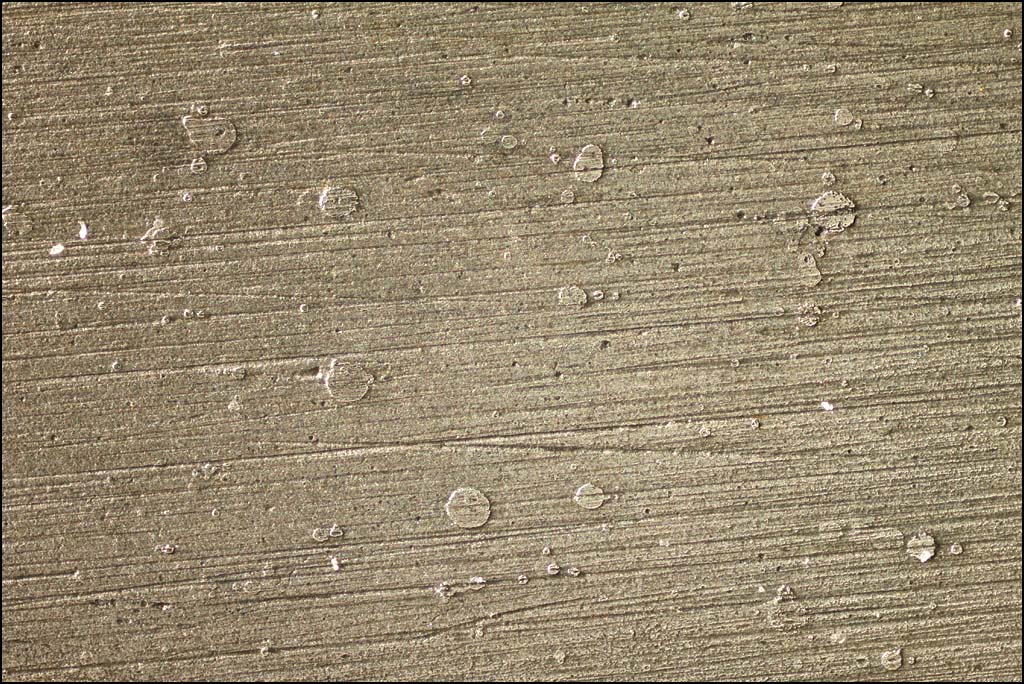 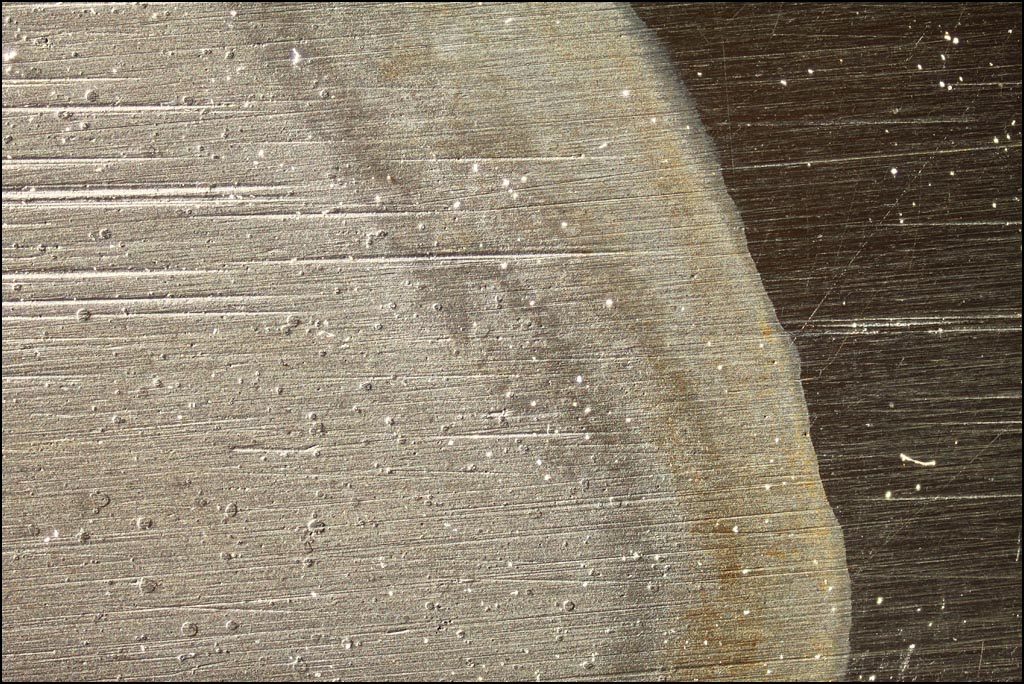 And wider yet (38 mm field width), with different lighting: 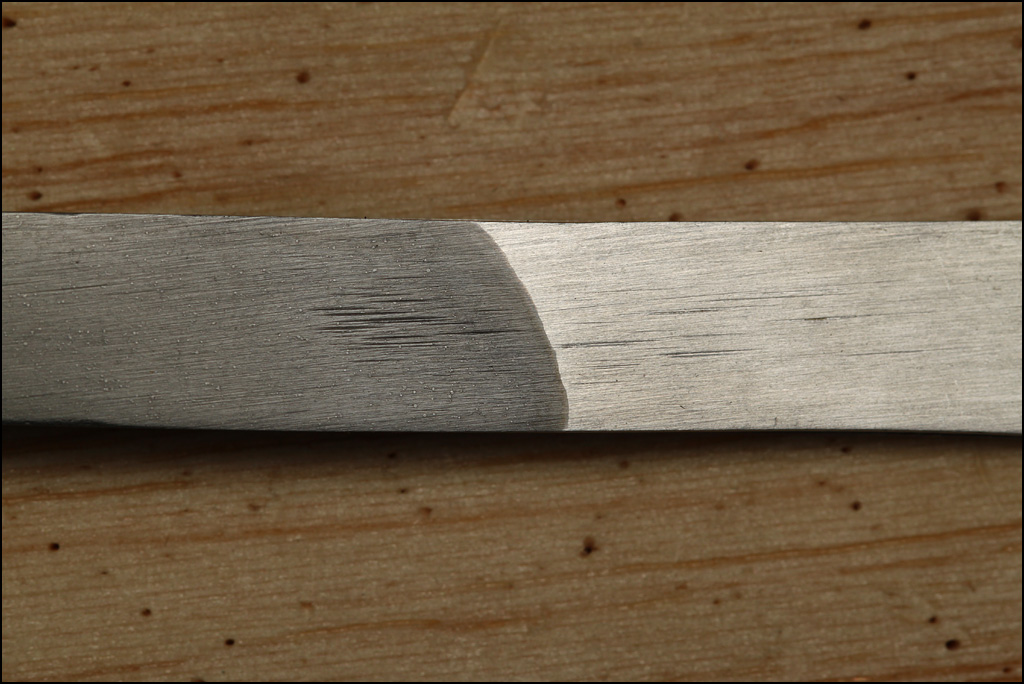 The story here is that I left some stainless steel forceps sitting in a bath of diluted Lime Away for a day or so. It was an accident to do that, but if I had thought about it, I probably would have said "No problem, those weak organic acids won't do anything to stainless steel anyway."

Hah, wrong on both counts!

When I noticed the forceps again, the portions under liquid looked almost black, obviously quite affected. I pulled them out, rinsed them off, and casually rubbed with steel wool, expecting the surface to come clean.

The surface did clean up quite a bit, but its finish was obviously very different on the soaked and unsoaked portions. Of course I couldn't resist looking under a microscope.

What you see above is roughly what I saw through the scope. The portions under the liquid were actually etched quite significantly. Aside from the change in general luster, there are now a lot of small circular "islands" of steel that rise above the general level. Such raised spots did not appear before, so I can only presume that they represent places where the steel did not get etched away. I'm thinking that perhaps those were places where a bubble formed on the metal and kept the acid solution from circulating.

The third picture shows what the forceps look like under room light. The etched portion, on the left, appears dark and matte, while the original surface is bright and mirrorlike. The second picture, on the other hand, show what the surface looks like when illuminated from the side. The mirror-like portions go dark because they don't reflect into the lens, leaving the matte portions to become relatively much lighter. The same lighting in the first picture just shows the raised dots more clearly.

Technical: Canon T1i camera and electronic flash. Image #1 is with a Nikon CFI BE 10X objective on Mitutoyo MT-1 tube lens, stacked at 10 microns; image #2 is with Nikon CFI BE 4X, also on the MT-1, stacked at 25 microns; image #3 is with Canon 100mm f/2.8 L USM macro lens, single frame at f/11. These are uncropped and with no CA correction, just the way they came out of the camera and stacking.
Top

Something which is initially surprising about stainless steel is that it's not stainless in the way that might be thought. It stains less! What you (normally) see on the surface is not plain metal but chromium oxide, which is only atoms thick but a lot harder than your iron wool.

Unlike iron oxides it's a protective oxide, so it just sits there, whereas iron oxides grow. Quite a lot of ions (famously chloride) find their way through. If there's insufficient oxygen, then the substrate gets attacked, which can be disastrous, eg in seawater.

No idea what's in Lime Away or what you might have forming there, or whether it's a chemical colour or an interference colour.
I can remember seeing phosphoric, acetic, malic and sulphamic acids used for descaling, apart from hydrochloric (not for bathroom fittings!!). But I've no idea what any but the last would do to forceps!
Top

Chris, thanks for refreshing my memory about how this stuff works. It has been several decades since I had anything to do with stainless steel corrosion.

The bottle says nothing, but the MSDS for Lime Away lists the active ingredient as sulfamic acid.

Wikipedia notes that "When compared to most of the common strong mineral acids, Sulfamic acid has desirable water descaling properties, low volatility, low toxicity and is a water soluble solid forming soluble calcium and iron-III salts."

It's a good question how much of the missing metal was reduced to friable corrosion that got scrubbed off by the steel wool, and how much went into solution in the dilute Lime Away. I still have the Lime Away, but no idea how to tell how much iron is dissolved in it.

I found eg here
http://www.swcc.gov.sa/files%5Cassets%5 ... DESALI.pdf
that sulphamic acid does attack stainless steel (316L - see if your forceps are magnetic).
I didn't think it would "touch" stainless steel, though the rates look low.

Units stated are MPY or mpy, which I had to look up , = milli inch per year (

Looking for iron in your Lime Away - memories of depositing onto platinum electrodes, dissolve the iron off, make Fe++ and titrate with permanganate. Eouw, easier to find a fellow in a white coat

ChrisR wrote:316L - see if your forceps are magnetic

Highly magnetic, will jump off the table when approached by a single 1/4" cube from one of those magnet toys.

After due consideration, I've realized that I don't know what the material is. I had presumed stainless steel, but that was only judging from the brushed appearance, the absence of corrosion after many years, and the frequent occurrence of "stainless steel" in advertisements for similar forceps. It could be something completely different.

Stainless Steel is still a very good bet, but a cheaper Ferritic ( just chromium, eg 18/0) rather than Austenitic (with nickel eg 18/10) type. That would make it less corrosion resistant.
Both are used for cutlery.
The heat-treatability of the two types is radically different, but they'll both work harden, so for light flatware that'll often be enough.
Top
Post Reply Previous topicNext topic
6 posts • Page 1 of 1