Reproductive end of a yucca moth

Reproductive end of a yucca moth

I expect this is a bit clinical for some folks' tastes, but I offer it up anyway.

As a high resolution stacked composite, here is the reproductive end of a yucca moth. 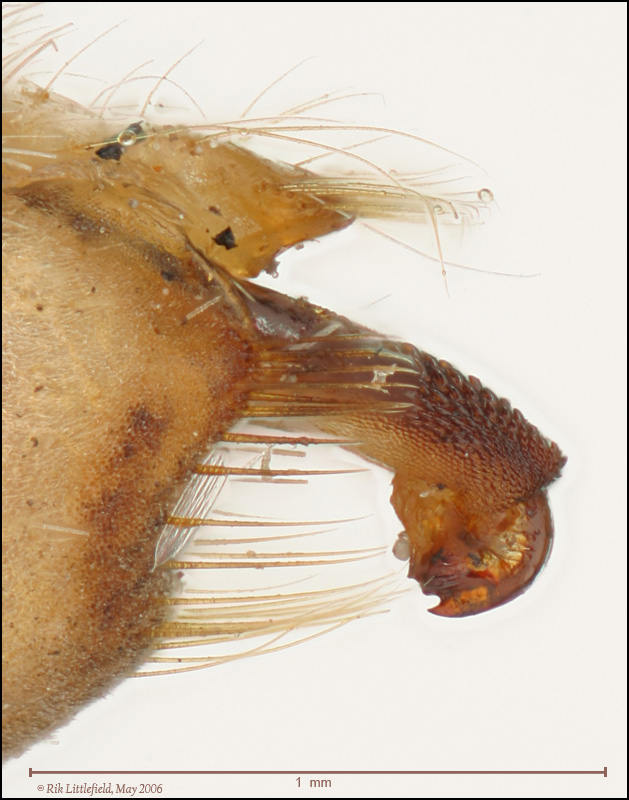 Despite what you might be thinking, this is actually a female yucca moth.

The long protruding structure is part of the egg-laying mechanism. It's very rigid, has a sharp hook on the end, and it's connected to some serious muscles inside the abdomen.

The guys who study these things think that this kind of moth uses the hook to scrape grooves in the tissue of a yucca flower, so the tiny larvae can more easily get to good food.

But they're not quite sure about that, because this particular moth presents a special difficulty.

What you probably don't know (I certainly didn't!) is that there are several different kinds of yucca plants and moths, all fairly neatly paired up -- each kind of plant with its own kind(s) of moths.

The species of yucca plant that is paired with this moth has a very small range. It's found only in the mountains of southern Baja California (Mexico), and the area where it grows is being rapidly reduced by human-caused encroachment (grazing), probably assisted a bit by climate change.

The moth, of course, has an equally small range. And a short emergence period. And the area is sort of hard to get to.

The upshot is that the adult of this species is known from exactly one specimen. This is it.

The specimen no longer even exists, in this form, because it had to be dissected to allow describing the internal anatomy. There may never be another one, because the chances are fair to middling that the species will go extinct before anybody gets back to sample the area again.

Extended-depth-of-field photography provides a quality of record that would have been impossible just a few years ago. Technology marches on.

Parategeticula ecdysiastica (Pellmyr & Balcázar-Lara) will be the name, after the upcoming publication in Zoological Journal of the Linnean Society. Says the paper, "Etymology: The species epithet is derived from Greek ecdysiast, one who sheds layers, referring to the nearly complete loss of all wing scales during adult emergence."

Many thanks to Dr. Olle Pellmyr, who gave me the opportunity to help document this beast.

The information and the photograph are very exciting and interesting Rik. It is sad that this might be the last chance to see this special relationship. You did a wonderful job on the photo IMO.
Take Nothing but Pictures--Leave Nothing but Footprints.
Doug Breda
Top

It is a shame that so many things are ending up endangered or just plain gone by encroachment or industrialization of certain areas. Whooping Cranes for example, not many left due to the fact that their habitats are being destroyed at an alarming rate and so it seems with this Yucca Moth. Great narrative Rik, many thanks and also thanks to the good doctor

Doug & Ken, thanks for the comments.

Here are another couple of pictures that you might find interesting.

I shot the beast in stereo (two stacks, separated by several degrees), from several different angles. The previous shot was straight from the side. What I'll show you now is an oblique view that may illustrate better how the various parts are positioned relative to one another.

First we'll do it as an animated gif, rocking between left and right eye views (each one stacked). Some people find this sort of animation more compelling than a static stereo view; other people prefer stereo.

Here's another high resolution composite, from the same viewpoint. 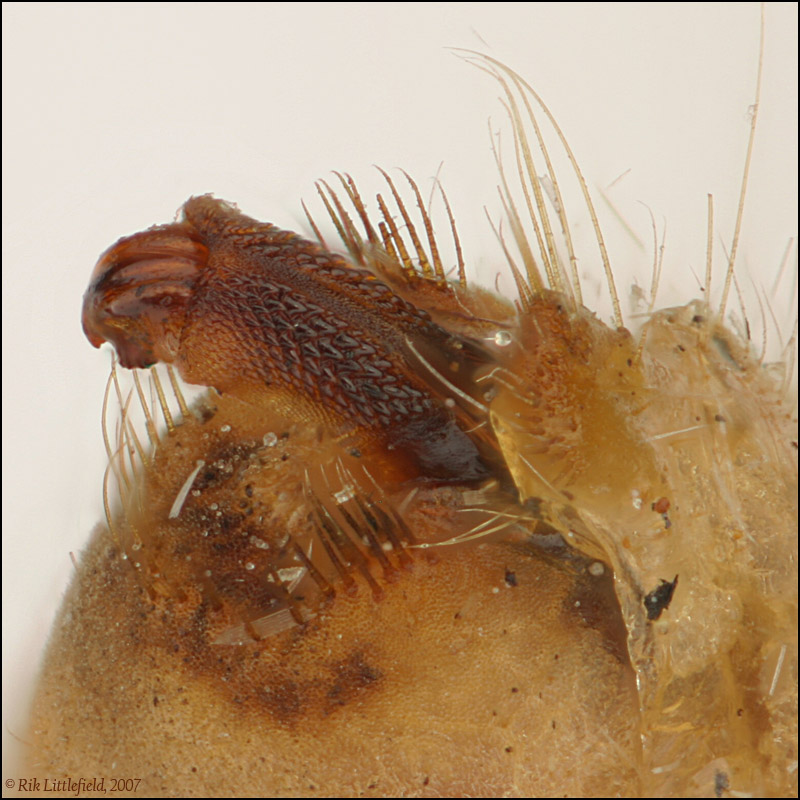 The bristles are thought to be touch-sensitive elements, by the way, used during the scraping process. The function of the spikes along the side of the scraper is anybody's guess.

PS. In case you happen to wonder about the position of the single isolated scale caught up in the bristles, you're right, it does look inconsistent. The answer is that the first pic in the topic was flipped for aesthetic reasons. Yeah, yeah, I know -- how aesthetic is this thing anyway? Cut me some slack, OK?

An amazing post Rik - great images and most informative and thought provoking. What a privilege to work on such a unique subject too.

Coincidentally, just 10 minutes ago I was watching a documentary from the TV series, "Life of Birds" with David Attenborough. The particular episode looked at how birds feed. One area it considered was the role of different shaped bills and the relationship between individual species of bird and plant. Specifically, by precisely matching bill size and shape with a corresponding flower size and shape, pollen transportation was constrained to flowers of the same species. A particularly extreme adaptation featured the Sword-billed Hummingbird.

Anyway, at first I thought that this was the same relationship as your yucca moth. But of course it's not quite the same. In the case of the hummingbird, the plant trades nectar for transportation of pollen whereas the yucca actually sacrifices some of its seed for the chance of pollenation.

Those spikes I find interesting too. As for anyones guess, like you said, they could be used for scraping also, seeing as though they are pointing back towards the moths abdomen. When the muscles contract maybe they too contract with it, performing part of the scraping procedure or it could be that they are an "anchor" of sorts, digging in and holding to a specific structure or tissue of the plant or maybe even the male during mating.

Only speculation on my part, seeing as how I know nothing about moths or insects in general for that matter. Ask me about myxomycetes

Thanks for all the comments, guys!

As followup, some SEM images and more macro shots appear in this later posting.