Here is the first decent output from a new toy. 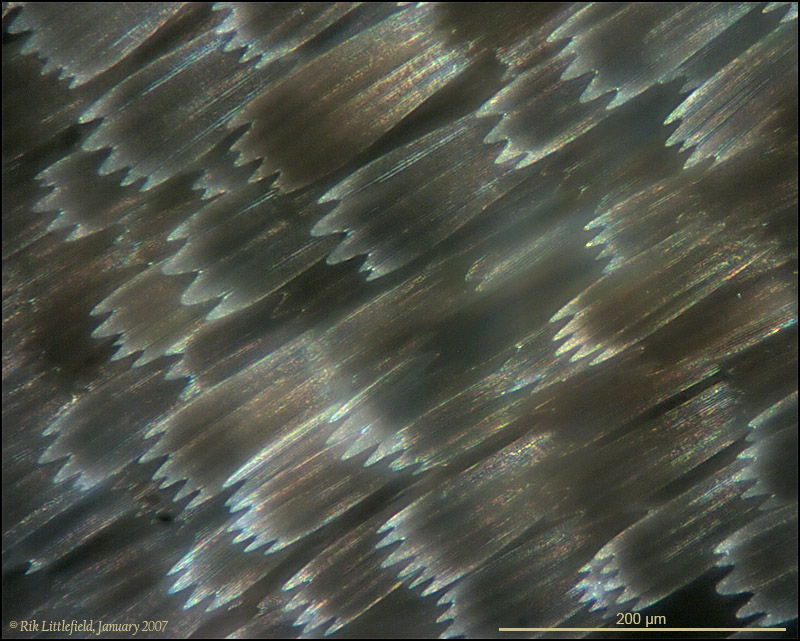 This camera is basically a bare sensor, 1280x1024 pixels, 6.4x5.1mm, with a USB-2 interface. It's not a particularly good camera (as one might expect for <$200 delivered), but maybe it's a useful surrogate for much better cameras that I expect to show up in the next few years. I'm hoping to use it to get a feel for what one can do shooting deep stacks fairly quickly.

Normally I'd shoot a stack like this using bellows and a milling table, and post the image over in the macro forum. But in this particular case, it was easier to get a quick look by leaving the objective mounted in a microscope and "stepping" focus with the microscope stage by continuously turning the fine focus knob while the camera & software collected an .avi file. The optics are the same, but the mechanics must make it a "micro" shot, right? Oh well, who cares -- it is what it is and here's where I'm putting it.

Hope you find this interesting,

What a neat way of focus stepping Rik and the result speaks for itself - it works very well.

I'm a bit puzzled why (what appears to be) a fairly 2D subject needed 51 stacked frames - was the wing at an angle to the sensor plane?

I was trying to imagine myself turning the focus knob as the video was recording - trying to maintain a slow and constant rate of turn and not jogging the microscope. I guess you start before focus and end beyond focus? Very interesting idea and (in my limited experience) thinking well outside the box.

Thanks for the feedback & questions.

You're right that the frame count is unnecessarily high for this subject. The wing is both wrinkled and slanted a little. (I just ripped it off a long-dead moth and dropped it on a slide.) The field you see here is about 120 microns deep, something like 15 DOF's according to MicroscopyU. Selecting every third frame in Helicon Focus (giving 17 frames) produces a result that's almost identical to what I've posted here. It doesn't degrade noticeably until every fifth frame (11 total).

The frame count is high for this first experiment mostly because I didn't make much effort to push it down. The camera only runs at 15 and 7.5 fps, the fine focus on the microscope only has 150 microns travel, and 7 seconds was a comfortable interval in which to push the buttons and turn the knob.

The picture is more interesting for technique than for result. My Digital Rebel would give a better picture, but only at several seconds per frame.

By the way, this isn't so far outside the box as you might imagine. There is (was?) at least one commercial company that combines a piezoelectric positioner to oscillate the objective up and down, a high speed video camera to sense the image, and some custom hardware to run the extended DOF algorithm. As I recall, they claim to provide something like 50 times deeper field, at realtime viewing rates!

Rik... I am seeing visions of stepper motors in your future...

Do you have an idea of the effective shutter speed for each frame? I was wondering how you can "continuously" focus without slightly blurring each frame (unless you have managed to get a pretty short exposure time).

Does the camera have an IR filter built in, or do you need to filter the light?

Thanks for the links. I think it was the Photron system that I remembered. The Keyence system is very impressive -- not just the technology but also the density of offices in the US, considering that this is a Japanese company. They seem to be doing very well from a business standpoint, with sales of $600,000 per employee and profits almost 1/3 of sales!


Charles Krebs wrote:Do you have an idea of the effective shutter speed for each frame? I was wondering how you can "continuously" focus without slightly blurring each frame (unless you have managed to get a pretty short exposure time).

I have not tested the effective shutter speed, but I'd expect it to be pretty close to the full frame time. As for slightly blurring each frame, I'm sure it does. However, in this setup the image does not shift or change scale significantly during an exposure, so all that's happening is that we're adding together some in-focus and some slightly-out-of-focus info. That amounts to a slight softening of the image, which can be almost fully reversed by sharpening, with very little actual loss of information. It's roughly akin to what you'd get if you registered and added every pair of frames in an ordinary stop-and-shoot stack, before doing the pixel selection trick. Taking as a reference what can be accomplished by applying CombineZ5's "Do Average And Filter" to a stack of 90 frames (that's all 90 added together before sharpening, with no pixel selection at all -- see here), I'm not very concerned about pairwise addition.


Does the camera have an IR filter built in, or do you need to filter the light?

The camera appears to have an IR filter built in. I didn't add any filters, just accepted the automatic color balance. There's certainly a thick layer of something in front of the sensor. When I said "bare sensor", I meant only no lens or shutter.

I should also add that this particular model of camera seems to be very sensitive to ray angle, and it has some image defects that are fairly troublesome for this sort of experiment. I tested another unit that's owned by a colleague. It turned out to be essentially identical. So there's no way that I can recommend this camera to anybody else, although I suspect I'm not going to send mine back either.