I'm looking for recommendations on small slave flashes for use in stacking.

Quick search found the Yongnuo YN460-II. It seems to provide lots of control over light level (1/7 stop increment from full power to 1/64), with built-in optical slave.

Any comments on downsides that I've overlooked, or alternates to consider?

Thank you Rik for such a pertinent question.I am presently pondering the same situation using your Zerene Stacker and a Stackshot I am also trying to evaluate the merits of flash versus continous lighting.This discussion is eagerly appreciated.
Quote:“Hot-Shoe Use with Canon and Nikon Camera Bodies
There is no dedicated Nikon or Canon version of the Yongnuo YN460 Mark II available, just one single version with standard ISO flash foot. The YN-460 mk2 has no form of TTL support built in – it is a fully-manual speedlight, not really designed as a hot shoe flash. If you want a Yongnuo with TTL, you should go for a YN465, the YN467 or a YN468. Or the upcoming YN-565.”
http://speedlights.net/2010/12/10/yongn ... Slave-Mode
Top

Last summer (fall?) I tested a variety of electronic flash units I have on hand. Canon EX-540, Nikon SB-800, Vivitar 283, YongNuo YN-460 II, and the YN-560. My primary interest was the consistency of flash output from shot to shot at different power levels. I used a Gossen flash meter, and was very patient about recycle times to avoid any error from incomplete recycling.

They were all pretty comparable in that regard, with the exception of the YN-560 which would occasionally give a greater variation than the others. It's too bad because otherwise it would be my first choice.

The YN-560 generally had about the same +/- 0.1 stop variation, but on occasion I would get a shot with a 0.2 stop variation. Rarely.... but it did occur.... I would get a shot varying 0.3 stops ("darker" in this case). This was manifested at very low power settings (lower than 1/8 ). At settings of about 1/8 power and greater (more power), it fared about the same as the others. It's built in slave is far more sensitive than the YN-460II. It recycles incredibly fast with just 4AA batteries. It works (as can the Canon and Nikon) with a YongNuo SF-18 battery pack. "High voltage" and inexpensive, this provides a very large number of shots at very fast recycle. (With the normal caveats about over-heating your flash if you fire too many high power flashes in quick succession. But at the lower powers typically used it'll go for an incredible number of flashes at essentially instantaneous recycle).

As mentioned the slave on the YN-460II is not all that sensitive, but probably adequate for tabletop setups. You also need to pay attention to the "auto-shutoff" time. I would need to double check what is is, but if you've been sitting idle for a while you better be sure they are up and running when you start a stack. The construction quality of the YN-460II seems to be a notch below the others. But between my son and myself we've been using 3 460s and 2 560s and they have, for us at least, been perfectly reliable. (I am aware that there are many accounts on the web by folks who have apparently not been that fortunate with the YNs). I've been tempted to try a YN565 (New E-TTL version of the 560) just to see how it fares in the consistency test.

The Nikon and Canon flashes are very nice, but for a tabletop stacking set-up where you use only manual mode at reduced power output they seem like an awful lot of money for features you will never use.

I often use YongNuo RF-602 radio slaves as well. They have been very reliable and I really like the very small hot-shoe mounted transmitter. I'll use them to fire the first flash, and any other flash units can be either optically slaved or also have an RF-602 receiver.
http://www.krebsmicro.com
Top

I have a sigma 610 super which has worked out well for me. If its use is exclusive for table top then maybe Charles is right about it being over kill. If you are using multiple flashes, having the option of 1/128 maybe useful, depending on the units guide number.

I have experienced a couple times where the flash's power has been a little variable. Maybe about 1/3 of a stop. With the units you tested Charles, did you find this to happen on a sporadic basis at all?

My "testing" involved about 8 different units, with probably about 100 "flashes" for each... 35 or so at few different power levels. (It was not intended to be an ultimate intensive procedure. Unfortunately I did not retain any data since all I was concerned about was sorting through those specific units for my own use). But the only units that deviated 1/3 stop (0.3 on the meter), and only on occasion, were the YN-560s at power levels less than about 1/8. Based on the better consistency other units provided, I prefer not to use the YN-560s I have for stacking. While the stacking software has provisions for adjusting exposures, I prefer to keep the exposures in a stack series tighter than that.
http://www.krebsmicro.com
Top

Thanks to all for the info. This is very helpful.

Regarding flash variation, another issue that bugs me is slight change in color balance from one flash to another. I don't know what causes it, or even what settings makes it worse, but I do know that from time to time I'll be shooting a neutral subject and run into easily visible variation from one frame to another.

I just now ran a series to explicitly test for it and got only changes that were pretty small but still mysterious. This was using a Canon 580 EX II on manual 1/32 power in a dark room, with a Canon T1i set on Flash color balance, recording Raw+JPEG. Here are two sample frames. The Info panel is reporting a 51x51 average. I get the same results from the in-camera JPEG and converting the Raw using Photoshop. Flash recycle time is under 3 seconds to "Ready" at full power, and these frames were selected from the middle of a 150-frame sequence controlled by a StackShot with constant 10 seconds per frame (at 1/32 power). 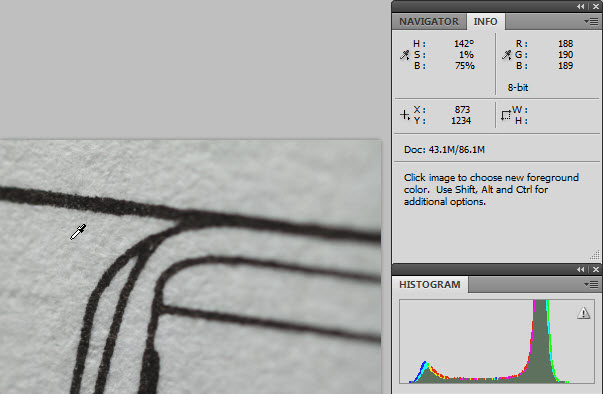 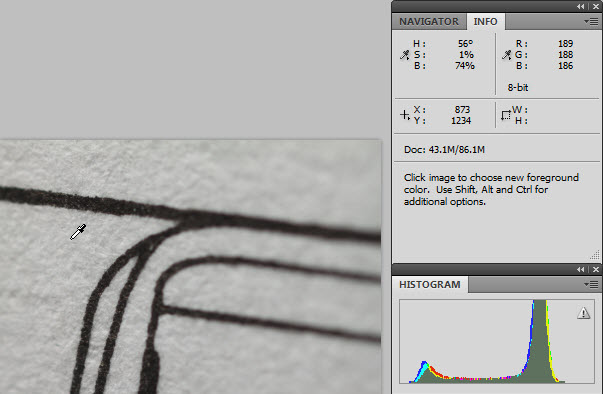 You can see from both the numbers and the histograms that there's been a definite shift in the balance. What's shown here is a lot less than I have seen in other stacks where I haven't been specifically monitoring and trying to control for it. I don't know how common this is, but I did used to get similar effects with a different camera and a different flash so at least it's not a completely unique problem.

It might be a silly question ... mine often are

But could it be due to slight changes in position of objects (you?) bouncing/reflecting light back in on the subject? Or is the subject shielded from all other light sources than the flash?
Top

Forgot to mention, the room was not only dark but the equipment was clicking away in isolation -- no people or pets around.

The reason for the darkened room is that I didn't want to risk picking up any contribution from overhead fluorescents that might not be completely overwhelmed by the flash. I've seen before that fluorescents not only flicker in brightness but also change their color balance through the AC power cycle, so there's two ways they could mess things up if the illumination were mixed.

I wonder how that would translate to a colour temperature shift.
Somewhere I have a set of Gossen meters for colour temp, flash intensity and flash colour temp. Some film was peculiarly fussy.
I remember the flash colour temperature was a problem only resolved by replacing Bowens with Elinchrom - but this was 20 years ago.
Flash temperature also varied with flash intensity, and with the age of the tube. Elinchrom had much shorter flash durations, which may have been significant. Higher voltage less current??
Not much chance of finding the meters now - I don't even know where the heads are.
You might be able to borrow one from a geezer who's more organised though?

A quick web search came up with a couple of studio flash users dissatisfied with colour stability. I can imagine some users wouldn't be very fussy at all for normal applications.
Top

Does the color temp (and output) vary with temperature? If so, the end of the sequence could be quite different than the start.
www.peterdesmidt.com/blog
Top

Interesting Rik, I've had this mystery as well. But, I put it down to the cam, not the flash, I've seen it on outside non flash too.
My extreme-macro.co.uk site, a learning site. Your comments and input there would be gratefully appreciated.
Top

Studio flashes are well known to change color with power. For example one flash reviewed in the February 2012 Advanced Photographer is described as "Colour is good, and measured 5300K at full power, reducing by 400K at minimum." Another was "Colour temperature was 5900K at full power, warming by 650K at lowest output, which is a noticeable shift."

I expect that consumer flashes would vary also with power, though probably not as much because the studio flashes control power by reducing the voltage, where consumer flashes do it by shortening the time.

In any case, my flash is running at fixed power.


Does the color temp (and output) vary with temperature? If so, the end of the sequence could be quite different than the start.

The variations I'm concerned with seem to be completely random. Here is an array of consecutive thumbnails, with saturation cranked way up by adding a +97 Saturation adjustment layer in Photoshop. 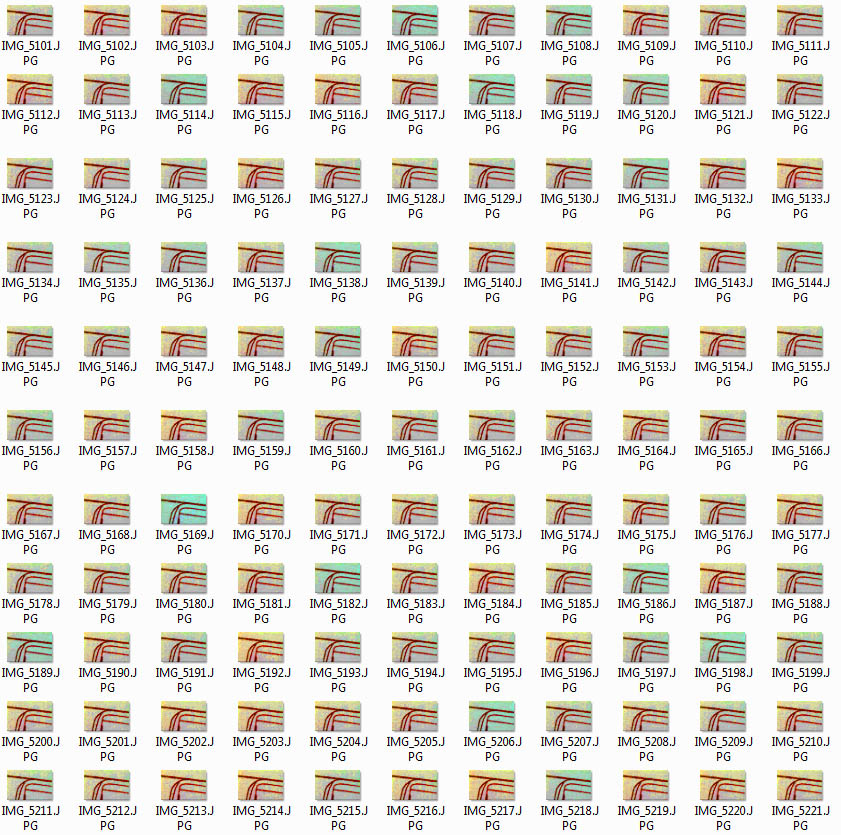 The two frames I showed earlier were 5198 and 5214, chosen because in a different array of thumbnails they were spatially close enough to stick out as having obviously different color.

Ok, so it's not temp. How precisely does a capacitor recharge after it is discharged?
www.peterdesmidt.com/blog
Top

Peter De Smidt wrote:How precisely does a capacitor recharge after it is discharged?

I don't know the details of either mechanism or accuracy for this flash. I gather the power control circuits can be quite sophisticated. I recall reading one report in which the investigator fired his flash at partial power several times in rapid succession, too fast for the capacitor to recharge between. What he found was that the flash output was very consistent despite the change in voltage, because later flashes were lengthened just enough to compensate for the slower rise caused by lower voltage.

What's interesting in the data I'm showing here is that the overall exposure is consistent even though the color balance shifts. In one frame the RGB values are [189,188,186] while in another frame they are [188,190,189]. This is averaged over the same 51x51 area in both images. It's the change in RGB ratios that is surprising.