What does StackShot "High Precision" mean?

What does StackShot "High Precision" mean?

I think by this point it's common knowledge that recent versions of the StackShot firmware have a High Precision mode that you're supposed to set ON when you're using small step sizes. But I don't think we've ever discussed quantitatively what High Precision means. This post is to fill that gap.

First, here's the experimental setup that gave the measurements I'm about to show. The StackShot is horizontal, with a heavy lens hung off the front of the camera so as to put a lot of torque on the carriage rails -- not recommended practice but good for stressing the system a bit. Taped to the lens is a chunk of paper laser-printed with small dots that get used for position tracking. Watching the paper is another camera, set up with a 50X objective to make the paper movements easy to track. 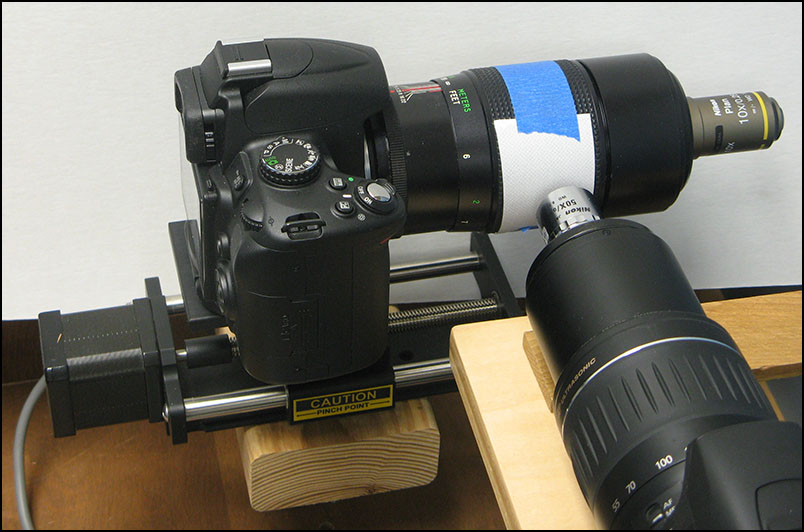 To make the measurement, I set up the StackShot controller in Dist/Step mode with an increment of 1 "step" (actually 1 microstep) and 4 seconds settling time, then shot a sequence of 195 frames. I did this twice, once with High Precision turned OFF, and again with it ON. No other differences. Then I pulled the images into Zerene Stacker and used the Align All function as described HERE to extract positioning numbers. 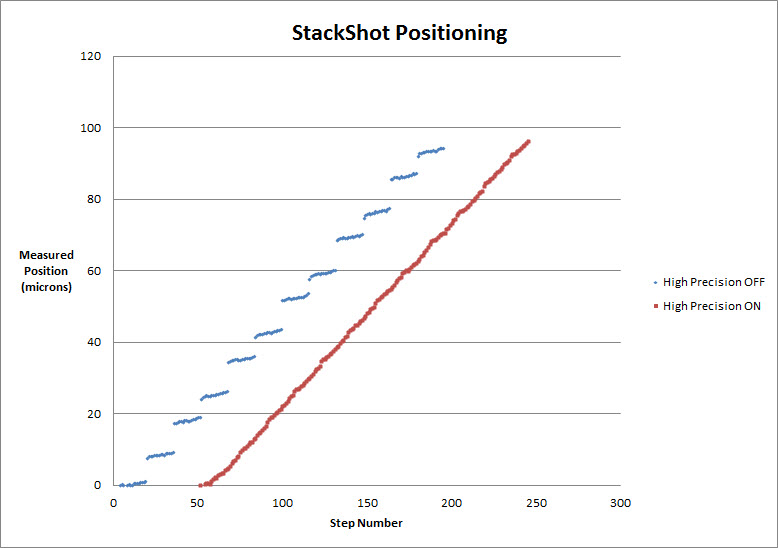 As you can see, the StackShot with High Precision OFF is prone to periodic big jumps every 16 microsteps (7.936 microns), with an especially large one every 32 microsteps (15.872 microns).

So, for high magnification work such as 40X or 50X, what I do is to set a nominal step size of 1 micron (2 microsteps), knowing this means that most of the time I'll get a little less than 1 micron and once in a while I'll get a hair over 2 microns. This is sufficient to avoid focus banding while still getting good rendition as illustrated at http://www.photomacrography.net/forum/v ... 997#103997.

I hope this bit of arcania is helpful to somebody else besides me.

Thank you, very useful
My extreme-macro.co.uk site, a learning site. Your comments and input there would be gratefully appreciated.
Top

But this does pose another question, atleast in my mind. What is changing on the rail when high precision is turned on, and why is that not the default behavior?

When the rail is in High Precision mode, the motor emits an annoying whine and gets mildly warm from increased power consumption due to more holding torque. The whine is especially bad when the rail is fastened down to something that can serve as a sounding board.

When I initially did the controller in Zerene Stacker, High Precision was turned on all the time. That prompted an emphatic question from multiple users: "How do I turn off the noise?!"

In ZS, I added a user-specifiable threshold so that High Precision gets used automatically for fine steps but not for large. In the StackShot's own controller, there's a simple Config option to turn it ON or OFF.

Many thanks for your hard work.


In ZS, I added a user-specifiable threshold so that High Precision gets used automatically for fine steps but not for large. In the StackShot's own controller, there's a simple Config option to turn it ON or OFF.

I don't really mind the whine, I just consider it the price for excellence, such is life.

But, what I think is really revealing here, is that the default precision is so poor for such an expensive dedicated piece of angineering.
My extreme-macro.co.uk site, a learning site. Your comments and input there would be gratefully appreciated.
Top

In the StackShot's own controller, there's a simple Config option to turn it ON or OFF.

For USB enabled controllers:
Press the 'Config' button.
When the Config screen appears on the controller's LCD, press the Select button to step through the adjustable parameters.
The High Precision Mode ON/OFF option is on the second page/screen of the Config menu. Once selected, press the Up or Down buttons to 'toggle' the mode on or off.
Press the Config button to return to the Main Menu.

The StackShot was not originally designed to work at magnifications higher than 5X. The option to now use the unit for magnifications up to 50X could be considered a bonus rather than a shortcoming.

Craig Gerard wrote:The option to now use the unit for magnifications up to 50X could be considered a bonus rather than a shortcoming.

Exactly. As I understand it, the rail was originally designed to work mostly in full steps, with microstepping being used for smoother acceleration. But I wanted to push the device to its limits, and when I did that, I tripped over the problem with big microsteps. The problem now seems obvious, but I assure you that was not the case in the beginning. In fact early versions of the rail were represented as having a 10 micron minimum step size, and it took some "creative misrepresentation" just to set a step size that would be some arbitrary number of microsteps. (See HERE and the surrounding thread for some more explanation of that.) It was then that I tripped over the problem and collected some good data that showed the pattern. When I shared that with Cognisys, they figured out the underlying cause: a hardware limitation in the motor control and driver chips they were using that introduces gross nonlinearity in the microstep drive when used at low torque and low speeds, like when sitting still. After some R&D, they figured out how to work around the problem in the firmware, no hardware mods required. Initially high precision was available to users only through Zerene Stacker's interface, which I guess was cool for ZS from a marketing standpoint, but really I'm much happier to have it available in the basic controller too since it means I can use it even when I don't want to cart around a laptop.

As for what's "default", well, something has to be. The alternatives are to default High Precision ON, which would annoy most users for no benefit, or to default it OFF and let high mag users turn it ON.

Personally I'm both impressed and delighted by the performance of the rail. I mean, we're talking about a device that can move 15 pounds vertically, has a maximum speed of almost 5 mm per second, can step fine enough for use with a 50X NA 0.55 microscope objective, and is available off the shelf for less than the price of a good macro lens. If you can find a better deal, take it!

rjlittlefield wrote:...
In ZS, I added a user-specifiable threshold so that High Precision gets used automatically for fine steps but not for large. ...

Pretty much how the stepper controllers I use work - they automatically go from full step to smaller and smaller microsteps as they get closer to target and have less to move.

I'm somewhat intrigued by the staircase you report. It is a recognised issue when microstepping that there is a "magnetic stiction" as you pull away from one node and then have to fight getting pulled onto the next. Makes me wonder if perhaps the cognisys controller is just not putting in enough power and/or hasn't implemented the best possible microstepping waveform.

In industrial app's you typically get around this by:

- using a gear box and whole stepping with phenomenal holding and lifting power
- using multiphase motors or higher resolution poles. Multiphase drivers are a PIA but it is now much easier to make 0.9deg bipolar motors with the simple drivers they need.
- or tuning the microstepping current waveform so it isn't a simple sine-cosine waveform as you move from one node to another
rgds, Andrew

The black-box measurements I took earlier indicated that the physical position and driving waveforms are closely correlated. The electrical drive has that big step too, when run at low holding torque. Magnetic stiction is way down in the noise, judging from the difference between torques with power on and power off. You'll have to ask Cognisys exactly how the waveform is generated. I can't even see what chip types are involved, short of taking my controller apart with a soldering iron which I'm loathe to do.

I spent half an hour today trying to persuade a guy from another company to lend me a laser interferometer with nm precision to check my stage movements but he was curiously reluctant. Perhaps I'll try something more diy - bouncing a laser of a mirror attached to the stage and seeing how far it moves across the wall ?
rgds, Andrew

laser interferometer with nm precision to check my stage movements

I can understand his reluctance, but I suspect you really don't need nm precision. There's no point for optical focus stacking.

Why not just measure the way I did? There's no trouble measuring to small fractions of a micron when you get to average the image correlation over the whole frame.