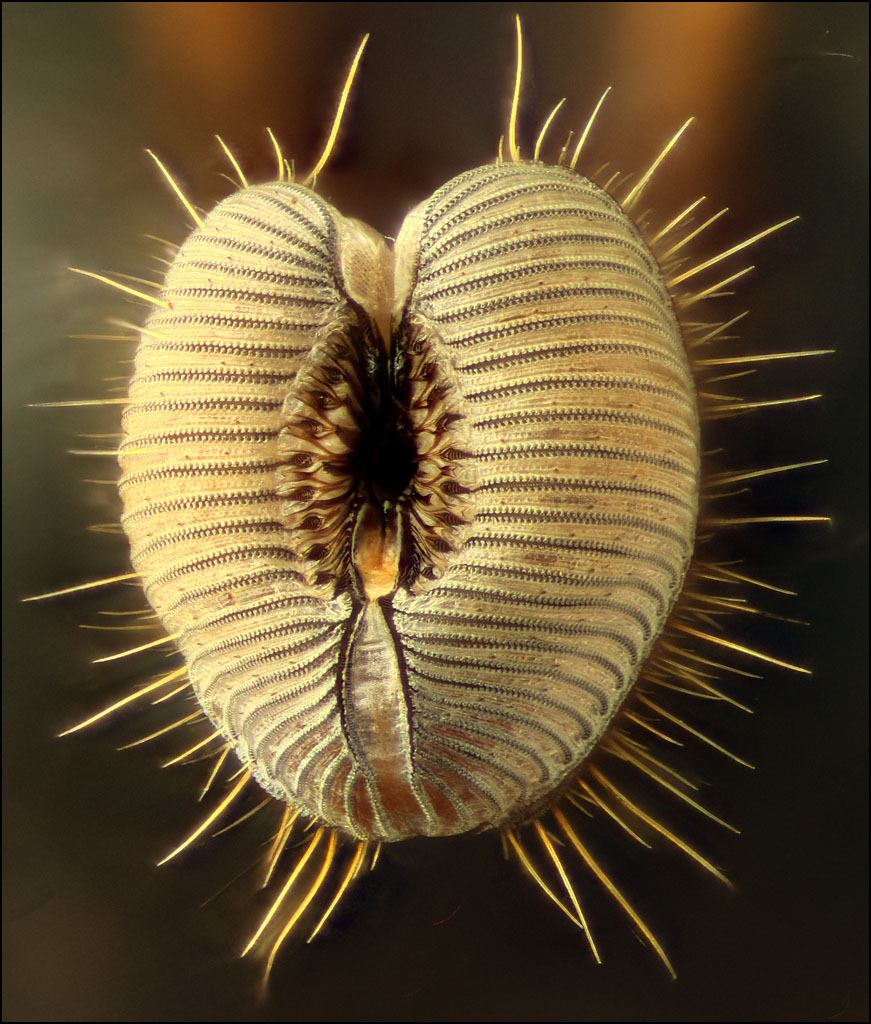 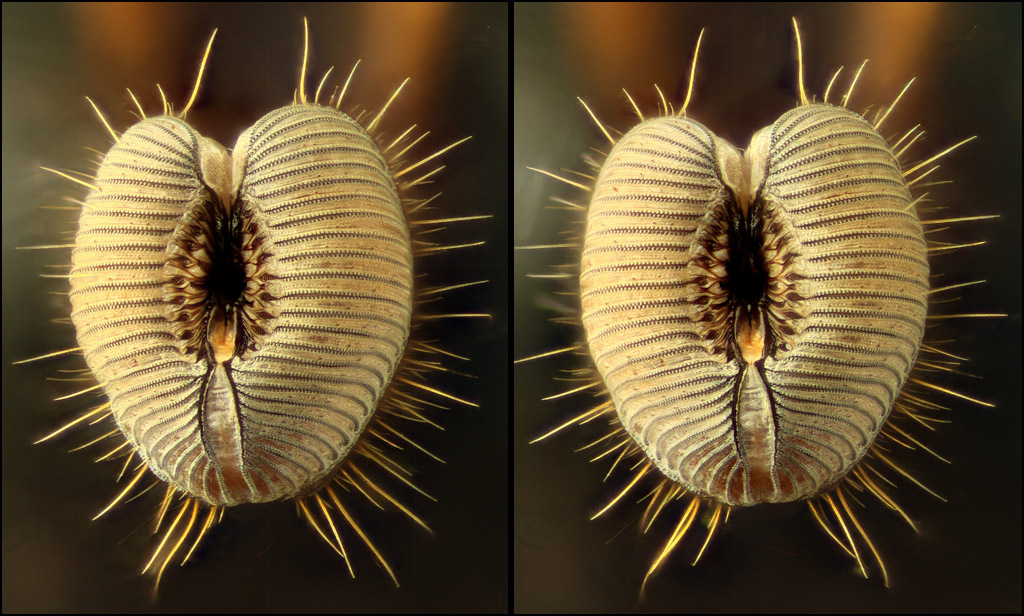 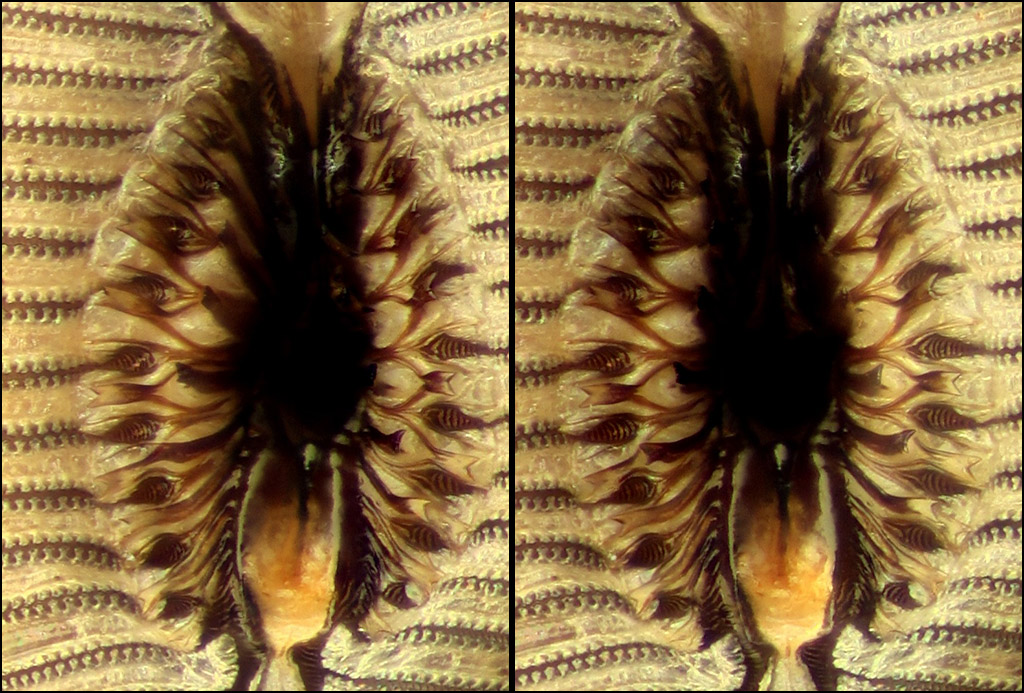 Of course this is a followup to my first attempt, HERE. I'll mostly be tied up on other things for the next couple of days, but I wanted to get this posted out for feedback.

I decided I didn't have enough skill or patience at this time to pull off the syringe-inflation technique described by NikonUser (HERE). So for this photo, I tried a much simpler approach to see if it would do something useful.

NU had originally suggested to me offline that I soak the specimen in water to see if it would assume a more lifelike position. That seemed like a good idea, but I really wanted a specimen that would be stable when dry so that I could shoot at high magnification. So I pulled a new specimen out of the freezer and treated it by thawing in water followed by a long bath in an ultrasonic tank with just a bit of cleaning solution added. After the critter was thoroughly soaked, I checked it under a microscope and observed that it had softened enough to naturally assume the shape you see here. Then the challenge was how to retain that shape when dry. The solution was to keep the beast suspended in liquid while I gradually swapped out the water for acetone. After the bath got to 100% acetone, I let the critter sit for another half hour or so to leach out as much water as I was willing to wait for. When I pulled it out, the whole critter seemed to be rock hard, and it dried cleanly into the form you see here. It's almost opaque of course, but that's not necessarily a bad thing since it clarifies where the membranes are.

I'll be interested in other people's take on the stereo versions. As hard as I try, I cannot get my eyes on any of those short conical teeth that show up in NU's specimens.

Rik, very nice work again! We have to bear in mind that Lowne's, Tony's, David's and yours are probably different species of "blow flies" with, to some extent, different morphology.

Particularly in that new photo, I find these larger structures interesting (my green arrows): To me they appear also bifurcated, and their two tips are darkened which is usually a sign of sclerotization, as often seen in structures with some sort of tooth function. 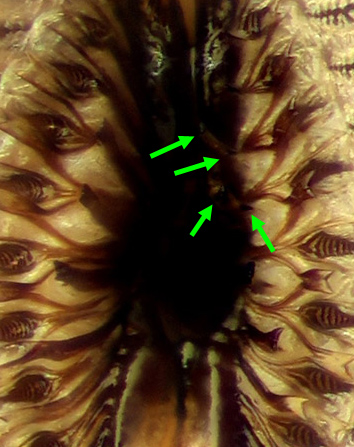 Very nice image and very clear. There seem to be two sets of 'teeth' one which bifurcates to pass on either side of a psedotracheal opening, and a shorter set which are possibly more heavily sclerotized which project into the space between adjacent pseudotracheae. I can also see this on my flattened preparation though of course it is less beautifully clear than on this version of Rik's.

As far as different fly species are concerned

Looking at the slide I used, Topping, an English mounter would certainly have mounted a Calliphora, probably either Calliphora vomitoria or Calliphora erythrocephala (now called Calliphora vicina I believe). Lownes' monograph on the blowfly refers specifically to Calliphora erythrocephala and for mounted material he is likely to have been working with slides like the one I used, as his monograph is contemporary with the period at which the Toppings, father and son were preparing their mounts for sale. My images with the X25 objective closely resemble Lowne's illustration Fig. 31 on page 145 of his monograph which shows 'prestomal teeth' lying in the same relation to what he calls a 'pseudotracheal vessel' in a diagram that is obviously drawn from a flattened mount.

A possible refinement would be to immerse the fully-dried labella into one of the histological clearing agents (xylene, toluene, cedarwood oil, clove oil).
This should make the labella more translucent, the clearing agent could be left to evaporate (xylene, toluene) or washed off with isopropyl alcohol for the oils. The dried labella hopefully would be more 'glass-like' and show the features more clearly.

I could perhaps even try it with my beast.
NU.
student of entomology
Quote – Holmes on ‘Entomology’
” I suppose you are an entomologist ? “
” Not quite so ambitious as that, sir. I should like to put my eyes on the individual entitled to that name.
No man can be truly called an entomologist,
sir; the subject is too vast for any single human intelligence to grasp.”
Oliver Wendell Holmes, Sr
The Poet at the Breakfast Table.

Fascinating photos, especially for myself as a non-biologist/entomologist.

I've been in awe of the complex and sensitive preparation techniques required for such photography from my earliest visits to this forum, and this aspect of acquiring such photos is most remarkable to me.

Although I'm not even slightly experienced with specimen prep but it is now obvious to me that it is critical aspect of this type of work. I would like to at least audit a college-level course in this subject, assuming such courses are available. I fear that they might only be available as part of a graduate research program, though. In any event, I need to save such ambitions for my next life - this life as a (retired) physical scientist is running a little short of time and energy, I fear!

Finally, I suspect that sample prep is as much an art as a science, something like painting or sculpture...please comment if my impressions are too far off the mark.
-Phil

A couple of new images, from a different viewpoint. Shot at 10X on sensor. 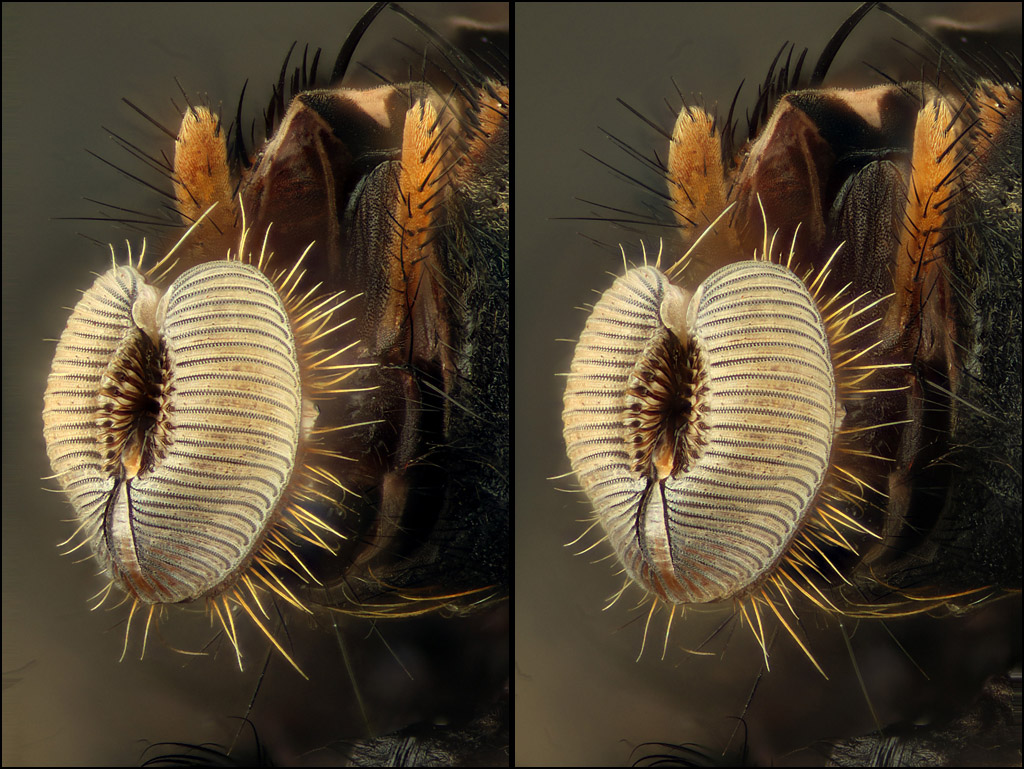 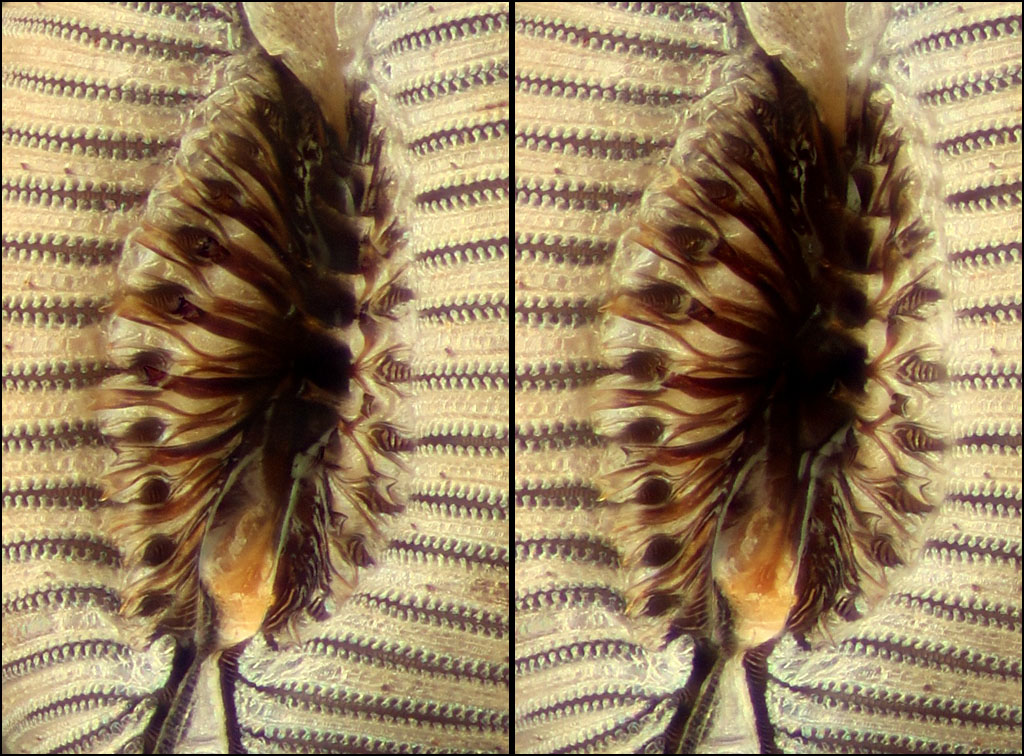 ZS PMax, no post-processing except for sharpening.

It is series like these which support my opnion that stereo is the way to go with such subjects. It is a major part of the experience of structures beyond unaided vision.

Were these shot as stereos or are they from Zerene trickery?

These are Zerene synthetic stereo, generated from a single stack. It's trickery only in the sense that the left/right viewpoints are generated computationally. The software makes no attempt to "understand" the images, "fit a surface" to the observed data, or do any other intelligent operation. All it does is to reformat the images in a way that lets the stereo-matching part of your brain do its quite remarkable trick of matching details and offsets and turning those into an immediate perception of depth.

rjlittlefield wrote:These are Zerene synthetic stereo, generated from a single stack. It's trickery only in the sense that the left/right viewpoints are generated computationally. The software makes no attempt to "understand" the images, "fit a surface" to the observed data, or do any other intelligent operation. All it does is to reformat the images in a way that lets the stereo-matching part of your brain do its quite remarkable trick of matching details and offsets and turning those into an immediate perception of depth.

Extemely impressive! I am currently reading up on how the brain can be deceived: magicians' (and other) misdirection, change blindness, the myth of multitasking, etc. This is clearly in the same area of mind science.

I think this is the most convincing example of stereo I've seen in the macro/micro photography domain. I'm sure there must be many others, but this example is striking in that even in retrospect I cannot visualize the actual shapes of local substructures with a single image. With stereo, it's automatic and effortless (I happen to be able to quickly and easily fuse stereo images).

These images are excellent! The discussion of the fly mouth parts by Dave, Rik and NU has been very illuminating. I especially appreciate the link to Lowne's text.

I think a few photos of the mouth in use by a living fly would help me understand the bigger picture. I wonder how conformal the suction cup end of the mouth is the surface being slurped up. In my profession I design oil scavenge systems and the branched network of suction tubes is fascinating. Branched suction tubes would violate our normal design practice. My own experiences of going after the last bit of milkshake in the bottom of a cup with a straw suggest that the fly maintains a good seal around the edge of the mouth, though at this smaller scale, the surface tension/capillary action aspects of the fluid may alter the fluid's character and make a tight seal unnecessary. Or, perhaps it reciprocates and pumps the fluid toward the center.

Thanks again for these great images!

From what I recall seeing blow flies feed is that the ventral surface is flat and not convex as in Rik's image (not a criticism Rik).
Even in my lateral view image

the labella are far too convex. The actual edge of the labella that 'fits' the food surface is that fine wavy line shown just above the oute tips of the pseudotracheae in my lateral view image.
NU.
student of entomology
Quote – Holmes on ‘Entomology’
” I suppose you are an entomologist ? “
” Not quite so ambitious as that, sir. I should like to put my eyes on the individual entitled to that name.
No man can be truly called an entomologist,
sir; the subject is too vast for any single human intelligence to grasp.”
Oliver Wendell Holmes, Sr
The Poet at the Breakfast Table.

Thanks for the feedback, folks.

Harold, I would be delighted if stereo treatment of subjects like this were to become common practice. In part that's because as far as I know Zerene Stacker is the first tool to make it easy to get good stereo at this magnification. The sharpness you see above comes from using an NA 0.25 objective, and the resulting DOF from a single frame is, well... 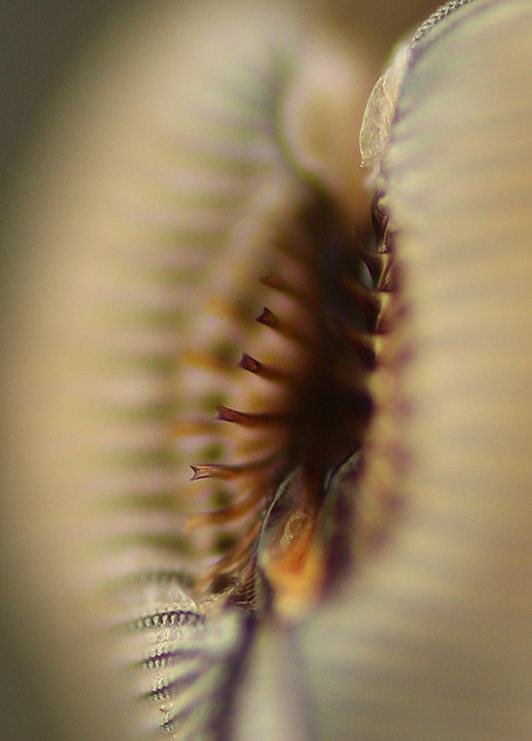 Regarding subject prep and the shape of this specimen, I think it would be very cool (pardon the pun) to freeze a blowfly in the act of feeding with a splash of liquid nitrogen, then freeze-dry the critter. I've heard of this being done for example with mating spiders, to explore by sectioning how the pedipalps fit with the epigyne. Surely somebody must have done it with flies, but I have no idea where to find the work.

Another perhaps even more helpful study would be to shoot video through a coverslip while the blowfly was imbibing on the other side. With luck, maybe the fly does a pretty good job of keeping its proboscis jammed flat against the glass so lots of data with no stacking needed?