I have been looking at z-axis stages on a proxxon table but I need some kind of goniometer or similar to tilt subjects.

Does anyone have experience with an affordable solution for something like this?

For that kind of magnification a small and cheap ballhead will give you til and 360º capabilities. I only really use my goriometeres at 40X +

I use a small ballhead as Javier suggests, with a sheet of balsa mounted on the ballhead to hold pins.

Other solutions are offered by BioQuip as small rotating "microscope stage" such as HERE and HERE, or the equivalent DIY versions.

While they aren't a goniometer, wiffle balls or Nässjös work realy well for subject positioning. See this thread: http://www.photomacrography.net/forum/v ... hp?t=10430

search the forums for wiffle and Nässjö
Top

Morten, welcome to the forum!

You may have seen my own implementation of a goniometric stage here. Last time I checked, the Thorlabs GNL goniometer that I use still appeared to be the best combination of utility and affordability available in a goniometric stage for photomacrography. That said, I purchased mine on eBay for less than retail price, and such deals seem to be scarce these days.

In my experience, a goniometric stage is hugely helpful and well worth the cost. I use mine from 2x-100x, and would find photomacrography very frustrating without it. So if I had to start over from scratch and couldn't find an inexpensive goniometric stage on eBay, I think I'd just accept the pain and purchase a new GNL goniometer from Thorlabs. My goniometric stage is very important to my workflow.

As you probably know, ballheads and the like are somewhat opposite in function to a goniometric stage. On a goniometric stage, your subject is at the axis of rotation, and the stage orbits around it as it turns; with a ballhead, the center of the ballhead is at the axis of motion, and your subject orbits around it. This difference in subject motion is not a small thing. You probably apprehend this already, since you're looking for a goniometer.

That said, I keep thinking that a decent-quality DIY goniometric stage should be within the realm of possibility.

Thank you all of you, I have never seen a photography forum that takes in new members so readily 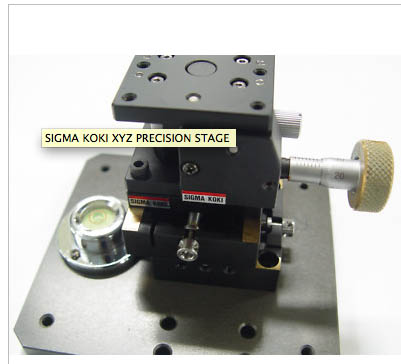 what do you think?

I will probably start of by mounting a small ballhead on it. I have an old Manfrotto 482 I want to try using.

Thank you again all of you. I hope to someday reach your level of stacking.

The wonderful ebay seller eapoe had a similar unit up for auction now.

This item reminds me somewhat of the Arca-Swiss Cube. I think the price is about $2000 US dollars, with aleather case!

My understanding is that they are erratically produced, so if you want the Cube, buy now!!
-Phil