Today we had our first notable snowstorm of the winter. Yeah, I know -- on January 18?! Odd winter.

Anyway, when I got up and saw several inches of fresh snow with more still falling, I thought it would be a good opportunity to photograph some lovely hexagons.

But that's not quite the way it worked out. What had actually been falling was a mass of tiny linear crystals.

Here's what they looked like in aggregate, as a thin windblown layer on my porch: 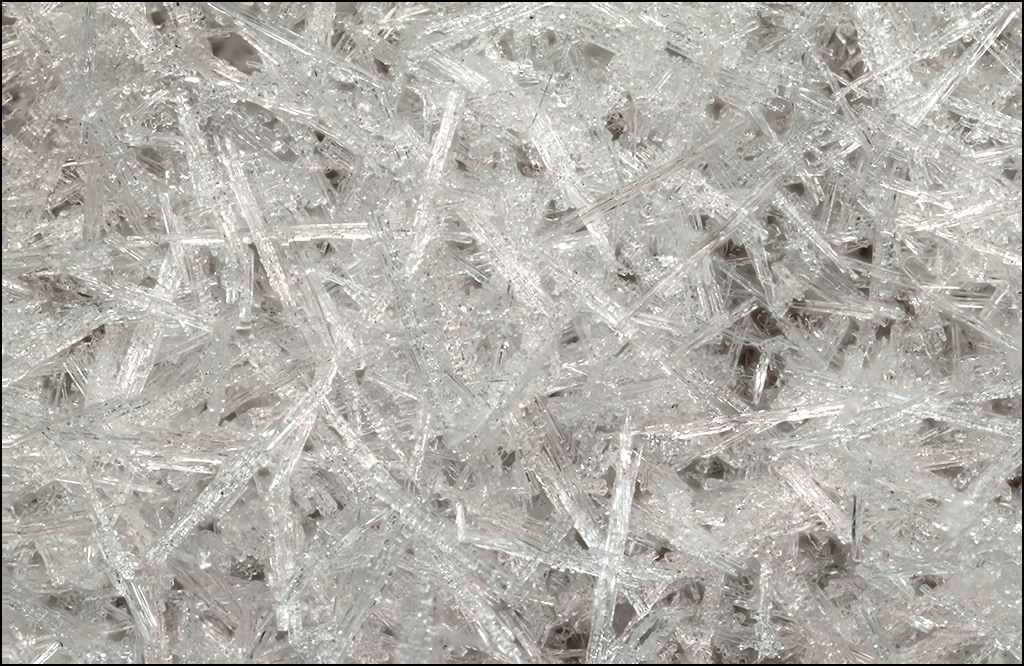 The better to see what was going on, I set out a piece of chilled Protostar and shot it quick before much more had fallen. 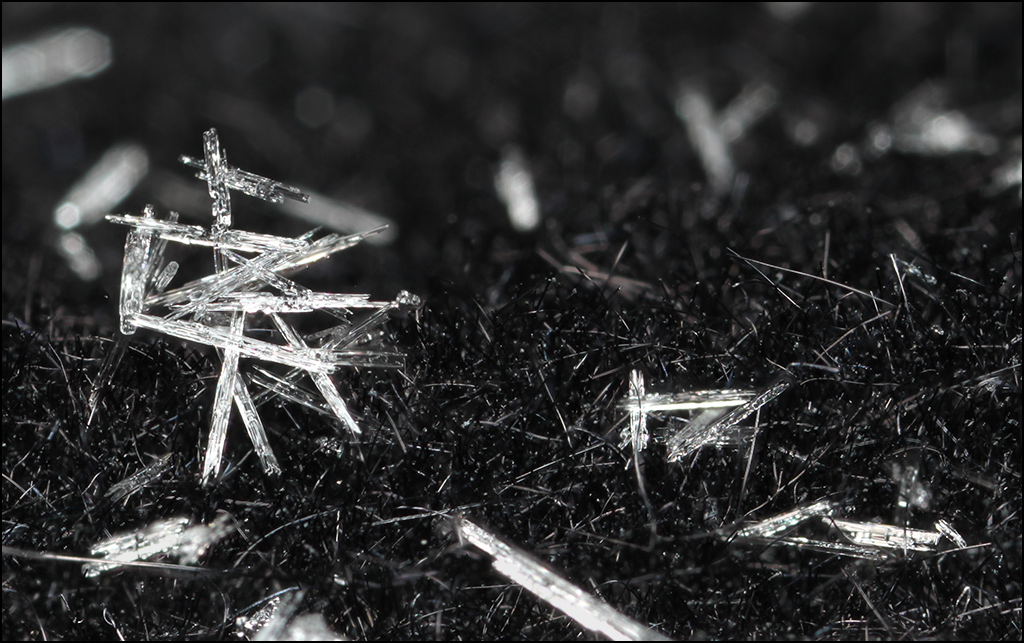 Finally, very near the end of the snowstorm, something hexagon-ish touched down. But I only saw the one. 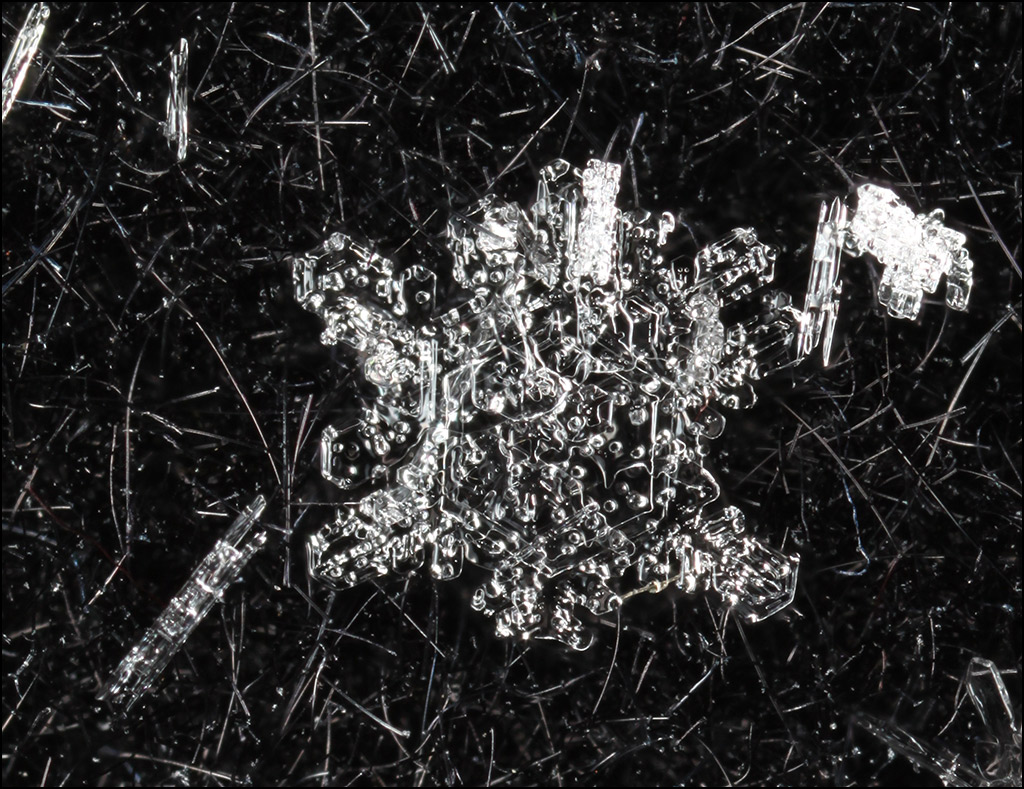 Canon MP-E 65 at 2X, Canon Speedlite 580 EX II with Opteka diffuser, short stacks handheld, ZS DMap. The second stack was a bit tricky because a late-arriving crystal knocked over a couple of others that had been photographed earlier.

Well, that was yesterday, and today's different. Here's what fell today: 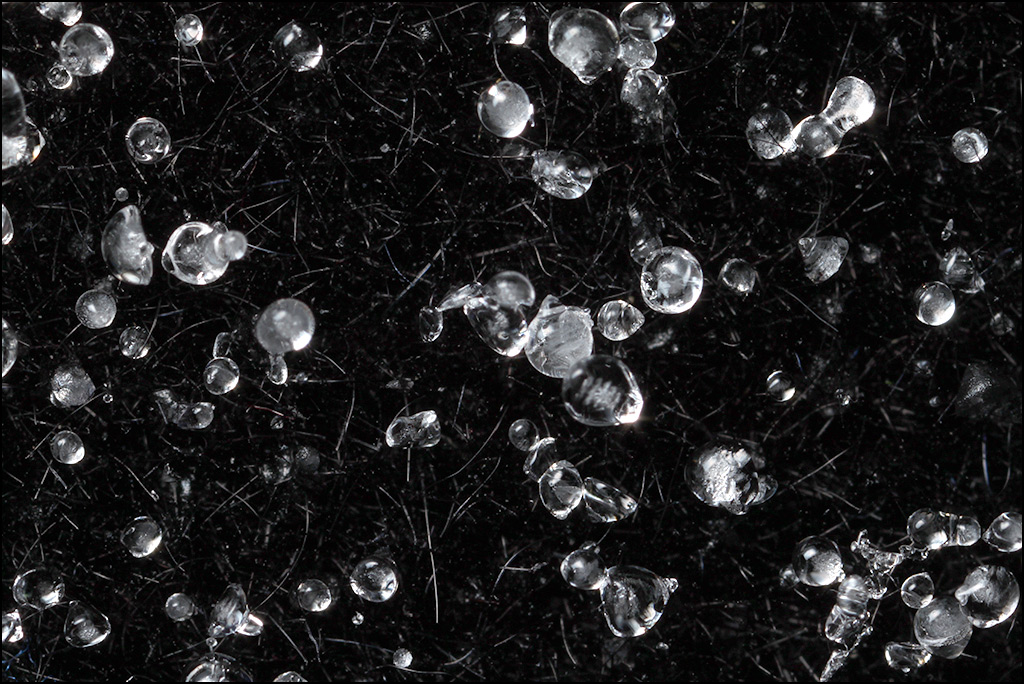 I guess maybe an inch and a half of this stuff fell, over the course of the whole day. It piled up like white sand, with the lower levels slightly adhered to pavement & concrete that had been shoveled clean last night.

The really interesting thing was how these little drops of ice interacted with those fine crystals from yesterday. Of course on level areas they just piled on top. But around edges they acted almost like sandblasting, taking what yesterday had been smooth fluffy blankets of snow and today turning them into eroded cliffs that continued to cut back as the day progressed. Here's a two frame animation, "2-1/2 hours in the life of a deck railing".

I envy folks who get attractive snow. Seems like all I get is "interesting". Oh well, I'll take it. Hope you find it interesting too!

I kept trying to get some flakes myself...on the little amount of snow that we got this year. Darn southeastern New Mexico winters. Might not have been your desired result, but I dig the "shattered" snowflake photo. Still pretty cool brotha!
If your photo lacks interest, you aren't close enough.
Top

Very nice, i have always wanted to do that, i hope you dont stop now it would be nice to compare them to even more sorts of snow and hear how they relate to the sticky/driftyness etc. It now seems obvious why the sand like snow is sand like but it had never occured to me it was the shape of the flakes, i had always thought it was just temperature and melting.

Hi Rik,
These are great images. I'm fascinated with all the different variety of snow crystals that form. Each snow fall is different and the type of crystal falling can vary from one minute to the next. The hex plates are the easiest to photograph because they are very flat, compared to the hex columns you shot. How many images are in your short stack? I've got to give that a try some time, the large death of field is awesome.

rjlittlefield wrote: Seems like all I get is "interesting". Oh well, I'll take it. Hope you find it interesting too!

In the UK this is known as "the wrong kind of snow". It comes in a range of forms and its principal function is to immobilise our public transport, notably the railways.

Harold.
My images are a medium for sharing some of my experiences: they are not me.
Top


nlamendo wrote:How many images are in your short stack? I've got to give that a try some time, the large death of field is awesome.

In the first post, they were 7, 8, and 4 frames, respectively. Shooting aperture was nominal f/8, so about f/24 effective.