I had occasion a few days ago to replace a defunct circuit breaker.

Of course I couldn't resist taking it apart to learn how it was supposed to work, and why it no longer did.

Here are the answers.

First, half of the breaker in its normal ON configuration: 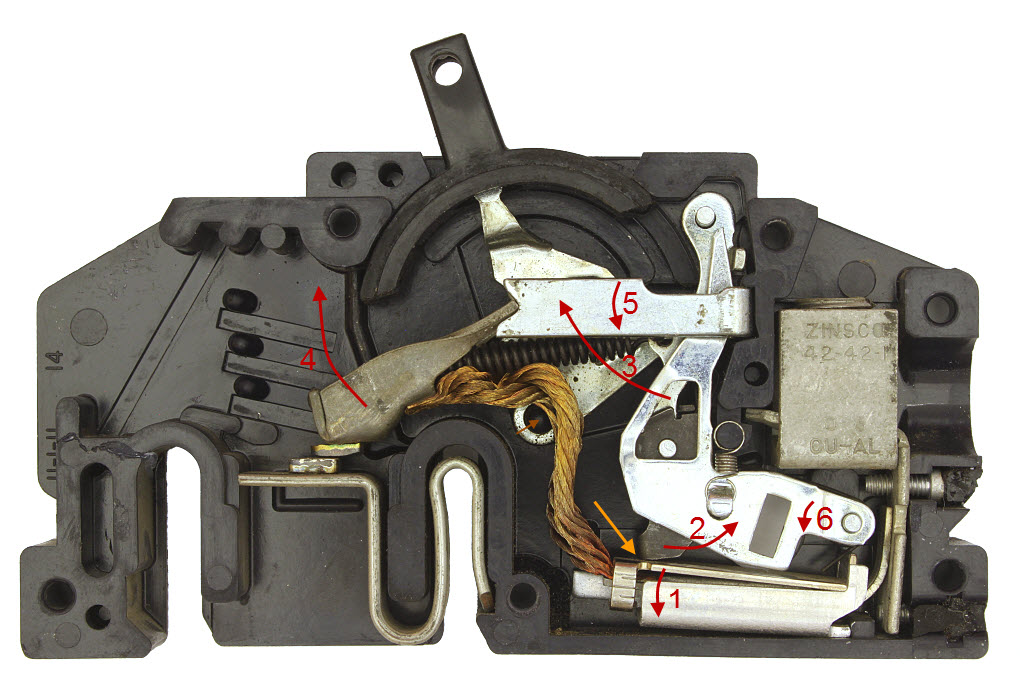 The orange arrow points to arguably the most important location in the whole breaker -- the place where the tripping action gets triggered. What happens is that under continuous slight overload, the thin bright plate below the orange arrow rotates downward, as shown by the bottom red arrow (1), driven by heating of a bimetallic strip. Or under instantaneous extreme overload such as a short circuit, it rotates downward driven by a magnetic field from the large current.

In either case, movement of the thin bright plate causes it to release the dark gray catch mechanism just above it, which is spring loaded to rotate in the direction of the middle red arrow (2). This rotation in turn releases yet a stronger spring-loaded lever, which rotates up as shown by the upper red arrow (3), carrying with it the end of the spring that holds the electrical contact in place. When that last lever rotates far enough, it brings the spring past center of the pivot that holds the electrical contact bar, and the bar then springs suddenly upward (4), breaking the circuit. (!!)

Simultaneously,the pivot of the electrical connection bar moves downward, driven by the same spring, carrying with it the bright U-shaped bar (5), which is connected to the external handle by a couple of little bent tabs on the farthest back metal plate. Voila, the breaker now indicates "Tripped".

Likewise, the release of the heavy spring-loaded bar (3) forces the bright bar with the fancy cutouts to rotate slightly downward (6), thereby jamming the thin bright trigger plate plate down solid and simultaneously forcing its mate on the other electric phase to do the same thing, thereby cutting off both phases at the same time and leaving both handles in the Tripped position.

To reset the breaker, you first push the handle firmly to its OFF position, which pushes all the mechanics back into place and re-engages the trip latch indicated by the orange arrow. Then you push the handle back to the ON position, which slightly repositions things so that the electrical contact goes smashing closed again under pressure from its really very strong spring.

This process is illustrated in the following animations, which show transitions from ON to Tripped, Tripped to OFF (and reset), and finally OFF to ON.

If you'd like more details on operation of the beast, it's described in fair detail in US Patent #2,502,537, currently accessible HERE.

Oh yeah... What made the breaker fail? Go back to the first picture and look for the little brown arrow just under the bend in the copper braid. That points to a pivot pin, molded into the plastic of the case. The pin broke off the other breaker of this pair, leaving no way to reset the breaker when it tripped. $178 for a new breaker, because a piece of plastic cracked. Isn't technology wonderful? Ah well, it was an old breaker, time to die anyway...

Interesting and pleasing to see, for a change, a technical subject well photographed. I had known of the bimetal inside, but not of the second mechanism via the magnetic field. Furthermore, I've learned some new vocabulary too from your post.

One thing that strikes me however, are the US$178 you've mentioned, because these "breakers" are quite cheap, and you can get 10 for about €20 over here. Or is $178 the sum your electrician charged for the whole service comprising call-out charge, material, hourly wage and all?

Have heard you about planned obsolescence?

This is a good example of a bad design of part ...And it seems very expensive replacement. It should not cost more than $ 20-25 ...
Top

That was a very expensive breaker.
Top

Planapo wrote:One thing that strikes me however, are the US$178 you've mentioned, because these "breakers" are quite cheap, and you can get 10 for about €20 over here. Or is $178 the sum your electrician charged for the whole service comprising call-out charge, material, hourly wage and all?

No, $178 was the price for the breaker plus sales tax, at one of the local big-box stores. 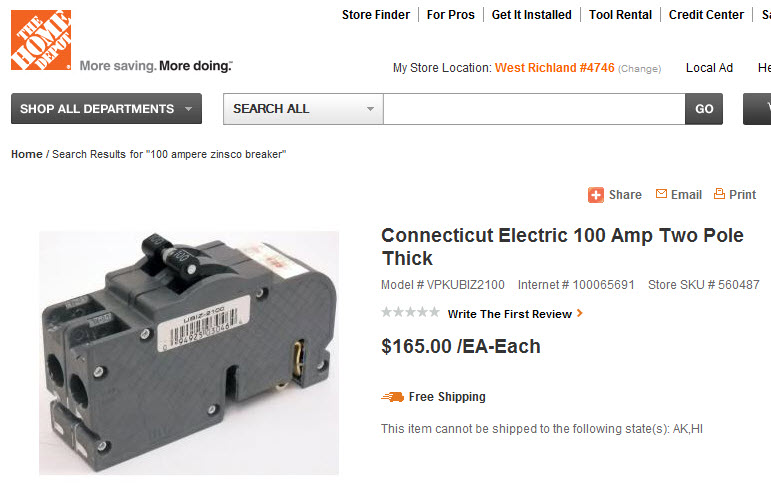 I'm sure it matters a lot that this is a plug-compatible replacement for an obsolete part. Home Depot also sells commonly used modern double-pole breakers for as low as $5.51, quantity 1.

But the one I needed had the misfortune to be literally the highest-priced breaker sold by Home Depot, and they were apparently the only folks who stocked it locally for retail sale.

Goodness knows what it would have cost to get an electrician to do the replacement. The last one I had look at this house sort of smiled and started talking about swapping out the whole panel.

Ah..makes sense. Obsolete and 100A 2 pole to boot. On the bright side you most probably won't be replacing it again.

The technique taught in the UK is to suck in gently through clenched teeth. It's a careful balance - too much and the victim ( sorry customer) suspects a rip off. You need just enough to make 'em think you're being considerate, reflective, sharing the pain.
"Sorry madam, two bodies and 23 appendages to support", just doesn't cut it.

Well and thoroughly checked, both grounding and isolation of the hot stuff. Standard operating procedure.

Apparently the newer generation of dual breakers, in addition to being less money than what you got stuck with, also do Ground Fault Circuit Interruption, and also, the very newest ones have some little chip quietly built into them, that can detect arcing on the load conductors.

These arc detectors, will trip the breaker (probably with some kind of multiple operation duty SCR crowbar) even if the arc fault current does not reach the current limiting rating of the breaker.

Like if unpotted connections experience wetness, or some kind of insulation failure short circuit, or appliance primary line internal short, or convenience outlet contact problems, to name a few things I can think of that might trip them.

Might actually be a pia, but may increment electrical safety upwards.
Top