I thought you might be interested how I shot the Flicker feather, posted over in Technical & Studio. 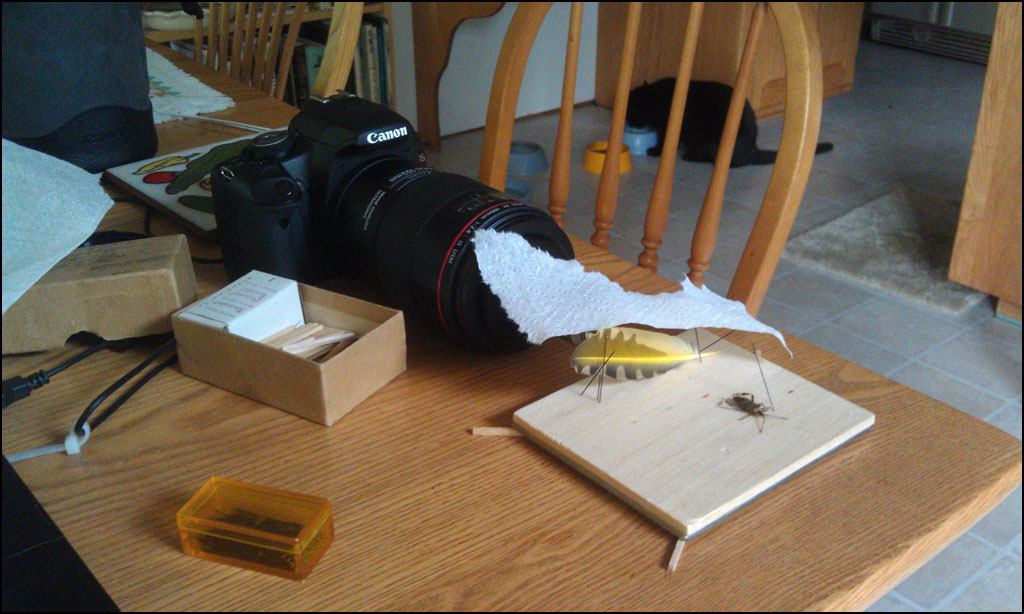 Yep, it's a bit informal.

You'll notice that there's no focusing mechanism in sight. That's because it's inside the big black lens: a Canon macro EF 100mm 1:2.8 L IS USM, internal focus, being driven by Canon EOS Utility. The camera is Canon T1i in Live View and hence EFSC (electronic first shutter curtain). There's a Nikon CFI60 10X NA 0.25 objective stuck on front of the 100mm, hiding behind the chunk of paper towel that's shading the objective from glare that would otherwise come around the subject.

Ambient continuous lighting (daylight, looking out through a patio door), 1.3 seconds at ISO 200. I fouled up and left the 100mm set at f/4 instead of opening up to its full f/2.8, so I got a little more vignetting than I should have. Not worth reshooting, though.

I was pleasantly surprised by how little trouble there was with vibration in this "setup". Nothing was fastened down and the table was in use by two people typing on laptops. The Live View was remarkably stable, and the actual exposures bore that out: 5X on sensor, sharp at actual pixels with a 1.3 second exposure. I think this is a case of camera and subject moving in unison. Certainly things were moving, since when I took the first few test exposures, the subject slid sideways every time the mirror cycled. That stopped after I tightened up a couple of the pins, and then there were no further problems. 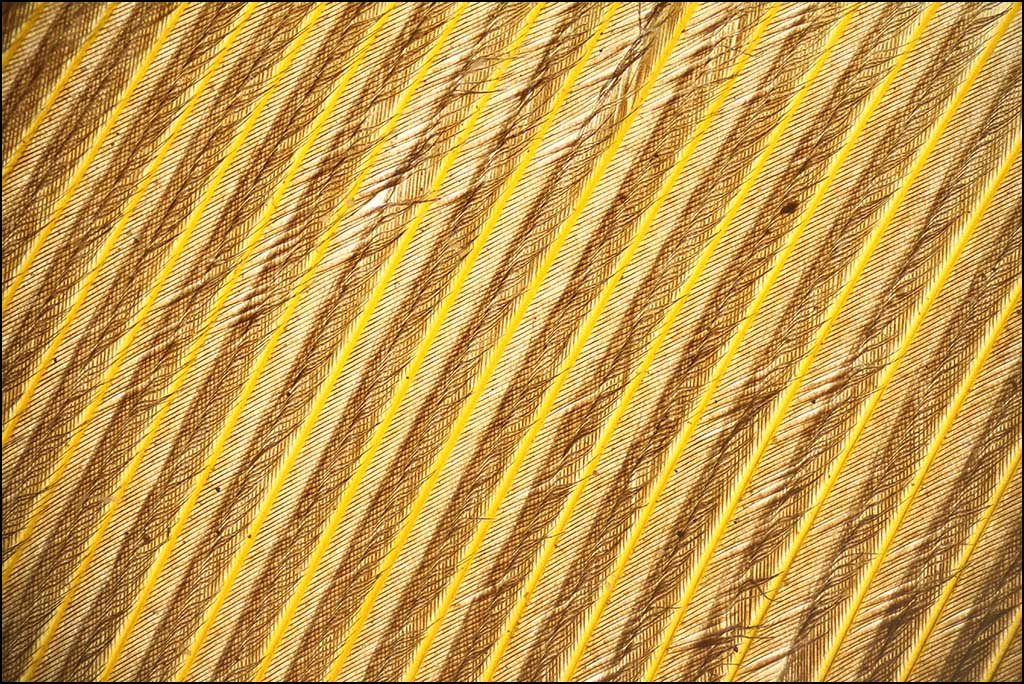 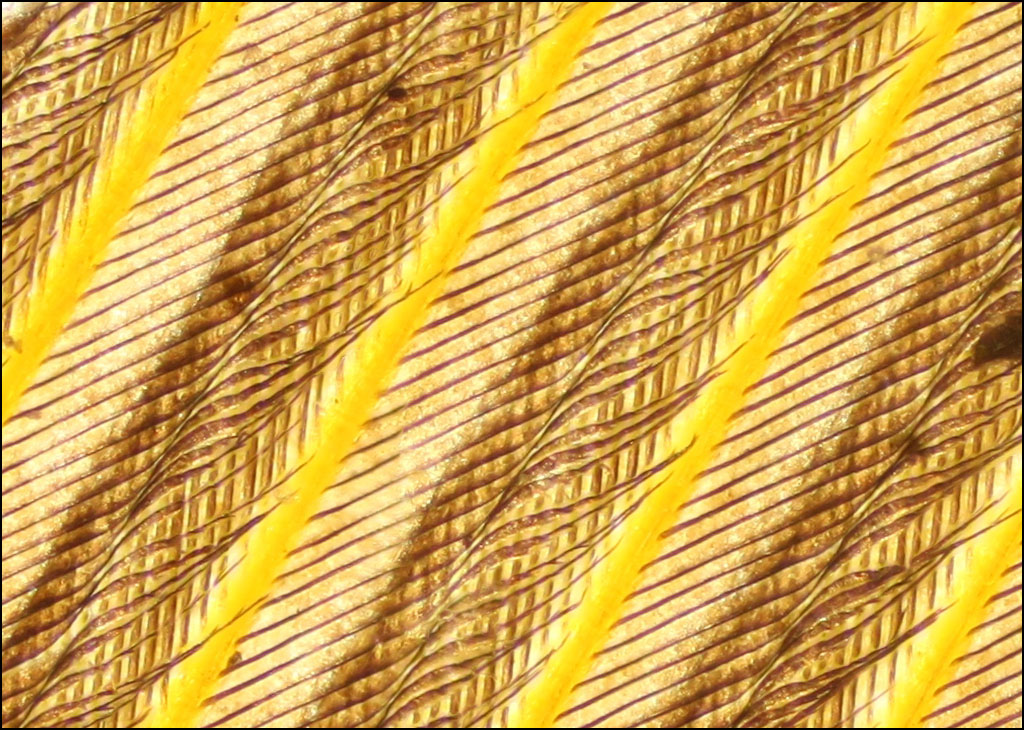 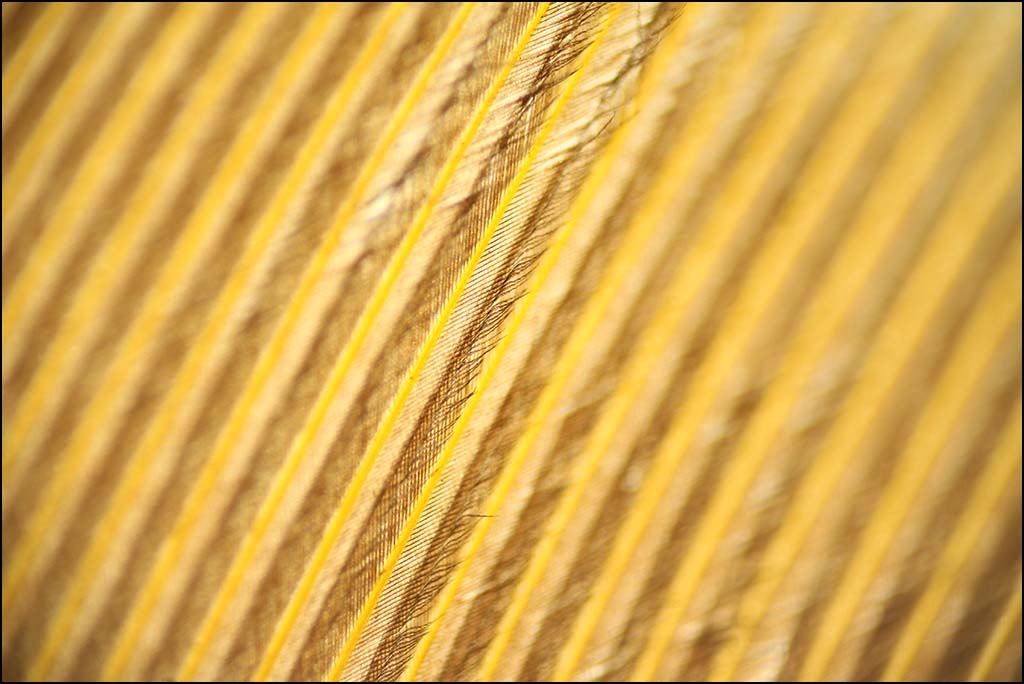 Dag bust it, Rik--must you make it look so easy? How are those of us with highly engineered rigs going to maintain any semblance of pride?

Seriously, you've demonstrated an interesting, and to my knowledge, quite innovative, approach that is inexpensive enough for lots of people to move into macro realms they've never been able to get to before. Wonderful!

While my own interests are in rigs that facilitate high throughput, quick workflow, and repeatability--there have to be lots of people who would like to make high magnification images on a budget. This, and other demonstrations of yours, move this forward, and should help place high magnification photography within the reach of far more people. Wonderful!

I'm surprised that there has not been more response to your post--as you've demonstrated, I think, a novel paradigm.

Cool, not only that this, as Chris has mentioned, makes high mag shooting more easily accessible to first timers, it also is a great way for shooting on the way while on field trips or vacation without the studio equipment at hand. So thanks for publishing your experiences, very much appreciated.

BTW, so that true bug on the table wasn't a hidden clue regarding the "waves in bronze" riddle and Charlie and I were misled!

And gosh! I count four pots to choose from, don't you think you're spoiling that kitten a bit?! I just hope there wasn't "flicker" on her menu!:lol:

Now got to go to look up what kind of bird a "flicker" is.

Good image, excellent detail. Appears to be a little sharper in the center.


I fouled up and left the 100mm set at f/4 instead of opening up to its full f/2.8, so I got a little more vignetting than I should have.

Was the lens infinity focused? I recall a similar experiment with the non-L version of this lens and the CFI60 10X objective; in that exercise there was slight vignetting even when the lens was set to infinity focus and the aperture at f/2.8. I'd be interested to know if the 'L' version exhibits no significant vignetting @ f/2.8 on a 1.6X sensor. I could run the exercise myself; but my cameras currently have other glass and things attached.

Our Ever-Feeding-Silent-Cat is tabby. Would it still work?
Top

Lets see a stack of that assassin bug!

Hmmm....I think I saw something about this not that long ago.
Top

Thanks for all the comments.

I can't claim a lot of originality here. The possibility of internal focusing with a telephoto and a microscope objective has certainly been talked about before, as has pretty much everything else in here except the possible significance of cat color. I've played around with internal focusing since I got the 100mm L IS USM, but never got around to shooting a full stack until this one. Results from this stack were very interesting -- mostly in how well it worked given the casualness of the setup -- so it seemed like time for a post.

It's unclear to me how this method fits in with other more traditional approaches. First off, it really requires a tube lens with internal focusing. If the front of the lens advances with focus, then the increments are likely to be too large to get a good stack. Certainly that was the case when I tried my standard setup using Canon's 55-200mm kit lens as shown HERE. Then the tube lens has to play nicely with the objective, which adds more constraints on focal length, aperture size and placement, etc. The setup shown here works well only because that particular Nikon objective has such a wide field that it actually covers an APS-sized sensor even when used at 5X as shown here. And finally, there's the catch that internal focusing pushes the objective off its design point, which will add aberrations that probably become unacceptable at higher powers. All in all, given my current kit I'm afraid that this particular combination is the only one that would actually work! Still, I may end up hauling out this combo from time to time.

Betty and yeatzee, indeed the true bug on the table is the same beast I showed over in the puzzle thread, Waves in bronze. I'd love to take credit for being so subtle about the clue, but in fact it was completely accidental -- I didn't even notice the bug in this thread until after I had posted! It's not an assassin bug, by the way, though I did think it was when I was photographing it. It's actually one of the "leaf-footed bugs", family Coreidae.

Craig, the upper left corner of the full frame is blurred because my battery gave out early. The stack goes back far enough to make that area recognizable but not sharply focused. Other than that, the corners seem to be pretty sharp. Here is an actual-pixels crop (out of 4752x3168), from the closest corner that got focused: 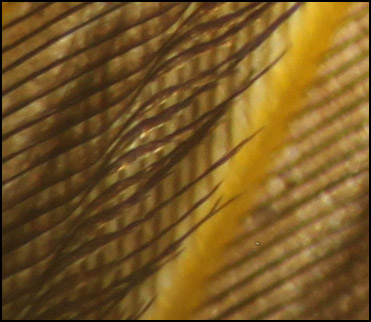 About the vignetting, yes it does depend on focus, but it's pretty small at f/2.8. Here is a set of tests I just ran: 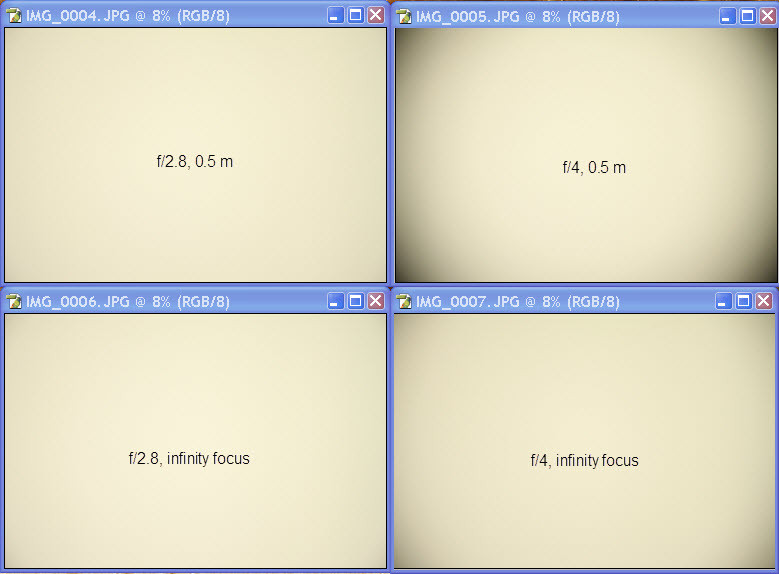 To shoot the stack, I adjusted the subject position so that the farthest parts were just a little closer than infinity focus, then focused closer from there. As best I recall, that meant closest focus was at about "1 m" on the rear lens, so if I had remembered to set f/2.8, the vignetting would have been pretty minimal by my standards.

Rik,
excellent test, thanks for posting it. I will try it some day with my 70-200.
Pau
Top

The Western Conifer Seed Bug behind the feather is missing a leg...

The result is quite impressive

Many thanks sharing this.
Regards

The following case illustrates some limits of the internal focusing approach at higher magnifications.

Setup is essentially the same as shown above, but this time the subject is a small fly wing, the objective is a Nikon CF Plan 50X NA 0.55 inf/0 EPI WD 8.7 (25X on sensor), and the illumination is bounced flash: 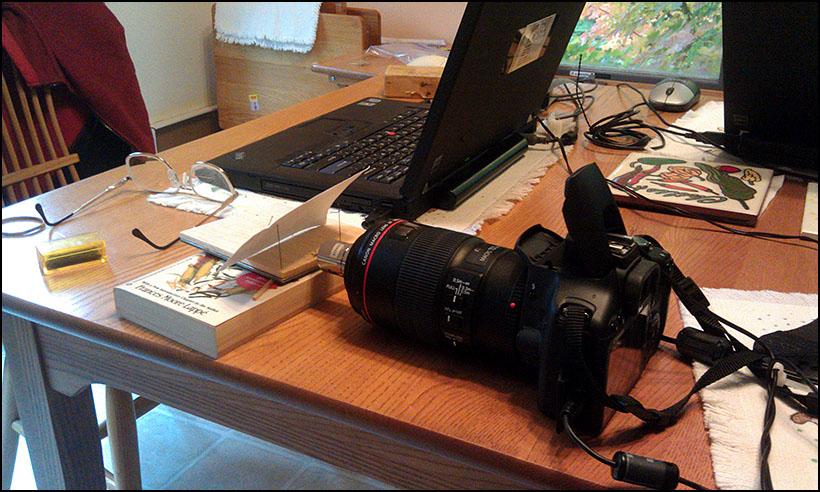 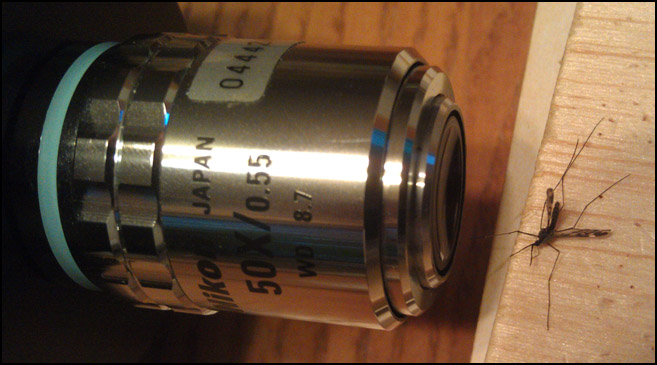 Here is the full frame: 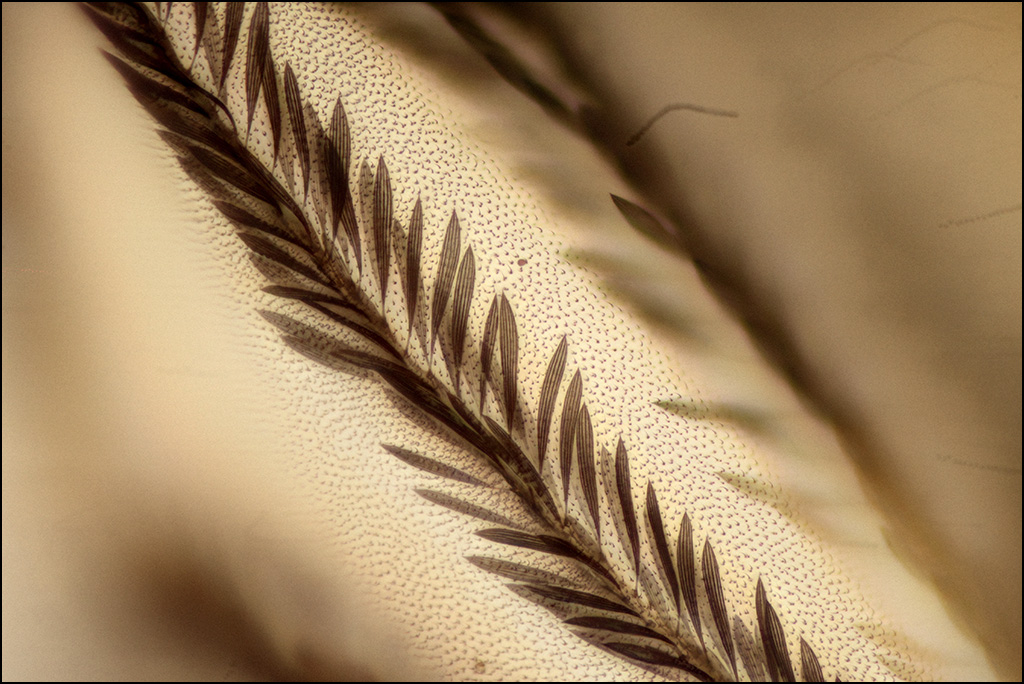 And here is a crop from the original reduced to 50% of actual pixels: 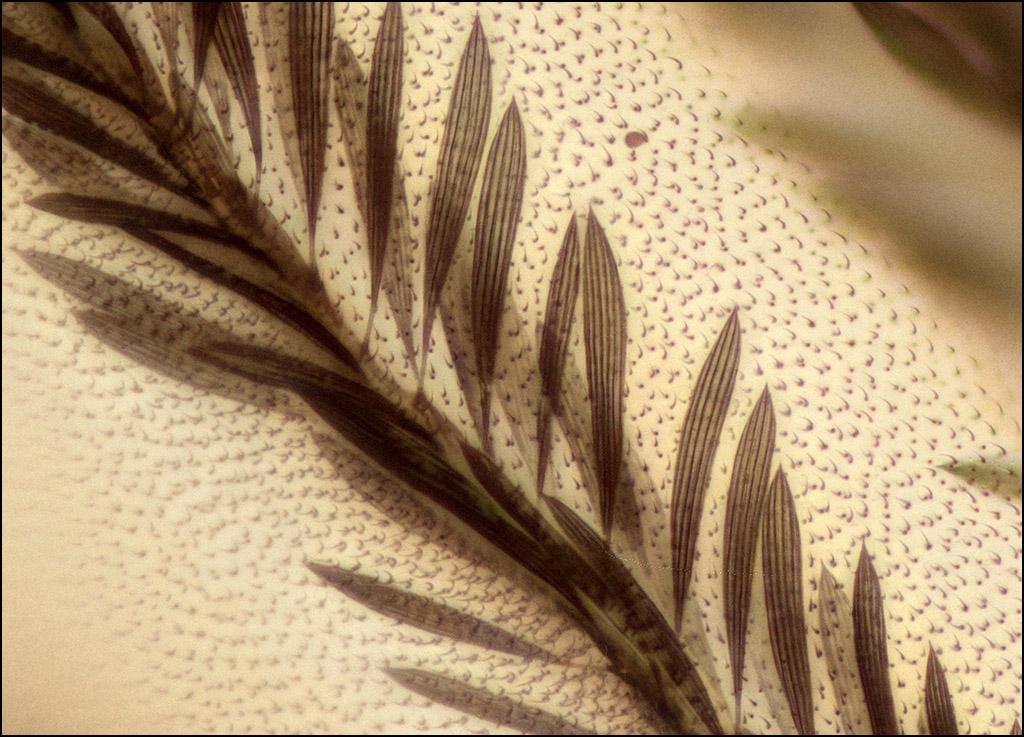 Notice that the small hairs on the membrane are crisp on the right side of the focused area but soft on the left. That's not because there's something different about the hairs. It's because the left side is closer, and focusing by adjusting the tube lens has pushed the objective way off its design point. This is equivalent to having a huge error in tube length with a finite objective. The result is to introduce a lot of spherical aberration, with corresponding loss of resolution and contrast. Essentially, the right side of the focused region was shot with a lot better optics than the left side was.

I can put this into perspective for stacking as follows. The step size was 1/55 of the total range of the tube lens, accomplished by one push of the "<<<" button in Canon EOS Utility. There is little or no focus banding, but skipping every other frame produces obvious banding, so this step size of one <<< is roughly optimum. Now, of the 55 steps, roughly the first 20 are equally sharp but then they start obviously falling off. Depending on how picky I feel, maybe the first 40 frames would be worth processing. So, at this magnification and NA, my stack can only be a total of 40 DOF's deep. Contrast this with conventional stacking, where it's now becoming routine to shoot 150-300 frames with no more than minimal overlap. Big advantage to the conventional approach at higher magnification. Still, 40X improvement in DOF using a camera sitting on a kitchen table...

I'm gonna have to think about this.

Added... I'm not sure what the subject is, so in the interest of getting an ID at some point, here's another picture of the same beast. This one is a handheld stack, MP-E 65 at 2X, full frame on Canon T1i, so about 11.2 mm wide. 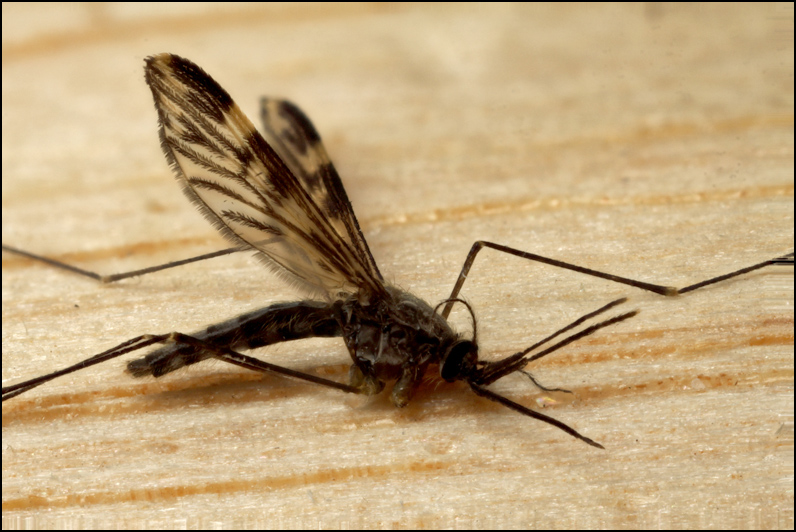