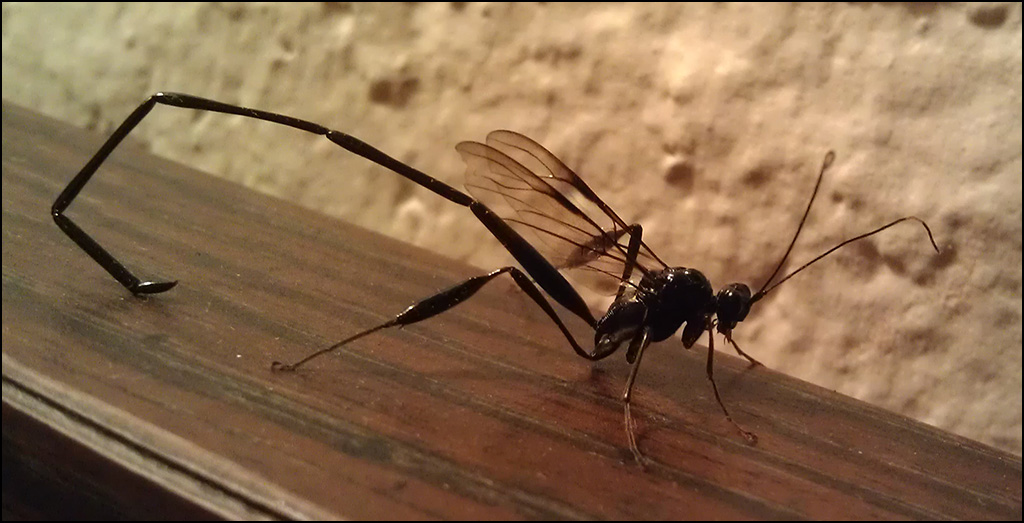 Fort Collins, Colorado. I saw a couple of these flying around today but couldn't get close enough to tell for sure what they were. Looked like either the longest skinniest damselfly I had ever seen, or perhaps some predator hauling around the longest skinniest damselfly I had ever seen. But when I arrived back at my hotel room tonight, danged if one of them didn't come to rest on the hood of my car! So I nabbed it in a small plastic cup and relocated it indoors where I could photograph it.

The image shown here is again by HTC Droid Incredible 2, continuous illumination from a desk lamp. No manipulation other than resizing for posting. I don't know what causes the variation in color balance across the frame.

Species ID is Pelecinus polyturator, also known as the American Pelecinid wasp. It is in family Pelecinidae. I had thought Ichneumonidae, and actually found the critter by doing a Google image search on ichneumon wasp colorado. But they are actually separate even at the level of superfamily.

The female uses her long abdomen to deposit eggs in the soil near burrowing June Beetle Grubs. The larval wasp then feeds on the beetle grubs.

Wikipedia adds the interesting snippet of information that

Pelecinus polyturator is parthenogenic; females do not require fertilization by males to reproduce. Females are common throughout its range, but males are quite rare in the United States and Canada, and more common farther south.

and on a different page, that

The genus Pelecinus is the only living member of the family Pelecinidae (there are also two fossil genera), and contains only three species...

This is a large wasp: 55 mm total body length from head to tip of tail.

I hope you find this as interesting as I do. I am often surprised by what I find when I track down information about the critters that attracted my attention just because of their appearance.

I found an identically shaped wasp the other day, only it was golden colored. My friends little brother killed it when I went to grab a cup

Very interesting indeed, Rik. I've occasionally seen something that looks like this, and will take a closer and much more informed look next time one happens by. Glad you shared!
Top

Not something I've personally seen before; not that such a personal comment has much meaning in the grand scheme of things...
-------------------------------
The general public seems to associate such a long tail with catastrophic risk to people of stings, whereas in reality it usually means that the bug is simply a parasitic wasp fo some sort, not an immediate threat to people.

Almost as bad as trying to convince the general public that many/most of the bugs flying around flowers are merely hover flies!
-Phil

I hope you find this as interesting as I do.

Yes, of course! What a bizarre morphology that wasp has! And wasn't it for your posting, I most likely would never have heard of and seen a pelecinid wasp in my life. As (quote wikipedia: Pelecinus) "The genus Pelecinus is the only living member of the family Pelecinidae (there are also two fossil genera), and contains only three species restricted to the New World."

So thanks for that!

After shooting photos, I saw a couple more of these beasts in the wild, flying around in the daytime. They gave me the same impression I had before -- either the longest skinniest damselfly I'd ever seen, or some predator carrying such a damselfly. But no, it was just these crazy long wasps struggling to go about their business. The ones I saw were certainly among the worst fliers I have ever seen. One of them sort of crash-landed on a mowed lawn and almost flopped around for the better part of a minute until finally it got into a location and posture that enabled it to take off successfully again. But obviously they've found a niche that's big enough and stable enough to make a go of it. If there are fossil genera, they've been around for quite some time now!