Some days ago, I posted pictures of some "Spruce budworm caterpillars and parasites."

A fellow on one of the Lepidopterists' Society mailing lists saw that posting and sent me these pictures and a brief explanation.

Last week I was able to take photos of a large number of western spruce budworm moths at the Ford Dealership in Salmon, ID. ... There is a large outbreak in the area (from Lost Trail Pass south on 93 to Stanley, ID). Douglas-fir, subalpine fir and lodgepole pine are experiencing high defoliation levels (50-100% loss of new shoots). The forest service, region 4 has issued pest alerts for budworm as well as Douglas-fir tussock moth and mountain pine beetle in this same area.

If I heard correctly, this infestation of budworms is coming on the tail of the other infestations, so trees in that area have gotten hammered hard for several years in a row. It's not a happy situation.

I thought you might enjoy seeing how dense congregations of the adults can get, and how much variety there is in the adult moths. 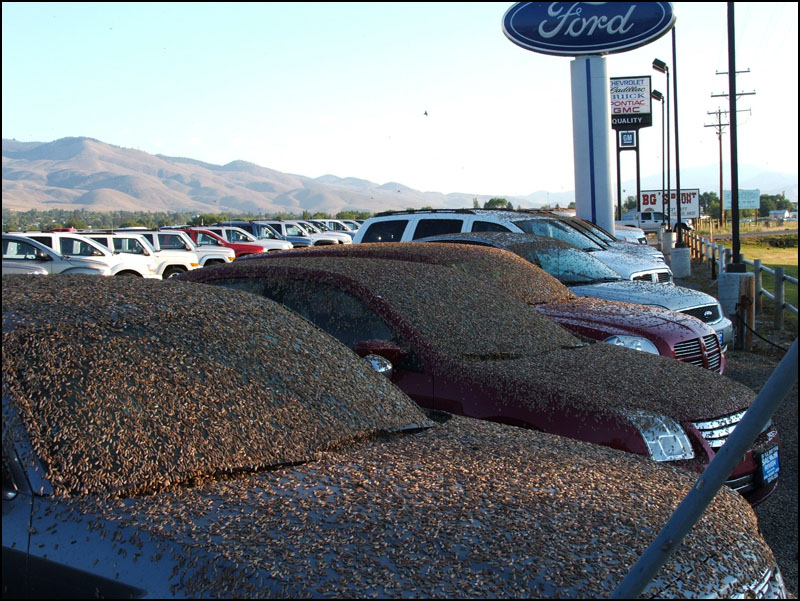 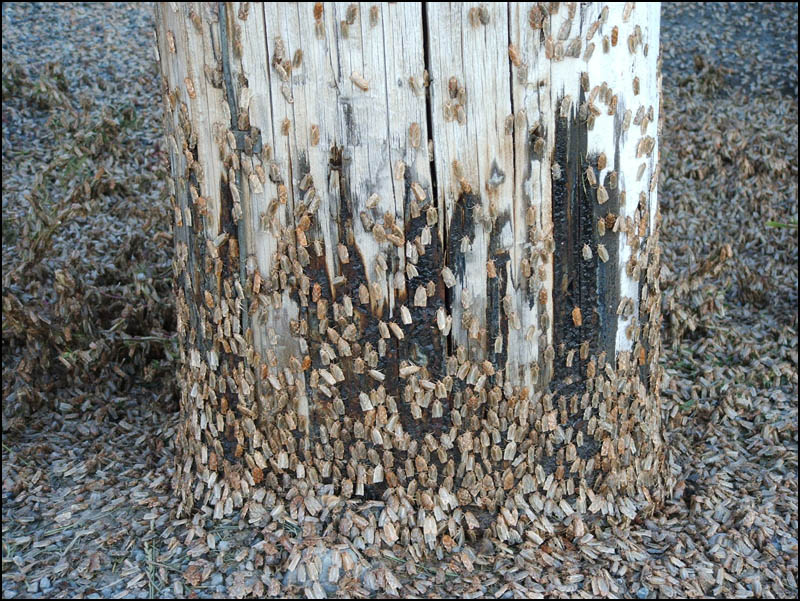 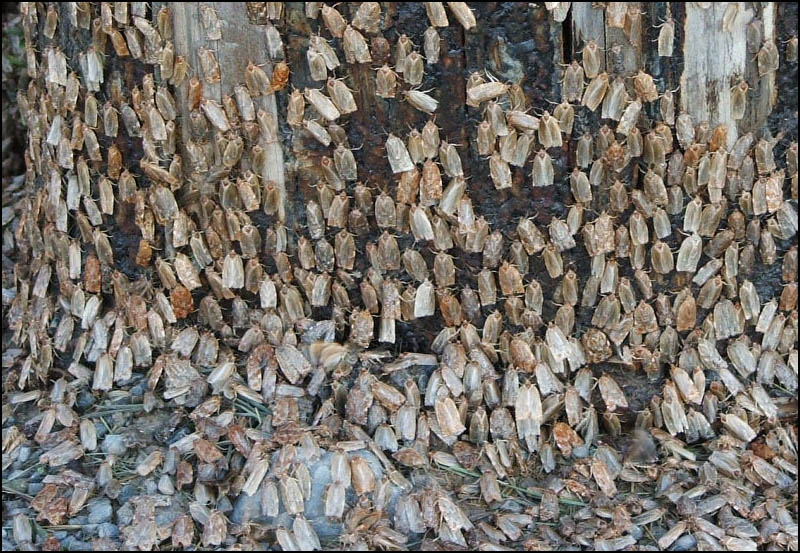 Oh good grief, they think they are a car cover

Impressive display there Rik. Reminds me of a Mayfly swarm. So these are Douglas-fir tussock moths?

I don`t think we have enough Parasites

These are very disturbing pictures Rik...it usually means something is terribly wrong and something is not in balance. I think I read somewhere that the trees are being stressed by the climate or drought and the insects are taking advantage of this fact. Reminds me of when I was a kid on long Island, one year it seemed it was snowing gypsy moths (another one of mans mistakes)

Thanks for sharing the info with us Rik.
Here is a perfect example of what I am talking about...Todays news!! http://news.yahoo.com/s/ap/20060808/ap_ ... h_invasion I am sure if you are into nature...you know whats going on

Ken Ramos wrote:Impressive display there Rik. Reminds me of a Mayfly swarm. So these are Douglas-fir tussock moths?

No, these are spruce budworm, the adults of the caterpillars I posted. See here and here for info/pictures about Douglas-fir tussock moths and their caterpillars.

This is a wild set of photos--Thanks for sharing these!
Top

Well, I'm not sure whether it'll make you feel better or worse, but I've come to understand there are almost always either too few or too many parasites, and the system is almost never "in balance".

That's because predator/prey systems hardly ever have stable equilibria; they have at best stable cycles of fluctuations. Usually the fluctuations don't even form completely stable cycles. We don't have space here to get into the math, but suffice to say that it's easy to get chaos even in an apparently trivial model involving just one prey species, one predator species, no noise or randomness, and no external stimuli. (Sound crazy? Write now for free details!

Some years ago, I slogged through a book titled "Do Lemmings Commit Suicide?: Beautiful Hypotheses and Ugly Facts". The bottom line was that despite decades of intense study, nobody really understands why lemmings and voles have population booms and busts.

I imagine these forest situations are even more complicated. The parasitoids that I photographed are primary, feeding directly on the caterpillars. Jeff says that there are secondary and tertiary parasitoids as well (that is, parasitoids of the parasitoids of the parasitoids). I'd expect that below those there are bacteria and viruses, all told producing a horde of feedback loops. So the system is going to fluctuate -- the questions are when, how much, and what to do about it? From a quick scan of web pages talking about strategies for managing these infestations, the focus seems to be on treating the system now and again to damp the fluctuations and/or cut short an emerging spike before it gets out of hand.

My hat is off to the people who figure out how to deal with these issues!

There's certainly a very real problem that you mention, of people changing the system so that it's less stable than it used to be.

But it's also a bit of a trap to think that all fluctuations are somehow unnatural. Booms and busts are part of the way things work.

For some reason, all this reminds me of sun spots.

Love the title of that book. You said you slogged through it, was it that bad, boring, or what? A catchy title I must say but it sounds interesting.

rjlittlefield wrote:
Some years ago, I slogged through a book titled "Do Lemmings Commit Suicide?: Beautiful Hypotheses and Ugly Facts". The bottom line was that despite decades of intense study, nobody really understands why lemmings and voles have population booms and busts.

"Slogged through" isn't a strong recommendation, but based half on the title, and half on your description, I ordered a copy of this from amazon.com. Used ones are pretty cheap (about $8 including shipping).

From what I've read about systems, even with VERY simple systems, you can have some incredibly elaborate interactions. For orbits of planets, I understand they can't actually do a description to the last decimal place of the relationships between even three individual bodies, except for a few very special cases (look up LaGrange Points for an example of one). Though they do manage to do it well enough to fly spaceships there, and even to predict where a new planet will be in one or two cases.
Top

Mike B wrote:"Slogged through" isn't a strong recommendation...

That phrase was carefully chosen. The title is great. As were sections where the author stood back and tried to summarize and interpret. But as I recall, most of the text was, um, highly detailed. I would refresh my memory, but I have buried my copy so deeply that I don't stand a chance of finding it. It may actually have gotten donated to the library -- an "honor" that I bestow on frighteningly few works.

It has been a long time since I read the thing.

Mike, I will be interested to hear your impressions. Perhaps I was just having a bad few weeks.

Mike B in OKlahoma wrote:From what I've read about systems, even with VERY simple systems, you can have some incredibly elaborate interactions. For orbits of planets, I understand they can't actually do a description to the last decimal place of the relationships between even three individual bodies, except for a few very special cases (look up LaGrange Points for an example of one). Though they do manage to do it well enough to fly spaceships there, and even to predict where a new planet will be in one or two cases.

For the three-body problem, it's more precise to say that:

1. It's impossible to write down a closed-form symbolic expression using well-behaved functions, that tells you where the bodies will be at an arbitrary time.

2. The system is "chaotic" in the formal sense that small changes in initial conditions grow exponentially over time, so that after a relatively brief period, two trajectories that started very close to each other will be so far apart that they become uncorrelated.

See http://www.upscale.utoronto.ca/GeneralI ... /Chaos.pdf for a good introduction to the topic.

If you want to actually play with a very repeatable chaotic system, go visit http://www.emsl.pnl.gov/docs/mathexpl/ and work your way down to downloading the Excel workbook that simulates the Magnetic Pendulum. (You'll have to enable macros to run it.)

"Chaos" On a Desktop

An interesting aspect to the numerical simulation is that it clearly demonstrates that the pendulum system is "chaotic". This means that the path of the pendulum is extremely sensitive to small changes in position or velocity, with any little change growing exponentially (multiplying) over time. In the example, two pendulums are started less than one-millionth of an inch apart, yet their trajectories soon diverge until they bear no resemblance to each other. If you make the starting difference smaller, then divergence takes a little longer, but it still happens. In fact, complete divergence still occurs quickly even when the starting points are separated by as little as one millionth of the width of an atom! This explains the observation that no matter how hard you try, you simply cannot get the physical pendulum to trace out the same path twice. (This behavior is shared by most balls that bounce freely, from billiards to pinballs to basketballs on the rim.)

Playing With The Workbook

The Magnetic Pendulum workbook runs in Excel 5.0 (or higher) on both PC and Macintosh platforms. You can download a copy of it to play with.

The workbook has suffered a bit over the years as Excel has evolved, but it still runs well enough that it's not worth my trouble to fix.

That was a very educational project. More so for me than the kids, almost certainly, though some of them benefited too.

I certainly had no clue when I did it, that it would eventually relate to discussion of spruce budworm infestations in a photomacrography forum! There are strong relations between that fact and chaos theory itself, but I'll forego the opportunity to explore them here.