Reflections of reality (in the eyes of a jumping spider)

Reflections of reality (in the eyes of a jumping spider)

Recent discussions [1, 2] about reflections in the eyes of a jumping spider prompted me to explore the issue in more depth. It's been an amusing exercise, but now it really is time for me to post something out before I get distracted yet again and nothing ever comes of the effort.

As previous mentioned, the eyes of a jumping spider act like mirror balls. 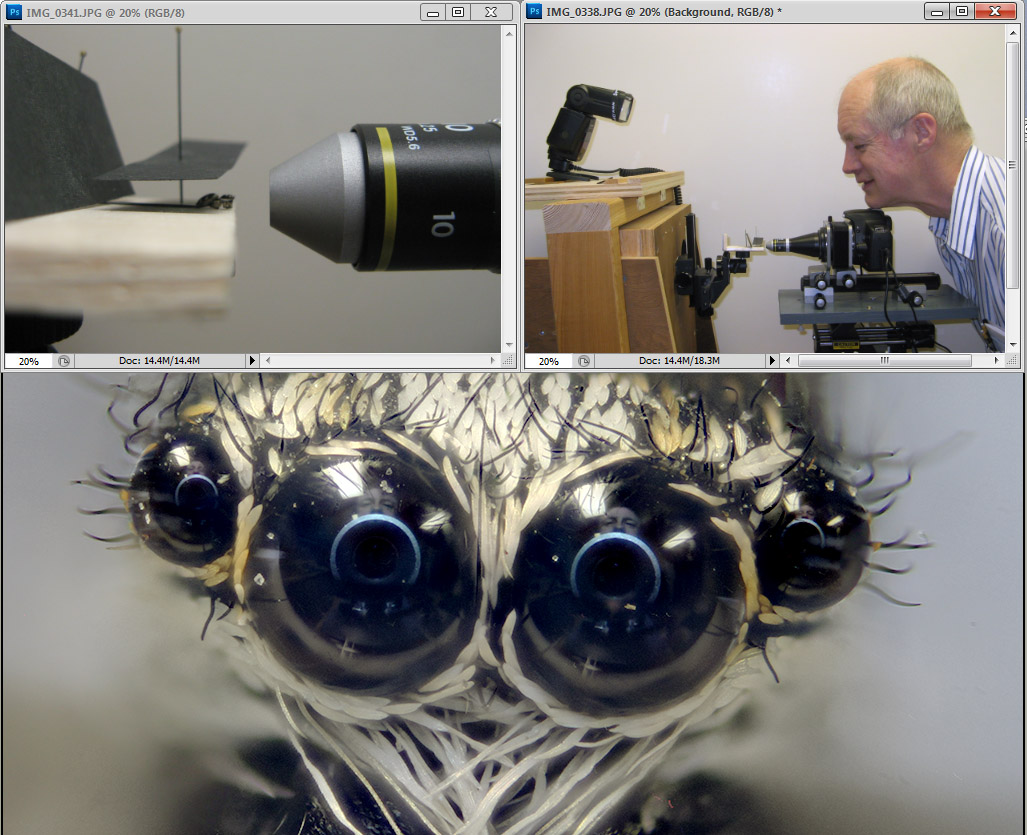 Notice in particular that the spider is positioned at the edge of a balsa sheet, and the sheet itself is clearly reflected in the spider's eyes.

Meanwhile, the face of your earnest investigator, standing patiently with his chin on the hot shoe of the camera, occupies only a small portion of the reflected field.

It may be amusing to contrast the actual reflection shown above with the artist's conception recently posted in another thread.

On reflection (pardon the pun...), what comes to mind is
CAUTION: Objects In Mirror Are Closer Than They Appear! 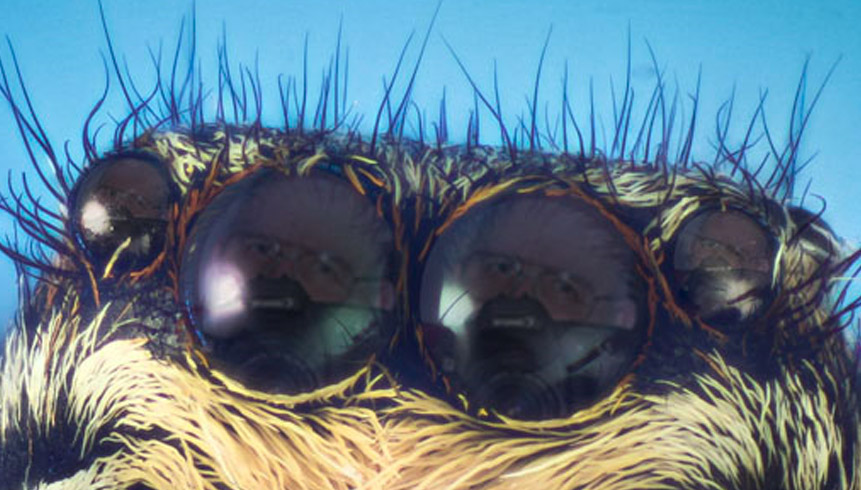 On a more serious note, I also shot the critter with a variety of illumination setups , including the classic pingpong ball, a large diffuser sitting over the subject, the same diffuser at the end of the objective, a bit farther back, on a tripod farther yet, and finally without the diffuser as far back as the cord would reach. I also used a couple of different objectives and played around with masking one objective when there was a distracting reflection from its shiny chrome barrel. 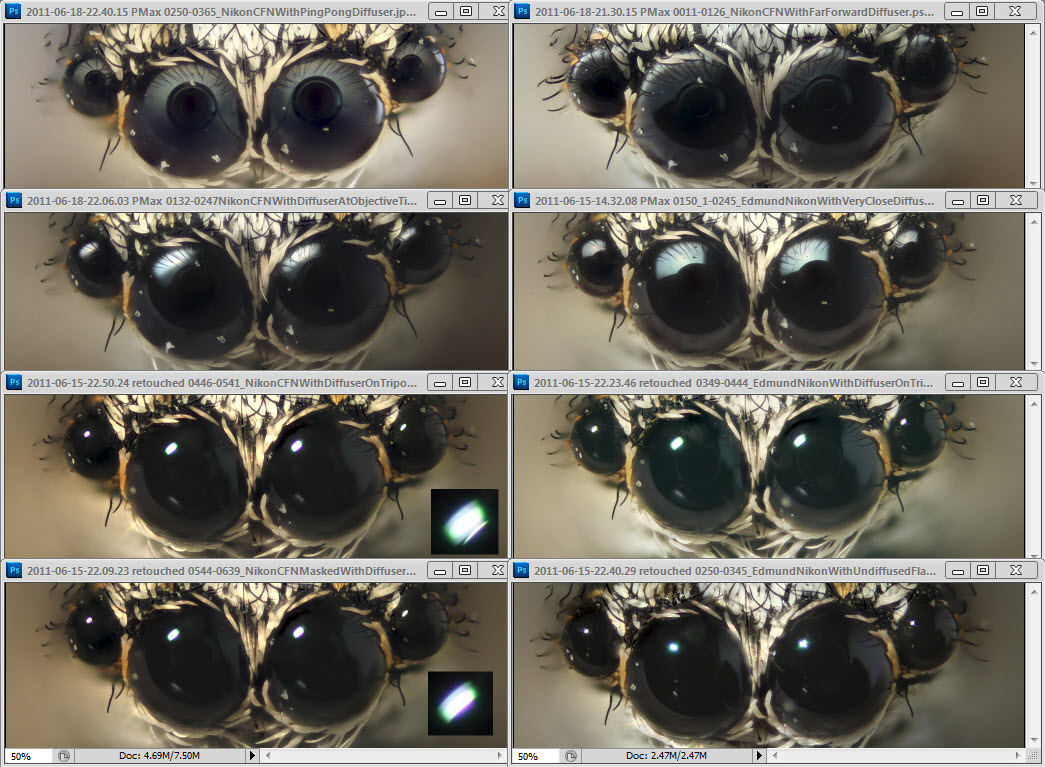 I won't bother to show the details of all the lighting setup at this point. But I would like to illustrate one particular setup that seems especially effective: 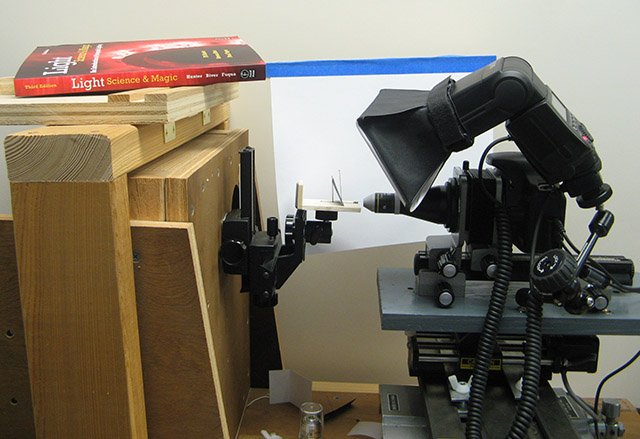 If you read carefully the names of the images as shown in the title bars, you may notice that the last four images say "retouched" while the first four do not.

That distinction is important.

What happened in these tests is that when the illumination was quite diffuse, the stacking process produced a good result by itself, but when the illumination was not diffuse, the stacking process produced very bad artifacts that needed heavy retouching. In each of the images that says "retouched", the stacking result had such serious artifacts around the highlights that they were completely unacceptable. In those cases, I essentially replaced the eyes with the most attractive single-frame rendition. That resulted in a sharp reflection, but at the cost of losing surface detail.

For myself, the main conclusion is that for this type of subject I'll use a single flash with a fairly large diffuser, placed as close to the subject as I can without directly illuminating the front of the lens.

I hope this is interesting and helpful. More later, time permitting...

PS. Yes, the first panel was shot with some unusual illumination. To get a really bright reflection, I arranged to illuminate the subject by ambient room light while using a bright flash to illuminate the front of the objective and my own face, but not the subject. The reason you don't see a flash cable plugged into the camera is because it's plugged into a different control box that allows for long shutter with EFSC for the ambient exposure, combined with flash in the middle of the long exposure. Some people may be interested in that aspect, but that's for another day.

Thanks for the detailed project.

How does the 'family of angles' figure in this outcome?

P.S. I almost didn't recognise you without your glasses and micro-switch hat.

Rik, thank you for this elaborate investigation. I could not find any jumping spider so you're ahead of me. I quite stirred up something here.
I must admit pasting in John's head was a quicky: cut, mirror, paste, adjust opacity, without including any real world reflection, other than mirroring.

Nice to see you and your setup , I understand that the whole setup can be changed from horizontal to vertical?

In the summary , when top row numbered 1 & 2, I like 2, 3 and 4 best, but thats a matter of taste.
When and if I find a bug or spider with reflections I'll try one of your used methods, other than the all-covering soupcup.
Fred
Canonian@Flickr
Top

canonian wrote:Rik, thanks for this elaborate investigation. I quite stirred up something here.

I think this is a case of many cooks improving the broth. Matthias posed a question, Chris S and I composed answers at the same time but from different viewpoints, and from there the discussion was off and running. Your Photoshop work was a valuable contribution -- most appreciated!

This project had been in the back of my head for some time; many aspects of the discussion prompted me to start actually doing it. Then of course I got caught up in the mindset that "Anything worth doing is worth overdoing!"

Anyway I went kinda crazy looking at various aspects of the problem. The majority of those are barely mentioned here.


I must admit pasting John's head in was a quicky: cut, invert, paste, adjust opacity, without including any real world reflection, other than mirroring.

The cut and paste was an interesting approach that had not occurred to me before you showed it.

For me the results triggered a vague feeling that something wasn't quite right, but it took me a long time to figure out what the issue was: the eyes looked too flat.

Then I got to wondering just what they really would look like. I knew the eyes would act like shiny balls, producing some sort of fisheye perspective, but I didn't really know how much fisheye. That would depend on the curvature of the eyes -- how much of a full sphere the front of the eye comprises. Time for an experiment!

Several experiments, as it turned out. More and more interesting aspects kept turning up, until finally the effort was at risk of running out of time with nothing written up. So I decided to stop exploring and start writing.

#3 is my personal favorite (2nd row, left side). Not coincidentally, that's the one corresponding to the lighting setup I show. It's a different objective, but that doesn't affect the image very much.


Craig Gerard wrote:How does the 'family of angles' figure in this outcome?

"Light: Science and Magic: An Introduction to Photographic Lighting" is an excellent book. I see at Amazon that there's a new edition coming out in September 2011.

I don't have the experimental spider shot from a different angle, but let's take a look at a wild spider that happens to be in a helpful position: 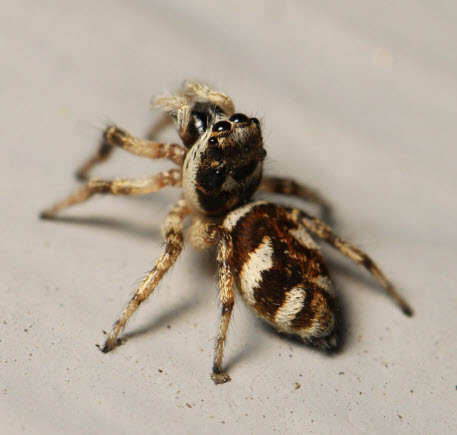 Now let's zoom in on the eyes and add some annotation: 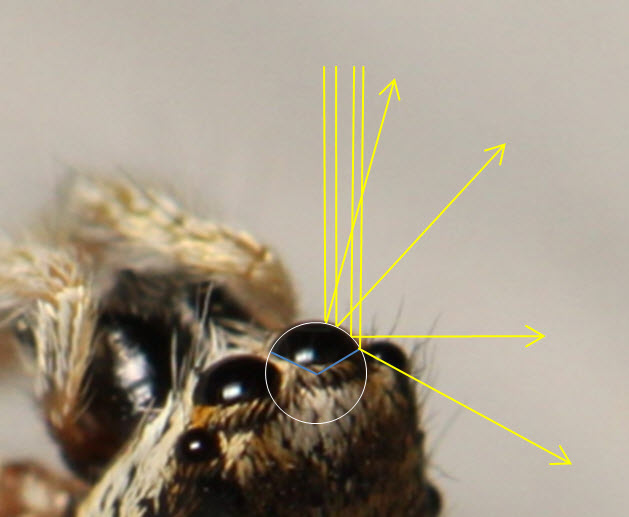 What I've done here is to add a white circle that shows the spherical profile of the eye. Then I've drawn a couple of blue radial lines to indicate the fraction of a sphere that the eye covers. Finally, I've sketched in some rays showing what part of the environment would be reflected from several points on the eye as seen from the spider's front, based simply on "angle of reflection equals angle of incidence".

As you can see, the AMEs of this particular spider cover something like 1/3 of the circumference of the full sphere. From that, the reflections cover a much wider area, more like 2/3 of the whole sphere.

So, if one asks the family-of-angles question "What parts of the environment are seen in the reflections from these eyes?", the answer turns out to be "Most of it!"

In this situation, it's pretty much a lost cause to try placing your illumination so that it doesn't reflect in the eyes.

Realistic options instead are to choose a reflection that will look attractive, kill the reflection altogether by cross-polarization, or remove it by retouching. Perhaps there are others that haven't occurred to me.

BTW, in spherical panorama photography, there's a trick commonly used to hide the tripod head -- just replace it with a reduced copy of the rest of the panorama, properly warped to imitate a shiny ball. Some variation of that technique could probably be used to generate a realistic reflection to stick into the spider's eye, if one were inclined to go that direction.

Most interesting and educational! Thanks so much for doing the work and then writing up these findings.

"For myself, the main conclusion is that for this type of subject I'll use a single flash with a fairly large diffuser, placed as close to the subject as I can without directly illuminating the front of the lens."

If I'm following your note correctly, it sounds like you rprefer a flash rig that would be similar to Lord V's coke can + large diffuser arrangement. Others use variations of this type of rig too, of course.

I keep coming back to this lighting preference myself - I generally enjoy Lord V's field macro lighting more predictably and reliably than most others, although not to the exclusion of others. It also seems effective for creating a nice asymmetric (left to right) shading and shadow effect in scenes. No doubt some or much of this preference is simply because he's such a master of macro photography and macro lighting. In other words, if I were to exactly copy his lighitng rig, my macro photos still wouldn't compete with his!

For my jumper photography preferences, an important aspect of obtaining a pleasing result is to produce a single small catchlight in each of the eyes, for the same reasons that such an artifact is preferred in many people portraits. It gives the subject a sense of life and creates a (literal) sparkle in the eyes, something that means things to most humans. Being able to see a mirror ball reflected view of the world as the jumper may see it is enjoyable, too.
----------------------------

Caveats - I also believe that other quite different flash rigs produce different but also very enjoyable results. The art of lighting is a significant part of what makes macro photography so interesting and fun, and not just a mechanical effort.
-Phil

I have a large number of live jumper diffuser examples but I don't want to post them without your permission. From straight flash with a stofen to a soft box like you have to a wrap around one.....
My FLICKR photostream
Top

yeatzee wrote:I have a large number of live jumper diffuser examples but I don't want to post them without your permission. From straight flash with a stofen to a soft box like you have to a wrap around one.....

This is with a lumiquest soft box that was given to me, so very similar to your "favorite" setup for the jumpers This is with more of a wraparound diffuser A shot and some advice by yeatzee (now 17, but still learning), on Flickr

Back when I held the flash with my left hand Phidippus audax by yeatzee (now 17, but still learning), on Flickr Jumping spider eating an aphid by yeatzee (now 17, but still learning), on Flickr

Look at whats reflected! Its own two front legs and huge sections of the pedals.... fascinating!

A plastic cup cut to size to drape over the lens Phidippus adumbratus by yeatzee (now 17, but still learning), on Flickr Phidippus Adumbratus by yeatzee (now 17, but still learning), on Flickr Phidippus adumbratus eyes by yeatzee (now 17, but still learning), on Flickr
(yes that is my fingers holding the end of the lens!)