I recently got a new cell phone. It has a nice display, so of course in an idle moment I stuck it under a microscope, expecting to see a nice simple array of glowing rectangles. Hah! There's another whole level of detail that I never heard about. 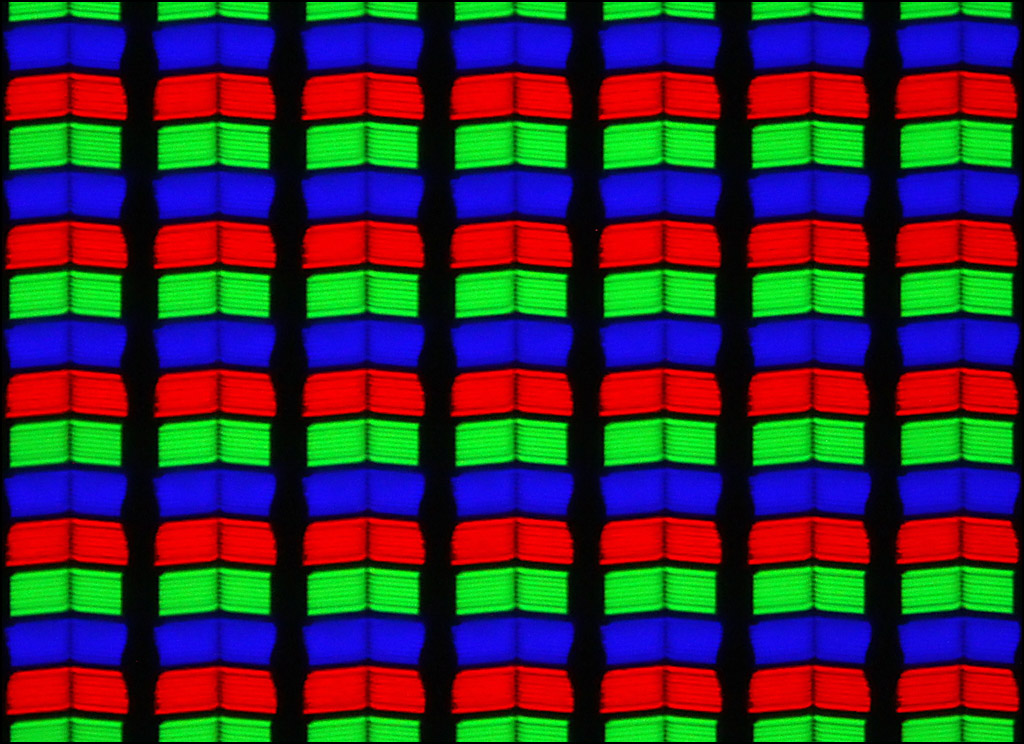 Thinking that perhaps this new technology was radically different from older phones, I hauled out the Sony Erickson that it replaced: 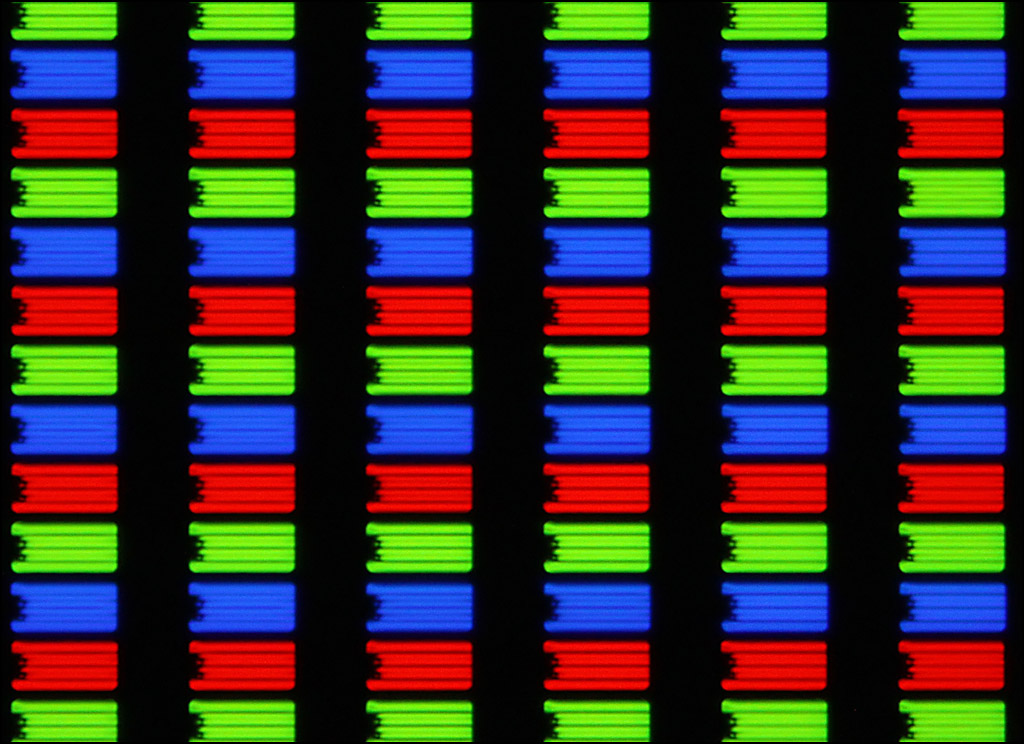 So it seems that the geometry is not so different between the two phones, although it is very much different from what I expected.

On the other hand, there is one huge difference between the two displays. I don't understand it, and I'm hoping that some other member can explain what's going on.

The difference is in the way the displays look when viewed through an added linear polarizer.

The older Sony Erickson behaves exactly like I would expect an LCD to behave. The added polarizer has little effect in one orientation, causes complete extinction at 90 degrees to that, and acts roughly as a neutral gradient filter in between.

The newer HTC Droid Incredible 2 is completely different. An added polarizer has little effect in one orientation and equally little effect at 90 degrees to that. But midway between those orientations, it produces a color shift that is strongly magenta at one midway point and green at 90 degrees to that. There is no orientation that gives complete extinction for any one of the three primary colors. The color shifts also depend on orientation --- looking obliquely through the added polarizer gives widely varying colors depending on the angle of view, where without the added polarizer the display is almost completely independent of angle.

I figure all this should be telling me profound things about how the display works, but danged if I can figure it out. All the spec sheets I've seen (for example HERE) say that the display is some sort of LCD, but further details are lacking.

Can anybody tell me what type of display this is, and point to an explanation of how it works?

The images you see here were shot using one of Edmund's Nikon Finite Conjugate Achromat 10X NA 0.25 objectives, stacked at 10 µm focus step using a StackShot, processed through Zerene Stacker with DMap. I tried also with a 20X NA 0.40, but the image quality got a lot worse -- spherical aberration from the glass I suppose. I assume that the blue pixels on the Droid are laid down in lines like the red and green, but I can't resolve them even by eye, viewing directly through a scope.

that's interesting.. I will try the same with my phone

The color shift exhibited when rotating the linear polarizer in front of the HTC Droid means the display is likely emitting elliptically polarized light.

For the benefit of anyone curious: All photons have a polarization based on the phase difference between the oscillating electric and magnetic fields that are what make up the photon and allow it to propagate. The phase between components remains fixed until the photon interacts with something. A photon in which both fields are peaking at the same time is considered linearly polarized, and this can occur at any angle around the axis of propagation. A photon in which the two fields are 90 degrees out of phase (think sine and cosine) are circularly polarized. Elliptically polarized light falls somewhere between linear and circular polarization.

. The circular component (that contributes to elliptical polarization) is highly dependent on wavelength. This is because phase changes between the EM components is typically based on a fixed distance, which results in different phase changes because of the different light wavelengths. Likewise, looking through a polarizer tilted at an angle can affect the amount of transmission (and is also wavelength dependent). Many older (but sadly not newer) displays had many layers of both linear and circular polarizers to give a steady amount of light at large angles and prevent color shifts, but these seem to have been removed now even in high-end displays so the image can be made brighter.

To answer Rik's question: Rotating the linear polarizer in front of an elliptically polarized source will attenuate the light, but not eliminate it as it would for a perfect linear source. Since the ellipticity, and thus also orientation, likely varies with wavelength, different colors will be transmitted better through the linear polarizer at different rotations.

A similar effect can be observed on most LCDs by looking at them through a reversed circular polarizer and rotating it. Sometime I'll try to figure out exactly what's going on there.

I've probably explained something poorly in all this, so as always feel free to point out where I need to clarify things.
Top

PanoGuy, thanks for the key piece of information: I had not considered elliptical polarization. Yes, that explains everything I'm seeing.

My guess now is that the designers of the LCD panel have deliberately attempted to make the output circularly polarized, perhaps to make it play nicely with sunglasses. Sunglasses are linearly polarized, and traditional LCDs whose light path also ends with a linear polarizer do not play well them. At some angles, the display goes completely dark. In contrast, a display that emits perfect circular polarization will not obviously interact with sunglasses at all.

So, the last layer in the Droid's display (except for protective glass) is probably what's intended to be a quarter-wave plate, oriented at 45 degrees to the linear polarizer just below it to form a circular polarizing combination. But as you point out, it's not going to be a perfect quarter-wave plate for all colors and all angles, so the result ends up being elliptical and produces the effects I've noted.

Further evidence that this is what I'm seeing is provided by how the appearance changes when additional materials that are probably birefringent are added in front of the display. My wife and I each have one of these phones, but we have different cases. Mine is the Otterbox Defender, which protects the display with a piece of rigid plastic that is built into the case. My wife has the Otterbox Commuter, which protects the display with a piece of flexible film that adheres directly to the face of the phone. It turns out that while my phone drifts between magenta and green as the added polarizer is rotated (with or without the Otterbox), my wife's phone with the film added drifts between yellow and blue. It would be interesting to try that with the protective film removed from hers, just to confirm that the two unadorned phones behave the same, but I think in the interest of family peace I'll let that experiment go undone.

Your explanation sounds good except for one bit of wording: "polarization based on the phase difference between the oscillating electric and magnetic fields". As I understand it, the electric and magnetic fields are always orthogonal to each other, 90 degrees apart. What determines polarization is the relative phase of one field with itself, when measured on two orthogonal axes. http://hyperphysics.phy-astr.gsu.edu/hb ... lclas.html has some good illustrations.

Thanks very much for providing the solution to my problem!

Now, I have another question that perhaps you can answer. I was surprised to see that each pixel component is broken into a set of fine stripes. Why is that?

Thanks for linking to that website Rik, it's better at explaining that any other sites I've found so far.

Yes, the E and M fields are always 90 degrees apart around the axis of propagation. What I meant is that the E and M fields may have a temporal phase difference. If you are interested in measuring the exact polarization it should require a minimum of three measurements: 2 for the linear component and 1 more for the circular component.


...my phone drifts between magenta and green as the added polarizer is rotated (with or without the Otterbox), my wife's phone with the film added drifts between yellow and blue.

Interesting, I have not really looked at this before. I am wondering how circular the light is coming from your display. Does the amplitude of light vary a lot as you rotate the linear polarizer in front of it, or is it mostly just a color shift?


Now, I have another question that perhaps you can answer. I was surprised to see that each pixel component is broken into a set of fine stripes. Why is that?

Not sure about that. The lines do appear to have different orientations in different display types. Perhaps they are conduits to apply voltage to the liquid crystals?
Top

Does the amplitude of light vary a lot as you rotate the linear polarizer in front of it, or is it mostly just a color shift?

When the display is producing "white", my overall perception is that it's mostly a color shift. Under a scope so that I can see individual elements, it seems that Red and Blue change together and are offset by about 90 degrees of rotation from Green. As the polarizer rotates, Red and Blue darken to the point that I can't see them between the Greens, while Green darkens a lot but never becomes invisible even when Red and Blue are at their brightest. The roughly orthogonal orientations of RB and G explain why there are two intermediate "neutral" positions, with green- and magenta-shifts between them.


Perhaps they are conduits to apply voltage to the liquid crystals?

I was wondering about that, but everything I read says that the voltages are applied via transparent electrodes such as ITO (indium tin oxide). Since there aren't any significant currents involved, I don't understand why conduits like this would be required.

The lines might also be spacers between the outer glass layers that keep the liquid crystals contained, though I don't know why they would be angled in different orientations.
Top
Post Reply Previous topicNext topic
7 posts • Page 1 of 1