A boatload of ? (surface texture on spiracle of cutworm)

A boatload of ? (surface texture on spiracle of cutworm)

I was surprised by the appearance of this subject. Any guesses? 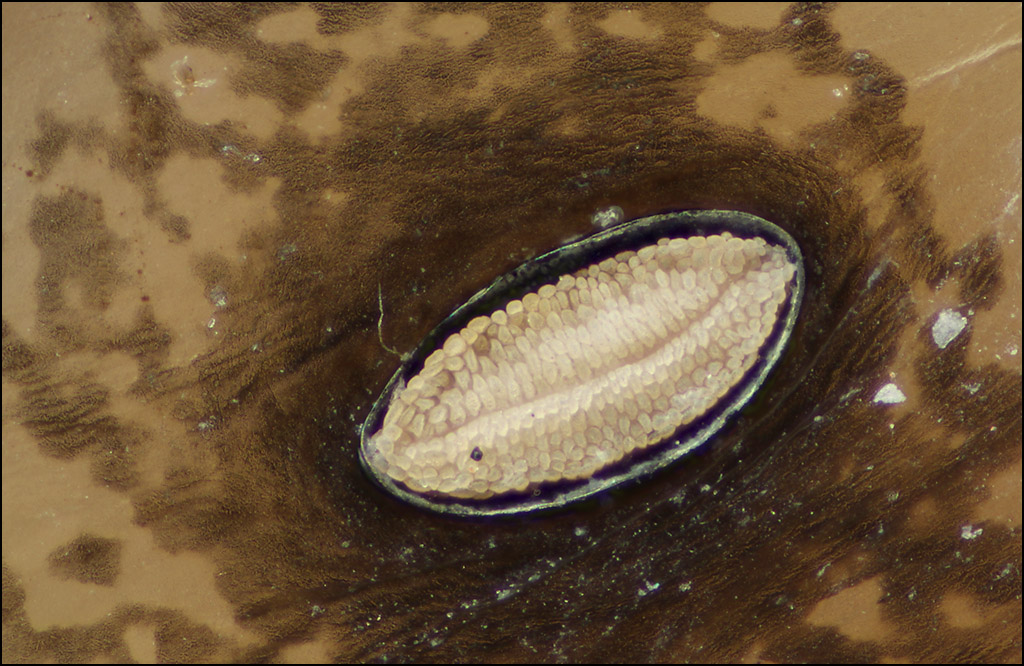 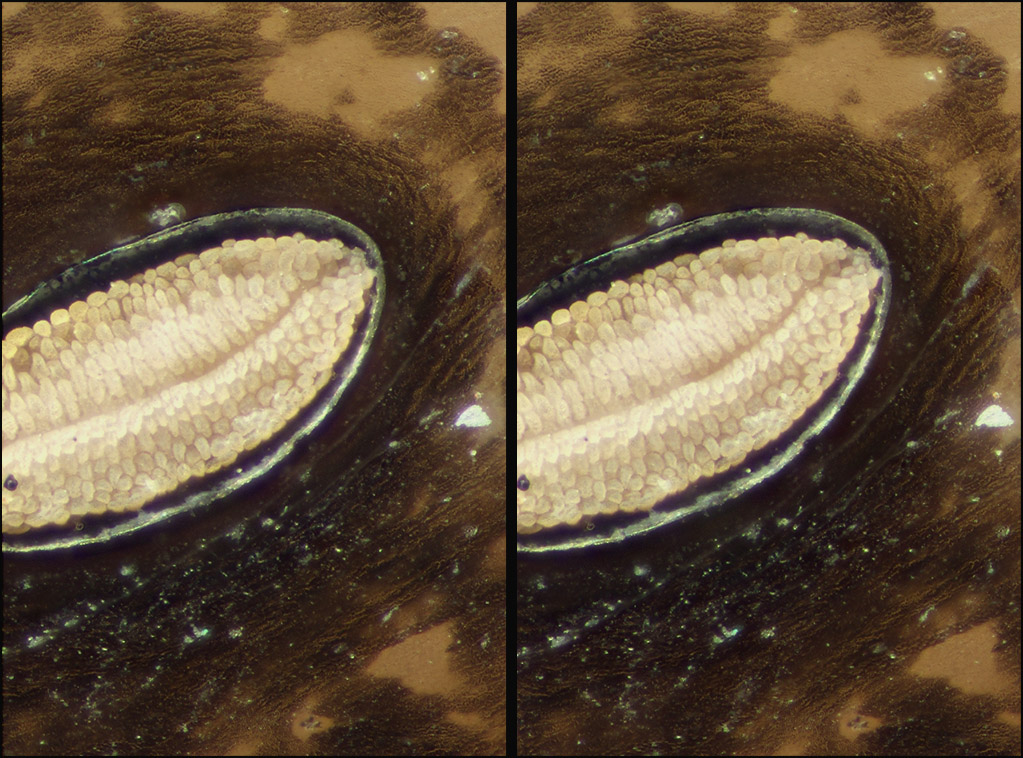 I have no idea Rik.
John

A picture is worth a thousand words, but it uses up a thousand times the memory.
Top

It looks a lot like pollen in a stamen but as that's what you'd expect that to look like I guess it's something different. Is it a large spiracle?
Flickr | www.laurieknight.net | Blog
Top

Like Laurie, it reminds me of an anther with pollen grains inside. Sticky pollen can look like this. But then, that "boat" is so tiny ...

Hmm, well, at least it's spring and Rik could be following an old habit and ripping the flowers apart again.

Maybe from and orchid, they can be tiny ...

I don't know but the concavity in which it resides might be significant.

harold
My images are a medium for sharing some of my experiences: they are not me.
Top

Yeah, it's quite puzzling. Even a closer crop doesn't seem to help my understanding. I really don't know what the details of this subject are... 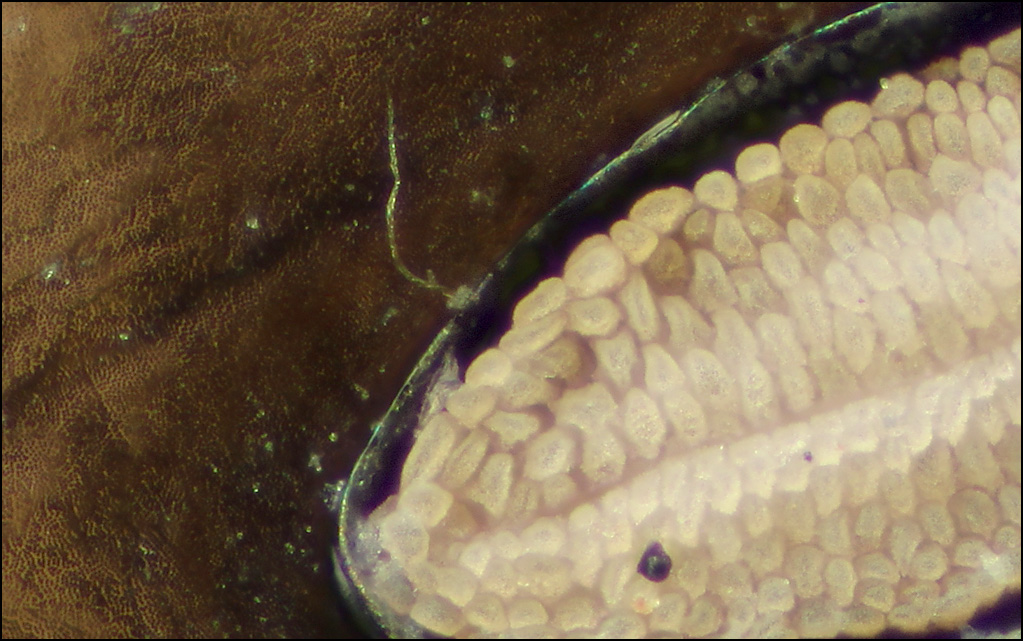 Here is an even closer view, shot this time with Nikon CF Plan 50X 0.55 inf/- EPI ELWD on an ancient Vivitar 200mm f/3.5 tube lens. This may have been sharpened beyond the point of realism, but the enhanced surface texture helps to lock up the 3D impression. Focus-stacked at 2 µm step size using StackShot and Zerene Stacker in a horizontal platform setup similar to HERE. 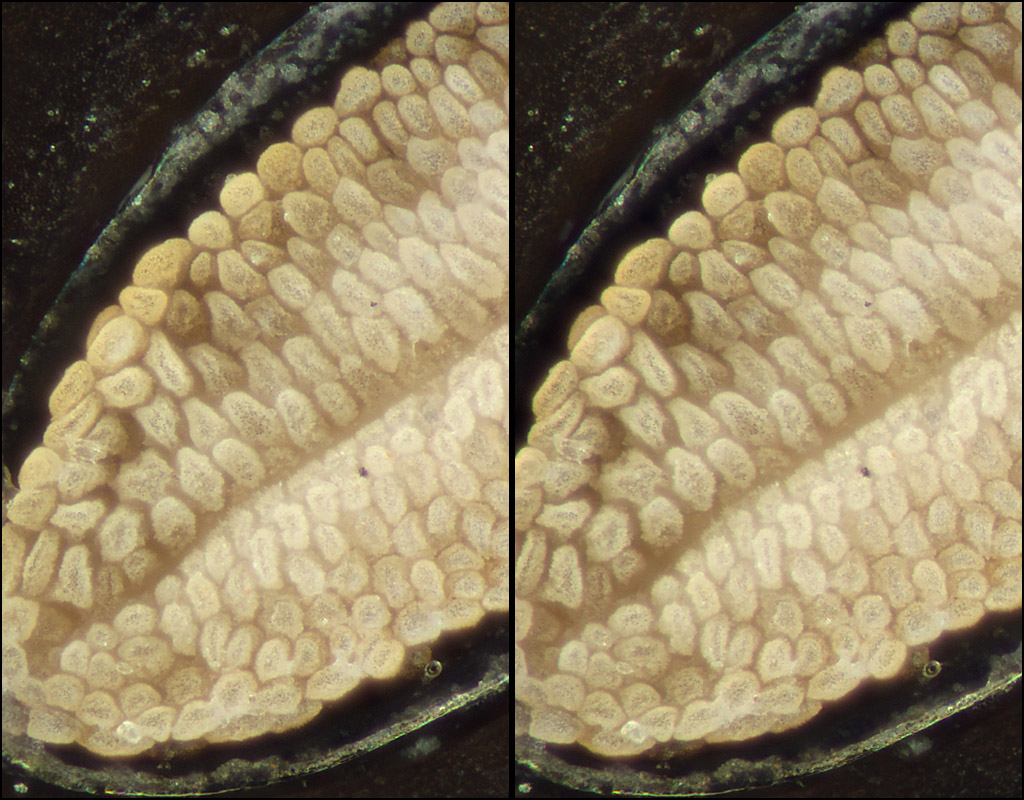 Oh dear me -- I've gotten distracted and forgotten my manners!

Just so -- at least for some definition of "large". The spiracle itself measures 0.44 mm in length.

The subject is a cutworm caterpillar, overall length 25 mm. I caught it eating the swelling buds on my grapevine several weeks ago, after noticing that the vine was gradually becoming denuded. I slipped the caterpillar under the microscope, was surprised by the appearance of the spiracles, and stashed it live in the refrigerator until I had some free time to photograph it. I intended to photograph it live, keeping it quiet by chilling, but that didn't work out very well and I ended up accidentally killing the beast by freezing it. The state as photographed in the initial posting here was freshly killed, rinsed in water and then in 99% isopropyl alcohol and briefly air-dried to remove surface moisture. For the 50X version, it has had some chance to dry out a little more.

I really do not know what the white lumps are. I presume that they are surface texture on the two main lips of the spiracle, but it's a mystery to me why they are so different from the surrounding cuticle. Time to study the literature, perhaps. These images have prompted me to read the discussion of spiracles and other respiratory apparatus in "The Insects / Structure and function" by R.F.Chapman. Fascinating stuff!

compare with
THIS IMAGE
NU.
student of entomology
Quote – Holmes on ‘Entomology’
” I suppose you are an entomologist ? “
” Not quite so ambitious as that, sir. I should like to put my eyes on the individual entitled to that name.
No man can be truly called an entomologist,
sir; the subject is too vast for any single human intelligence to grasp.”
Oliver Wendell Holmes, Sr
The Poet at the Breakfast Table.