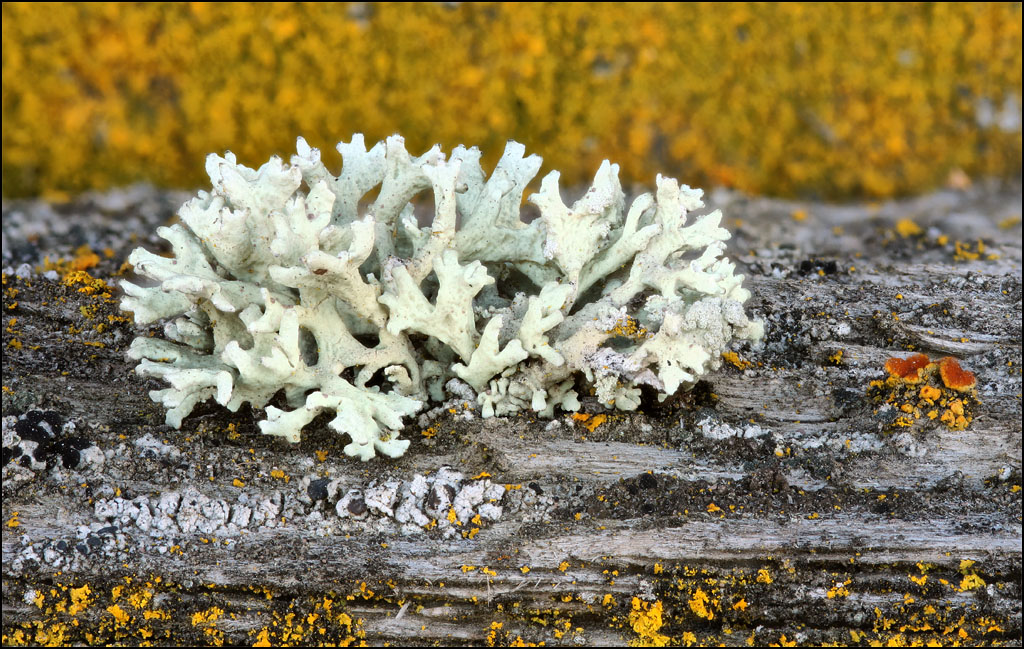 Here is the physical setup: 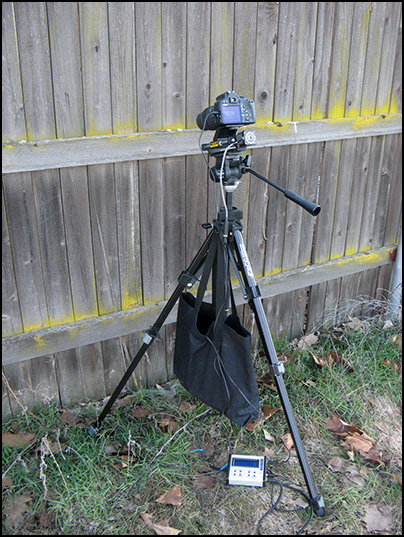 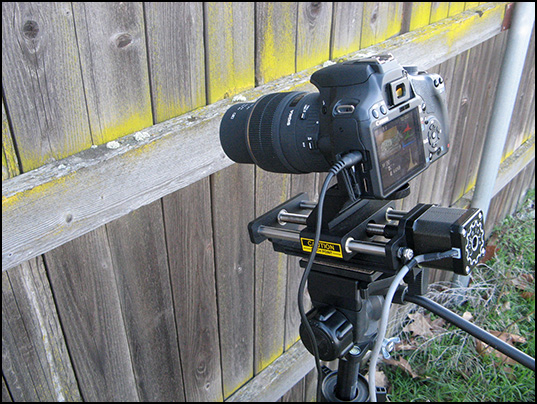 I tried shooting the little orange lichen at the right at 3X and 0.040 mm focus step, but it turned out that the fence was swaying back and forth too much for that. The stack ended up looking like it had been shot substantially in random order, and I had to throw out too many frames due to motion blur.

You might have been better off taking them as I would have done, resting the end of the lens on the same fence rail - at least that minimises relative movement

I went back and took another run at the small lichen. This time I went equipped with flash and a better understanding of what was likely to go wrong. Worked out very nicely! 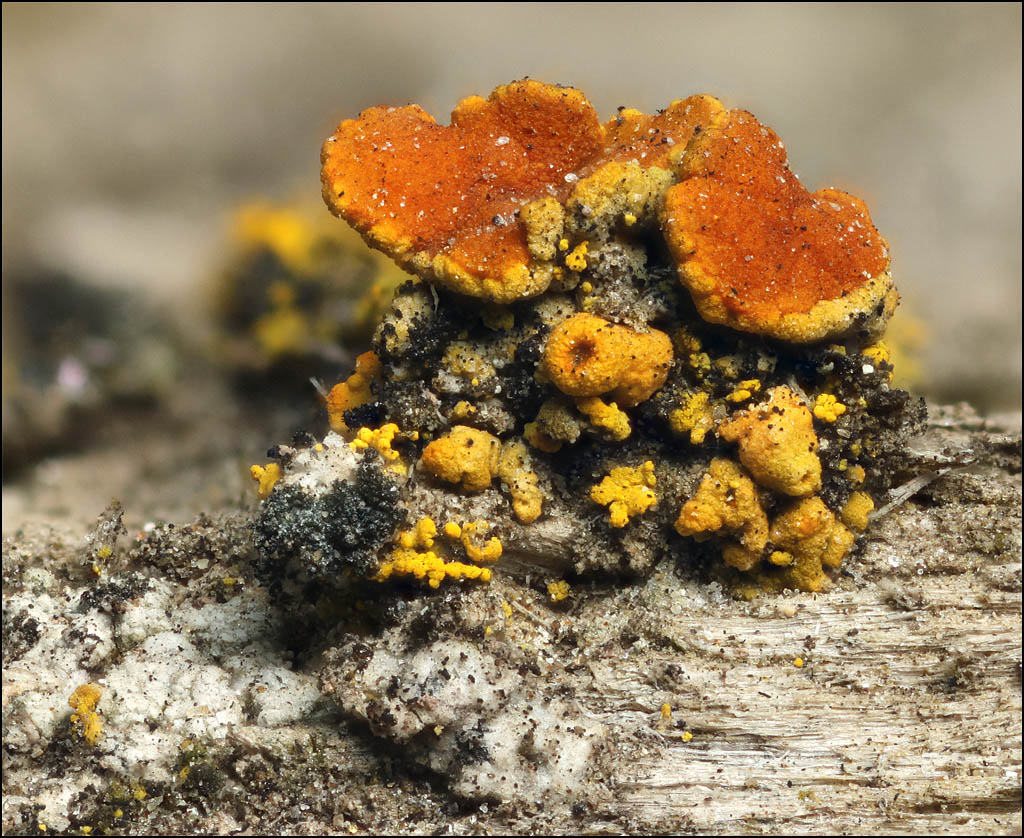 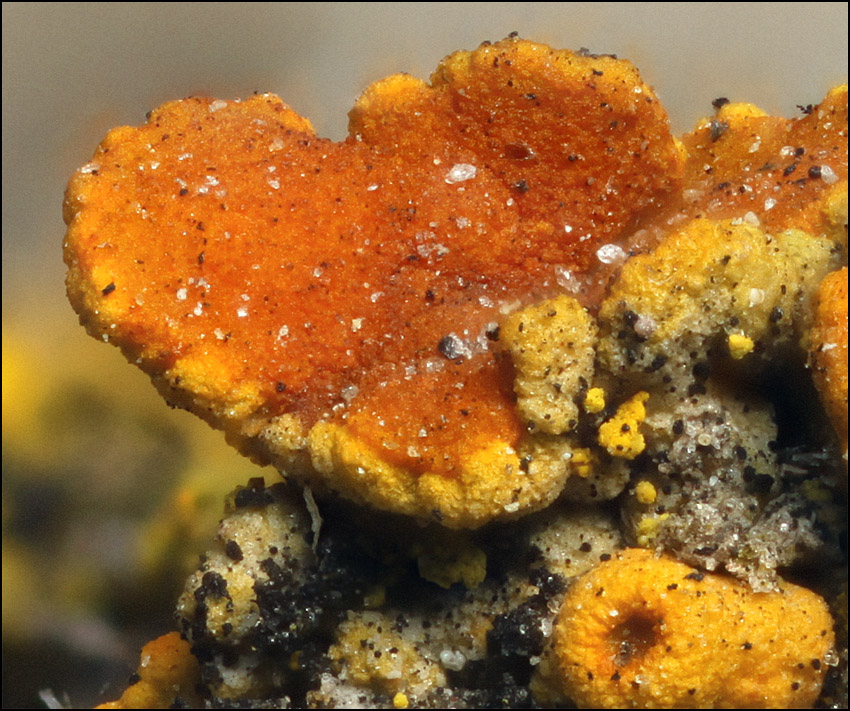 And just to fill in about the setup: 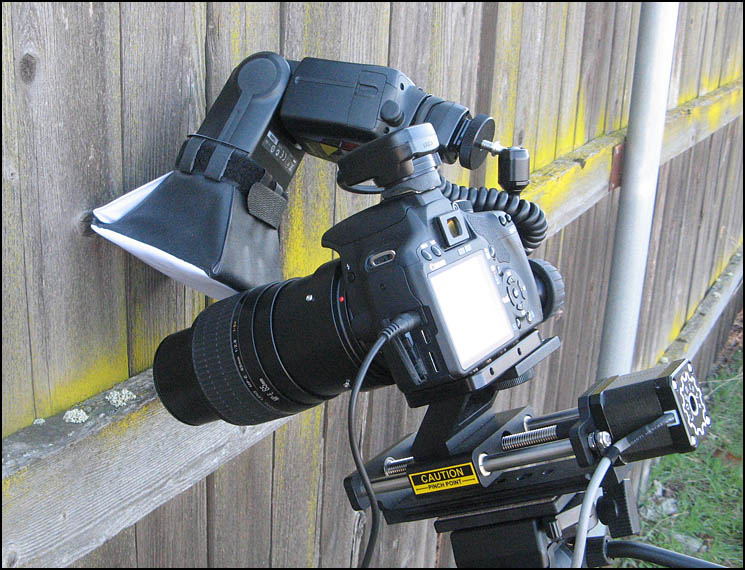 The lichen shown above is the little orange thing at image center here: 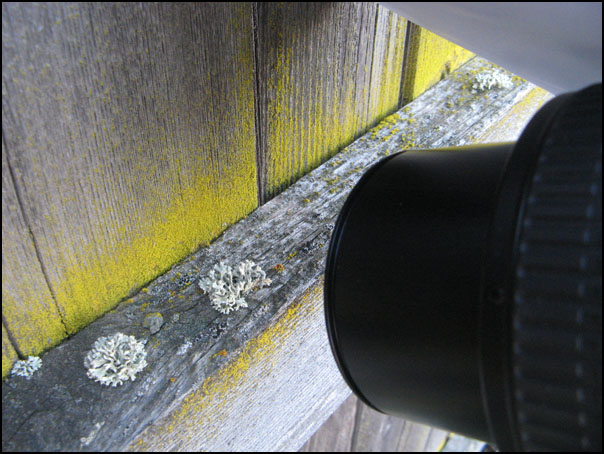 
LordV wrote:You might have been better off taking them as I would have done, resting the end of the lens on the same fence rail - at least that minimises relative movement

Yep, I thought about that, and if I had wanted a short stack, probably that's what I would have done.

But I really wanted a deep high resolution stack, and I couldn't figure out a good quick way of stabilizing the rail or tripod against the fence. Lag bolts came to mind, but I don't own the fence and this is kind of a public area.

However, it turns out that the bulk of my problem was due to traffic. The fence runs perpendicular to a major street that's located about 50 feet behind me as I stood photographing the tripod. Every time a car goes by, the fence drifts from its neutral upright position to lean toward the car as it approaches, then back past neutral the other way to lean toward the car as it goes away, then finally back to neutral again as the car disappears into the distance. Next car, the same thing happens. It's not so bad when there's just one car, but the first time I tried this, I happened to pick the start of rush hour! Today I got luckier and happened to pick a quiet time, when the movements were both less extreme and obviously related to vehicles. I'm always surprised by what all can go wrong!

For curiosity, I shot a series of "fixed" pictures maybe 1/2 second apart as a few cars went by, then ran them through Zerene Stacker as if they were a stack. Here is what ZS had to say about image alignment: 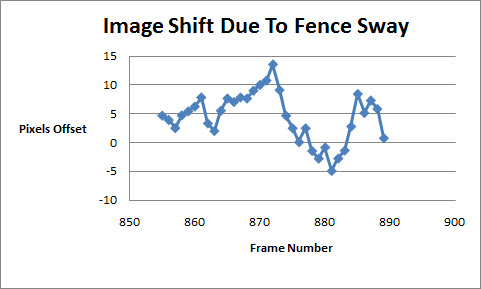 You are going to end building a canon-zerene based seismometer to detect microseismic movements!

The white lichen is possible a Physcia and the orange one may be a Xanthoria. In both cases the resemblance may be superficial.

which I will add to the FAQ topic.

Pau, you just reminded me of an experience from many years ago, when as a project in high school shop class I built a small seismograph. It was fun to watch, but nowhere near as sensitive as this new "accidental invention".

Harold, thanks for the links & for extending the FAQ.

Craig, I was torn about putting too much setup stuff here in the image gallery. Eventually I decided to keep all the info together here instead of splitting it between image gallery and technical discussion forum. Part being friendly to the reader and part laziness, I am afraid!

Rik, if it helps you feel better the setup photos also give an impression of the habitat and sizing of the main subjects, so can be justified on non-technical grounds

I finally got around to rendering out a stereo version of the small lichen. 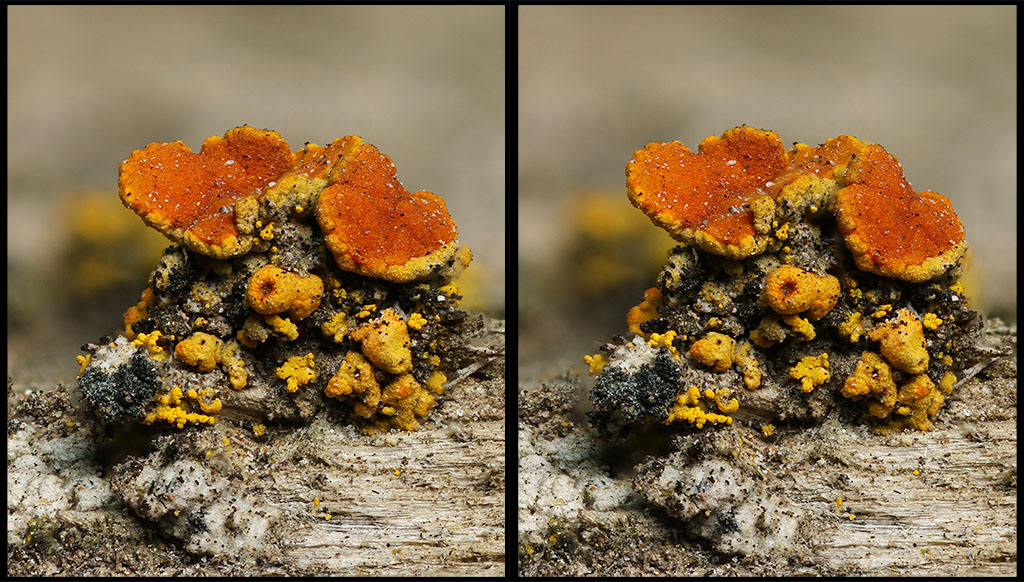 Zerene Stacker synthetic stereo, DMap, +-3%, with a bit of retouching from Stack Selected and cloning in Photoshop to clean up the background.

Lichens are one of the few subjects that, if you want to, can be revisited a year later to find the structure has little or no change in sizeor shape. Clearly, Zerene allows a stereo pair to be created from a single stack without that revisit.

A surprisingly pretty little thing. Even I should be able to find some of those. It's spring so I ventured to the shrubbery, but after an hour on hands and knees I'd found nothing to trouble the shutter.

Rik I noticed the thread started with a Sigma 105 macro, and know you have a Canon 100L now. Do you see much of a difference between them?
Top

Thanks for the comments, guys. I'm taking this image to a meeting of nature photographers next weekend. I suspect this will be way outside most of the stuff they're used to.


ChrisR wrote: I noticed the thread started with a Sigma 105 macro, and know you have a Canon 100L now. Do you see much of a difference between them?

The Canon 100 L is much sharper and is more convenient to use because of its internal focusing. This particular Sigma 105 was purchased in 2004 and is the older non-DG design. I have no experience with the newer DG Sigmas.

Rik wrote:I finally got around to rendering out a stereo version of the small lichen.

I finally got around to purchasing a stereoscopic viewer...what an amazing difference.

Craig Gerard wrote:I finally got around to purchasing a stereoscopic viewer...what an amazing difference.

Excellent -- I can always tell when stereo locks up for a new person by when they say "Oh!"

Which viewer did you end up getting?