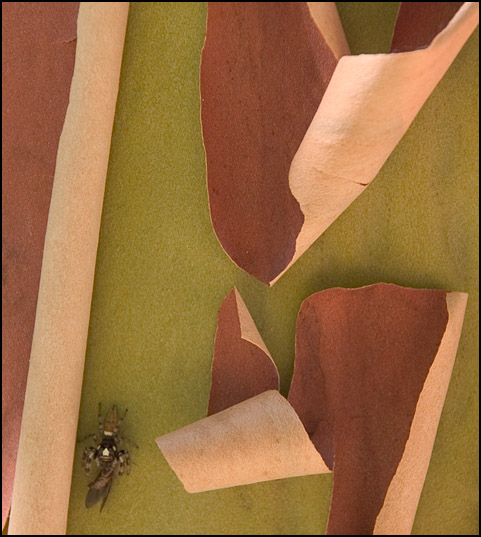 The Pacific madrone, Arbutus menziesii, is a tree native to the northwest coast region. It's fairly unusual in a number of ways. For starters, its closest relatives are heather and a bunch of other low-growing plants. You'd probably never guess, except for the flowers, which are tiny and urn-shaped just like the rest of the Ericaceae family. It's also the only broad-leafed evergreen tree native to the northwest.

But what makes the madrone really distinctive to the eye is its bark. It peels. A lot. "Exfoliating" is the official term. The stuff just curls up and pops off as a matter of course. It's perfectly normal and healthy for these trees. 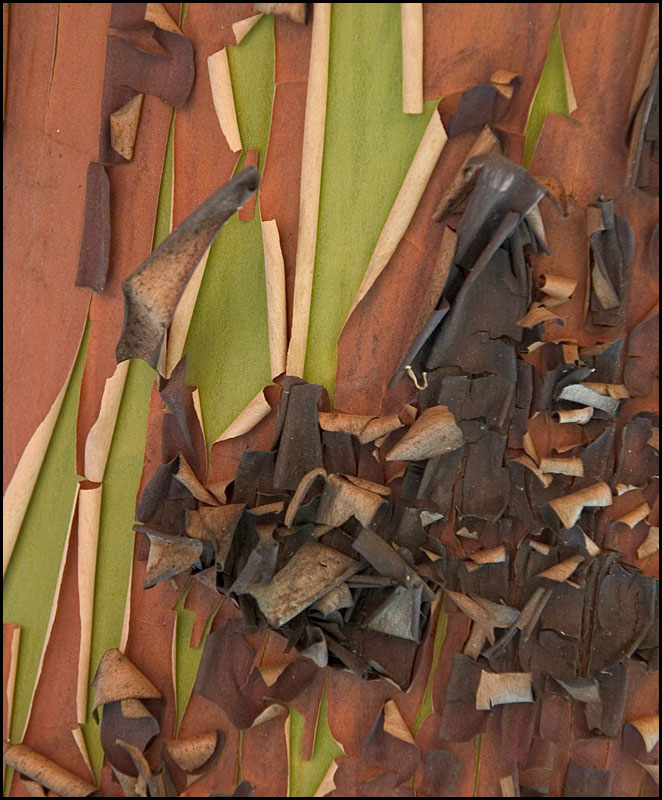 Despite the wide range of these trees along the Pacific Coast, they're actually pretty persnickety about the conditions under which they'll grow. On a quick scan of the web, I found one article talking about how hard they are to transplant -- to the extent that good greenhouses will mark their seedlings as to which side goes north!

Ken, you'll be happy to hear that this same article says

One theory to explain why madrones are so difficult to transplant is that they rely heavily on a complex relationship with fungal filaments in the soil. These fungal filaments grow together with plant roots to form extensive networks called myccorhizae. These bring additional water and nutrients to the plant. Myccorhizae can increase the working surface area of the roots by as much as a thousand-fold.

Another article speaks of the madrone being in serious decline, with the reasons being unclear, but noting that "over 83 fungi and 15 chewing insects are involved" and "the relationship between living and non-living factors would appear to be more finely balance with the Madrone than with almost all other plants on the [San Juan] islands".

These pictures are from southern Oregon, near the little town of Gold Hill on the Rogue River.

Interesting writeup Rik. Looks like trees shed their "skin" too. I noticed you have a spider with prey in the first image, looks like a jumping spider.
Sue Alden
Top

Seems as though we are having troubles with our new server. I responded to this post once and clicked submit and got Page Not Found?

Now that my train of thought has been broken

Some interesting and unusaul photographs Rik. There are many plants which rely on fungal filaments for nutritional support and I suppose the Madrone is no exception. I guess it also goes to show that too much of a good thing, can be bad for you; since fungi along with insects are suspected to be the cause of decline in the species in these trees.

It also sounds as though there maybe some considerable grant money hidden in here somewhere for university students. I read some time ago, that there were a handful of students from a university somewhere here in the US, that recieved (get this now) $5,000,000.00 to research the habits of ants in New Mexico. Education is a good thing...yes?

A very nice set of images Rik, along with a very informative and interesting write up, as Sue mentioned. I find myself recalling tid bits of information that I have amassed from posts like this during casual conversation with others. It is amazing how much we learn from each others posts and not really realizing it at the time. Thanks Rik.

Very very interesting info Rik. I gather there are a ton of symbiotic relationships we still know nothing about!!. Still a lot of things to be discovered about our planet. I probably would not have known about this tree if it wasn`t for you and your picture.