40X with a StackShot rail

40X with a StackShot rail

Here is the gear used to photograph Proboscis of Noctua pronuba, very close up. 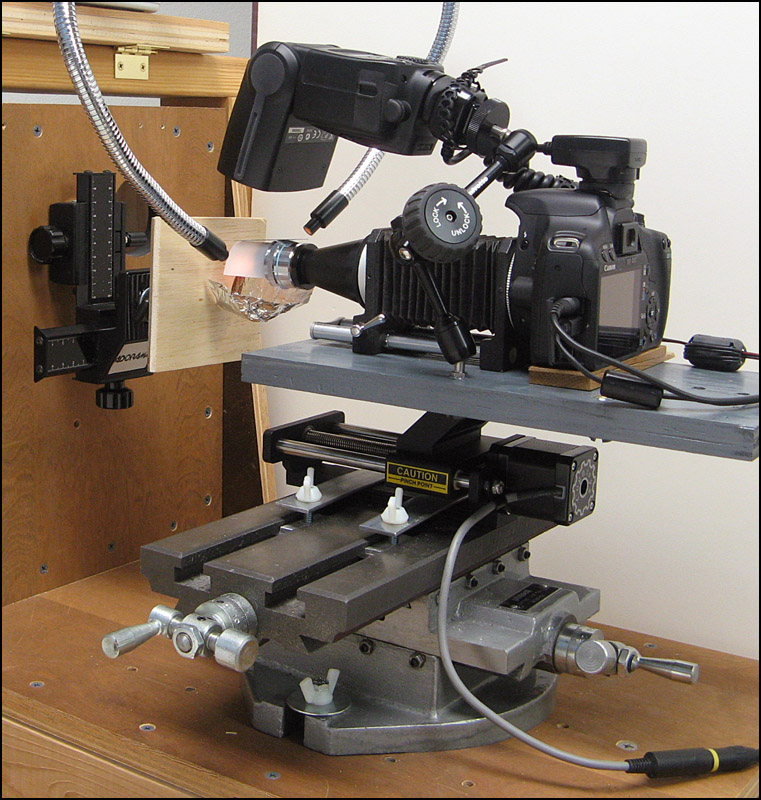 This setup consists of the following: More information about the StackShot / Zerene Stacker interface can be found in the thread HERE.

Do you recall the flash duration?

What did you have T-settle set to on the StackShot for this setup?

Also, what is the clip-lock strap at the base of the flash unit?

> Do you recall the flash duration?

I believe flash power was set to manual 1/16 in this case. The gobo ate quite a lot of light, and I probably had the flash set to wide angle to be sure I didn't have to worry about unevenness over the diffuser. Duration probably scales with power, so something under 1/10,000 second?

> What did you have T-settle set to on the StackShot for this setup?

I was using 3 seconds of settling time, provided as a parameter in the Zerene Stacker controller.

> Also, what is the clip-lock strap at the base of the flash unit?

That's just a cable tie (QuickStrip Mille-Tie, purchased at Radio Shack). The cable comes into the front of the socket on the flash cord, so unless it's tied up it falls down onto the bellows. Doesn't look good and is hard on the bellows paper. Considering that paper is over 40 years old, I figure it deserves some coddling.

Nice set up. What distance per step are you using for 40x stacking? Where did you get your x,y table?

Do you have some special version of Stackshot with smaller minimum step length?

The standard version of Stackshot, as far as I knows, can only do as fine as 10µm steps (accomplished by 1/16 microsteps).

My calculation for the combination of your NA 0.5 40x objective and camera, indicate a maximum step length of less than 2µm.

Ulf W wrote: Do you have some special version of Stackshot with smaller minimum step length?

The standard version of Stackshot, as far as I knows, can only do as fine as 10µm steps (accomplished by 1/16 microsteps).

That is correct; see here for the special (pre-production) version.
Top

Ulf W wrote: Do you have some special version of Stackshot with smaller minimum step length?

The standard version of Stackshot, as far as I knows, can only do as fine as 10 µm steps (accomplished by 1/16 microsteps).

That is correct; see here for the special (pre-production) version.

The link is correct but the numbers are not, or at least they don't go together like that.

In the rail itself, both old and new, 1 microstep is actually 0.000496 mm = 0.496 µm. This is documented in the StackShot manual, section 3.3.11 "Units of Measure", except that the manual says "step" rather than "microstep". Physically this number comes from using a screw at 16 rotations per inch, a stepper motor at 200 full steps per rotation, and 16 microsteps per full step.

If you set units to mm, then the standard controller has a minimum focus interval of 10 µm. If you set units to "steps" (actually microsteps), then it is possible to set an interval of one microstep = 0.496 µm. However, if you do that you'll discover that the resulting physical movements are not uniform, with physical steps occasionally being up to about 10X larger than the average step.

The recent modifications do not involve changes to the rail itself. Rather they are modifications to the controller that allow it to make the rail move with much more uniform microsteps. The movements are still not perfectly uniform, but they are now good enough to limit the maximum physical step to something like 0.0013 mm = 1.3 µm, at least in the unit that I have. In the Noctua pronuba stack, I used 2 microsteps per focus interval, which (based on measurements made separately) resulted in actual focus intervals varying from roughly 0.6 to 1.9 µm.

Regarding the nature of the improvements, I'm treating that information as proprietary to Cognisys so I won't be explaining in any more detail.

richard martel wrote:Nice set up. What distance per step are you using for 40x stacking? Where did you get your x,y table?

The step size question is covered in my posting one up from here.

The XY table is from Enco, model #201-2826. I see they're having a sale today, web price $89.95 each. But it seems like those tables are on sale quite often. I can't recall ever thinking that I'd have to pay over $100 (plus shipping). The manufacturing quality is not the greatest, but properly adjusted, lubed, and carefully turning the dials, I've been running mine down to 10 microns and below for years.

Here is their review on the Canon 580 EX II. They give the flash durations as follows:

t0.1 Flash Duration Times: The last test results table displays flash durations for all partial output levels, as far down as the Broncolor FCC which is being used can go; the measurement limit is 1/8000 seconds, shorter flash durations can’t be taken unfortunately.

Canon itself only specifies the full-power flash duration as “1.2 ms”, which translates into 1/833 seconds. As you can see there’s quite a discrepancy between the official and the metered value which leads to the conclusion that Canon uses the t0.5 specification (which is also used by Nikon, by the way).
Top

Thanks for the published info about the 580 EX II. That's a great review article.

As an interesting aside, there's more going on with the 580's behavior at full power than might be implied by the one number of "flash duration".

I recently had occasion to look at the timing aspects of flash in a setup that happened to be using a 580 EX II. I was watching light output with an analog sensor connected to an oscilloscope, so I could see the details of light output versus time, instead of just a summary number.

What I saw was that the scope traces got pretty weird at full power. Not only was the overall flash length much longer than I expected from lower powers, but the peak brightness was lower also. I expected that at full power the flash just wouldn't bother to quench early, but what the scope showed was that the whole discharge curve was modified. It reminded me of some low-and-slow trick like might be used to extract maximum energy from a battery if you're willing to take a lot longer.

I seldom use the flash anywhere near full power, so the observation didn't matter much. But I found it interesting and thought I'd mention it here in connection with the duration numbers.

Rik, even though I'm moving away from flash, I haven't yet broken entirely from it, so your information is quite interesting to me. What a shame that flash--whether speedlight, monolight, or pack and heads--tends to be presented to us as a black box. We shouldn't have to use oscilloscopes to find out what our equipment is doing.

Unlike your workflow, mine often involves running flashes at full power. As I write this, I have a 1348-frame stack going with a single Nikon speedlight at half power. This amount of power is necessary because I have a polarizer behind the lens, and am bouncing the light off a reflector. If circumstances were slightly altered, I could easily need to run the flash at full power. Sadly, there is not room, in this situation, to use an A/C monolight, and at present, my fiber optic guides are not configured for use with either monolight nor halogen bulbs. So reflected Speedlight it is.

Thanks for a your interesting and useful observations--they are much appreciated.

One thing about flashes is that their output is not consistent. If you were to do a test you would see that the image brightness is fluctuating a bit. That is not be a problem for your typical shooting styles. But it can be if you are stacking numerous images and the exposure changes ever so slightly. I think it is because of this that manufacturers are not giving us a too many specs. They would be off in some cases and people would complain.

I have seen articles of people modifying older flash units to give them more consistent light output by upgrading or adding components to their circuits.
Top

In my experience, Nikon Speedlights become consistent if one pauses, between shots, substantially longer than it takes for the ready light to come on. If I observe inconsistency, I am not waiting long enough. Also, I need to make sure my batteries are not close to being dead. My A/C powered Alien Bees monolight has been consistent between flashes without an special precautions.

It would be interesting to read the articles you mention.

Hey Chris. The information was gathered from a Canon camera forum that I hang out it. (I come here more often now.

). I think there were a few threads started by various members that are heavy into their flash kits. I do not have any specific link back to the site however.
Top

Through the usual random walk web surfing process, I came across this thread on flash duration, etc.

Below are some links on the subject of flash pulse shape and duration that I've found to be useful in recent years, hopefully supplementing the info and links already provided. The shape of flash pulses is strange enough to make me somewhat skeptical about assigning a single number for a flash pulse's width, especially if comparing different units or even the same unit at different nominal power levels. The old standby of Full-Width-at-Half-Maximum seems a bit simple for this task. It would be OK if the curves were approximately a family of Gaussian curves or something equally simple...

--------------
I wonder if the Canon 320 flash unit, through its novel video light feature, would be useful for providing a focusing light for high-mag macro work?
-Phil