This is Noctua pronuba, the Large Yellow Underwing moth. 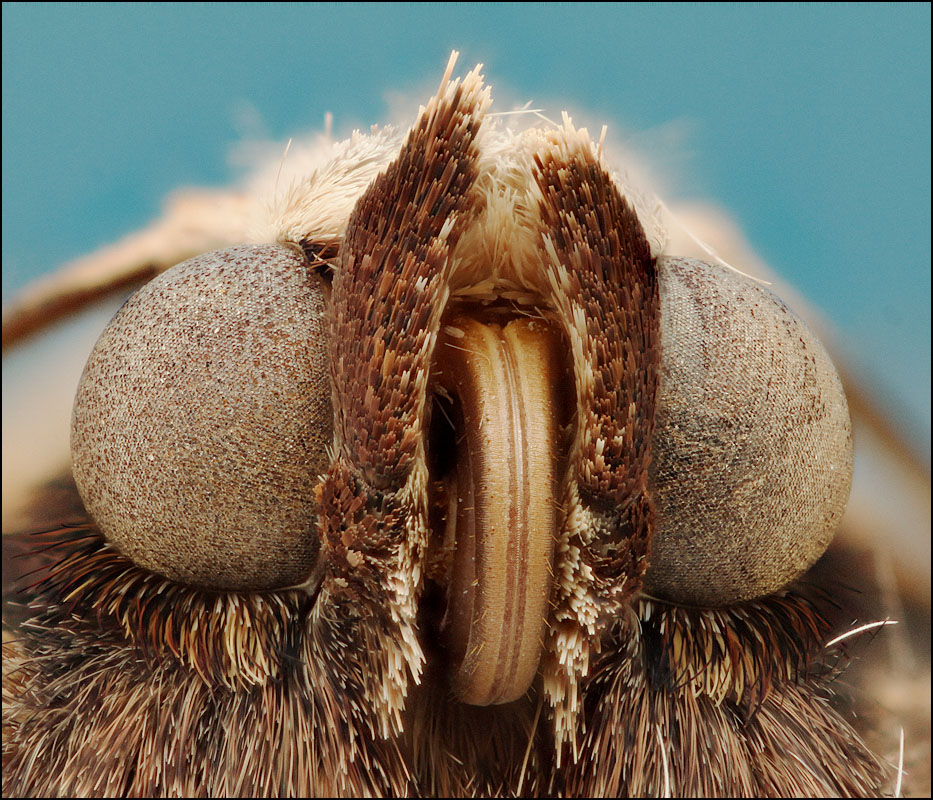 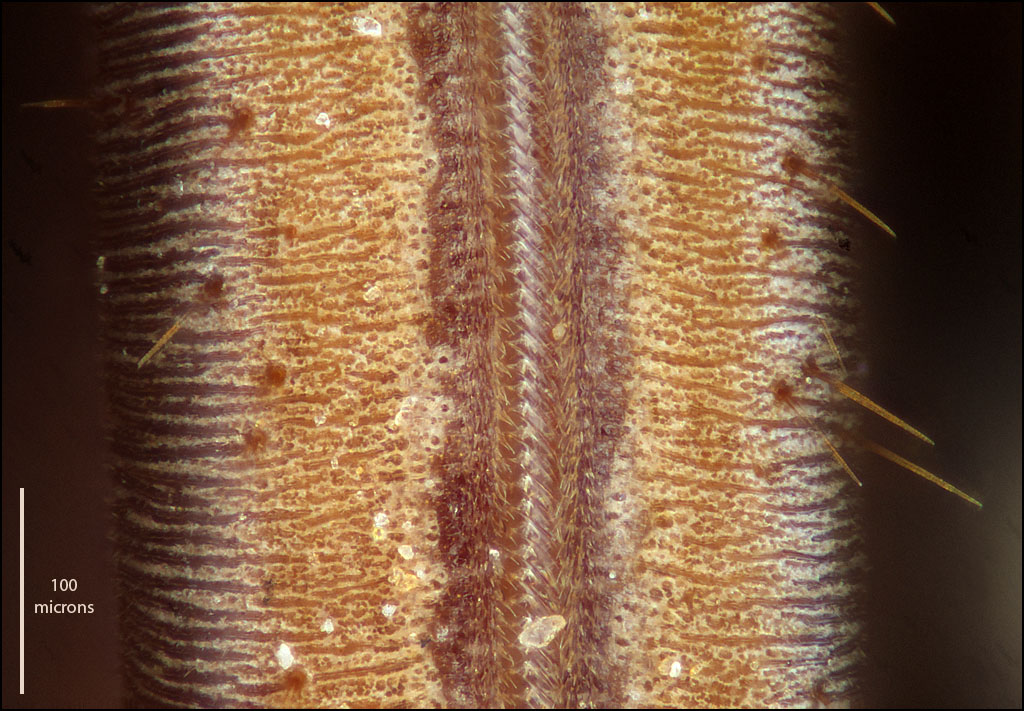 Closer yet. The image below is a severe crop of the image above, about 0.1 mm wide. Stereo pair, crossed eye. This image shows the joint between the left and right halves of the proboscis. The halves are separate during pupal development and are "zipped" together by the moth shortly after emergence from the pupa. I'm interested in the zipper mechanism, but unfortunately it's not yet clear in this picture. Maybe next time! 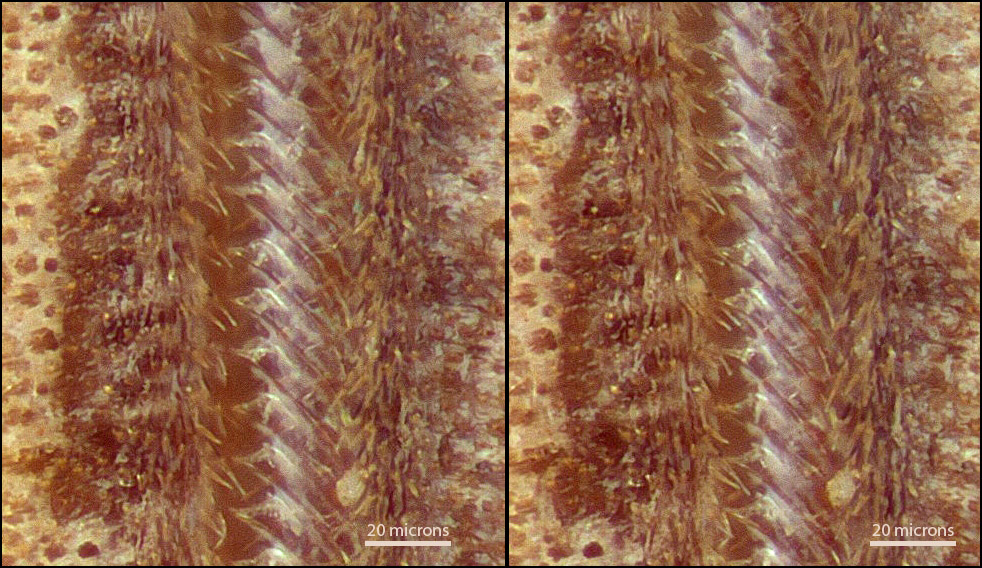 Popping back out, here is a stereo pair of the larger area.

Both stacks shot with Canon T1i camera and StackShot rail via Zerene Stacker.

Rik wrote:The halves are separate during pupal development and are "zipped" together by the moth shortly after emergence from the pupa.

This is one of the many things I did not know. I went looking for SEM images to have a closer look at the 'zipper' but could not find anything.

Very interesting!
I think this example demonstrates how essential the stereo view is to correctly perceive the real structure here. In the single image I would only see vertical stripes that could well lie in one plane. It's only in the stereo pair that I am able to see that there actually is a deep vertical furrow.

"...stackshot rails via zerene stacker."
Do you mean you controlled the rails via Zerene Stacker?
Top

Re: Proboscis of Noctua pronuba, very close up

rjlittlefield wrote: . I'm interested in the zipper mechanism, but unfortunately it's not yet clear in this picture. Maybe next time!
--Rik

SEE HERE ALSO
NU.
student of entomology
Quote – Holmes on ‘Entomology’
” I suppose you are an entomologist ? “
” Not quite so ambitious as that, sir. I should like to put my eyes on the individual entitled to that name.
No man can be truly called an entomologist,
sir; the subject is too vast for any single human intelligence to grasp.”
Oliver Wendell Holmes, Sr
The Poet at the Breakfast Table.

NikonUser, thanks for the pointers. I had no idea what search terms to use.

Barry, that's correct. See other thread HERE. The mechanical framework for this 40X stack was more stable than what's shown in that other thread, but it was the same software and focus stepper.

Adding a link: the setup for shooting these stacks is shown HERE.
Top

Interesting shots- explains a shot I took earlier in the year of a moth.
Presumably the proboscis has partially unzipped.
Brian v. Remarkable series of photos! Your work with the MPE seems to be going very well.

In the stereo image (image #3), crossing my eyes and locking into the resulting 3-D image worked very well except for the white structure that runs from bottom to top in the center of the images. Within this white structure, I see small white "scales" that are floating just above the surface, and they almost give me a headache, appearing not to really belong to the 3-D image. Not a big deal or anything - just an almost imperceptible aspect when I view the image. Perhaps these very small floating "scales" should be seen this way in 3D? I wish I could make a screen capture of what I'm seeing so it would be clearer. Just a comment with the hope that it might be a stimulus to better understanding of 3-D photography through stereo imaging.

I don't see this effect at all when looking at image #4 in stereo. Both images are delightful to see in 3-D, providing much better understanding of the anatomy and structures of the critter.

DQE wrote: Within this white structure, I see small white "scales" that are floating just above the surface, and they almost give me a headache, appearing not to really belong to the 3-D image. Not a big deal or anything - just an almost imperceptible aspect when I view the image. Perhaps these very small floating "scales" should be seen this way in 3D?

I see those light "scales" too, and I don't know what they are. I'm thinking they're artifacts of the synthetic stereo computation, but they could be real structures that are mostly transparent and don't resolve well. I just can't tell. Maybe next time!

Here is a different view of the same structure. This is from a different specimen on which the two halves of the proboscis had come partially "unzipped" as I attempted to uncurl it. The area of separation seemed like a place that might give some good insight, so I shot it.

The photography setup was basically identical to the previous one, with the exception that the Canon T1i camera was replaced by a Nikon D6000 and its matching AI-chipped M42 adapter.

Here are two views, one from slightly above the area of separation and the above right at it. The scale of these images is probably a little different, because I was careless about the cropping. But now that you know about it, I don't think it will be misleading. 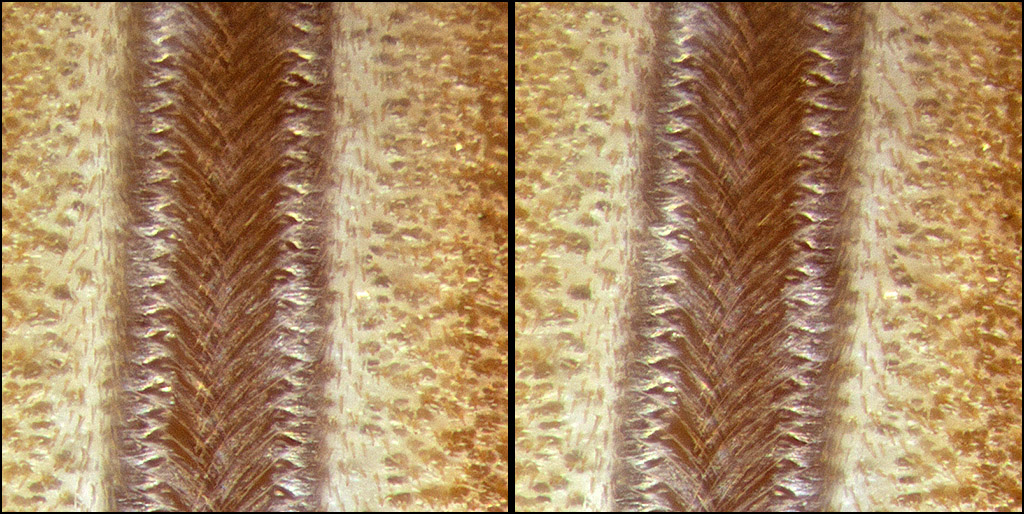 I think it's starting to become clear what is the structure of the "zipper" mechanism here on the dorsal side of the proboscis (the outside of the curl). It appears to consist of a bunch of overlapping flattened scale-like projections that just interleave with each other. I say "just" interleave because I'm not seeing any evidence of hooks at this scale, although of course there could be at a smaller scale and it would make great sense if there were.

This image is oriented the same as the earlier one, so that "down" is toward the end of the proboscis. This means that the projections are pointing against the direction of fluid flow while feeding. While that seemed counter-intuitive when I first saw it, after more thought it makes sense to me in terms of the process the moth has to use to get the two halves joined. As hinted by LordV's photo above, joining starts at the head and proceeds outward. With the projections oriented this way, they will be inclined to nestle together smoothly. If they were oriented the other way, pointing toward the head, then the joining process would be working against their springiness and I imagine they would tend to get tangled up.

According to what I've read, the ventral side of the proboscis (the inside of the curl) is more complicated. I suppose my curiosity won't stop here.

As a technical point about the photography, it's interesting to note that the first image comes from a 101 frame stack, while the second is 210 frames because it comes from a more slanting part of the curl. In these stereo renderings, they appear to be about the same total depth, but that's because in both cases I used +-3% shifts. To give a more accurate comparison, I could have adjusted the shift amounts to correspond to the number of frames, but quite frankly that didn't occur to me until I had already finalized the images. It's something to think about for next time, though.

Edit: to add second view, above the separation.
Top

I assume that the colours showing up on the tips of the "zipper teeth" (some entomologist somewhere must have given these things a technical name) are caused by interference. If that is correct, it would suggest that there is some form of surface sculpting in the teeth which is likely to give significant frictional resistance once the two halves have been intermeshed.

I presume that the teeth are some form of modified scales?

Thanks to NikonUser, who tells us that the technical term is "legulae". Searching on galea legulae lepidoptera as he suggests finds as the #1 hit a book titled "Lepidoptera, Moths and Butterflies / Volume 2: Morphology, Physiology, and Development". This has quite a bit of information, but still not exactly the detail we seem to be looking for. It does note that:

Proboscis assembly takes place in the newly emerged adult, and at least in higher Glossata with a complex linking device it is feasible only before definitive cuticular hardening takes place; hence it is a once-in-a-lifetime event. The assembly proceeds in distal direction from the base, and the initial adhesion of the two galeae is due to fluid (presumably saliva) discharged from the mouth; ...

I agree that the spectral colors indicate some sort of interference effect. However, that could be due to either diffraction from surface structures or reflection from layers. I don't know any easy way to tell the difference. An SEM would tell us quickly and fairly effortlessly, but I don't have one handy.

You have got me looking further...

A look at Imm's General Textbook of Entomology (my copy is the 10th eition, now rather old) gives, at page 1074: - "In the majority of Lepidoptera, mandibles are totally wanting and the maxillae are highly modified to form a suctorial proboscis. The latter is composed of the two greaty elongated galeae, each being channelled along its inner face, and the two are held together by means of hooks and interlocking spines."

From the Journal of Insect Physiology, Vol. 17/4, 1971 we get a tantilising extract at http://www.sciencedirect.com/science?_o ... archtype=a. It says:- "The extension-recoil cycle of the proboscis of several species of Lepidoptera has been studied. Histological examination of the galeae shows that the arrangement of cuticle types compensates for the regions of principal stress and maximum shear obtained by photoelastic analysis of scaled models. The structure of the galeal linkage mechanisms is described. The relative rôles of cuticular elasticity, musculature, and hydrostatic pressure during proboscis extension and recoil are indicated." I must try to dig this out the next time that I am in a good library, as I am not prepared to pay $37.95 for 20 pages to satisfy my curiosity.

Which brings us to http://www.eje.cz/pdfarticles/373/eje_0 ... _Krenn.pdf. This has what we want to see! Lovely pictures of small hooks.

Good images on page 4 of the PDF