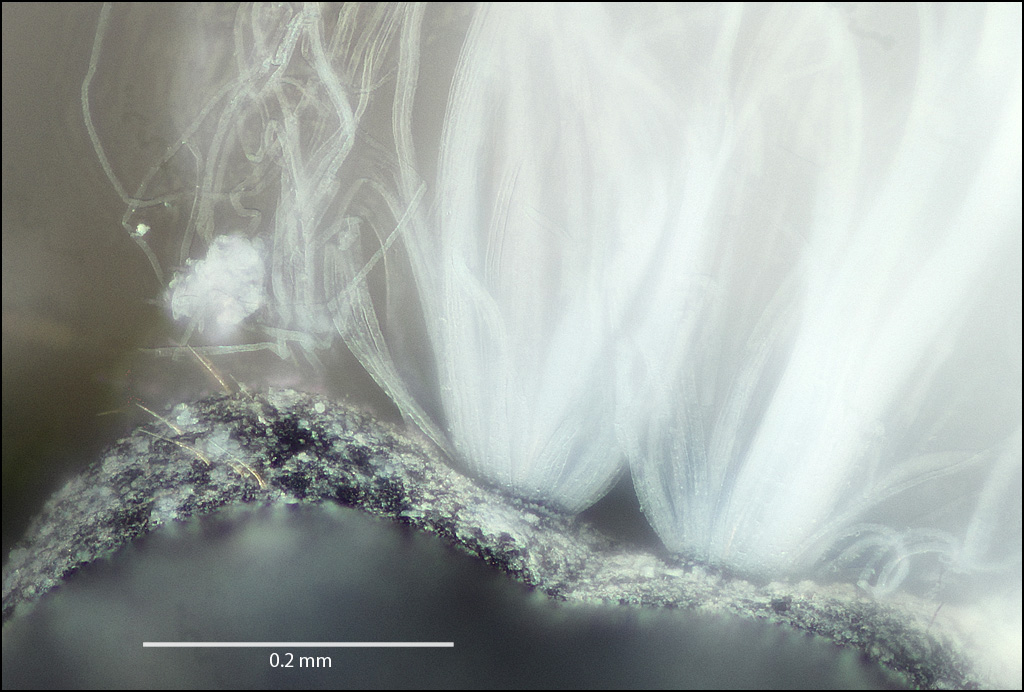 This is a closer view of the woolly aphid that I shot earlier as video, shown HERE.

It's still live, sitting here under a Nikon M Plan 20X NA 0.40 ELWD objective in an Olympus CH frame. In the image shown above, we're looking at the front of the critter's head, shot from basically straight in front. The appearance of a "hollow shell" is caused by the sudden loss of focus at the front of the stack. In reality the critter's head just extends forward until it runs out of the frame.

The critter was not completely still during this sequence, but it moved around little enough that the Zerene Stacker alignment algorithm could track it with no problem. That was while actually shooting the stack, when the motor was running for a small fraction of a second at a time. When the motor ran for several seconds resetting to the beginning of the stack, the one leg visible in the frame wiggled around like crazy. This critter really does not like the sound of that stepper!

In reality the critter's head just extends forward until it runs out of the frame.

I thought you were protecting the identity of the innocent. LOL

So that's his hair? Kind of looks like mine when I first wake up.
Top

Yes. The "wool" of woolly aphids is actually thin strands of wax, secreted from some regions of the cuticle to form these extended structures that look extruded. Wax is a standard component of insect cuticles, where it contributes to impermeability by water. These critters seem to have adapted the mechanism to also provide adornment.

Exactly how the wax is formed into these strands is something I don't know. It could actually be an extrusion process, with the wax being squeezed outward through an opening that determines the cross-section. Or it could just be a surface process in which the cross-section is determined directly by the area of secretion. I have not looked closer, and I don't recall ever reading about this. Perhaps someone else on the forum knows?

It, would be interesting to see a cross section and also a longitudinal section of the wax strands - that might give a clue as to the method of formation, as might a high magnification view of a wax strand's surface. Are there striations, or banding etc.? Is an apparently single strand actually a bundle?...

Embedding and grinding the chilled block might be a possibility to achieve sections. Just examining some of the strands in a suitable mount might be easiest.
Graham

I did read about the ant type aphids some years ago. The ants stroke the aphids and the base of their scales exude the wax, which the ants then clean off. I assume it's the same process.

Ya gotta wonder, what happens on a hot day? And I bet these guys don't use fire. LOL
Top
Post Reply Previous topicNext topic
6 posts • Page 1 of 1