It seems like this critter should be easy to identify, but I've come up dry searching in Cerambycidae (the long-horned wood borers).

Perhaps one of our entomologists recognizes this beast? 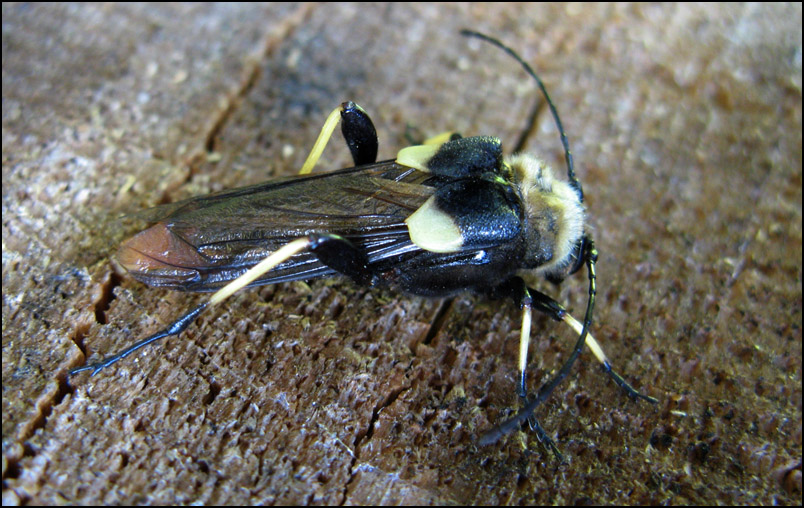 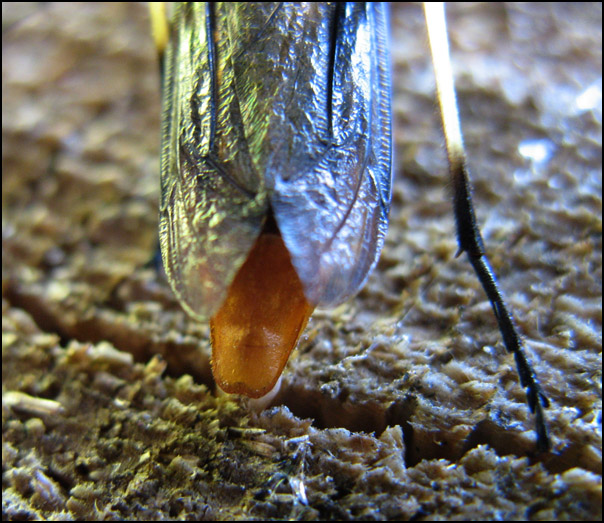 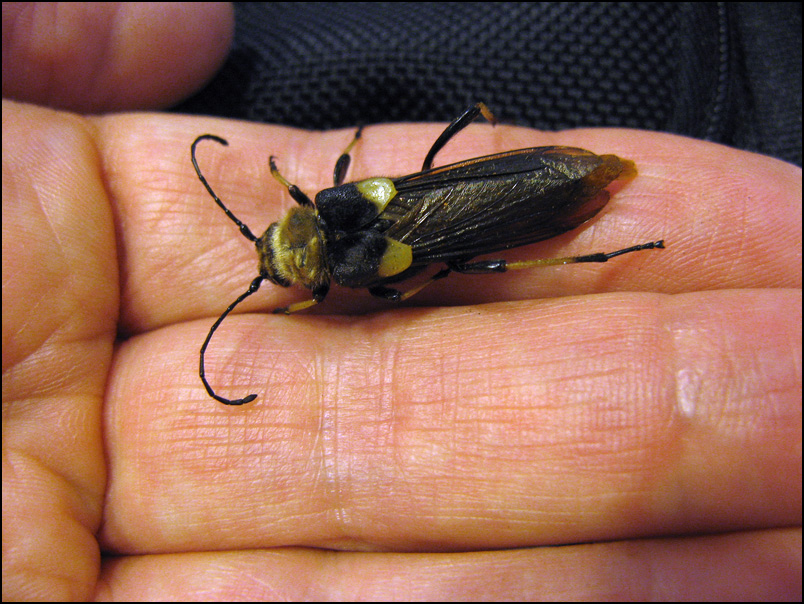 Perhaps somebody else? Is there a good place to ask, other than BugGuide?

I'll go out on a limb here; I doubt that it is even a beetle. If it is, it's somewhat aberrant.
A beetle characteristic is having the fore wings hardened into elytra and meeting in the mid line; wing veins rarely, if ever, are visible.
Your beast seems to have membranous Fws that overlap and with obvious venation.
So what is it? I don't know, perhaps Hymenoptera (that's really sticking my neck out).
NU.
student of entomology
Quote – Holmes on ‘Entomology’
” I suppose you are an entomologist ? “
” Not quite so ambitious as that, sir. I should like to put my eyes on the individual entitled to that name.
No man can be truly called an entomologist,
sir; the subject is too vast for any single human intelligence to grasp.”
Oliver Wendell Holmes, Sr
The Poet at the Breakfast Table.

Well, after I took these photos I also collected the specimen. It looked like such an odd beast, I figured there would be some questions later. And since it spent some time live in a collecting jar, I got to watch it there too.

Shortened elytra with non-folded wings visible at rest do occur in Cerambycidae, see for example Molorchus bimaculatus. The illustration shown in H.E.Jaques' How to Know the Beetles is even more compelling:

However, Molorchus is a small beetle, something like 1/4 the size of this beast, and the general appearance is much different.

What has me bugged is that I figured it would be easy to nail this beast because of the odd appearance, and obviously it's not ringing any bells.

I do still have the specimen, however.

It very well could be a LION BEETLE? Ulochaetes leoninus?

8th beetle down - I believe.

Bingo! How the heck did you find that one??

rjlittlefield wrote:Bingo! How the heck did you find that one??

Never underestimate the value of luck!

I notice that the posting you found is datelined "Eastern Oregon, August 16, 2010". So it wasn't even there on Aug 13, when I posted my question!

I see that BugGuide has one (and only one) picture of this species. No doubt I glanced at it, someplace in the 280 pages of images that I clicked through. But with that many images, I couldn't afford to spend much time studying each one, and I remember thinking "This beast is so distinctive, there ought to be at least one full row of images". Wrong again.