Here's a Zeiss focus block on ebay with pretty sketchy description and blurry pictures: http://cgi.ebay.com/Zeiss-Microscope-Fo ... 0641439745 "This is a focus block from an older Zeiss Microscope that has been mounted to an aluminum plate. It is working but shows some shelf wear and some spotsa of corotion which look cleanable. I am hopeing some one can find a use for it." 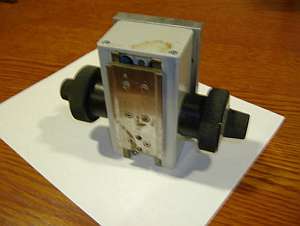 The aluminum plate described is on the back of this pic. Is that a metal dovetail on the front that needs a matching slot or just a hanging mechanism which could be mounted onto and that part moves?
Top

A stage carrier mates with the metal dovetail. If anyone buys this and wants a stage carrier that will fit I have them available. The dovetail is made of stainless steel. And I could furnish X-Y stages too.

Some stage carriers also have condenser carriers on them and others don't.
I think I have both available.
Last edited by g4lab on Sun Jul 25, 2010 6:39 pm, edited 1 time in total.
Top

The fine focusing knob usually is marked in 2 µm intervals and moves 100 µm per revolution. This makes the travel quite slow - too slow for work at medium magnification, and more suitable for work at magnifications above 20x.
--ES
Top

OK, so, theoretically I could drill into that dovetail and make it focus though a proper mounting rack would obviously be much more convenient.

2mm with 2 micron steps is 1000 steps deep. I think I've heard something like 4 microns is good for 40x so that's still 500 steps, which is about right given some slack for an ambitious 300-step stack.

Still it remains to be seen if this one is broken, given the sketchy description.
Top

This looks to me as if it may be from a Zeiss Standard... if so, the fine focus will traverse the whole focus range (if not, I cannot be sure if the fine focus range is limited). The Standard GFL, which has a completely different appearance focus assembly and which this block certainly is not, does have restricted fine focus movement of ~2mm. This why I often prefer to use a Standard, rather than Standard GFL for stacking largish objects.
Graham

this, positively, is a focus block for the larger Standard series, i.e., for WL, Universals and Photomics. The coarse and fine focus run independently, the fine focus doing so for around 2 mm and the coarse movement for something around 5 cm.

Any idea how small of a step is practical for the coarse focus knob?
Top

PaulFurman wrote:OK, so, theoretically I could drill into that dovetail and make it focus though a proper mounting rack would obviously be much more convenient.

I think 0.5 to 1 mm per nudge of the coarse focuser is more realistic for this Zeiss rack. The coarse focus moves the platform quite fast, less than one turn for the whole travel (and the rack moves in the opposite direction of the knob - turn it down to move up). My two racks of this type don't move very smoothly, either - they tend to stick-and-jump a bit in coarse mode.

2mm with 2 micron steps is 1000 steps deep. I think I've heard something like 4 microns is good for 40x so that's still 500 steps, which is about right given some slack for an ambitious 300-step stack.

You can make 1 micron steps without too much difficulty with the fine focus, at least with the older model with all-metal knobs. I don't know about the newer one with plastic knobs.

Still it remains to be seen if this one is broken, given the sketchy description.

The older model with all-metal knobs is as solid as a rock, and there isn't much that can go wrong (unless it has been thrown to the floor or forced with extreme violence). The more modern type with plastic knobs (the one in the picture) is a little more delicate.
--ES
Top
Post Reply Previous topicNext topic
8 posts • Page 1 of 1