This photo was taken with my achromat optics scope using a microsoft webcam. the optical magnification was 40X.

It shows two cilates that I think are Gastrostyla next to an edge-on rotifer.

Any help with the I.D. appreciated. 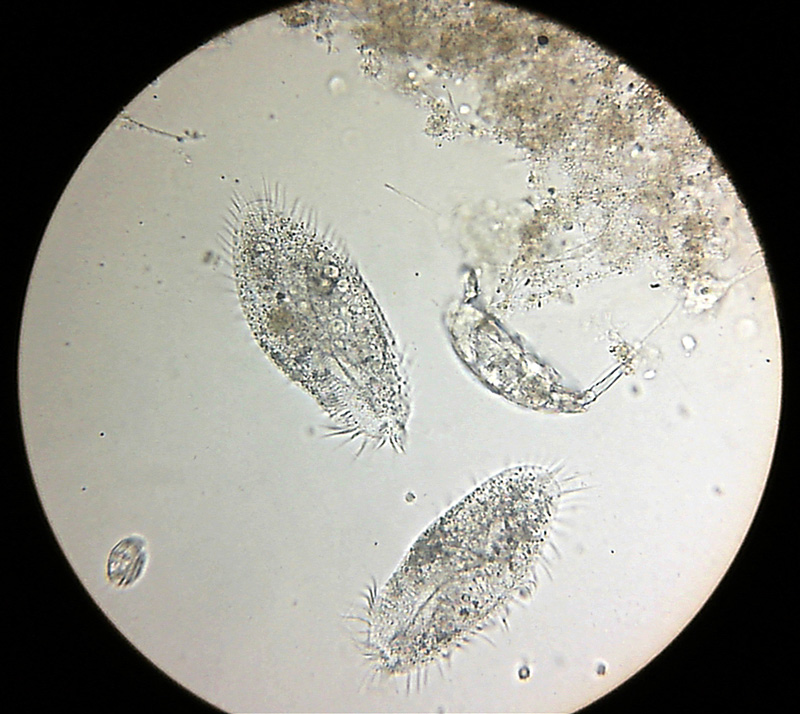 Whatever it is, they are pretty common here in my samples. I identified mine as Stylonychia. Probably wrong though.

From my meager references it looks like theses critters could be either one.

By the way, I haven't seen any vorticella in local waters in the past couple of summers either. Normally I've found them attached to the stems of water plants like duckweed or other similar thin stalks. My last find of them was in a captive jar of pond water in December, 2008. They were free-swimming and attached themselves to the glass slide.

Jim, I started a 'microbe aquarium' a few weeks ago. There is a thread about it here. I started it with plain well water, a few stalks of aquarium plants and two snails, then poured in two jars of river water samples that were about to die.

From that, I have been getting some nice Vorticella, and Stentor, and now, in the last week or two, I am finding three different species of those two toed type rotifers. All I was seeing before were some Bdelloid rotifers. Apparently, there were a few river snails in those jars too, cause I am now seeing two different kinds of small snails scooting around in there.

There are also the usual Coleps, Paramecium, Euglena and other fast movers. What I haven't found recently are amoeba. I am also finding lot's of Copapods. So the aquarium is a success so far. I am hoping to keep it alive for the long haul. At least through the winter, as it's pretty hard to get river samples when there is three feet of ice on the river. LOL

Here's a video of a Vorticella I recorded just yesterday. Near the end, you will see him cut his umbilical and swim away. If you scrub the video over that part a few times, you can see he detaches and leaves his cord behind. I never knew that.

This past fall I made a hay infusion using some rancid straw I liberated from a bale secured in a recently-constructed runoff ditch. The infusion is where I got the subjects for this photo. It is also unusually well stocked with amoeba--particularly on the bottom of the jar.