These are from just sort of dinking around tonight. The culture is from a local drainage ditch, collected a week or so ago and just left on a counter to brew. 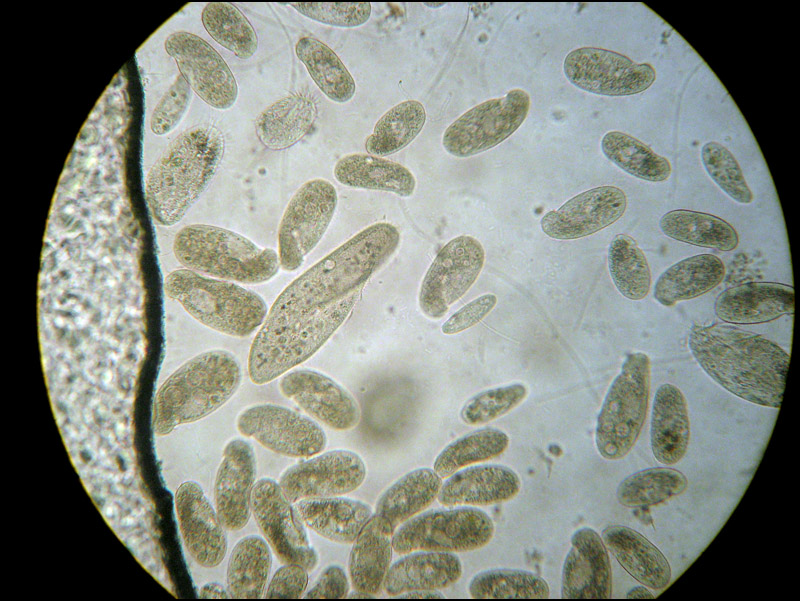 I like the waves of cilia around the feeding groove of this one.
Cropped and resized to 50% of actual pixels, frame width 475 microns. 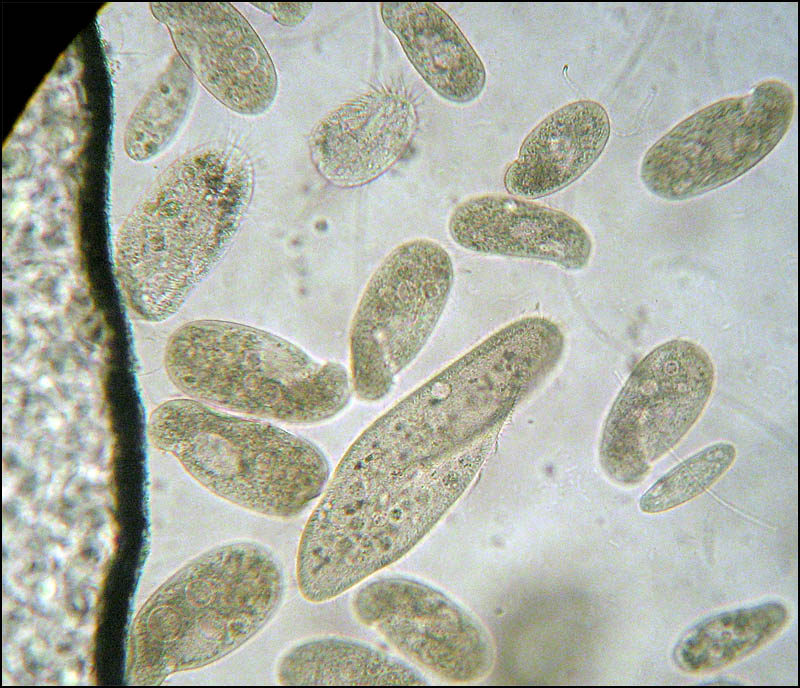 Here, the Paramecium had rotated a bit, and the focus caught the bottom end of the feeding groove, where it necks down into a thin channel that leads to a food vacuole (very small in this picture). 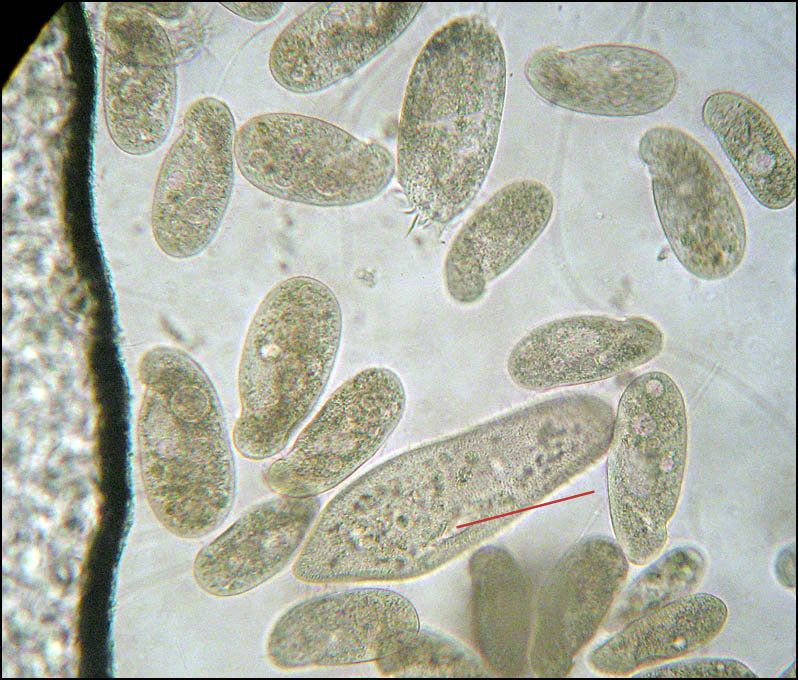 Routine shots, of no scientific interest that I know. A nice collection of different critters.

Nice shots there Rik and a good video. Seems to be quite number of Colpidium in there.

Looks like you got some conjugators in your movie at the bottom of the frame that keep swimming in and out of view.
Not sure of the species. Maybe more than one pair. Neat!

Thomas, there were quite a few conjugating pairs of the sock-shaped critters. They've been at it that way for days, as a population that is. I haven't tried to determine how long an individual pair might take.

Most of critters shown in the video are quite common in this culture, although I have no idea about ID. (Thanks, Ken, for the hint about Colpidium.)

There's one, though, that happened to be caught in the video that I don't recall seeing in this culture before. That's the large light-colored, apparently very planar and flexible critter just to the right of the paramecium as the video starts. Any idea about that one?

Rik wrote:" That's the large light-colored, apparently very planar and flexible critter just to the right of the paramecium as the video starts. Any idea about that one?"

Not sure. Maybe another sort of Paramecium? It's kind of soft like Paramecium can be. Someone will know right off.

It just reminds me that I have to get my scope out for the winter and do some viewing. I do not have a room for it, so when I use it , it winds up on the dining room table

beetleman wrote:...so when I use it , it winds up on the dining room table.

Fortunately we have two tables, or there'd be some serious conflict. "Would you like some syrup with that stack of moth wings?"

But now I'm thinking the living room might be a better place. Live video feed to the TV...should be better than most of what's on the cable!

Turn on the ol' VCR to catch it all...who knows what might turn up?

Are those purple borders chromatic aberrations as seen in "big world" photographs? Is there any specificity related with this problem binding to microscopy? (Huh... what a sentence... wondering could anyone understand what I'm trying to say?

)
If we are learning on ours mistakes I'll become perfectly educated very soon!

Nikola, I have very little idea what you're asking, but I think the answer is "Sort of, but not really, and I'm not quite sure."

The chromatic aberration you usually see is "transverse" (TCA). It amounts to having slightly different image sizes for the RGB components. TCA causes color fringing that varies from none in the center to large on the edges, and it's the same in all directions (radially symmetric).

In these pictures, I see three kinds of color fringes.

The first kind is at the edge of the circular field. It looks yellow on the left, not much of anything on the right. That's probably due to having the camera slightly off-center with respect to the eyepiece.

The second kind is at the edge of the wavy black line near the left side of the pictures. It looks cyan on the right side of the line, not much of anything on the left. That dark line is the edge of a water drop, and I suspect the color fringe is a prism effect from the sloping edge of the drop.

The third kind, which is what I suspect you're really taking about, consists of narrow fringes around the edges of the protozoa themselves. They look sort of like TCA in that they tend to be red/magenta on one side of the critter and cyan/green on the other. But the fringes don't get bigger toward the edges of the field and there's nowhere in the image that they don't exist.

Those fringes had me stumped for a long time. If they were formed by a prism effect at the edge of each critter, then I would expect them to be symmetric with respect to that edge, and they're not. TCA doesn't seem right, as discussed above. I've played with every adjustment on the scope, and I couldn't find anything that changes the fringes very much. I've tried reducing them with PTLens (which works well with most TCA), but whatever makes them better in one place makes them worse in another. So what's going on?!

It turns out (I'm pretty sure) that these fringes are primarily due to longitudinal color aberration (LCA). In LCA, the RGB images are about the same size, but they're focused in different planes. That's a problem when looking at protozoa, since focusing in different planes means that the RGB components are actually showing different structures. No wonder the color fringes don't make great sense!

The reason I say "I'm pretty sure" is from studying these images in Photoshop. Using the Channels tab in the Layers window, it's easy to look at Red, Green, or Blue separately or in any combination. Switching between Red and Green gives an impression very much like tweaking the focus knob. Some structures get more blurred, while others get more clear. In some places (for example the wide part of the paramecium), switching between Red and Green components appears to change the relative positions of various organelles. This suggests that the lens also has a slightly different center of perspective (entrance pupil location) for Red and Green.

The focus shift between Blue and Green is much less than for Red and Green. Relative intensities change for different organelles, but location and focus stay pretty much the same.

I presume that these fringes would go away if I were to use a much higher quality objective, say an apochromat or fluorite instead of my current inexpensive achromat (see discussion here). But that's not going to happen for a while -- the interest-to-cost ratio just isn't high enough to justify it.

As usual, thanks for the question. I had seen these color fringes before, but never investigated carefully enough to really understand them. I feel a bit less confused now...

Here are another couple of versions of the image that might be interesting.

For the first one, I cloned the Green channel image into the Red channel, producing sort of a pseudo-color image in which Red=Green but Blue is the original. It wouldn't work if the original image had really interesting colors, but in this case, I kind of like the effect. For my eyes, it seems to eliminate the distracting and confusing color fringes, while still leaving good contrast and separation for the bugs.

The second is just the Green channel, converted to grayscale and level-adjusted to match what Photoshop did when I just had it convert the original picture to grayscale. This version has the sharpest detail that I've been able to get. 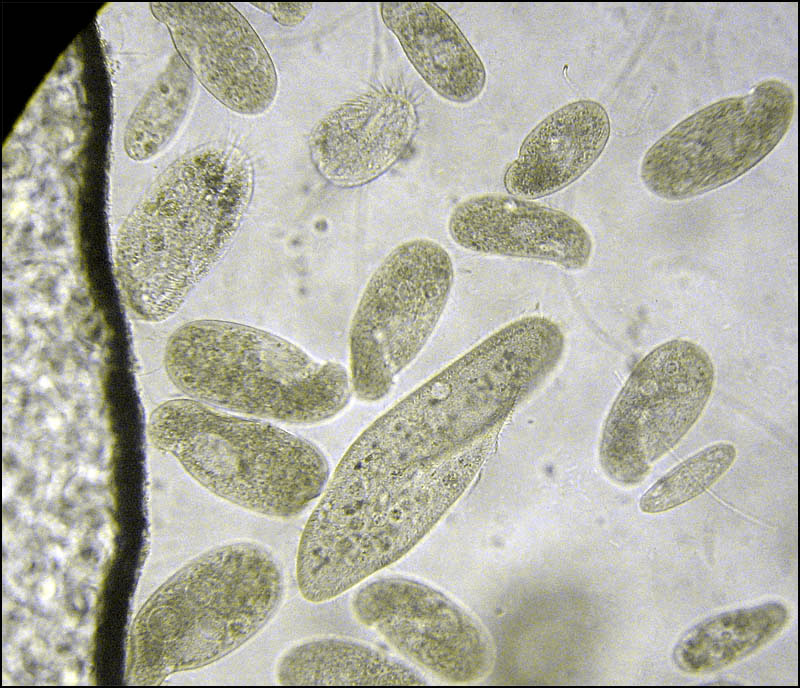 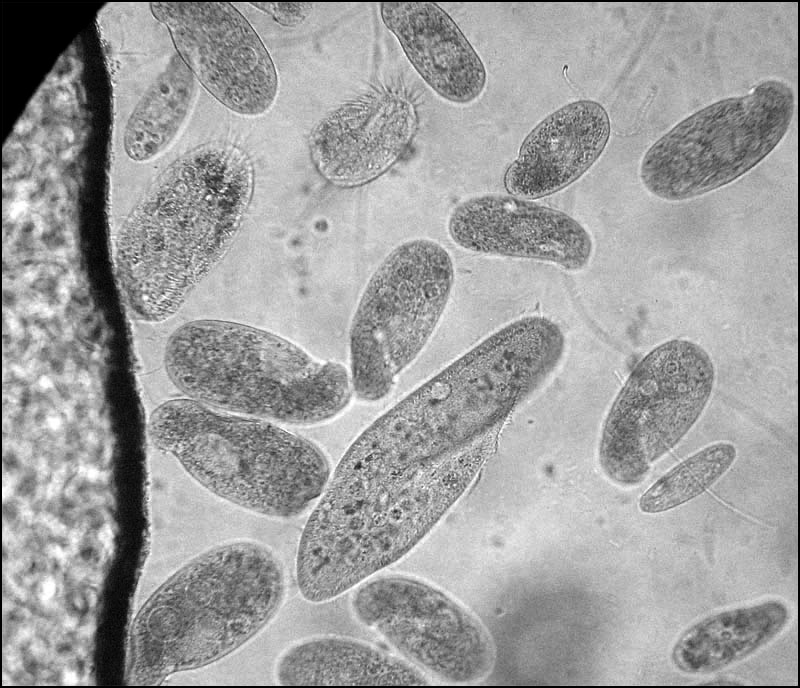 Thanks for comprehensive explanations, Rik.

Last two images are more pleasant for the eyes. This method should be used whenever original colors doesn't matter.
I've seen in the local store some mirror lenses. Wondering if there are such things for microscopes? Mirror lenses should not have problems with chromatic aberrations, I guess, although they surely have some other weakness... but that's another question.

MacroLuv wrote:I've seen in the local store some mirror lenses. Wondering if there are such things for microscopes?

Yes, there are. They are called "reflecting objectives". They are expensive, but have interesting features: no chromatic aberration, usable for IR through UV, and they have very long working distance compared to ordinary lenses with the same magnification and numerical aperture.

Examples currently at http://eolsurplus.com/Microscopes.html are:

These specifications seem almost unreal. 0.5 NA with a working distance of 23.2 mm. Wow!

My current 20X NA 0.4 glass objective has only 3.3 mm working distance. Good ones with less chromatic aberration have even much less.