First post but I've been lurking here for a couple years. Plenty of you folks seem to have an excellent handle on optics so I thought I'd finally have go at a post here with a question.

Anybody know what causes the RGB rainbow "halos" in bright specular highlights? They can't be seen by eye or through the viewfinder and I've seen the problem with multiple lenses. I suspect it has something to do with the digital bodies? Has anybody seen this when shooting film?

Here's a sample. Note the rainbow spots under the abdomen and hairs in the face of the fly. I shot this natural light with a bit of fill flash.
I know how to avoid this but I'm curious what is going on and why the colors are separating. I suppose this is still considered CA?

Hard to tell, it could be both. CA can show at the edges of the out of focus highlights just like the edges of any bright part of the image. Here's an example that shows some of that but also clearly some rainbows from diffraction, from the water droplets I guess: http://www.flickr.com/photos/edgehill/4 ... 9/sizes/o/
Top

Colored spots are a mess.

The effect that Paul shows comes from dispersion, like what a triangular prism does. The edges of liquid drops can act like prisms, shining little spectra in the general direction of the lens. If one of those spectra happens to span the aperture while the drop is out of focus, then you get the effect of a polygonal highlight with an extended spectrum crossing it. The explanation is that the polygonal highlight for an OOF point is just an image of the aperture. If the aperture is evenly lit, then the highlight is uniform bright. If different parts of the aperture are illuminated by different colors, then corresponding parts of the extended highlight change color too.

It is definitely possible for lenses to introduce color, especially for out-of-focus points. See HERE for an example. Many macro lenses will do this. But I don't think this is a good explanation for what we're seeing with your fly because those colors usually depend on which way an object is OOF, near versus far. With your fly the streaks on the abdomen and leg are all on the same side of focus, and the colors change a lot even for streaks that are close together.

It is also possible for a digital sensor to introduce color, at least in theory. But to get a strong color this way requires both that the illuminated point on the sensor is very small and the anti-aliasing filter is not working very well. I don't think the blue and red OOF streaks on your fly's abdomen and legs can be explained this way either.

And finally it's possible for the bug to actually be shining these colors toward the lens. Any transparent and strongly curved part of the bug can act like a prism. You can get interference colors from transparent layered structures or structures with a strongly repeating fine texture (think diffraction grating).

If I had to guess, I'd say these are probably true colors coming off the fly due to prismatic effects. But that is just a guess.

You mention that you know how to avoid this. Does the trick involve a more diffuse light source? If so, it seems to me that would be an argument in favor of true color coming off the bug. Or is it something else, which might argue for a different cause?

Rik
I knew you would jump in on this and eagerly anticipated what you would have to say. You have to be one of the best teachers AND best observers ever born.

But I repeat myself.
Top

Thanks for the input guys.

Yes Rick, more diffuse light solves the problem. This was harsh mid-day sun with a bit of fill flash. Had I used full flash I doubt I would have seen the problem.
I suppose that points it to the prismatic effect of the fly.

g4lab, thank you for the kind words. I just like to understand how things work. Trying to explain them helps that process.

To explore the issue of these colors a bit more deeply, I hauled out one of my standard dead flies and set up a little test in which I illuminated the same fly with harsh and diffuse illumination, and shot it with the same lens from the same position.

Here is the test setup with diffuse illumination. Remove the tissue paper for harsh illumination from the bare fiber.

Here is a summary of the results. 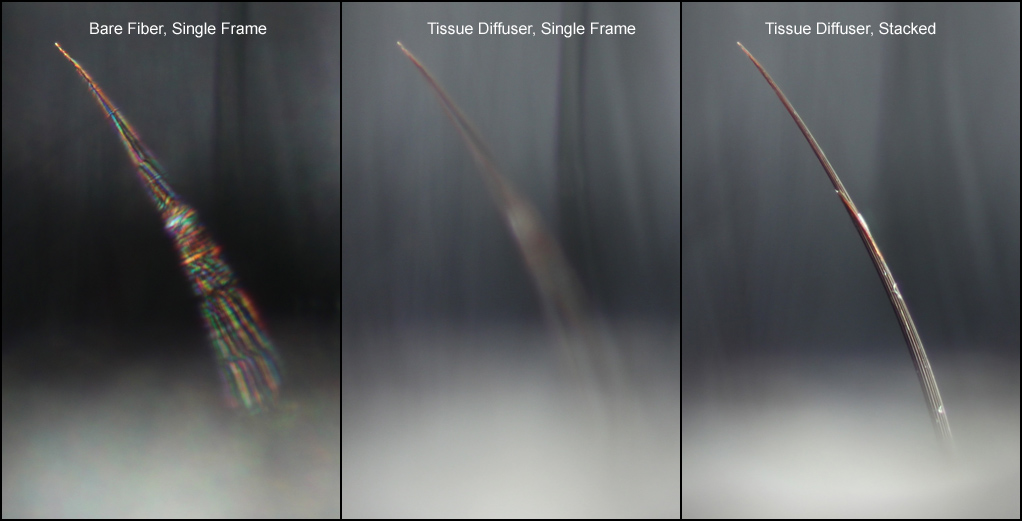 And a closer view of that interesting bristle... 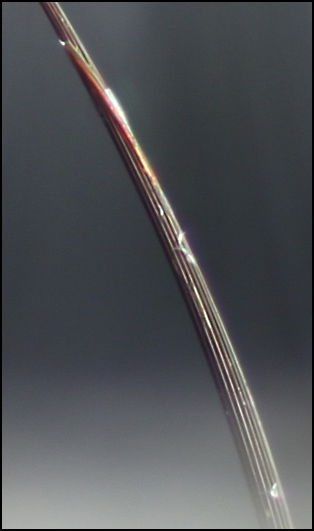 Exactly what process is making the colors, I'm not sure. But I guess it's evident that there's plenty of opportunity for mischief in these bristly little critters!

It's probably worth noting that even the bare fiber is pretty broad in comparison with direct sunlight. The fiber is 6 mm diameter at 130 mm distance, about 2.6 degrees span. That contrasts with only 0.5 degrees for the sun.

very interesting and informative considerations, if possible, could I post one of my images wich show possible effects like this to further the discussion ?
Gustavo Mazzarollo

gmazza wrote:very interesting and informative considerations, if possible, could I post one of my images wich show possible effects like this to further the discussion ?

Yes. In the technical discussion forums, it is OK to post images in a thread that was started by someone else.

In this I found the rainbow effect in the wasp wings, and also some interesting color dots in the body, no colors artifacts in the spider at all.

I'm inclined to believe the wing rainbow is due to this:


it's possible for the bug to actually be shining these colors toward the lens. Any transparent and strongly curved part of the bug can act like a prism. You can get interference colors from transparent layered structures or structures with a strongly repeating fine texture (think diffraction grating).

Have found no explanation for the dots in body, these artifacts were even good to the image but just figuring out what caused them.

f/10 | 1/125s | iso200 (a effective f/stop of about 60, which give about 0,17mm DOF on this magnification)
Canon T1i with Canon MP-E 65mm @ 5x
580 EX II flash bracket mounted with a LumiQuest Mini SoftBox diffuser and silver bounce at right (after the light diffused by the Mini Soft Box).
Gustavo Mazzarollo

rjlittlefield wrote:I just like to understand how things work. Trying to explain them helps that process.

Exceptionally clear reply, regarding the photos and the topic, thanks. I've been exploring this phenomenon for a while and now see how much it has to do with lighting, not so much the lens.

It would be useful to have a word to use for describing this phenomenon. 'Rainbow diffraction', or some such. Diffusion has a huge effect on it which I did not quite understand before.
Top

I would guess colored spots on body are also interference colors. Bright blue is odd as a pigment, common as interference between layers in the cuticle. Some wasps carry this to the extreme of covering their whole body in it, like HERE.

Yes, that must be telling us something. But what? Perhaps the bristle structure matters. Maybe these strong colors only come from striated bristles?


PaulFurman wrote:It would be useful to have a word to use for describing this phenomenon.

True. I suggest "rainbow flashes", since we don't really know the physics yet.


now see how much it has to do with lighting ... Diffusion has a huge effect on it which I did not quite understand before.

I wonder if the fine grooves on the bristles are setting up a diffraction pattern?

Silver coins commonly show a similar color pattern to the wings - related to a thin film of oxidation (silver sulfide) on the surface. The color that is shown is related to the thickness of the film so there is a specific progression of colors that is seen.
Top

mgoodm3 wrote:I wonder if the fine grooves on the bristles are setting up a diffraction pattern?

I wondered about that, but it seemed to me (gut feeling) that there aren't enough of them or finely enough spaced.

When I look closer, that theory seems even less likely. 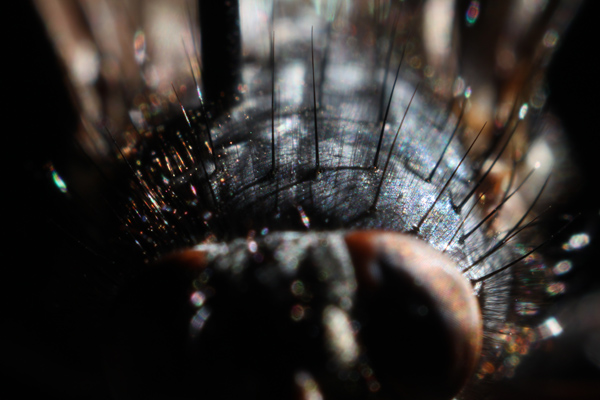 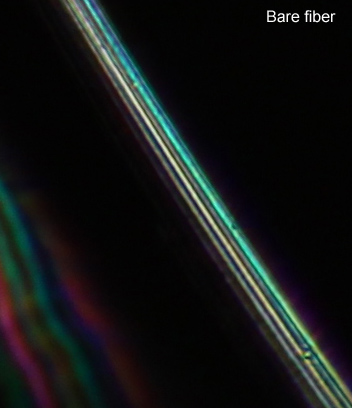 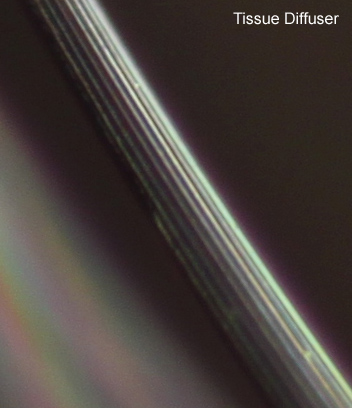 You can see that the top of each striation, individually, is acting like a blue-green mirror.

I suspect that we're seeing interference colors from either layering or much finer striations that don't resolve with this lens. Some SEM shots would tell us, I suppose, but I don't have one handy, nor the specimen prep skills to use it for this problem.

I've been out for a few days and it looks like the thread developed a bit in my absence. Also turning out to be more interesting than I though it would be.

Thanks a lot for the sample shots Rik. Much appreciated!

"Some SEM shots would tell us"
SEM? I'm not familiar with the acronym. Can someone clue me in?