Another day partly spent sitting in front of a huge daisy bush flowering profusely (the daisy bush has been helped along by our beloved red kelpie Chilli who passed away early last year) taking photos of butterflies that love this bush. It's a Painted Lady or Vanessa Kershawi. Apparently it has erroneously been referred to as Vanessa Kershawii but don't quote me on that. Why would the extra "i" be so wrong. I know nothing about double ii's except for the word radii (at least I think I've heard of that word) 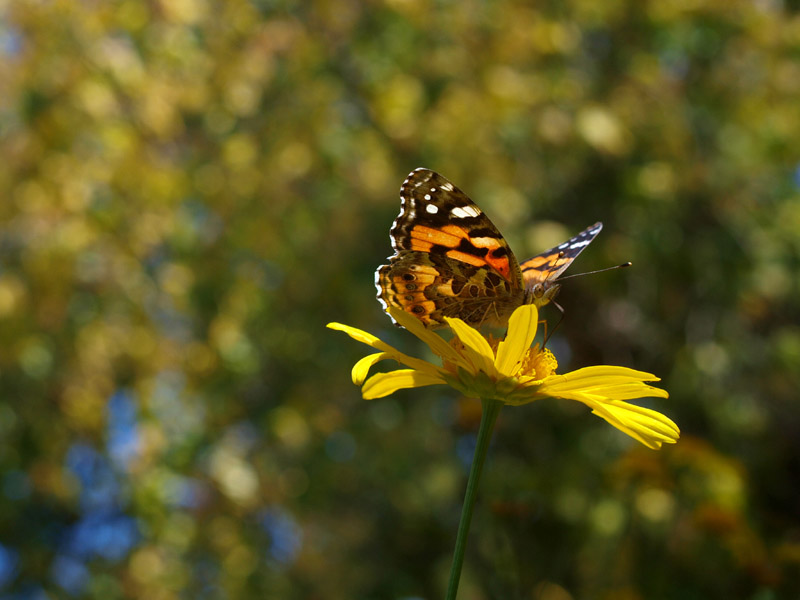 It captures the detail of the Painted Lady and isolates the flower from the background nicely.

That -i or -ii thing has its reason in that the scientific names are derived from Greek or Latin. In this case Latin grammar rules are applied:
Vanessa kershawi (note that the second word which is the species name always starts with a lower case character) translates as Kershaw's Vanessa (or Vanessa of Kershaw). So the author who gave the name has latinized Kershaw to Kershawus, and then according to the second declension (o) the genitive singular becomes kershawi as species name.

Now the Latin noun radius already has an i before the ending -us, so when it is declined according to the o-declension this i is kept, and the genitive singular (like the nominative plural) becomes radii.
So only if Mr. Kershaw from above had been called "Kershawius", the species name would have become kershawii.

Hey Craig, thanks very much!! I could almost call it a butterfly bush because it attracts so many butterflies as well as bees, hoverflies and smaller grey butterflies. Half the time I'm aiming at one butterfly and then realise there's another one sitting right up close but when I move, it's like a shower of wings. Cheers

Hi Betty, thank you very much for taking the time to explain the ii's. I understand your explanation. One thing I don't understand is when you talk about the (o) or o-declension. Apart from that am I right in saying that, for example, Bob Kershaw spotted a butterfly and he liked the name Vanessa so decided to call it Vanessa kershawi ?
Sam

missgecko wrote:One thing I don't understand is when you talk about the (o) or o-declension. Apart from that am I right in saying that, for example, Bob Kershaw spotted a butterfly and he liked the name Vanessa so decided to call it Vanessa kershawi ?

Latin grammar was never my strong point (!), so this "genitive singular" stuff is all Greek to me. The other part, though, I think I understand.

The butterfly's full name is "Vanessa kershawi (McCoy)". This means it belongs to the genus Vanessa and was named kershawi by McCoy. I don't know this specific instance, but usually such names are assigned in recognition of the other person, Kershaw in this case.

The name Vanessa was established long before that to identify a collection of different kinds of butterflies that are closely related, but not quite closely enough to interbreed with each other. This grouping is called a "genus".

The task of assigning a name to a new butterfly essentially consists of 1) deciding what other butterflies it is most closely related to (and thus determining the genus), and then 2) choosing a name for the new butterfly.

Of course later work can determine that the butterfly was misplaced, in which case it moves to a different genus. Or it can determine that the newly named butterflies are not really a separate species but instead interbreed with some other butterflies that were named earlier. In that case the new ones become "subspecies" and the name changes again. Usually there is ongoing debate about these things, either because the situation is not yet clear, or because the situation is clear but is intrinsically ambiguous, such as some interbreeding but not much and with reduced viability.

In a quick search, it looks to me that Vanessa kershawi illustrates most of these aspects! See for example the discussion HERE, regarding its relationship with Vanessa cardui.

I was once informed by Lady Wxxxxx that her pied a terre in Wimbledon (London suburb where the tennis courts are) had eight bathra, all ensuite.

I asked if she called it the Bastille.

Pretty angle on the B'fly, Sam

missgecko wrote: One thing I don't understand is when you talk about the (o) or o-declension.

You could take a look here, or you might decline the invitation

Thanks Rik for the further explanation. Appreciate the time taken. At least I know now how to type the names of insects

Chris - that one's gone right over my head to the keeper

Harold - I can only say one thing -

'To see a world in a grain of sand And heaven in a wild flower. Hold infinity in the palm of your hand And eternity in an hour.' William Blake
Top
Post Reply Previous topicNext topic
8 posts • Page 1 of 1