I'm hoping that someone somewhere has produced a graph with tube length on one axis, coverslip thickness on the other, and a curve showing the minimum for the point spread function.
So far I could only provide one point on the graph, and don't even know what the slope of the line would be about that point

It may be that correction is not actually possible beyond a very narrow range after which things only deteriorate. All I can glean so far is that:
1) At low NA, correction is less needed, and would require large tube length change
2) At high NA, things get so critical that you're likely to lose the image altogether.

I do have an objective CF 10x NA 0.46 0.170, for which it would be nice to know how to optimize the tube length. So far, it doesn't seem to make a lot of difference. Does this mean that the effect of a lack of coverslip is insignificant, or that it's so bad that it's beyond correction? A simple test would be to try with/without a coverslip - but I don't have any! All I can think to try would be a stage graticule, both ways up. Rather thick

I'd like to see that graph too! But I'm not going to hold my breath waiting.

The graph HERE, half-way down on this page, suggests that the loss should not be very bad at NA 0.46.

I just now tested at 20X NA 0.40. There's a detectable difference, but I wouldn't see it without having both images to flash between.

All the great info re: effect of cover glass/no cover glass when using high power (60x) Nikon M plan achromats is disconcerting. My hope was to use this lens (with bellows/ focus block) instead of a microscope for tiny subjects that would most likely be on a slide beneath a cover glass.

I tried a similar test with a 60x. Subject in edge of a moth wing, could not get exactly the same scales (finding a specific object under the 60x lens is challenging).

Difference between cg and ncg is as Charles predicted and as Rik showed for the 40x. 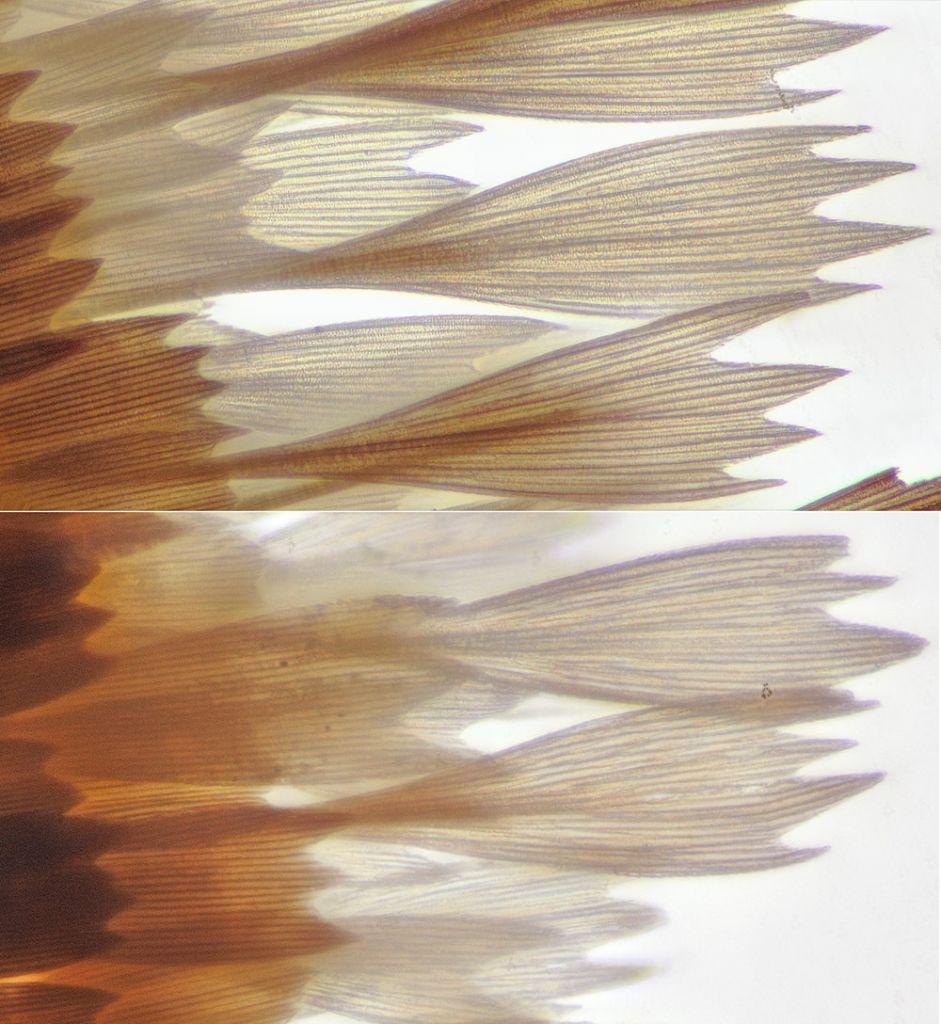 NU10010
NU.
student of entomology
Quote – Holmes on ‘Entomology’
” I suppose you are an entomologist ? “
” Not quite so ambitious as that, sir. I should like to put my eyes on the individual entitled to that name.
No man can be truly called an entomologist,
sir; the subject is too vast for any single human intelligence to grasp.”
Oliver Wendell Holmes, Sr
The Poet at the Breakfast Table.

NikonUser wrote:My hope was to use this lens (with bellows/ focus block) instead of a microscope for tiny subjects that would most likely be on a slide beneath a cover glass.

If an objective is designed for use without a cover glass, then there's no good way to recover if it's high NA and degrades with one.

In theory, if a dry objective is designed to expect a cover glass then you can always add one. Just stick it on the end of the lens if you need to -- it can go anywhere between the objective and the subject as long as it's properly parallel. But in practice such lenses often don't have much working distance. Working distance is not much of an issue when dealing with mounted slides, and lens designers happily cut it as short as needed to get a good image.

So I think you're stuck. If you want to work under a cover slip at high NA, you need a separate objective designed to do that.

It may not work for any lens at all (apart from image diameter and magnification change) but but as there's considerable sensitivity variation within the range of NAs, say 0.5 - 0.95, the possibility of magic sweet spots, waiting to be discovered, is enticing.

I've not been able to do more than a quick test, with a hard-to-focus bellows set-up.
However, looking through a NIkon CF 40x/0.65/160/0.170 with no cover glass, I reckon there's an improvement on the short-tube side of 160mm (and a worsening on the long). I was looking in the range down to about 105mm, where my arrangement of camera + bellows + adapter, stopped.
Worth another try, and a comparison with a "stretched" 20x 0.4 Mplan.
Top

rjlittlefield wrote:Google search on tube length spherical aberration will find many references about this effect.

One microscopy-uk article talks about cover slip thickness versus tube length. It says that having too thick cover glass and/or mountant can be compensated by reducing the tube length, but that with typical microscopes this approach is pretty limited due to the mechanical design. Of course with bellows there would be more flexibility. The corollary is that having too thin cover glass could be compensated with a longer tube. Presumably there is some formula to say how much additional tube is required to compensate for any particular excess or deficiency of cover glass, but offhand I don't know where to find that. The article also discusses how to tell when the spherical aberration has been eliminated, so presumably this could be investigated experimentally. Judging from the images in the article, it should be pretty easy to evaluate using magnified Live View.

Another interesting reference I ran into from the Google search is HERE, titled "Increased resolving power in the presence of spherical aberration", a 1927 article by R.Kingslake et.al., in which it is discussed that when dealing with point sources (stellar astronomy), one can actually get enhanced resolution by having a specific and fairly large amount of spherical aberration. Quoting from the summary:

This result is very interesting, as it shows that a lens with a decidedly undesirable amount of spherical aberration can actually give better resolution on close double stars than a perfectly corrected objective. It should, however, be carefully noted that such a lens could not give a clear image of an extended object. The resolution of close double stars must occur within the broad bright diffraction ring which surrounds the small central dot of light, and, owing to the large amount of diffused light, an extended object such as a planet or the Moon would appear so fogged that clear definition would be impossible.

This is new to me. Fascinating!

This comes across as a "contrast vs spatial resolution" dichotomy to me. Sometimes one can resolve (ie distinguish) very small objects that are close together at the expense of large-area contrast loss. In MTF terms, the system would have a poor low-frequency MTF but a relatively good high-frequency MTF.

Does such a description sound correct to you or is the Kingslake quote about something else?
-Phil

DQE wrote:This comes across as a "contrast vs spatial resolution" dichotomy to me. Sometimes one can resolve (ie distinguish) very small objects that are close together at the expense of large-area contrast loss. In MTF terms, the system would have a poor low-frequency MTF but a relatively good high-frequency MTF.

Does such a description sound correct to you or is the Kingslake quote about something else?

The situation that Kingslake describes is significantly different. Quoting from the introduction:

Showing a little more of the article's summary than I did before, Kingslake writes that:

...thus we see from these experiments [and the accompanying theory] that the maximum visual resolving power for close double stars will be obtained when there is spherical aberration present to the extent of 1.5 times the Rayleigh limit.

This phrasing is not perfectly clear to me, but I believe he is saying that under "ideal" conditions the telescope has 1.5 times the resolution that you would expect based on its aperture.

I'm using "ideal" here in a rather strange way. Not only does the required amount of spherical aberration make the scope useless for viewing extended targets, but at the time of Kingslake's work, the spherical aberration would have been introduced accidentally and transiently as a result of temperature changes!

Your description in terms of the MTF sounds correct. But in the situation Kingslake describes, the tail end of the MTF is modified to be usefully above zero far beyond the Rayleigh limit. I suspect that it falls to zero at some frequency below that, then rises again, thus making it useful for double stars lying close together even though there are other coarser patterns that it would see as uniform gray.