Has anyone seen a direct comparison done on the Olympus 20mm f/2 versus the 25mm f/2 Photar?
Thanks,
Dan
Top

I have done a comparison of both. The Oly outperforms the leica by a bit. The difference in the lenses for me is that I can use the leica down to about 2.5:1 (directly mounted on my camera with an adapter. The Oly is limited to about 4:1 (maybe closer 5:1, I forget) and up because of its length, short focal length and adapters.

the sharpest aperture for both is about f2.8
Top

The lowest mag I can get with an Oly 20/2 on a PB4 with adapters is 7x. At that, it's just a bit sharper wide open. Perhaps it varies with magnification?
Top

Both lenses work well without a bellows.

My own testing for sharpest aperture involved MTF slant line testing (Imatest) at one mag. I only test the center sharpness as testing is not as easy at high mag.

I test all lenses at various magnification for overall performance. The Oly is a very good lens.
Top

My experience with these lenses matches mgoodm3's (though my testing has not been nearly as rigorous as his!): the Zuiko seems slightly sharper than the Photar, and my f/2.8 shots look a little sharper than the f/2.0 for both.

Here are a couple of examples of both lenses -- treated the same way as much as possible, though these are all shot at f/2.0. Subject is a beat-up Ulidiid fly, genus Paragorgopsis.

A bit of a digression to this thread - I have never owned or used an Olympus OM Zuiko 20mm f/2.0, but I previously owned and tested two Photar 25mm f/2.0 lenses (at 6X). I found (like Eric F. reported) that they were sharper at f/2.8 than at full aperture, but both of my Minolta Bellows Micro 25mm f/2.5 lenses beat them at this same setting. The two Nikon Plan Apo 4/0.20 lenses I've tested were indistinguishable from each other in performance at this magnification, and both were superior in resolution and contrast to all of the other lenses on the DX format.
Top

For me, the Zuiko 20mm seems to perform a bit better at f/2.8 than wide open at f/2.0. ChrisR's comment about the difference in quality between the on-camera LiveView image versus the computer image (the camera presenting a truer indication of image quality) is very interesting. Unfortunately, I haven't really tested this: on my vertical photo stand setup, the camera LCD is exceedingly more difficult to view than is my 24" monitor!
Top

Interesting. I believe Rik finds his better at f2.0.
Testing times ahead...

ChrisR wrote:Interesting. I believe Rik finds his better at f2.0.
Testing times ahead...

True -- this was too tantalizing to pass up. 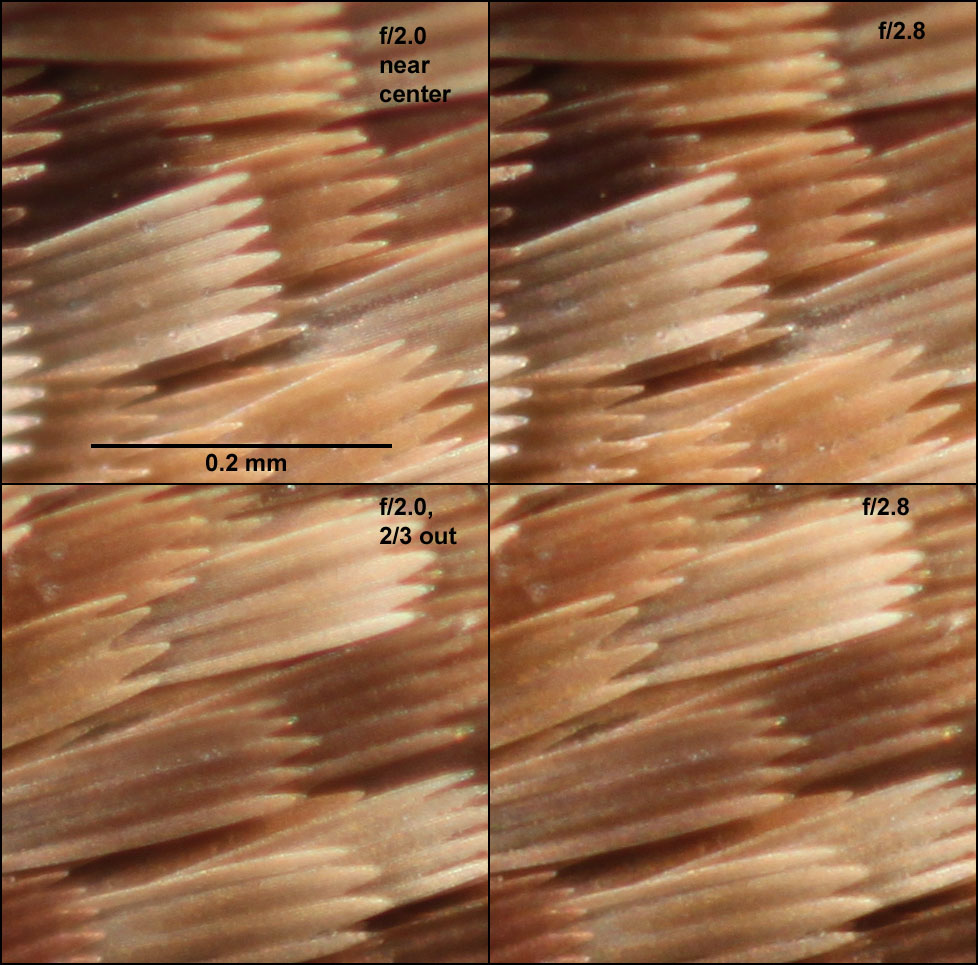 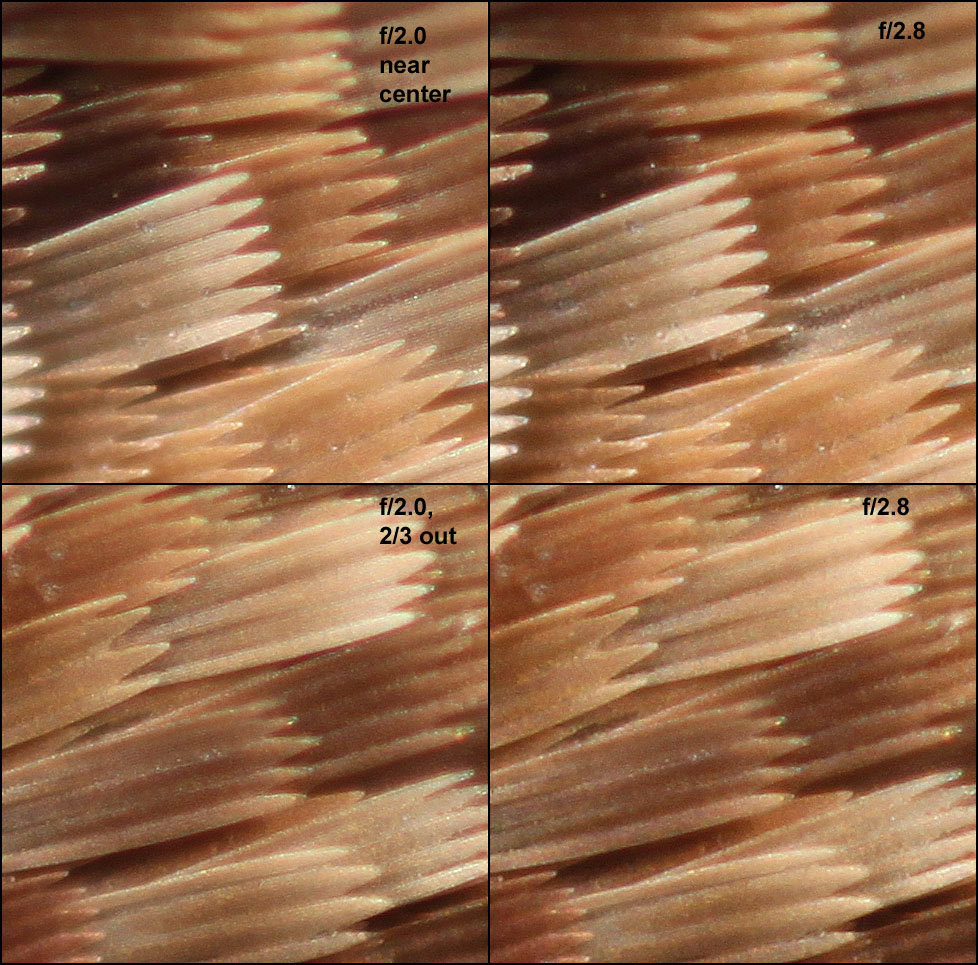 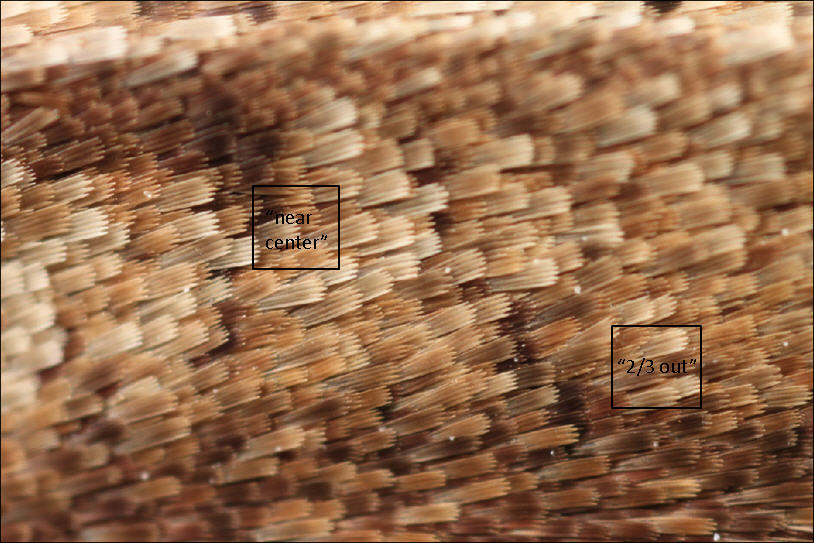 The way I see the crops, f/2.0 wins big in the middle and stays somewhat better farther out.

Perhaps we're looking at sample variation, say one lens has more uncorrected aberration and benefits from stopping down?

The other thing I'm puzzled by is that my crops seem to cover a much smaller area than Eric's, and I'm still getting near pixel-level detail. So Eric's look less sharp, and I have no idea why that would be.

The other thing I'm puzzled by is that my crops seem to cover a much smaller area than Eric's, and I'm still getting near pixel-level detail. So Eric's look less sharp, and I have no idea why that would be.

I'd like to know too! Maybe it is faulty procedure on my part (I'm still just 'winging' this photography stuff!). Maybe it is the diffuser technique I'm using: the Chinese vinyl baseball hemisphere (like a giant ping pong ball) -- which I adopted to ensure the Zuiko & Photar (very different sized lenses) had the same lighting. My original frames are 28.8M (3888 X 2592) in size, if that adds useful info.

One question for you Rik.

How did you take those pics? Since they have the same crop area, were they taken in sucession with the aperture clicked between? If so, that may be enough to skew the results as critical focus is a very tricky business at high mag.
Top

We are really scrutinizing this. While I've never tested for it, looking this closely at this magnification, it would not surprise me at all if there is a slight blur introduced by the shutter even when electronic flash is used. So if you are really trying to look solely at lens performance it would be best to first compare a "normal" flash shot (at or near sync speed) with a second shutter curtain flash (flash fired at the end of a 1 or 2 second exposure, very subdued room light) to insure that you are looking at lens performance rather than a very slight blur caused by the first shutter curtain. I would test this with a single image rather than a stack. (And as mgoodm3 alluded to, I would do several shots of the same detail re-focused each time. It's amazing how minuscule focus variations show up under this type of inspection).

In some cases this might also explain why the image may actually look better in enlarged "live-view" than in the final image on screen.

Remember this thread (and the other threads it links to):
http://www.photomacrography.net/forum/v ... php?t=9088

Also, while I don't think this is in play here (and is in general not a big concern), it should also be mentioned that with electronic flash it's possible, with a "wispy" subject to cause the subject to move due to the "blast" from the electronic flash.

mgoodm3 wrote:How did you take those pics? Since they have the same crop area, were they taken in sucession with the aperture clicked between? If so, that may be enough to skew the results as critical focus is a very tricky business at high mag.

To directly answer the question, I set the aperture ring on f/2.8 and used the flipper on the bellows to switch between f/2.8 and wide open f/2.0.

To address the concern, let me talk through what else I did.

There was a slight and transient lateral shift of the image while my fingers were touching the bellows or camera, but no indication of focus shift.

After the images were in my computer, I did further checks for any misleading shifts, by layering the images in Photoshop, doing click-to-flash comparisons, and looking for any evidence of lateral or focus shift. I could not find any.

I also studied the images looking for any places where the f/2.8 image was sharper than the f/2.0 image. There are quite a few of those, but they are all in areas where both images are slightly out of focus. In these areas, both images are noticeably softer than best focus, but the 2.8 image has softened less due to its greater DOF.

Normally I recommend that lenses be tested in the same way they will be used, because sometimes there are unforeseen interactions that affect the results. In this test, I opted to compare single images rather than stacks in part because it was a little simpler, and in part because I wanted to get a direct comparison of the optics by themselves.

By the way, when you're shooting a set of single frames at various apertures, one thing to watch out for is focus shift due to the optics. It is very common for reversed general purpose lenses to have significant focus shifts over the first few stops, due to under-corrected spherical aberration. See HERE, for example, the Mamiya Sekor 55 mm f/1.8 in the second column of the second panel.

I would test this with a single image rather than a stack.

I've been going cross-eyed trying to see whether stacks are as sharp as some single shots. Am I right in thinking that for pixel-peeping, the C of C should be thought of as no more than one pixel, just to be safe?
That of course is much smaller than the frame width/1000 that we are typically using.
AT 7x, f2, DOF becomes about 5 microns.

Am I right in thinking that Pmax could get information from slightly-less-sharp frames, and with Dmap it depends on the settings?
Top

ChrisR wrote:Am I right in thinking that for pixel-peeping, the C of C should be thought of as no more than one pixel, just to be safe?

That's certainly the right approach. CoC just formalizes a judgment call about what's considered "sharp". If you're studying the pixels, you need some correspondingly small CoC.

It's a much harder question, to ask whether the small CoC should be 0.5 pixel, or 1.0 pixel, or something else. I think it depends on the subject and what you're looking for.


That of course is much smaller than the frame width/1000 that we are typically using.
AT 7x, f2, DOF becomes about 5 microns.

Yep. And jockeying around with a screw table at 7X optical and 10X Live View, I can see that the image changes noticeably in that little distance.


I've been going cross-eyed trying to see whether stacks are as sharp as some single shots.

If image alignment is required, then interpolation takes its toll, and the toll is unpredictably different from place to place in the image. The pixel pattern 1,3,1,3,1,3 stays 1,3,1,3,1,3 at lucky places, becomes 2,2,2,2,2,2 at unlucky places, and does something in between at most places.

You can stop that from happening by turning off all the alignment options -- no shifts, rotation, or scale.

But then if your rig does not track perfectly, adjacent frames may be slightly shifted. Then blur from combining frames will take its toll, and that toll is unpredictably different from place to place also.


Am I right in thinking that Pmax could get information from slightly-less-sharp frames, and with Dmap it depends on the settings?

But that simple description only applies if images are well aligned. If there's a little shift between two images, then PMax is almost guaranteed to render the result as a smear, while DMap will give a smear in some areas but a clean result in others.

Adding to the difficulty, PMax generally increases pixel noise while DMap doesn't. For low contrast detail on a smooth surface, sometimes DMap will pull out detail that gets lost in the noise with PMax. But other times DMap will miss such detail altogether while PMax properly finds and preserves it, albeit in a sea of increased noise.