After a long time of read-only participation in this forum I now like to show a few images of an amoeba attacked by a fungal parasite. The amoeba of the genus Mayorella, shown in Image 1, was collected in springtime in a newly created pond. The two photos show different stages of movement of the amoeba, which was about 70 µm long (N: nucleus). 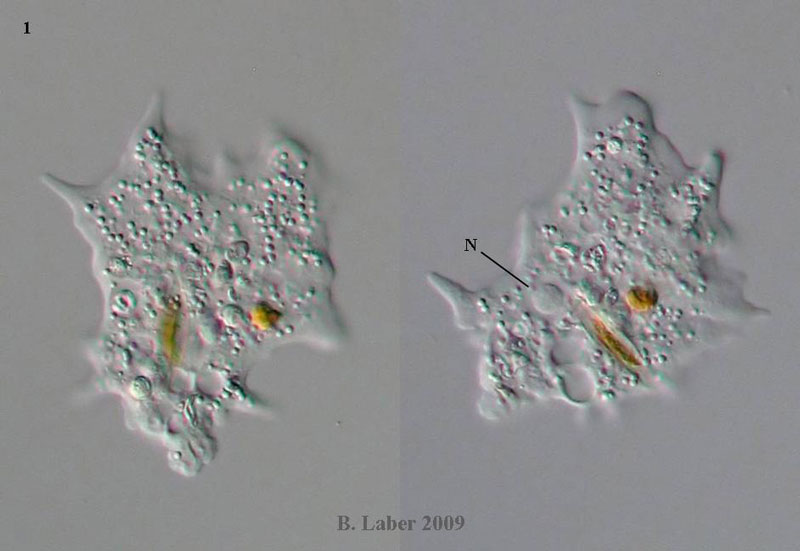 Image 2 shows a Mayorella which is attacked by the parasitic fungus Amoebophilus. When an amoeba tries to ingest an Amoebophilus-spore, the spore sticks to the outer membrane of the amoeba and is induced to germinate. The germinating spore (PS) penetrates the membrane and forms a lobed feeding organelle (haustorium, H) inside the body of the amoeba. Then, Amoebophilus forms a chain of asexual spores (S) for propagation at the amoeba´s exterior. 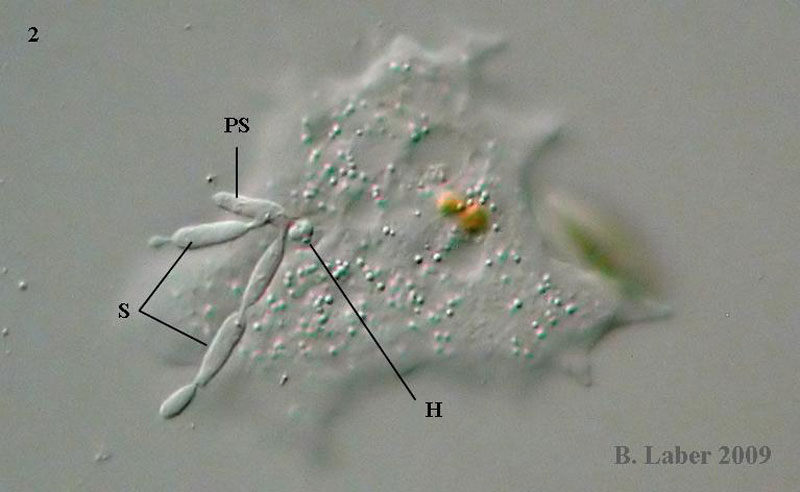 Image 3 shows a close-up of Amoebophilus. 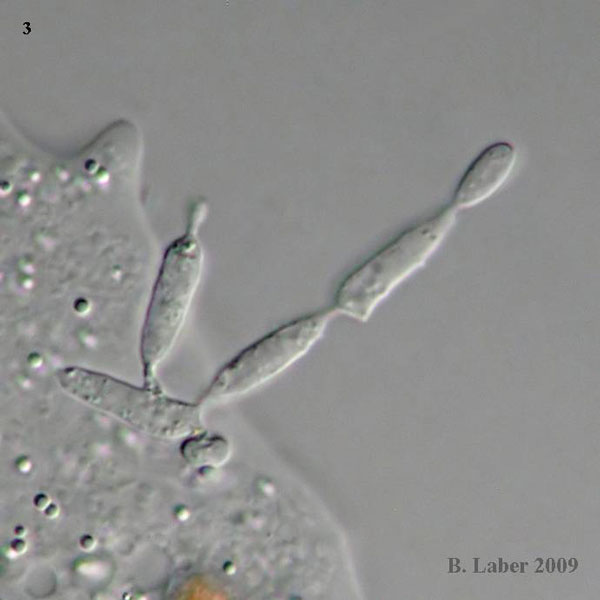 A detailed description of the life of Amoebophilus can be found on the „War of the Microworlds“ website http://www.uoguelph.ca/~gbarron/2008/amoebo08.htm

Fascinating! Thanks for the excellent pictures and the link to more discussion.

Thanks for these images. I have seen these myself once or twice. It is a great mystery to me that Leidy, the first and foremost of American parasitologists (and protozoologists) clearly saw this and drew them:

And even all but said "These are fungal parasites" . . . see the bottom portion of: http://www.xmission.com/~psneeley/Personal/Fwr069.htm

But was 'cowed' by a previous researcher’s assessment? It simply stymies me that he didn't immediately publish his conclusions in a more forceful manner
Top

Most interesting, and very well documented!

Thanks for sharing, Bernd!

I think it is very difficult to read into the mind of a 19th century microscopist coming across something like this for the first time - how on earth to interpret what you see!

Leidy obviously struggled with this. His first interpretation seems to have been that the filaments were fungal and then he rejects this (bottom of p67 http://www.xmission.com/~psneeley/Personal/Fwr067.htm )

"When first seen, I regarded the animal as an Amoeba proteus dragging after it a bundle of mycelial threads. The recurrence of several individuals led me to examine the animal more attentively, when I came to the conclusion that the threads were part of its structure"

He also raises the objection to the filaments being fungal (page 69 http://www.xmission.com/~psneeley/Personal/Fwr069.htm ) as there are no hyphae inside the amoeba:

"an important objection...is, the caudal filaments do not grow from a mycelium within the protoplasmic body of the animal"

He obviously came ultimately to the conclusion that these filaments were an integral part of the amoeba as he created the separate genus Ouramoeba to accomodate amoebae with these filaments.

http://jcs.biologists.org/content/vols2-15/issue58/ and go to "Proceedings of Societies" and page 203 in the pdf.

One of the problems they clearly both had, was that neither of them had seen a illustration of the amoeba seen by the other. The poor people had not got the internet or photomacrography.net !!

Archer, by the way, was only an amateur, albeit very skilled and enthusiastic - he would have been very happy on this forum !

Despite having an electronic copy of the Leidy on my computer I was not aware the he had described and depicted amoeba infected by Amoebophilus. Thank you for telling me.

Your comments prompted me to look for Ouramoeba in Cash´s 1905 Monograph “The British Freshwater Rhizopoda and Heliozoa” (which can be downloaded as pdf from http://www.archive.org/index.php) and I found the genus described there, too (Vol. 1, p. 83):
“Body amoeboid, with a granular endoplasm, a single contractile vesicle, and discoid nucleus. Pseudopodia digitate, arising from any part of the body-surface, usually anterior; the posterior extremity habitually furnished with one or more tufts of rigid, linear, non-contactile protoplasmic filaments, branching radially from points in the vicinity of the contractile vesicle. The posterior filaments, which are the pecularity of this genus, alone distinguish it from Amoeba. These filaments are sometimes cast off, and by some authors have been held to be of no physiological significance.”
In the description of the only species of this genus, Ouramoeba vorax (pp. 83 – 85), which is depicted on Plate 5, there is on p. 85 the statement “Penard mentions the occurrence of similar caudal filaments, which he regards as parasitic (Fauna Rhiz. du Bass. du Lemane, p. 66)”. Penards book was published in 1902.

It seems to me that the genus Amoebophilus was created by Dangeard in 1910 (http://zygomycetes.org/index.php?id=139), possibly based on drawings published by Korotneff in 1879 – 1880.

This story has more wrinkles....

James Cash was again just an enthusiastic amateur. He was in contact with Penard and familiar with his work, but did not have access to much of the literature. He died in 1909, before the second volume of his treatise was published later that year. That volume is also available for download from archive.org. In the introduction, written by Hopkinson (page xii) there is a corrigendum:

" CORRIGENDUM TO VOL. I.
Ouramoeba vorax, p. 83.
IT was the intention of Mr. Cash to state in the present
volume that he had become convinced that the " non-contractile
protoplasmic filaments," on the presence of which the
genus Ouramoeba was founded by Leidy, had been proved to
be merely parasitic filamentous algae, as in Penard's Amoeba
nobilis mentioned on p. 85. The genus therefore falls, and
the species (vorax) may be only a form of Amoeba proteus.
This question was discussed by Dr. Penard in 1902 in his
'Faune Rhiz. du Leman,' pp. 67-69, and again in 1905 in
the ' Revue Suisse de Zool.,' vol. xiii, pp. 587-588. "

Curiously he considered it to be a parasitic alga (or did he misunderstand Penard's french?)

It seems to me that neither Cash nor Archer had considered closely or thought incisively about what they were looking at. Leidy did look, think and struggle with his interpretation. Unfortunately, in the end he made the wrong decision.

I also came across the following from the journal Nature:

"DR. W. L. PoTEAT of Wake Forest College, N.C. (U.S.A.), published in NATURE of May 24, 1894 (vol. 50, p. 79), a letter recording his finding of Ouramoeba in Wake Forest, N.C., and asking for citations of other records. To this inquiry Mr. Rowley's note furnishes a late reply, for there has been no other (in NATURE) in the interval. There is now, however, a good deal of literature on the subject. Ouramoeba, as Dr. Poteat was the first to demonstrate beyond doubt, is simply Amoeba spp. (A. nobilis Penard, proteus Rosel, binucleata Gruber, villosa Wallich) infested with fungal spores and filaments. In 1898, Mr. Martin F. Woodward of the Royal College of Science sent Dr. Poteat drawings of an infested Amoeba presumably found in the neighbourhood of London (Science, N.S. viii., 1898, p. 781). There does not appear to be any other record for England. The latest memoir by E. W. Gudger, "On Leidy's Ouramoeba," is in Journ. Elisha Mitchell Sci. Soc., xxxii., 1916, p. 24. "

I'm just dropping in to say that I'm enjoying this discussion a lot.

The biology is new to me, and I'm fascinated to hear the history of its interpretation.