This weekend a non-photographer friend and I went to visit a small Oklahoma town and do a bit of sightseeing while spending some time together. It wasn't a photo trip, so I "compromised" and brought along my 40D and 17-55 zoom, and left all the macro and telephoto stuff at home. On one of the main drags through town, I could see a historical marker that said something about "Home on the Range". For the non-North Americans among us, "Home on the Range" is a classic Western song (begins "Oh give me a home, where the buffalo roam....") that most Americans sing as children in school music classes. While zipping by on the road, I couldn't read more than the song title, but wanted to find out what the rest said. The marker was at the edge of a cemetery, and parking along the road was hazardous; my fellow traveler was shrewd enough to go around the block to the cemetery entrance so we could come at the marker safely from the cemetery side. When we parked as close as the auto route through the cemetery would take us, I noticed a large, rather gaudy marker shaped like a log. The gritty sandstone<?> it was made of hadn't worn well, but there was a seal proclaiming that the marker had been erected by the "W.O.W." 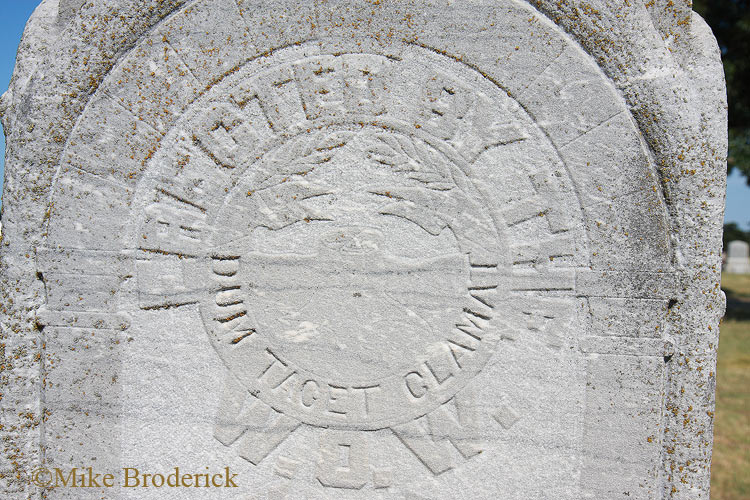 I had no clue who the W.O.W. was, it inspired vague memories of the "Wobblies" a radical union in the 1930s, but I was pretty sure they were the W.W.W., not the W.O.W.. I was curious, but had no idea who the group was. But I could see a similar but different marker fifty yards or so away: 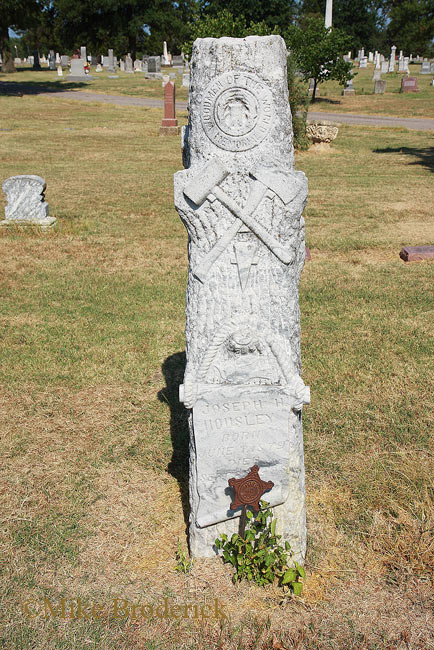 This one was more elaborate, and better-preserved. Even more important, it spelled out that the sponsoring group was the "Woodmen of the World". I had no idea who that group was, but I did have an "ah-ha!" moment, because I remembered seeing the name on a building at the edge of town, and thinking it was rather strange.

Exploring around the cemetery, we found these markers were quite common, in one case I easily got three in the viewfinder of my 17-55, with a fourth one not far away, but not in the picture. 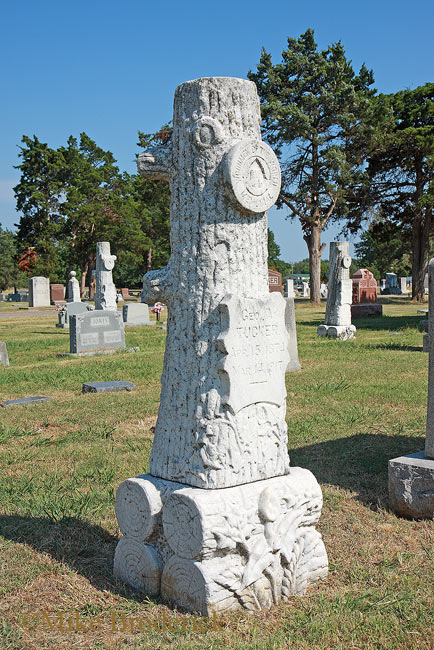 All of them shared the log theme, and all of them memorialized people buried in the first 1/4 of the Twentieth Century.

A quick trip back to the edge of town let me capture this scene (barely!) within the limits of the frame. The local chapter of the Woodmen of the World seemed to be having hard times, as their building was there, but was up for sale! I smudged over the phone number in this photo:

When I got home, I did some online research. Wikipedia was extremely helpful. It seems the W.O.W. was an organization founded about the beginning of the 20th Century, with two separate goals of doing various do-gooder things such as ensuring that young city boys could take camping trips, as well as making affordable insurance and survivor's benefits available to members. The name came from a sermon that inspired one of the founders, which dwelled on how "pioneer woodsmen cleared away the forest to provide for their families." Wikipedia even explained that the organization had offered cemetery markers like the ones I'd seen, but that the program was discontinued due to excessive costs! Here's the link to the Wikipedia article for anyone dying to know more...

Not a great adventure or scientific discovery, but I enjoyed doing the exploration, photography (under the mid-day sun, these were purely record shots), and research.

Oh yes, as for the "Home on the Range" marker, it ends up that the author of the song had written the song in Kansas, then moved to Oklahoma, where he died before he could see the song gain the popularity and prominence it now enjoys. He never saw any royalties, and never knew its popularity. But maybe one of the W.O.W. members passed it on to him in the afterlife!
Mike Broderick
Oklahoma City, OK, USA

It is nice to find out about these obscure bits of American history. Though they may not seem to be important to many or maybe some of us, they are all a part of the puzzle that helped to make this country. Pretty elaborate those grave markers too. You don't see to many so artisticly desgined anymore or so it seems.

If I recall correctly, while living in Arkansas several years back, there was an insurance company there called "Modern Woodsman." I wonder if that has any connection to or an affiliation with WOW?

I rarely frequent cemetaries, though I have often entertained the idea. Especailly the old ones with lichen encrusted stone markers. Interesting read there Mike, well done.