Pedipalp and body of Steatoda grossa

Pedipalp and body of Steatoda grossa

As I mentioned at https://www.photomacrography.net/forum/ ... hp?t=42860 , several weeks ago an unfamiliar spider appeared on the floor of my kitchen.

At first I thought from general appearance that it might be a ground spider (Gnaphosidae), but this beast had nothing like the high speed sprint capability that I've seen before in ground spiders. In fact this one was very simple to trap into a small plastic container. 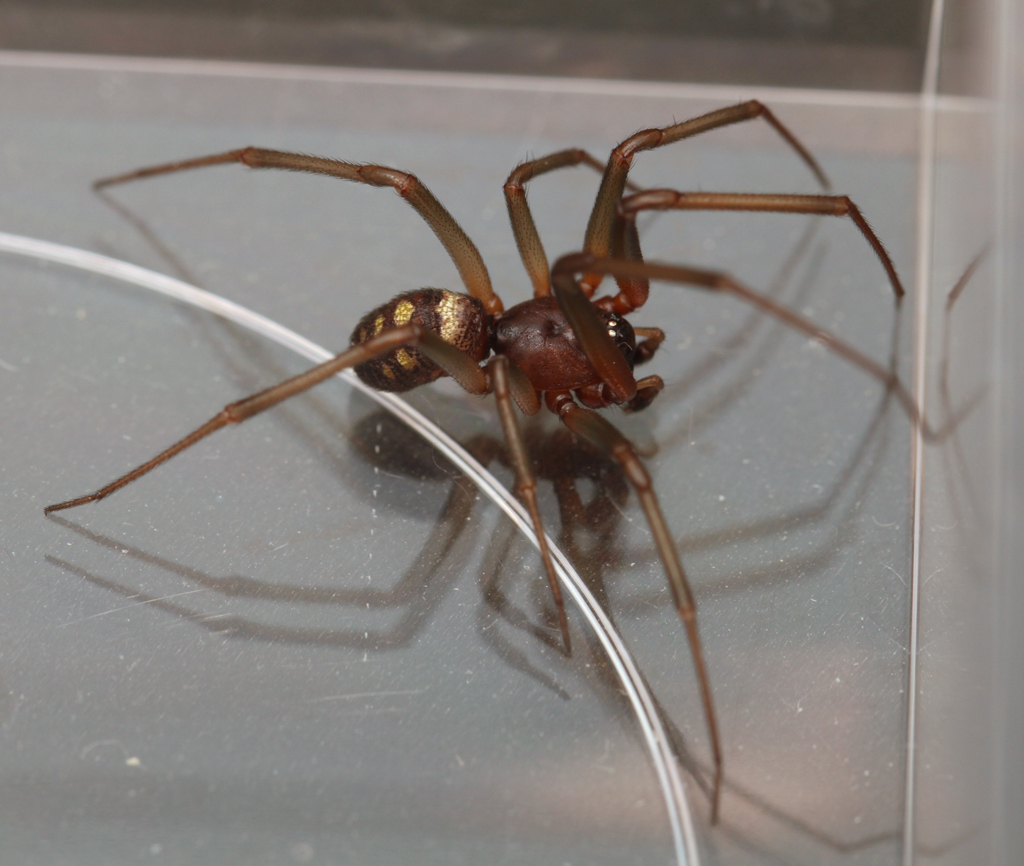 Once I could get a closer look at it, I checked the arrangement of eyes, and sure enough it was not Gnaphosidae.

So then I pulled out my trusty old copy of "Spiders and Their Kin" (Levi & Levi). I have the original 1968 version. I see that it's been updated, 2002, but from Google's page images, it looks like the revision is limited to correcting some numbers and typos. The table of contents appears identical, right down to the page numbers. I think I'll skip the update. Anyway...

The arrangement of eyes -- two on each side near the centerline, well separated front/back so roughly forming a square, and two other eyes farther out, touching each other -- suggested something in the "cobweb weavers". You can see in the photos that some of the eyes are strongly retroreflective. I do not know whether all the eyes are, at the proper angles, or if it's just some of them. Other photos suggest that it's mostly the two at center back. 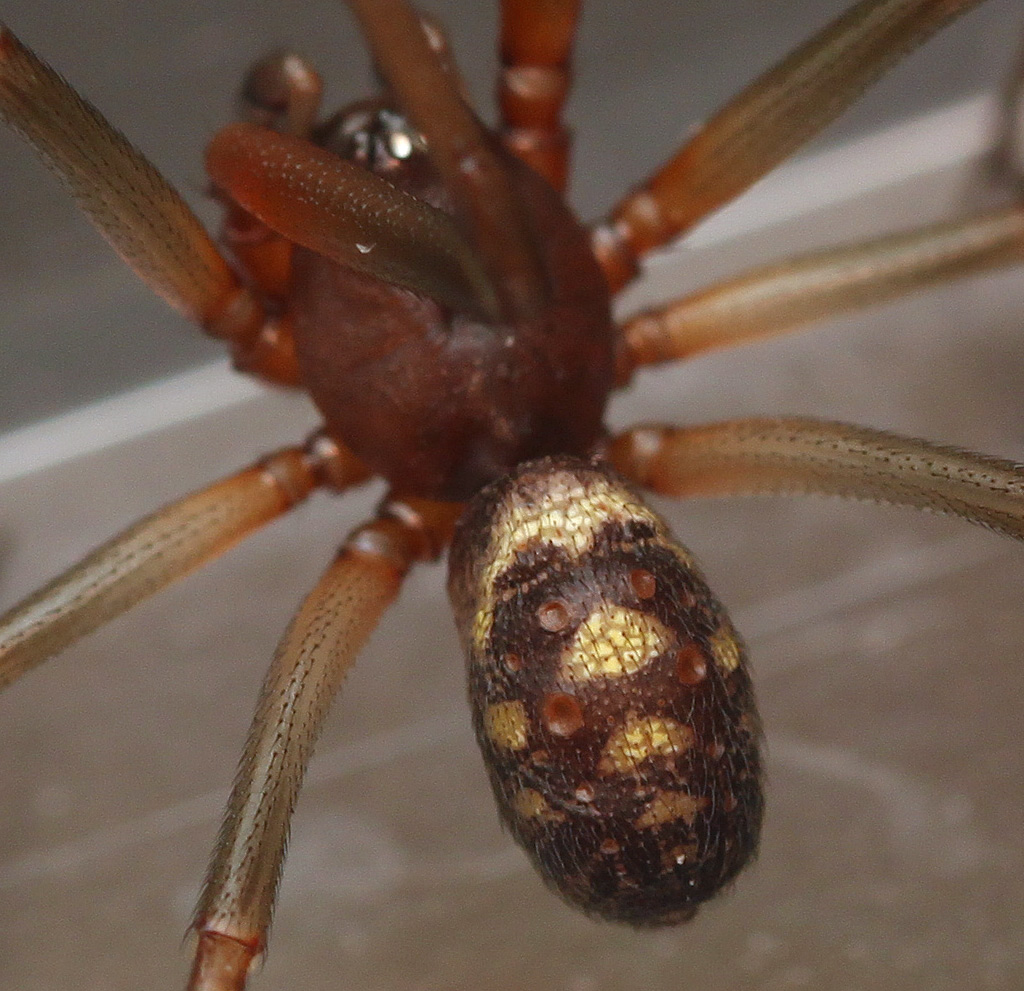 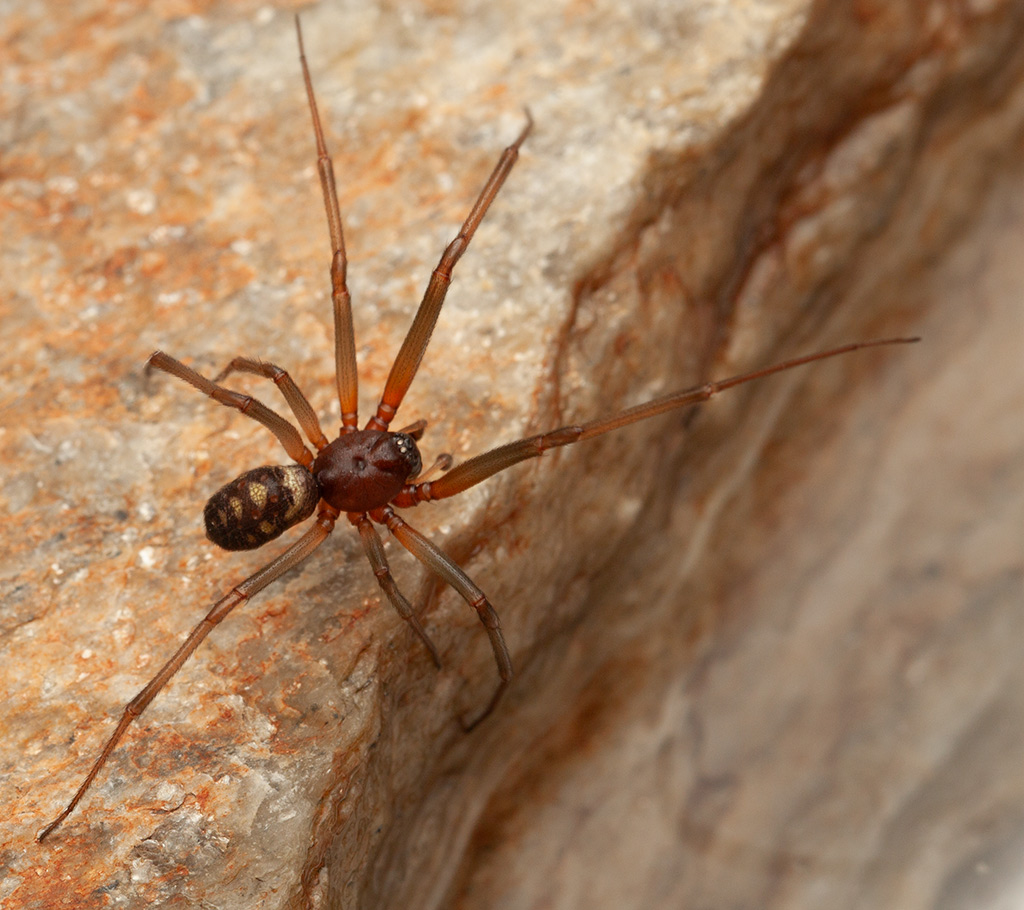 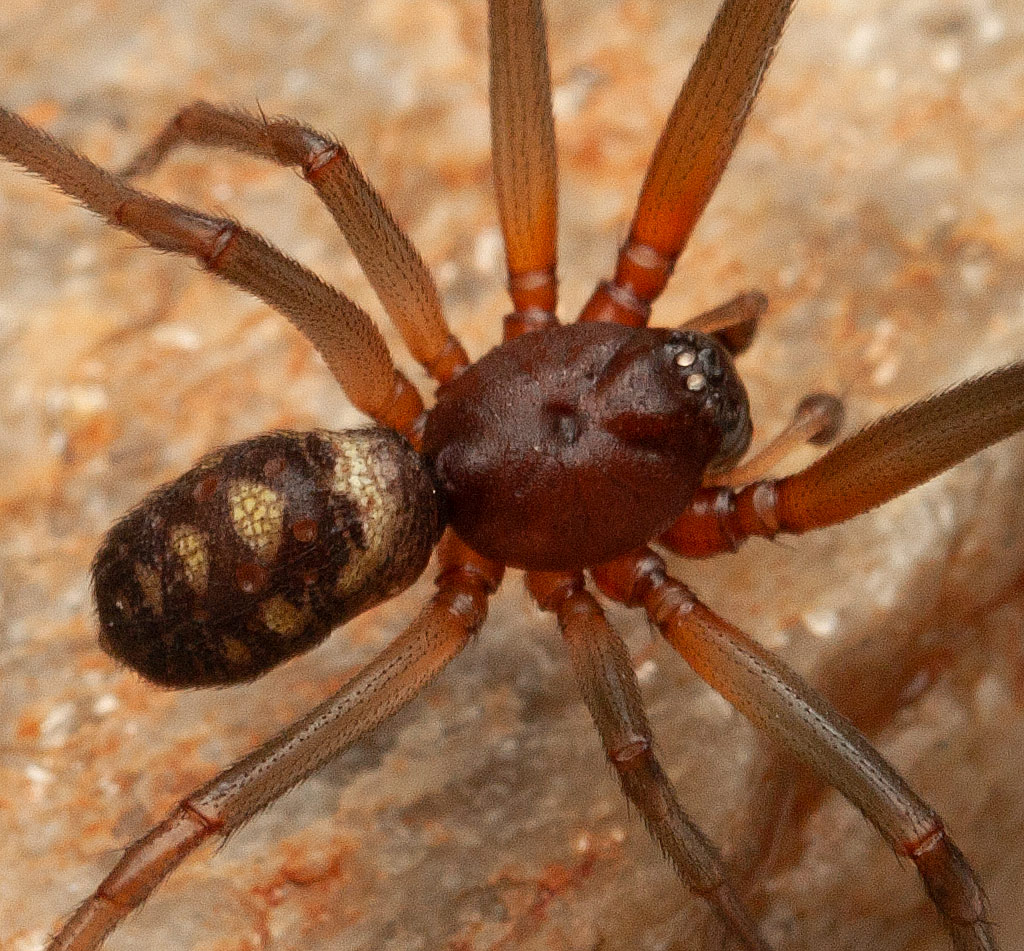 But I couldn't find anything in Spiders and Their Kin that looked even close, in general appearance.

So then I switched gears and started looking for illustrated guides of spiders of Washington, hoping I might get lucky. It worked! Someplace in my search -- I've lost the exact reference -- I ran across a picture that looked close enough to put me on the right track.

It turns out that this is Steatoda grossa. Wikipedia has a page on it, https://en.wikipedia.org/wiki/Steatoda_grossa .

My difficulty with ID was that this species, like many spiders, is strongly dimorphic. The females look similar to black widows, hence one of the common names, "False Black Widow". But the males look totally different in body shape, coloration, surface texture, you name it. The species is shown in Spiders and Their Kin, but it's a female they show, and I had a male.

Once I had a good tip about the ID, then for confirmation I went looking at the pedipalps.

Here is a stereo pair of the left pedipalp, after the subject had passed on (of natural causes...) and been arranged and dried. 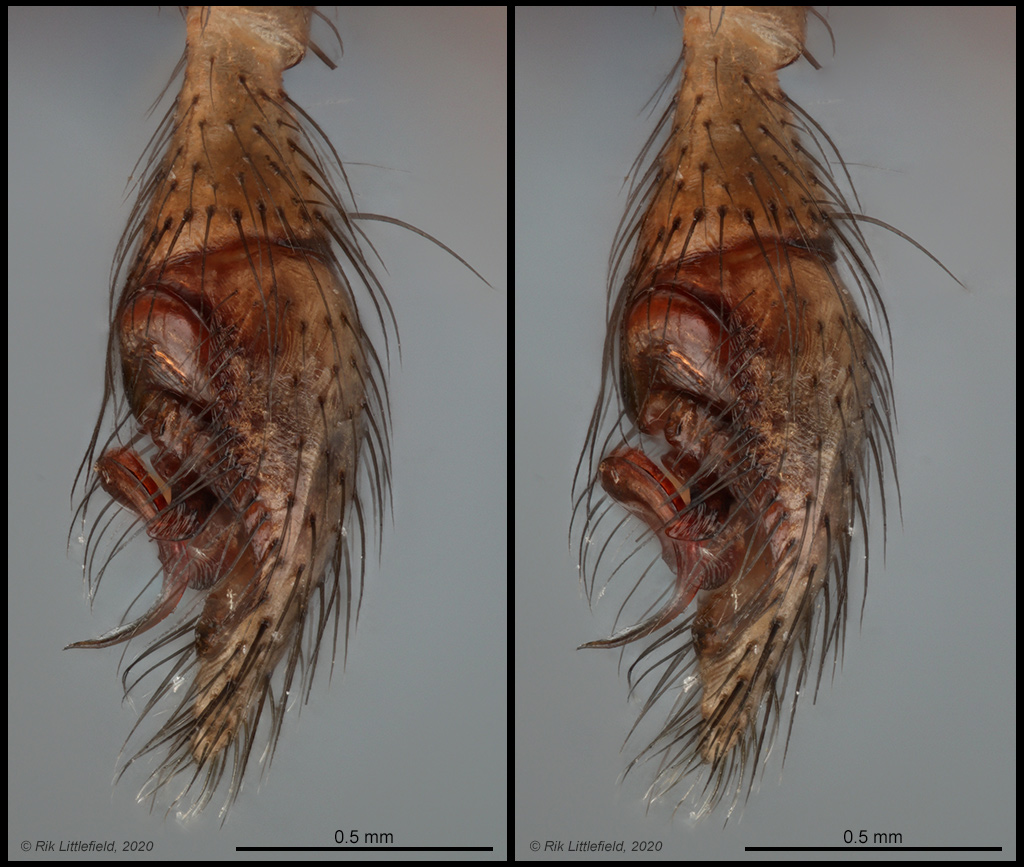 If you're an aficionado of pedipalps, then I'll warn you that this one has probably been damaged by cleaning. Comparing against the SEM image at http://www.spiders.jeremypoolesem.org.u ... Grossa.htm , I notice that one part of the structure near the tip is missing here. In cleaning the specimen before photographing it, I removed what appeared to be a large piece of debris caught in the bristles. But in retrospect, I'm now thinking that was some dried membrane. Probably I should have looked at both palps before cleaning the one. Anyway, you've been warned.

One foot of this beast is shown at high magnification in a companion thread, viewtopic.php?f=27&t=42860 .

Re: Pedipalp and body of Steatoda grossa

That is very good! I wouldn't have known what it was, except possibly a male "house spider" of some sort. But that common name is pretty broad.
No idea what those depressions on the abdomen are for. There are dish-shaped sensilla in arthropods, but these seem extra big.
Pedipalps are ... complicated. That spiral part especially.
Mark Sturtevant
Dept. of Still Waters
Top
Post Reply Previous topicNext topic
2 posts • Page 1 of 1