3-clawed foot of a cobweb spider

3-clawed foot of a cobweb spider

Several weeks ago an unfamiliar spider appeared on the floor of my kitchen. It turned out to be a wandering adult male Steatoda grossa, https://en.wikipedia.org/wiki/Steatoda_grossa . Identifying the beast took a bit of struggle, which I have now described at https://www.photomacrography.net/forum/ ... hp?t=42867. For here, let's just say that I spent quite a bit of time looking at the beast under a stereo microscope, where I got curious about the structure and function of the feet.

This species normally lives in a loose web, and like other web-forming spiders, it has feet that are specialized to match. So, unlike jumping spiders which have relatively huge feet with two claws and a bunch of tufted hairs that stick to surfaces (viewtopic.php?t=725, viewtopic.php?t=835), the web-forming spiders have small feet with no tufted hairs but three claws and some serrated bristles that are specialized for working with strands of silk. 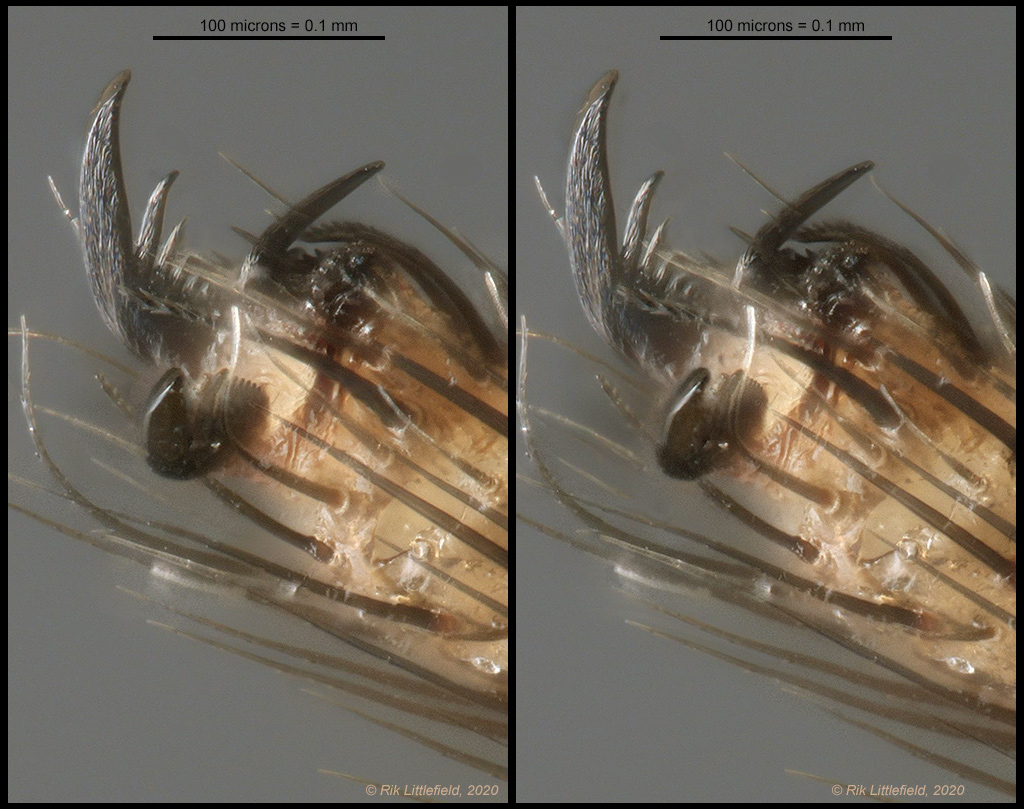 This same view, overlaid by an image of the corresponding silk, can be seen at https://www.photomacrography.net/forum/ ... hp?t=42887 (second image in that posting).

Now, here is the explanation provided in "Biology of Spiders", Rainer F. Foelix -- a wonderful book, highly recommended. This is from Second Edition, page 18:

Tarsal Claws
The tip of the tarsus bears two bent claws, which are generally serrated like a comb (Figs 17, 18). Some spiders (Trionycha) have an additional middle claw. All claws arise from a single cuticular platelet. They can be lifted or lowered as a unit by the action of two antagonistic muscles, the musculus levator praetarsi and the musculus depressor praetarsi (Fig.24). The middle claw is quite important for web spiders, because they use it to catch hold of the silk threads of their webs -- in fact, only the middle hook and hot the large main claws grasps the thread. The thread is pushed by the middle claw against serrated bristles situated opposite the claws (Fig. 18b). There it is held, snagged in the little notches of these bristles. To release the thread, the middle claw is lifted by the musculus levator praetarsi; the inherent elasticity of the thread simply causes it to spring back out of the clasp of the claw (Wilson, 1962b). 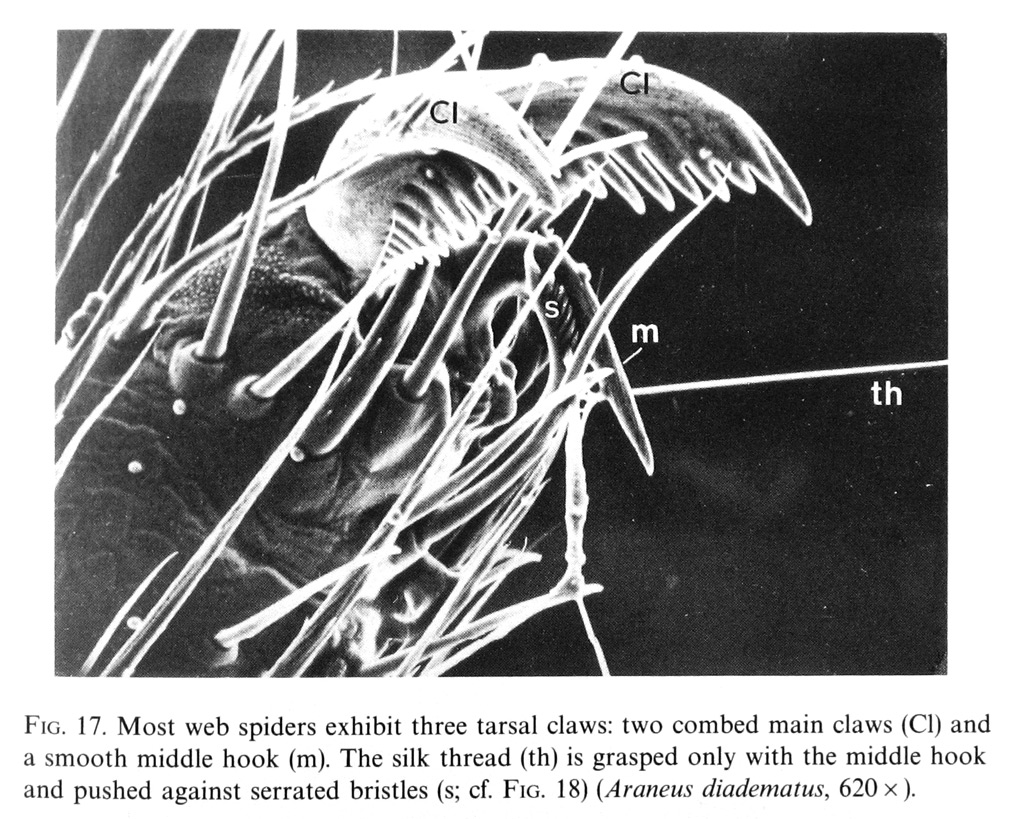 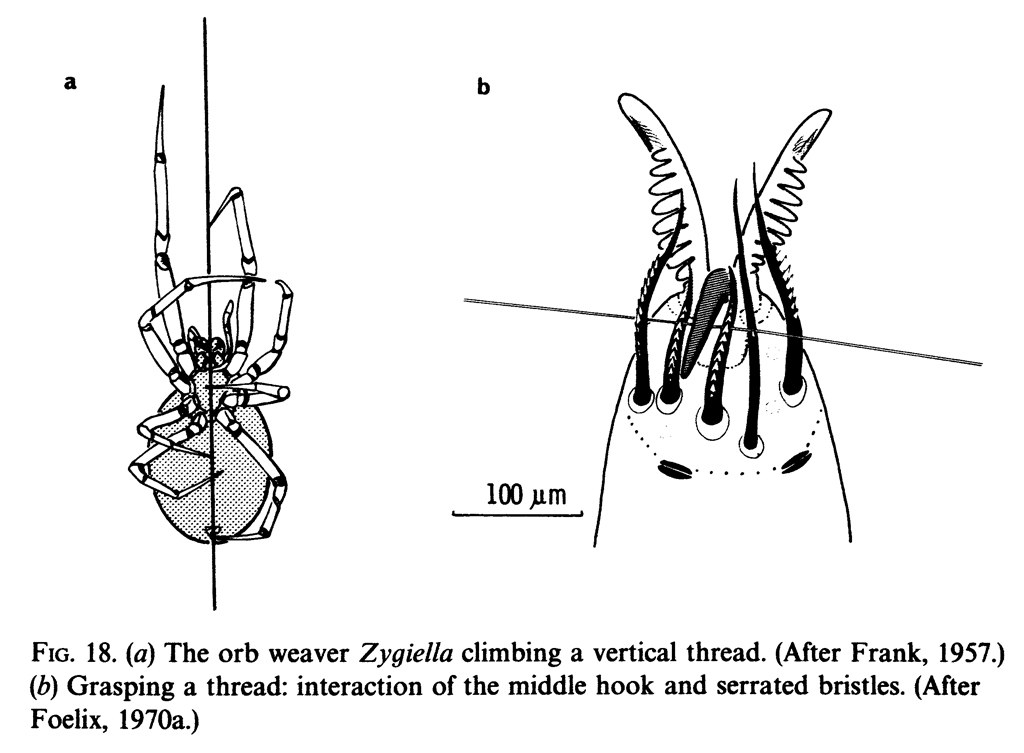 The stereo view includes a scale bar, but often those bars don't give me a very good intuitive understanding of how small a thing I'm looking at. So as an alternative, here is a zoom-in sequence, shot with an ordinary macro lens:

Showing the entire spider and a U.S. Lincoln-head penny. 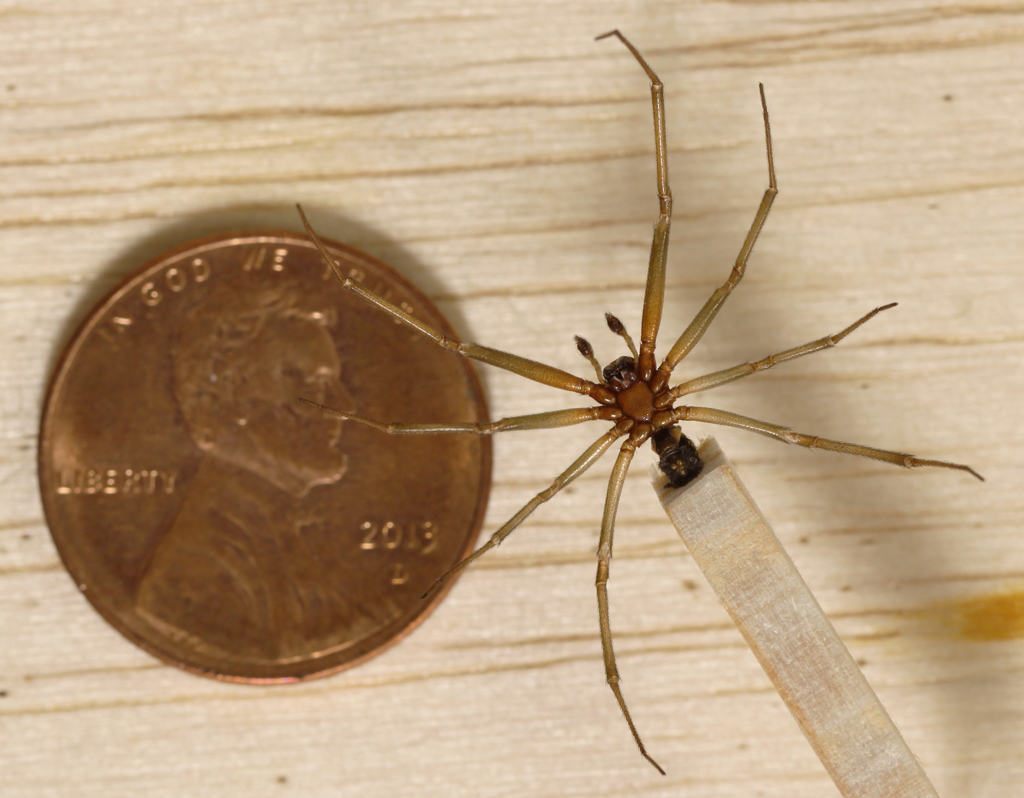 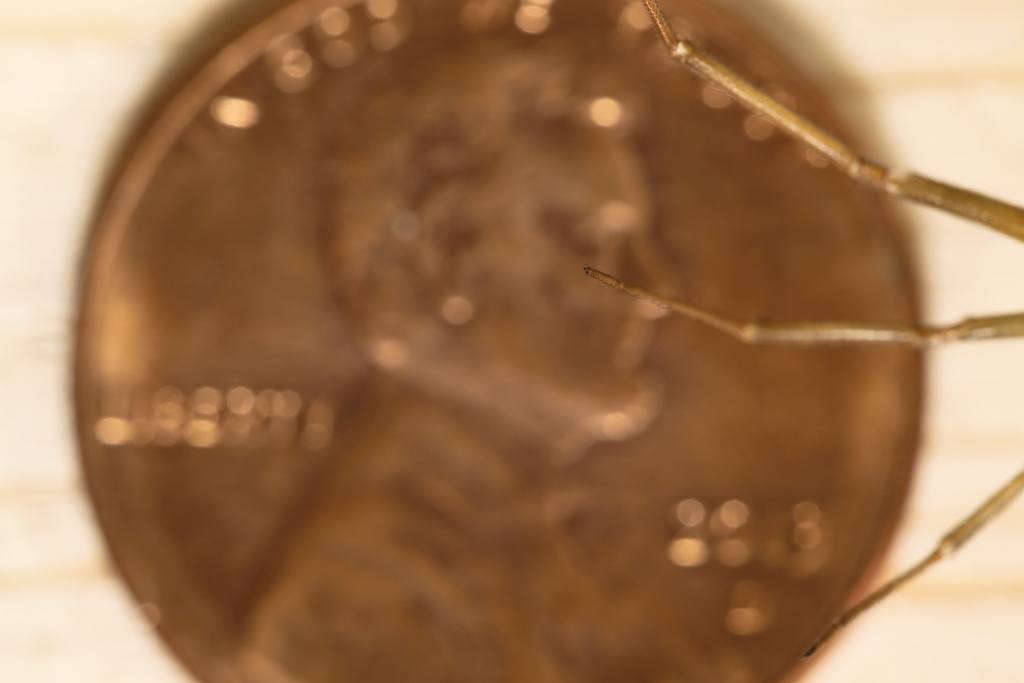 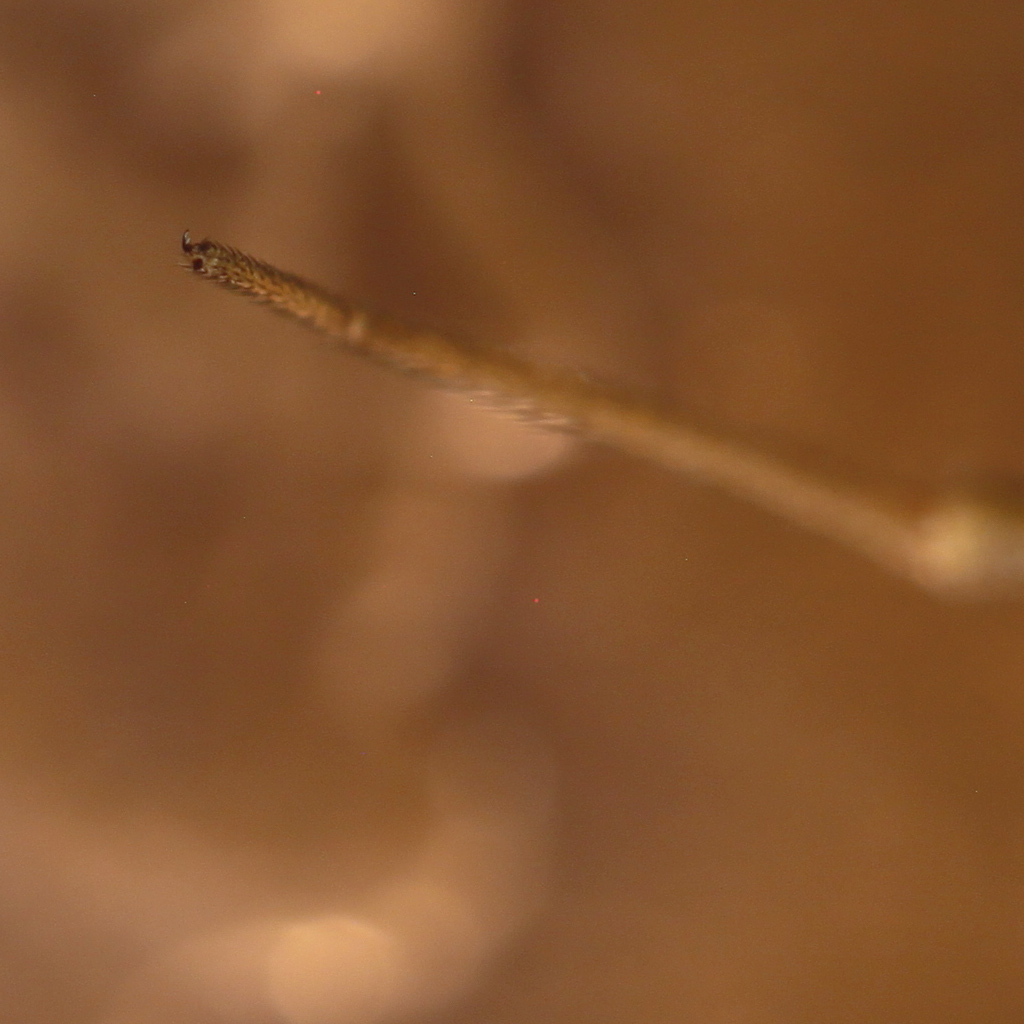 Cropped farther and blown up to 400 pct. 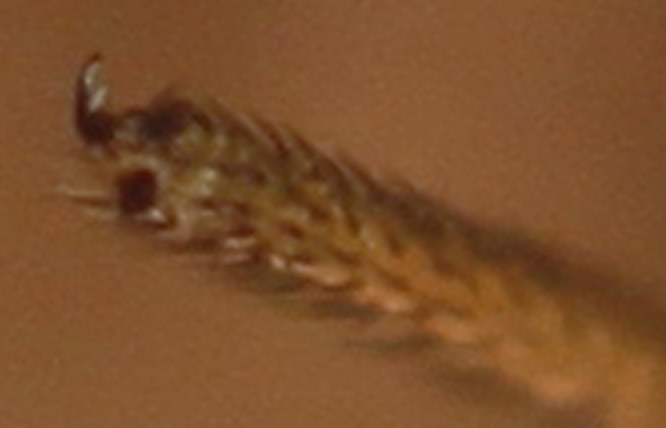 Again, the stereo pair that we started with.

If you run the numbers carefully, you'll see that the stereo views are cropped to only about 20% of the image width as originally shot. So why did I not use a higher power objective, say 50X, and get higher resolution? The answer to that question is that I did not want to alter the specimen, and to get the angle that I wanted, 20X Mitutoyo with 20 mm working distance was the highest power that I could reach with. It might be interesting to try again sometime with my Nikon 40X NA 0.80 M Plan apochromat. But that would require either remounting or taking apart the specimen, and the whole affair would be a lot of trouble for modest gain. Most likely I'll find some better way to spend my time.

Edit: added links to companion thread about the ID and the silk overlay image.
Top

An elegant presentation, focusing attention variously on the joys available to those with curious minds, the boggling power of the evolutionary process, the effectiveness of images in clarifying a process, and the rational limitation of investigation of single subjects. Nice pictures, too. Thanks!

Very well done! One can easily become amazed at the deftness by which spiders maneuver on their webs. One should never tire watching one secure their prey, wrapping it in sheets of silk while twirling it. The tensile strength of web is impressive, suspending both spider and prey, but then the spider will quickly cut the prey loose with a casual touch of one of its feet. Amazing how they just do that when they want, and not when they don't want.
Mark Sturtevant
Dept. of Still Waters
Top
Post Reply Previous topicNext topic
4 posts • Page 1 of 1