A few weeks ago I went for a bike ride on one of the last good days of fall. I was passing a vacant lot when I noticed some black lumps crossing the road.

Some of the lumps were black widow spiders, which I decided were not interesting. 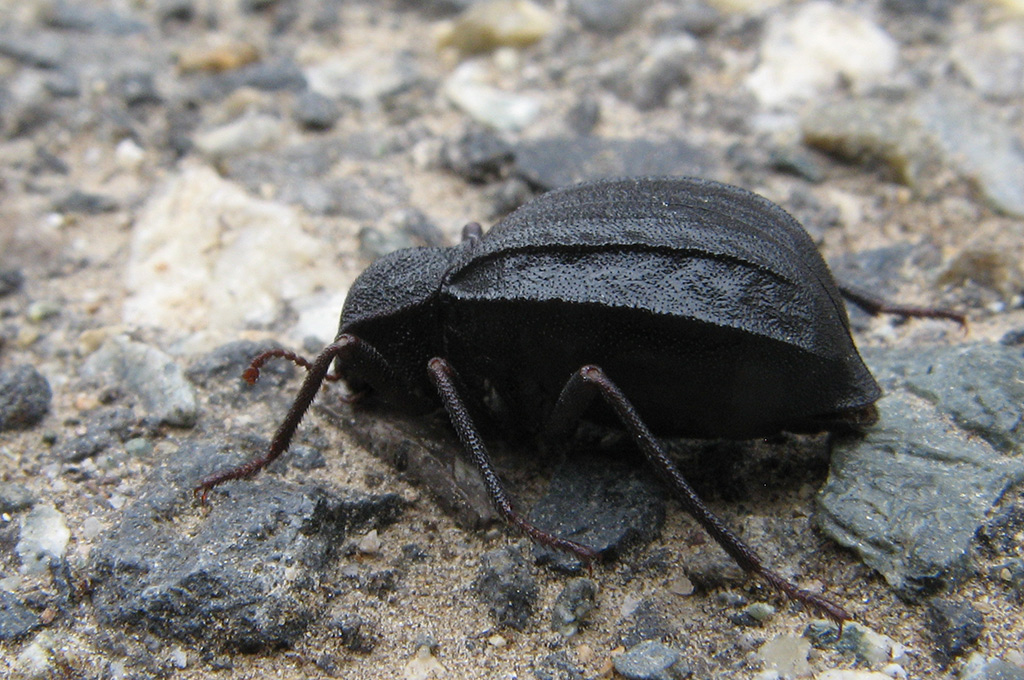 The beetles did not look particularly interesting either, but I collected a few specimens to look at later, just in case.

They turned out to be more interesting than I had guessed.

Here is the reason why: (crossed-eye stereo pair)

Putting things in context, here is what you're looking at. This is the tail end of the beetle. The rectangle marks an area that is shown larger below, and the smallest inner line shows the area that is focused in the stereo pair above. 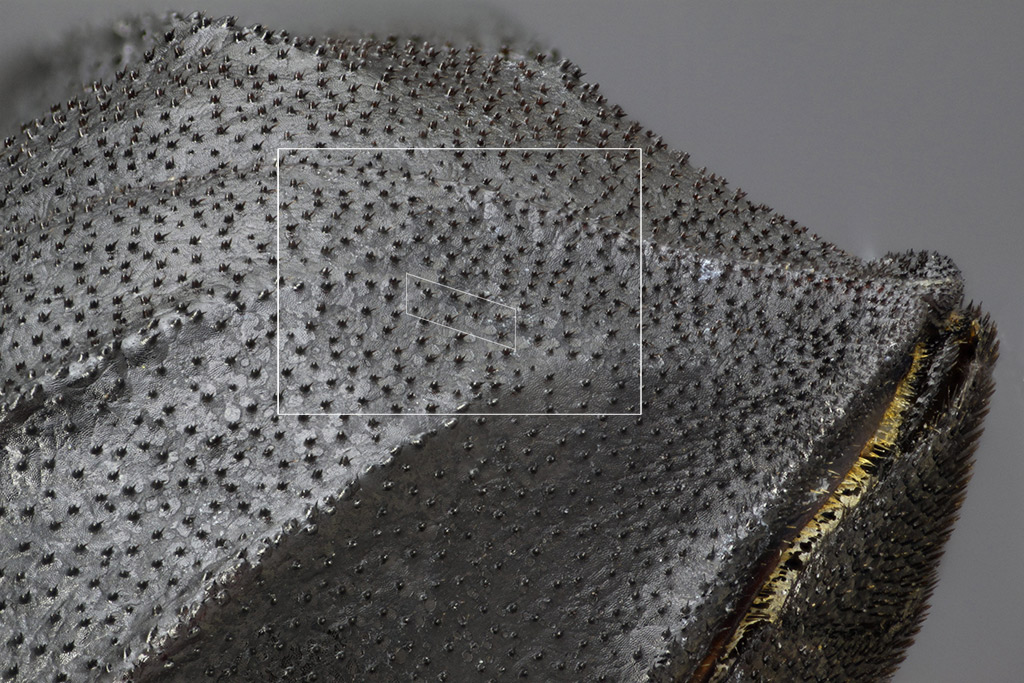 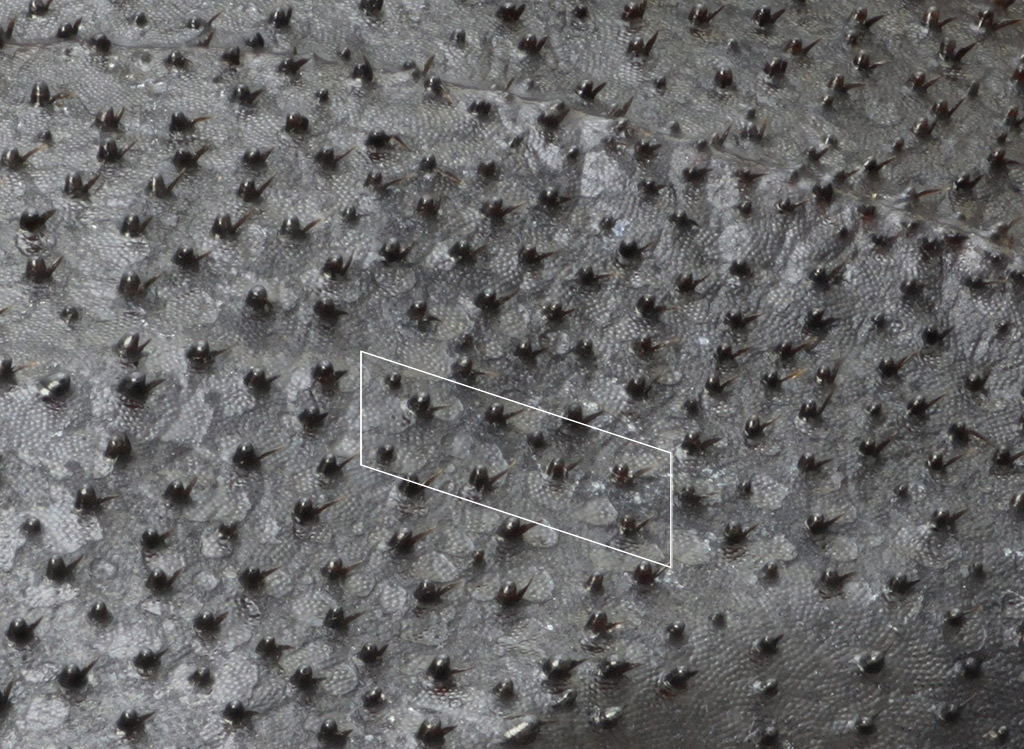 Here again is the extreme closeup, even larger this time: 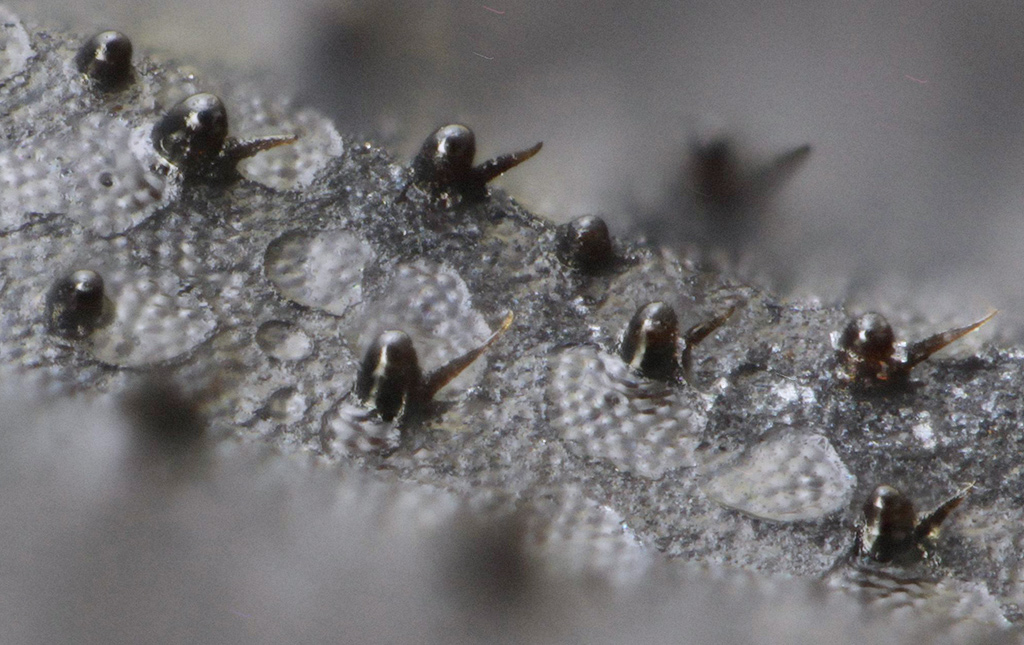 I do not recall ever having seen this sort of bump-and-spine structure, but on the other hand I've never before looked this close at any darkling beetle.

It was not much trouble to track down an ID to species level. This is Philolithus densicollis.

I am especially confident about ID this time, because one of the resources that turned up in my search was a 1978 US Government report titled "Darkling beetle populations (Tenebrionidae) of the Hanford site in southcentral Washington" [HERE]. The site does not quite touch my house, but its border is within easy walking distance. Quoting from the report's summary:

This 3-yr study documents the taxonomic composition, relative abundance, and seasonal distribution of darkling beetles occupying the Hanford Site in southcentral Washington. A taxonomic key and species diagnosis are provided to assist in identification by the nonspecialist. Analysis of food plant availability and selection serves to identify transfer pathways through beetle populations and permits construction of food web diagrams depicting the flow of materials through the darkling beetle component.

Those of you who are interested in methods of investigation might enjoy reading those portions of the report that describe how they figured out what the beetles were eating. Short version: they trapped a lot of beetles, dissected out the digestive tracts, and compared the contents against a reference collection "of all plant species known to occur within study areas ... dried, partially ground (1mm screen size), and mounted on a glass slide". It looks like the samples and reference library were prepared at Hanford, then all the slides sent to a group at Colorado State University for interpretation and data entry. (This was 1978, so data entry was by keypunch. The Fortran program they used to summarize the data is listed in an appendix.)

A total of 38 different food items was taken by this beetle (Table 5.21), indicating that this is an omnivorous species. Western tansymustard (D. pinnata) (17%), cryptogams (17%), winterfat (E. lanata (9%), big sagebrush (A. tridentata) (9%), and greasewood (S. vermiculatus) (7%), were the most frequently consumed food items.

Further information about the beetle is easily found by searching. Most of the pictures on BugGuide were shot within 20 miles of my location, at the same time of year.

The elytra photographs were shot with 5X and 20X Mitutoyo M Plan Apo objectives, paired with a Raynox DCR-150 tube lens to give 5.2X and 20.8X magnification onto a Canon T1i sensor (22.3mm x 14.9mm).
Illumination is through a cylinder of tracing paper, around which two LED flashlights were carefully placed to get modeling that clearly showed the bumps and spines. The whole-body picture is posed using a different specimen, shot with a Canon A710 compact camera on an overcast day.

Very interesting.
Thanks for sharing.
Top

Lovely photos and an interesting subject.

Any speculation as to what biological role the bump-and-spine structures have? Defence would seem the obvious starting point for anything spiky but they seem relatively small.
Top

Those are strange. Of course anti-predation defense comes to mind, but I think beetles in this family have a pretty serious chemical defense, and the spines would be more effective if they faced forward, I guess.
There are desert beetles in this family with a finely bumpy surface which allows them to collect water vapor on their shells which they then drink. Here is a bit on that, although it is not as good as I'd like:
https://www.youtube.com/watch?v=XsMJNNshPOs
Mark Sturtevant
Dept. of Still Waters
Top

Thanks for the comments, all!


Pitufo wrote: ↑
Wed Dec 09, 2020 1:24 am
Any speculation as to what biological role the bump-and-spine structures have?

I have no great ideas. Collecting water seems unlikely, given the local climate and terrains. I agree that the spikes look too short to be defensive. Bristles often have a sensory function, and I can vaguely imagine the bumps serving to protect the bristles/spines from mechanical damage. But still it's a structure that I have never seen before, and I've not been able to reach anybody who knows.

An unrelated aside: these are flightless beetles with sutured elytra. They are in the same family as the "diabolical ironclad beetle", recently famous for being tough enough to survive being run over by a car (HERE). But the Philolithus densicollis treated here is relatively fragile. I tried sectioning one to look at the form of the suture, but without embedding, it just broke to pieces.

I suspect that the spines are sensory organs. They aren't straight and are not pointed; they look like they are meant to be "wiggled"....but who knows.
Lou Jost
www.ecomingafoundation.wordpress.com
www.loujost.com
Top

I still have not found anybody who even claims to be sure what the function of the bump-and-spine structure is.

Water collection from dew is a common suggestion, but I see in a recent study that even the mechanisms for that are now in doubt. There's a paper at https://frontiersinzoology.biomedcentra ... -9994-7-23 that includes the following paragraph:

The mechanism by which fog water forms into large droplets on a beaded surface has been described from the study of the elytra of beetles from the genus Stenocara[10]. The structures behind this process are believed to be hydrophilic peaks surrounded by hydrophobic areas; water carried by the fog settles on the hydrophilic peaks of the smooth bumps on the elytra of the beetle and form fast-growing droplets that - once large enough to move against the wind - roll down towards the head. The application of this mechanism for water collection by fog-basking beetles has however been questioned [9]. Hamilton and co-authors do not challenge the mechanism presented for fog collection, but argue that the beetle studied to reveal this mechanism never actually actively collects fog water in nature. That fact that Hamilton and colleagues [9] also re-identify the model beetle in the study by Parker and Lawrence [10] as a Physasterna cribripes rather than a Stenocara sp. does not influence their main argument, as neither of these genera are represented among the few Darkling beetles so far known to actively collect water from fog [5]. A quick inspection of the two beetles that are well known to fog-bask - O. bicolor and O. unguicularis - reveals that the elytra of these beetle do not carry the numerous bumps that were described as part of the water collecting mechanism in Stenocara (or possibly Physasterna), but rather have smooth elytra surfaces with regular grooves.

Offered to me in personal communication by a beetle guy at Oregon State, "another possibility is ‘reduced friction’— as squeezing through a solid surface (soil, wood, bark)… these could protect the beetle while reducing friction?"

I can also imagine that the bumps serve to protect the spines from damage, while still allowing them to reach out and feel the environment. Lots of mysteries!

Interesting series, particularly when pared with two similar species of darkening beetle from the Hanford area.

As both species have rounded bumps with the spines on the posterior side of the bumps, I wonder if they are like a mechanical ratchet of sorts that prevent/restrict the beetle from backing up when confined underground. The rounded bump would protect the spine to some degree. The spine might encourage any wiggeling in tight spaces to produce forward motion as opposed to dithering back and forth. It would catch and restrict backword motion. Or perhaps not. It would be interesting to drag a fabric swatch across the back of a specimen and determine if the spine/bump arrangement actually do function as a mechanical ratchet.

I still think this is a sensory structure. I think the "spine" is the sensor, and the "bump" protects the delicate spine as the beetle moves forward through leaf litter.
Lou Jost
www.ecomingafoundation.wordpress.com
www.loujost.com
Top
Post Reply Previous topicNext topic
9 posts • Page 1 of 1