This is one of the Blister Beetles, family Meloidae, species Lytta vulnerata based on the date, habit, and black-colored legs. (All the other Lytta's that look similar have reddish brown legs.) There's a good discussion of this species at https://beetlesinthebush.com/2011/10/12 ... a-cooperi/ .

I first encountered this species on a bike ride, in the form of a roadkill corpse. What was left looked maybe interesting enough to take home and put under a stereo scope, so I did that. It turned out that "interesting" was a bit of an understatement, so I went back and collected some fresh specimens, which turned out to be even more interesting.

Here's the first thing that caught my attention: compound claws. 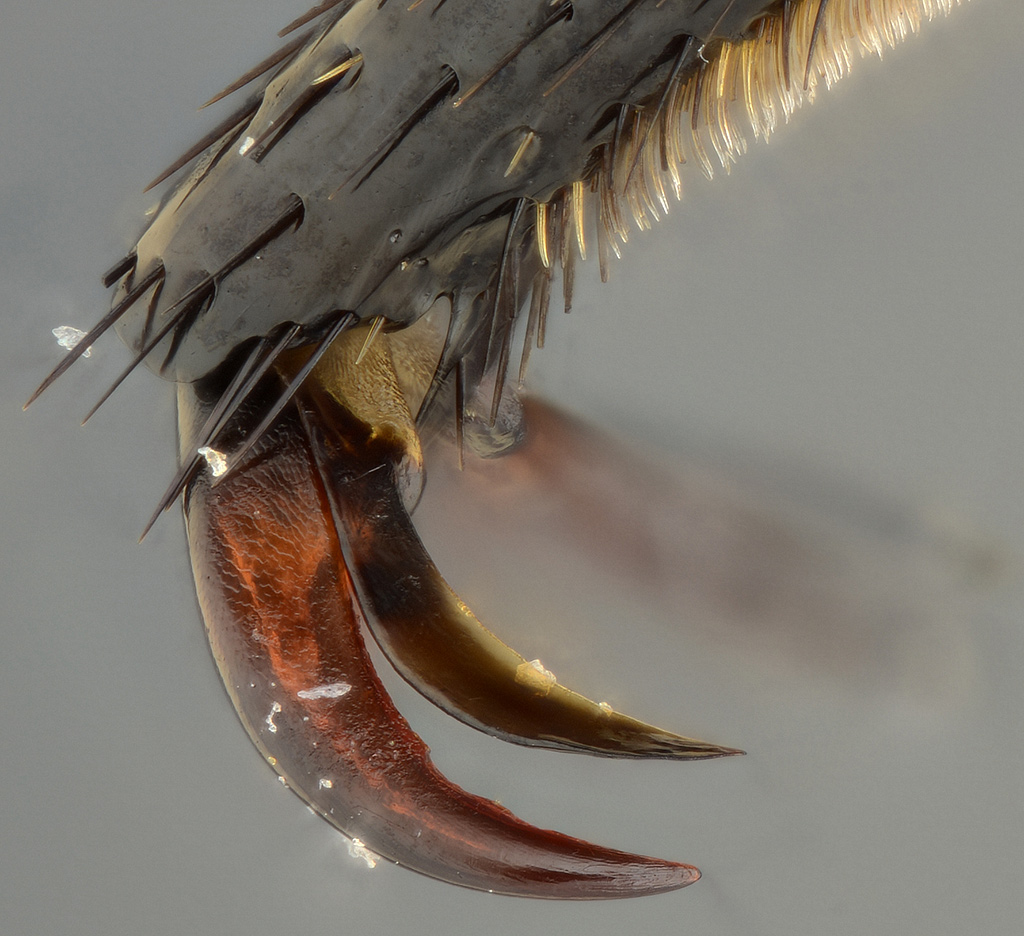 Each foot has two ordinary claws. Then on the outside of each ordinary claw, there's an auxiliary structure that seems to be called a "blade". To my eye, looking at the live specimens that I collected later, the blades appear to be independently actuated. I have no idea what they use the blades for.

For people who can see stereo, here's the everything-in-focus version. 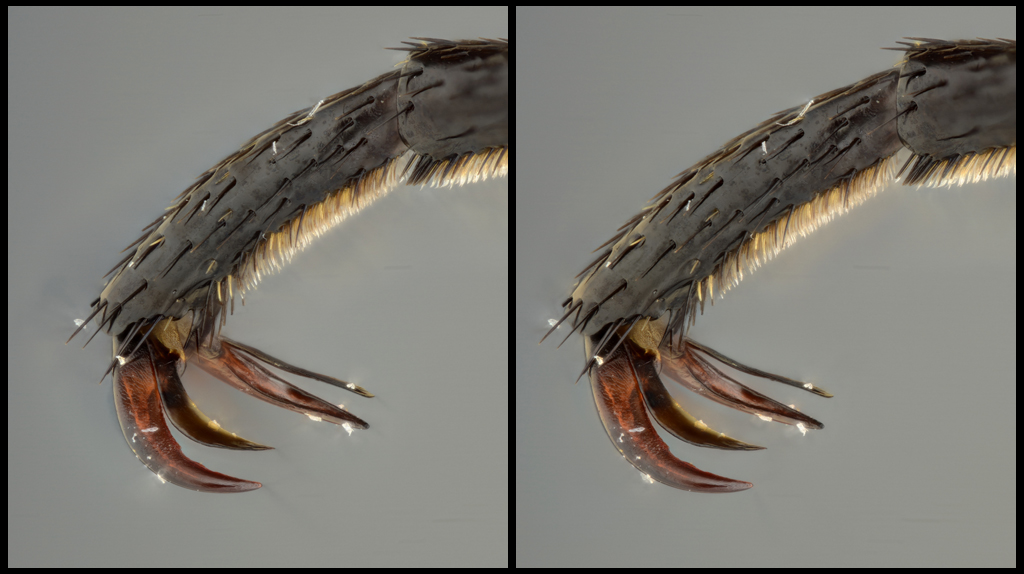 One peculiarity of the everything-in-focus version is that if you look at it not in stereo, it's very easy to misinterpret the structure. At least I get it wrong. Instead of seeing front/front/back/back with only slight separation between claw and blade, I see front/back/front/back with big things in the front and little things in the back, and large separation in both cases. The same thing happens when I look at Figure 1 of https://aces.nmsu.edu/pubs/_circulars/C ... lcome.html .

Next up, we have what look here like donkey ears. What they actually are is tibial spurs, at the joint between tibia and tarsus. In most of the other critters I see, such spurs are pointed like bristles. Why these things have this thickened and flattened structure, I have no idea. 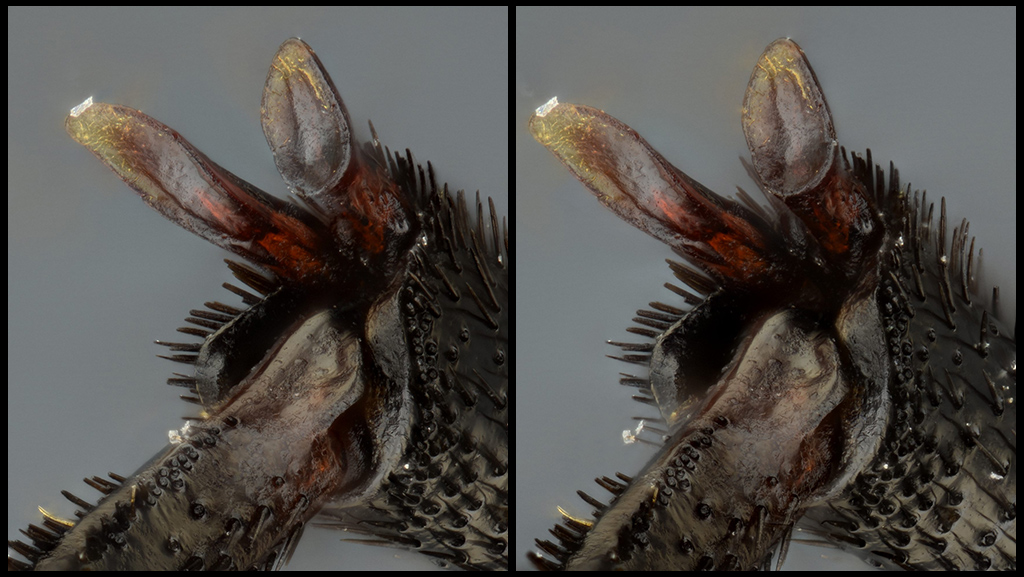 Finally, we have what must be the most frightening male copulatory organ that I personally have ever seen. 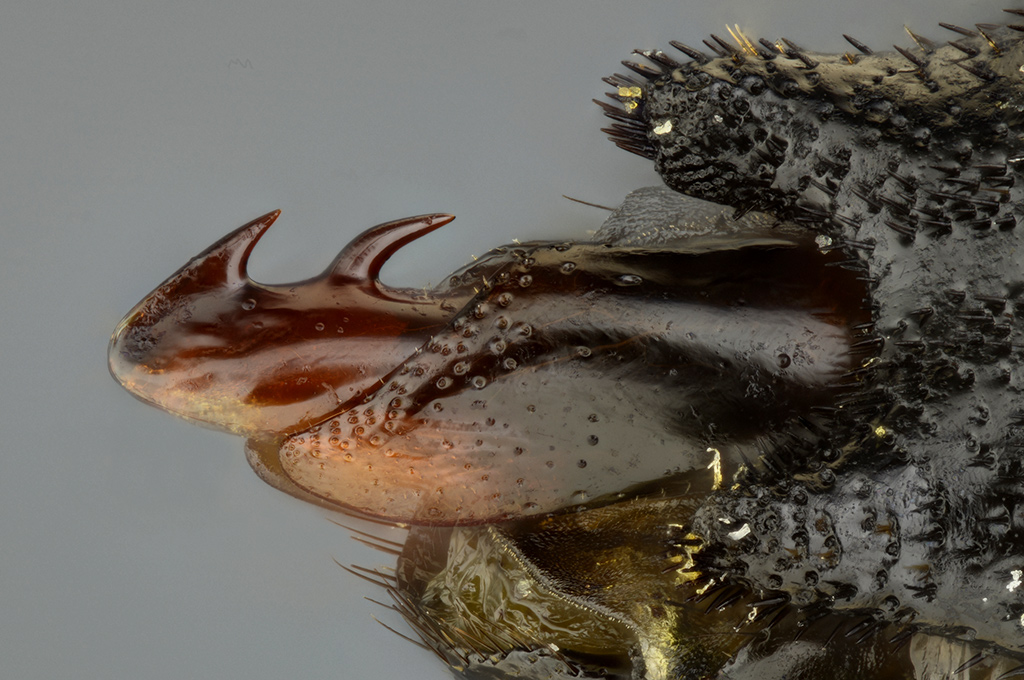 If anybody has knowledge of how this anatomy functions, I would be very interested to hear!

Stereo pairs are uniformly plus and minus 5 degrees off axis, with percentage shifts computed using the stereo calculator that is now included in Zerene Stacker (in beta build only, at this moment).

What interesting anatomy and good pictures!
the stereos are excellent, the first and third in special


...what must be the most frightening male copulatory organ that I personally have ever seen

...what must be the most frightening male copulatory organ that I personally have ever seen

I am used to seeing copulatory organs, like butterfly claspers and spider pedipalps, that are often complex but don't strike me as threatening.

On the other hand, a quick search on male beetle genitalia anatomy turns up a number of high-ranking hits that seem relevant, for example an article by National Geographic titled "Horrific beetle sex – why the most successful males have the spikiest penises". But I'm struggling to see how the bold hooks on this Lytta would play some role anything like the bottlebrush spikes shown in the article.

So beautiful and creepy at the same time

Thanks for the kind words! And dolphine, welcome aboard!

Very interesting! So each tarsal claw has an accessory 'blade'. From what I have seen, the beetles spend time on flowers, and they eat pollen. So maybe the claws are involved in foraging in pollen.
Insect penises often have various tools used to remove sperm from rival males. I expect their form is one that works well within the female reproductive tract, and those will differ with different species.
Mark Sturtevant
Dept. of Still Waters
Top
Post Reply Previous topicNext topic
7 posts • Page 1 of 1