Sometimes I struggle with getting the right colors from my macro work. I know that there are a number of products available, such as the x-rite color checker, that allow you to create an accurate color profile for the scene being imaged. But how could I use something like that for my macro work? Well, I found an answer, albeit an expensive one (isn't that usually the case?). 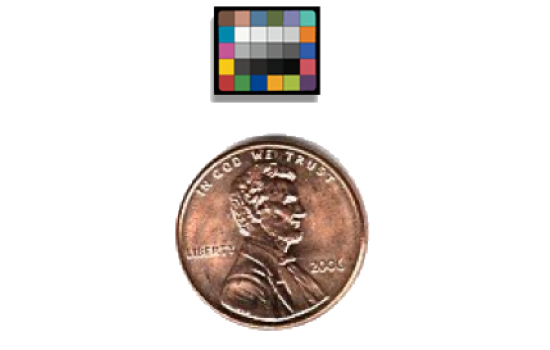 Davids wrote:Sometimes I struggle with getting the right colors from my macro work. I know that there are a number of products available, such as the x-rite color checker, that allow you to create an accurate color profile for the scene being imaged. But how could I use something like that for my macro work? Well, I found an answer, albeit an expensive one (isn't that usually the case?).

Simply fabulous! I'm thinking about getting a Pico target. I love the calibration data in RGB.

Can anyone posit why the patch 7 R channel in sRGB is -49? It is the same for both gloss and neutral.
Top

I got mine for $35 AUD on a discount at a local camera store (digidirect).

The colour checker is obviously far more powerful and elaborate. Mine only allows me to get the accurate white balance.
My website
YouTube
Instagram for Microscopy
Top

The data are presented as an Excel spreadsheet, and in Excel, an easy way to make a number appear red is to enter is as negative. (No doubt this is due to the roots of spreadsheets--financial accounting--where things like losses are recorded in red ink, and things like profits in black ink.)

At any rate, by way of a trial, in Photoshop I created two test images: One in Adobe RGB (1998), the other in sRGB. For the Adobe image, I used RGB values as listed--64, 134, 65. The result was a color I'll call "teal," which nicely matches the square on the test subject's far left, one row down from the top. For the sRGB image, I used RGB values 49 (not "-49" which I think impossible), 135, 168. The result is a similar color, but a little bit "more gray"--exactly the sort of result I've seen for out-of-gamut colors improperly rendered in sRGB.

As for the price of these targets: I don't think it seems out of line when one considers the fully-loaded cost to produce. The targets seem to be hand-made, as precisely as possible, and in small quantities--a perfect recipe for "not possible to produce cheap." In producing items that don't benefit from economy of scale, a good rule of thumb is that the producer needs to sell at least at double his cost to produce, when cost includes materials, a fair wage for time expended in product development, production, marketing, bill-collecting and other business activities, and some price-in for risks taken. Considering all this, $140 (half of $280) strikes me as barely adequate--or even inadequate--to cover these costs. Given the possibility of low sales volume, I question whether the producer will derive enough income to keep this item on the market. If you want one before the producer gives up, I suggest you buy now.

I also don't think $280 is excessive for a photographer with a strong need for this product. Granted, most of us are not that photographer. But if one is being paid, among other things, for very careful color reproduction, and if this product delivers it well, $280 may be a trivial expense. For example, imagine photographing for a broker in the gem markets of India, taking pre-purchase photographs for potential buyers of big-ticket gems, who live on the other side of the world, and who are very particular about a gem's exact color. If this product makes the process significantly less fault-prone, would you scoff at the price?

In my own photography and involvement in wetland science, I've often been called upon to photograph core samples of soil by the hundreds, with the requirement to render soil color at various strata as exactly as possible. This to satisfy critical analysis by state and federal regulators who classify soil types, partly by color. My approach to this has been fivefold: Photograph the core samples in both in raw + jpeg (1) under light from a speedlight of known color temperature (2) with a white color reference included in the shot (3), and also included in the shot, the page in the Munsell Soil Color Book (4) that most closely matches the stratum of most importance. This set of photographs, plus the presence of the Munsell soil book, allows me to calibrate a monitor or print to match the soil reference book and soil samples very well.

Soil color can be an important determinant of historic wetland/upland status of land--an important point under U.S. law. In every case I've been involved in, our level of record-keeping, photographic and otherwise, has made our case solid. Since our Munsell Soil Color Book is part of this work I've known, and since Munsell is related to the color test target in this discussion; and since our Munsell material has placed us in the "good evidence" category, in investigations, and since our Munsell Soil Book resembles, in price, the target currently under question, I'm inclined to say, "Forget the price. Does this target serve a need you have?

Thanks for the info Chris. I think that the "out of gamut" explanation must be correct. Could it be that the image was shot using a wider gamut, and the calculated sRGB value was negative? Would this simply result in a "0" for R channel for that tile?

The advantage I see from the full-color array is the ability to evaluate lighting accuracy. I am imagining that I will see differences in colors due to variation in CRI. I'm very curious how this will allow me to evaluate the different cheap LEDs I have been using. I hope they are not too far off!

I went ahead and ordered a Pico target.
Top

Pardon my ignorance, but how would you use the target to create a profile within lightroom? For example, something like x-rite color checker has it's own Lightroom plugin that can recognize the target in an image and create a profile for that photograph.
I contacted x-rite and they said that their software is not compatible with these smaller targets.
Top

I have not studied this particular case.

However, any color that is in gamut for sRGB would have positive values for all components. Colors that are out of gamut would formally be represented by values that are either negative or more positive than the maximum allowed value.

In Cartesian terms, if you want to specify a point that is outside a [0,1] cube then you need to use some coordinates that are either negative or greater than 1.

This makes sense, but the sRGB values are invalid. I would still assume the value should be 0 in sRGB space. The color won't be the same as it is in the original LAB space, but that's just a symptom of sRGB's smaller gamut. This tells me that tile 7 cannot be properly imaged in sRGB space.
Top

This makes sense, but the sRGB values are invalid. I would still assume the value should be 0 in sRGB space.

That depends on the definition of "should".

I have now looked carefully at the webpage and the spreadsheet. My read is that Image Science Associates measured the spectral characteristics on a wide gamut high precision spectrometer, then computed corresponding values in each of the specified color spaces.

As it is written in the spreadsheet,

The RGB calculations for a given Color space condition were calculated from formulas at http://www.brucelindbloom.com
RGB values for other color spaces can be calculated by visiting the above URL.

As you say, one could certainly clip values so as to produce some different color that would be inside sRGB gamut. But exactly what color to produce might depend on the criteria for making the change. See the discussion at https://www.cambridgeincolour.com/tutor ... ersion.htm .

Personally I like the spreadsheet's approach. Yep, in sRGB that color is out of gamut because it would require R=-49.

I think the answer of how to photograph a colour target in macro depends on how often you'll want to do it. If you change your lighting setup frequently and want colour consistency ( to avoid the term 'right colour'), I have no tips for you. However, if you are always using the same setup, you won't need to make a camera profile often and then you can afford a little more work to keep the cost down.

In macro, the whole colour target doesn't fit in the frame. But you can take a photo of every colour patch and recreate the target in post. Since it's nearly always possible but for the greatest magnifications to aim for a crossing of four patches, it is not that much work.
--- felix filicis ---
Top
Post Reply Previous topicNext topic
10 posts • Page 1 of 1