Ferns festoon a tree trunk, and gather the precious little light which filters to the forest floor: 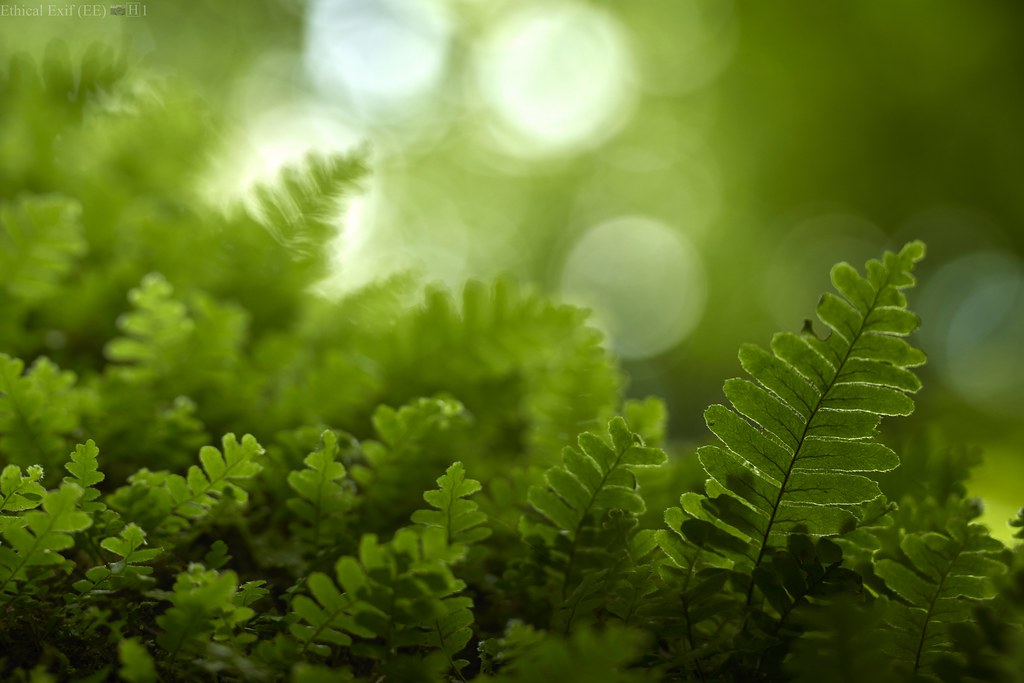 Most travellers to the tropics will have encountered the ubiquitous leafcutter ants, less common however, are the leafcutter bees (Megachilidae). Despite a convergence of behaviour, the bees use the leaves for an altogether different purpose, not to feed a fungus garden, but rather as nesting material for their eggs. 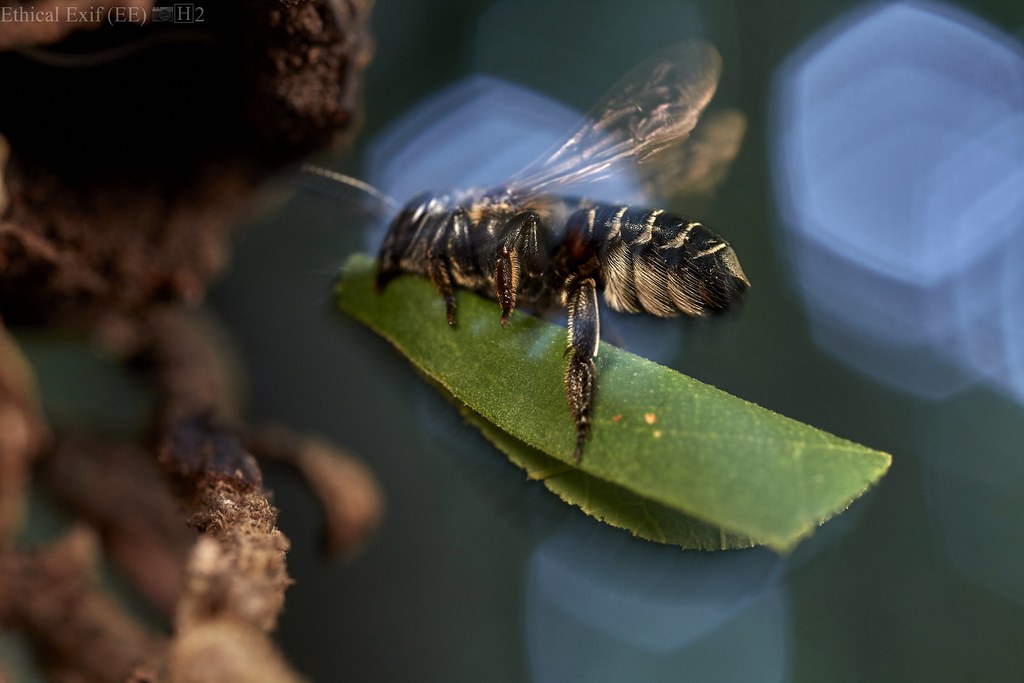 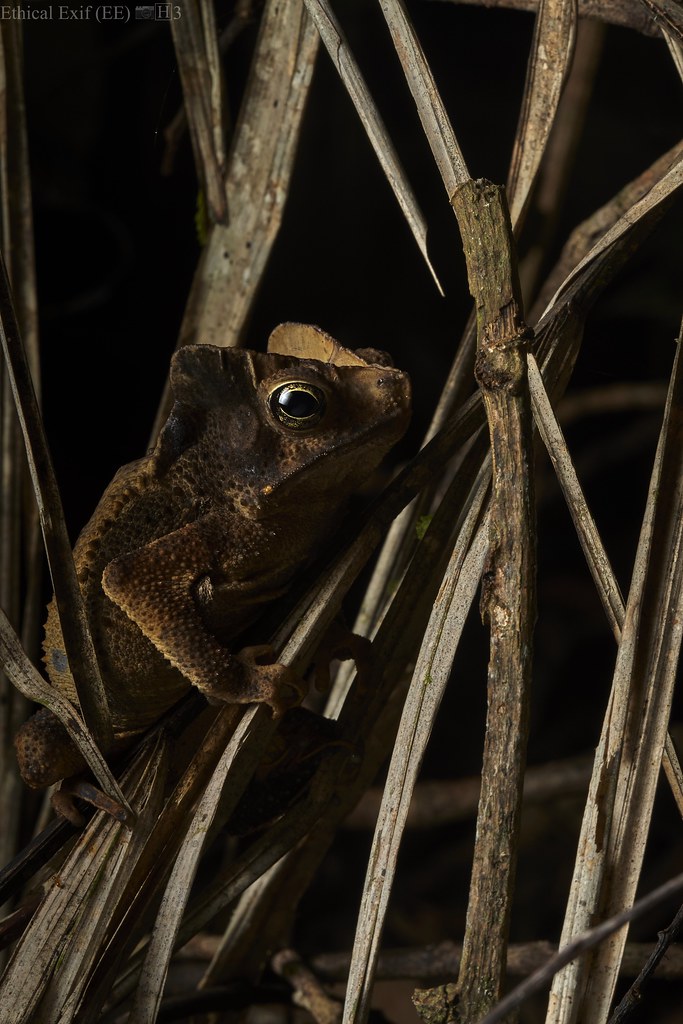 Leaf-mimicking katydid in B+W, faint horizontal shadow is the wings underneath the leaf-like casing: 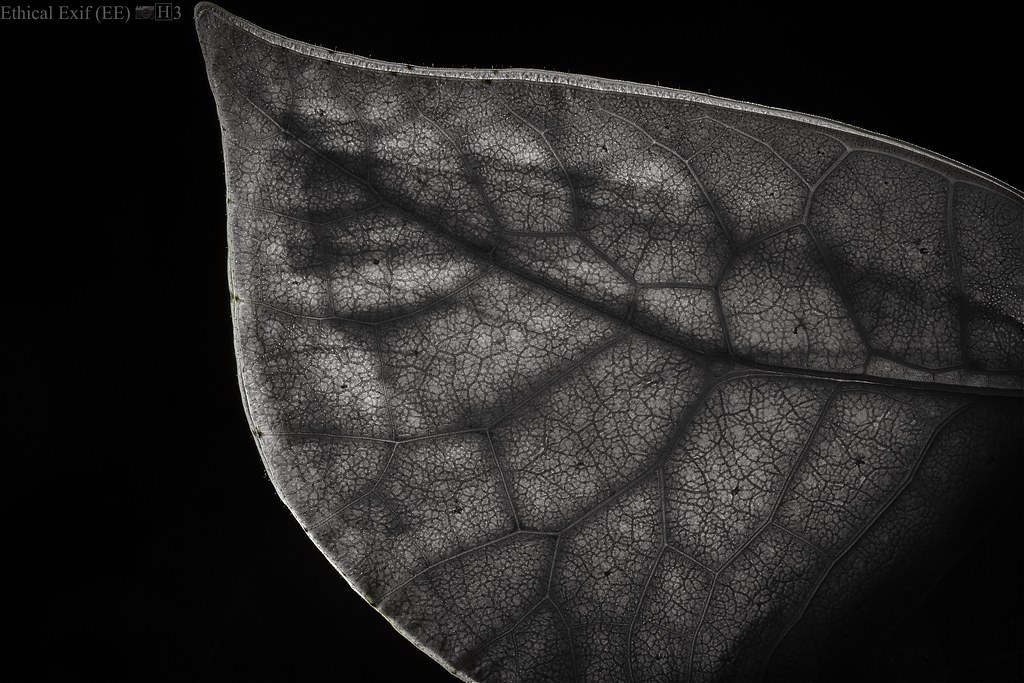 Army ants shape the understory, their marauding colonies constantly on the move can contain up to a million ants. Within that multitude however are a menagerie of mimics and parasites which have co-evolved to take advantage of the plentiful food scared up by their unwitting host. Sophisticated biochemical, physiological and behavioural mimicry ensures deception. A rove beetle (Vatesus sp.) runs within the ant column, cloaked in the colony pheromone. 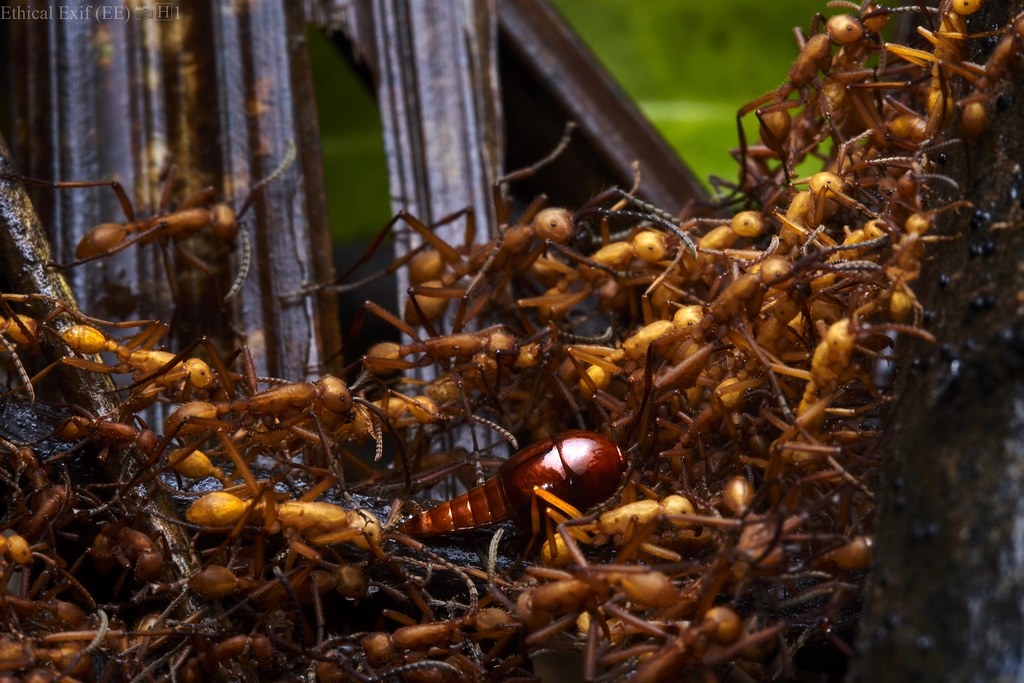 Parental care isn't often associated with arachnids, but depending on the species, juveniles may live within the burrows of female tarantulas beyond their first molt until they are not quite so vulnerable. 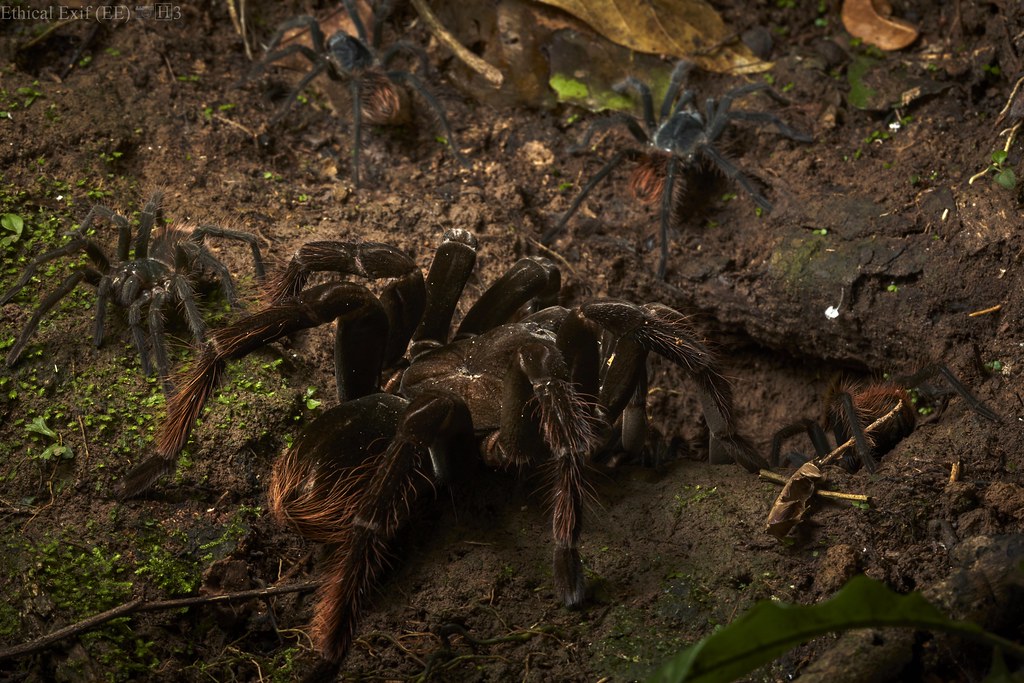 A frog falls prey to a ctenid spider: 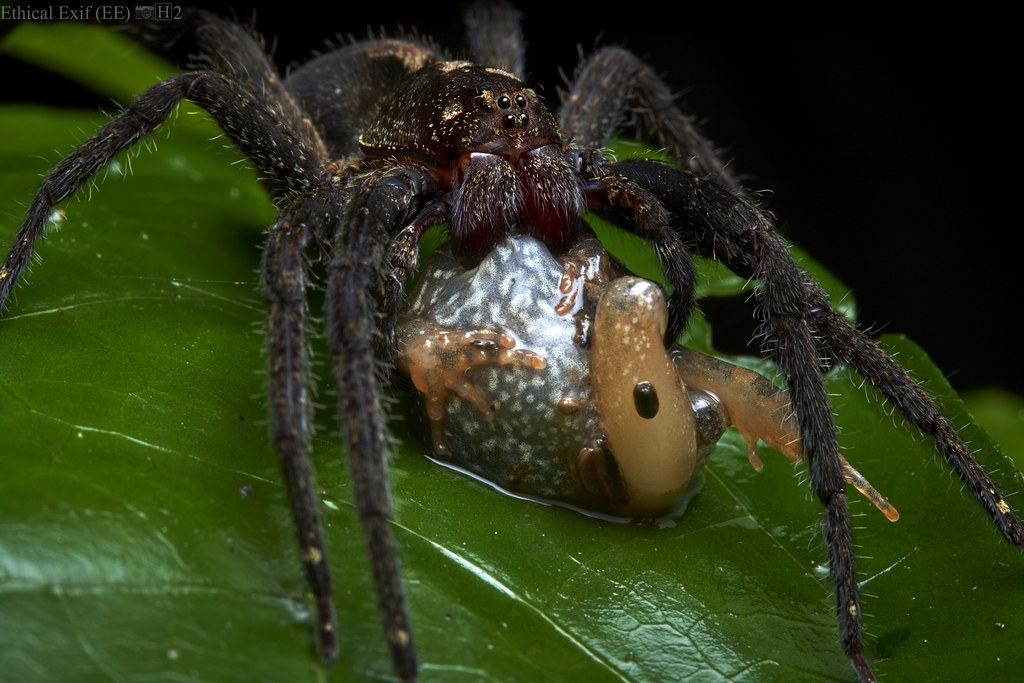 An ichneumonid wasp un-sheaths her ovipositor in order to drill into the a fallen tree trunk in search of beetle larvae in which to lay her eggs. Beetle grubs feeding on the rotting wood will emit a specific bio-acoustic signature picked up by wasps, which palpate fallen logs with their antennae, searching for the tell-tale sounds: 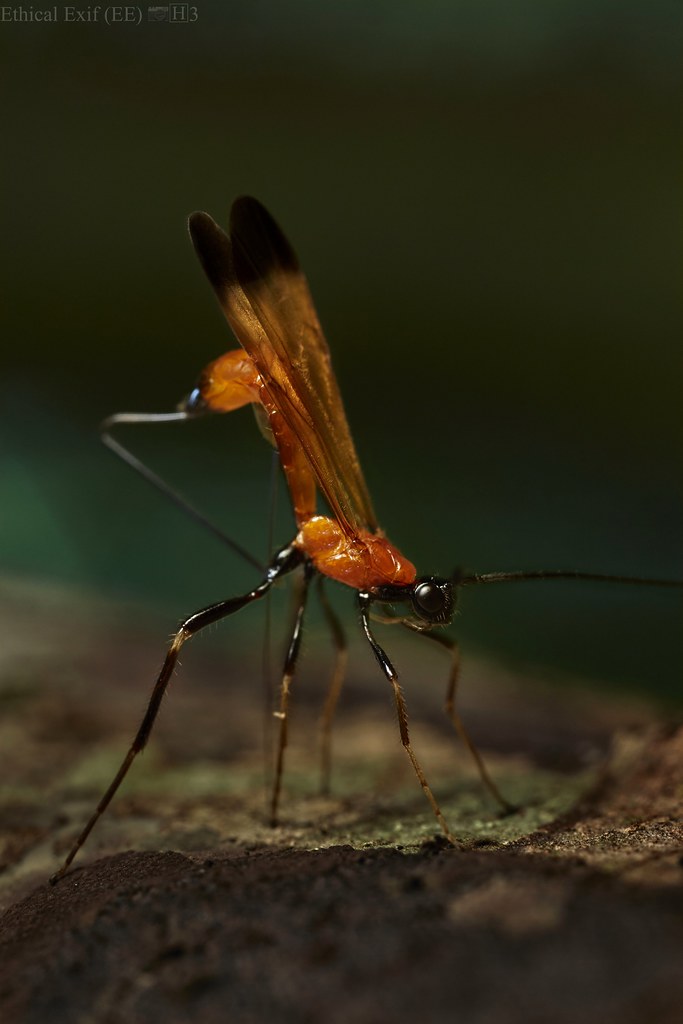 Cordyceps (Ophiocordyceps curculionidae), an entomopathogenic fungus takes another life. The spores once they land on the surface of an insect or arachnid will grow through the exoskeleton, ultimately taking control of the host's behaviour in order to facilitate its own reproductive ends: 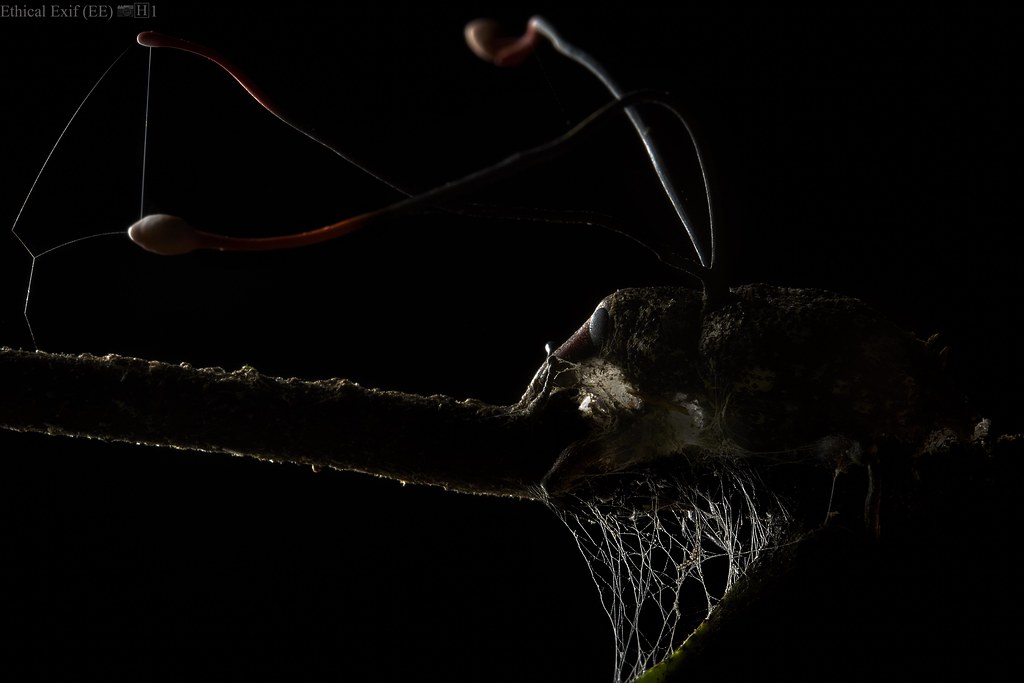 Another great set. Thanks.

Not sure I want to spend a night there. I am happy with all the snakes and other deadly critters in Australia.
Top

It has to be a wonderful feeling when you get a shot like the bee transporting the leaf...
Top

I always get a feeling of excitement when I see that you have posted a new set of pictures. It's rare to find such knowledge of the natural world portrayed in such a sensitive and respectful way, and the pictures are simply beautiful.
My favorite of this set is the wasp. It's one of those stranger than fiction facts presented in a beautiful dreamy picture.
Top

Somehow I missed these. Fascinating Amazon eco-culture you portray with your exceptional images and storyline.

Best,
Research is like a treasure hunt, you don't know where to look or what you'll find!
~Mike
Top
Post Reply Previous topicNext topic
10 posts • Page 1 of 1