I am not exactly sure where to post this, so I am just putting it in the general discussion section.

I’m mostly a lurker here in this forum, but I do enjoy visiting often. I know the forum has many wasp experts and enthusiasts, so I am posting this note to see if any of you wasp enthusiasts can help me with a project.

I am studying the “mossy rose gall” or “bedagaur” gall wasp, diplolepis rosae, with the aim among other things of characterizing venom components and ovipositing fluid components.

This requires developing a protocol to harvest and process tissue samples from the wasps. The d. rosae wasp is very small, maybe 2.5mm in length on average; the venom and egg sacs from a single wasp cannot be more than 40% or so of its volume, which comes (I anticipate) to maybe 1ul of tissue sample per wasp at best. Even diluted for processing, that is very little tissue per wasp, obviously.

I have a single rosa canina with about 25 galls currently. Based on past history, this suggests a total of maybe 30 gravid* females will emerge from the galls next spring. I have seven wasps in cryogenic storage from this last season, but this is not enough to work with, even for developing protocols. The wasps that should hatch out next spring may be barely adequate for some purposes, but it will be tight because I need to be sure to place enough wasps back on the mother plant to keep the colony going.

Question 1: So, my biggest priority is if possible to find other dog roses in my area that have been colonized by the d. rosae wasp. I’m located in the Pacific Northwest corner of Washington state. If anyone by any chance knows or owns a colonized rose, or knows where I might access one or more of them in this area, please let me know! I would be willing to travel some hundreds of miles for this purpose.

Question 2: Alternatively, if there is anyone out there that has a rose colonized with d. rosae, and would be willing to harvest and send me a set of galls from it this fall, that would be of great help!

Developing protocols for harvesting and processing tissue is going to involve a steep learning curve. Assuming that I can’t find a large supply of d. rosae wasps, it occurred to me that I might start by developing the necessary protocols using a similar, but more easily available species, and then adapting the protocols to the limited stock of d. rosae wasps.
After doing a little research, I think that any variety of small fig wasp (whether a pollinating variety or not) whose life cycle involves the regular emergence of many gravid females from the fruits (hopefully during a defined period of time) might be a good candidate as a stand-in for developing the protocols.

Since I know next to nothing about figs and fig wasps, I contacted a local fig enthusiast who tells me that he doesn’t know anything about fig wasps either, and that he hasn’t seen any pollinating fig wasps (I assume he would call any wasp in the fig that) in this area. This leads me to

Question 3: Is anyone familiar with whether any variety of fig that grows in the Pacific Northwest tends to harbor chalcid wasps, particularly any wasp that emerges pregnant? If so, what details can you give me?
Then finally,

Question 4: Does anyone have an alternative suggestion for a common small wasp species where it is relatively easy to gather a large number (20+) gravid females?

Thanks for any thoughts, insights, or information you might have!

*I use the term “gravid” for the d. rosae wasps advisedly. D. rosae replicates (predominantly?) through parthenogenesis, most wasps being born both female and fertile as a result of species-wide infection with the common bacterial insect parasite, Wolbachia.


Oh, so this isn't completely OT, here's my first-ever photo using a Stackshot rail atop a 3' Manfrotto arm clamped precariously to the top of a 10' ladder, with everything waiving in wind. 10 shots, Sony a7II, Minolta 100mm macro; Zerene. Not a great picture by any means, but the mere fact that it worked at all is crazy! 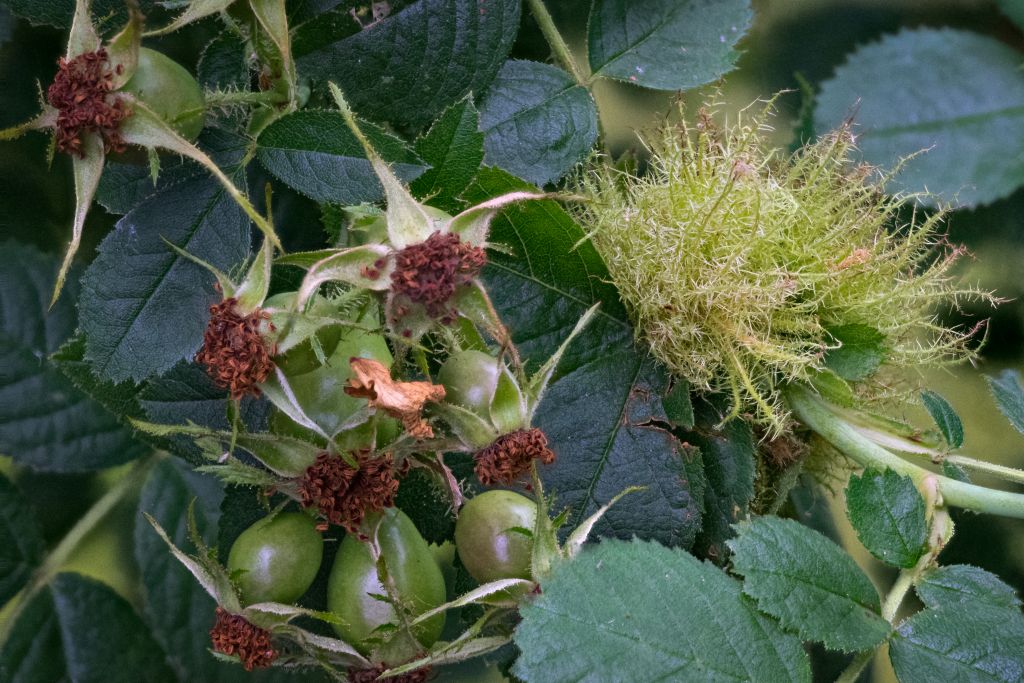 Fascinating!
Not much use to you but as I daresay you're fully aware, that rose is native to the UK - people use them for shrubby hedging. Probably plenty of galls too!: https://www.naturespot.org.uk/species/b ... -gall-wasp
Chris R
Top

Oh, to have a distribution map like that for galls in my area! I so envy the breadth of British enthusiasm for the the natural sciences...

Yes, indeed - the dog-rose seems to be a very old and venerable species!

Wikipedia says the dog-rose is called basically the same thing throughout Europe, and that it was the model heraldic rose. It is native all over Asia and Europe, and I guess some of Africa.

The "Virginia rose," which I am told is native here in the States from the east coast to across the midwest, is very similar in appearance to the dog-rose.

I have also read that the Virginia rose will support d. rosae galls, just like the dog-rose does. If so, that is very interesting, because most authorities say that rose gallers are very selective about the species of rose they will gall, and that as a rule they will not gall other species of rose at all. Perhaps they are both really one very old species of rose.
Top

Anyway, this is to all to agree that there should be plenty of mossy rose galls out there in the northern hemisphere now.

Please keep your eyes out for me? Thanks!

Those are pretty cool! Now i remember i even was photographing one once, but i've had no clue what it is! 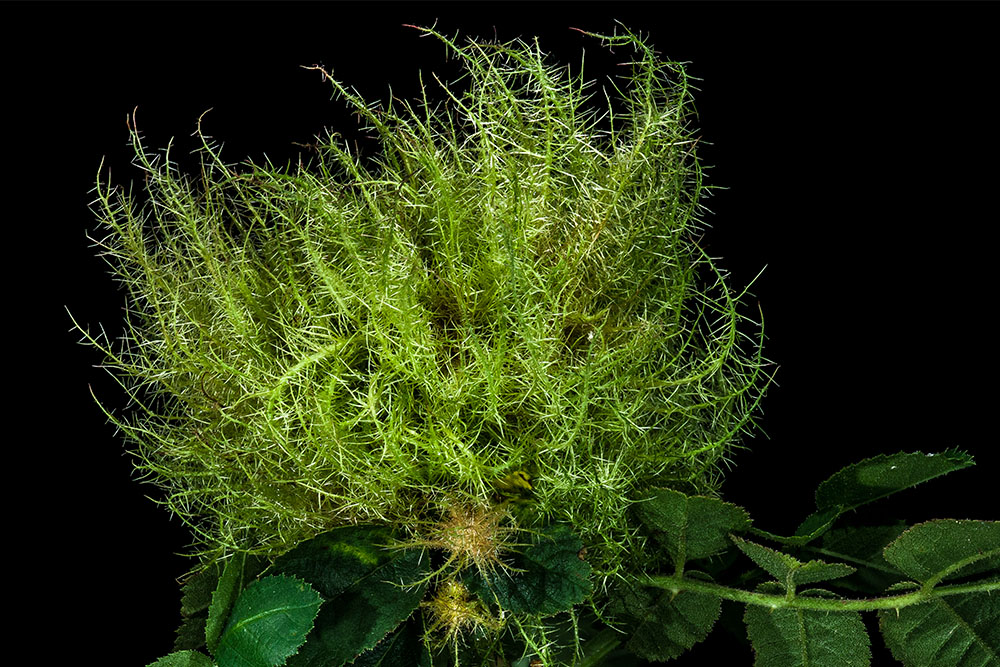 Interesting! We actually have that wasp species here in Finland too and it lives on Rosa dumalis (close species for dog rose) which grows in our southern and western coastline.
- Rane
Top

I wonder if the mail system frowns on shipping live galls internationally?

Wikipedia says that some authorities think the rosa dumalis you have in Finland is not a distinct species from rosa canina. "Rosa dumalis, the glaucous dog rose, is a species of rose native to Europe and southwest Asia. Not all authorities accept it as distinct, with the Flora Europaea treating it as a synonym of Rosa canina."

Here's a single shot picture of a dead male and a dead female in ETOH through a cheap dissecting scope. 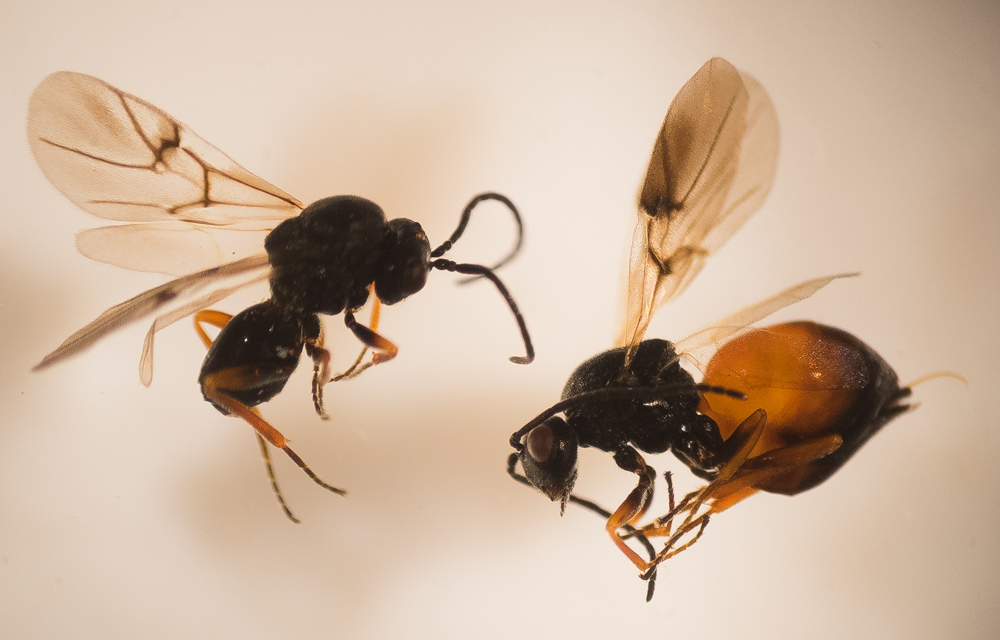 The pictured female was allowed to oviposit to exhaustion on a rosa rugosa (no galls produced); she was then recaptured after about ten days. She does not appear to have any eggs left.

The pictured male emerged from the gall and promptly died. None of the females (N=24) did that. I've read that most diplolepis rosae males (again, about 1 in 100 wasps) are found dead inside the galls. I am wondering if perhaps the males mate with female larvae inside the gall, like some fig wasps do, and then perhaps some chew a way out for her and die. Even if the sex was pointless, the help in chewing a way out could be very advantageous. Nobody yet seems to have looked into the possibility of sexual reproduction occurring alongside parthenogenic reproduction in d. rosae.
Top

This may be somewhat out of range, but developing and testing protocols with hyperparasitic pteromalid wasps might be of use. There are species that parasitize caterpillars, and some of their hosts can be reared on artificial diets so you can propagate them year round. When I was in grad school in the 80s' there was a professor in the U.S. named Gilbert Waldbauer who did research on them, using corn earworms as hosts. So his methods would be in the literature.
If there is a wasp that parasitizes Drosophila melanogaster, then things would be a bit easier!

As to the ultimate goal, I suppose that would involve making a cDNA library from one or more tiny organs in the female wasps.
Mark Sturtevant
Dept. of Still Waters
Top

A cDNA library does seem likely the ultimate goal, but virtually nothing meaningful is known about the biomolecular mechanism(s) involved in gall induction and development, so that's not entirely clear to me. Parasitoid wasps take so many tacks in bending hosts to their desires. They seem to be extremely able little biomolecular engineers...

Nothing like polydnaviruses or virus-like particles (such as found in some of the hyperparasitoids) have been identified in the literature in d. rosae venom or reproductive tissue. But nobody has looked carefully yet, as far as I can tell, either.

It seems to me, just from watching gall induction and development this past year and from reading the literature, that some larval-produced factor is possibly key to triggering dramatic gall growth and tissue differentiation away from the quasi-meristematic plant tissue that seems to be induced when the mother wasp stings the host prior to ovipositing. This could be totally wrong, of course, and timing might depend on the host or weather or whatever. However, one widely-cited experiment seems to show that if you kill the larva, the gall stops developing... I suppose it's worth confirming that.

So assuming the larvae are involved, after harvesting gravid female organs, the next challenge will be harvesting and dissecting larva for similar analysis. Researchers so far have speculated on factors in larval digestive fluid or excretions being involved. No one has harvested them. Also no attention has been directed to the possibililty of semiochemicals from the larva's pheromone glands playing a role.

It's all a total mystery, really.

The local horticulture school librarian has pointed me in a couple of good directions for finding galls locally, I hope. It turns out there is yet another d. rosae host that is a native to west coast and Easter Washington called rosa woodsii that hosts the mossy rose galler. I am also trying to reach a former entomology, plant pathology and botany professor at OSU (who has retired to write some very good poetry) named Dr. Hiram Larew, who seems like he may well have answers for me.

All hail the mighty librarian!

Before this year, I have only seen a couple of these galls, but this year there are lots of them on the Surrey Hills in south-east England. 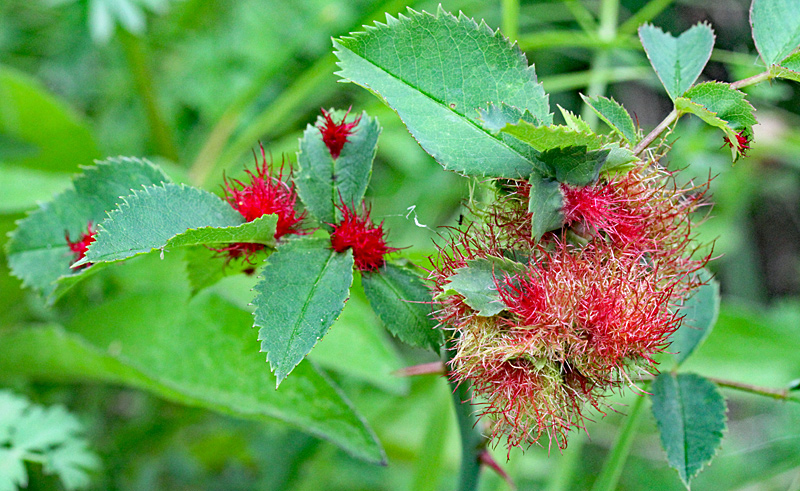 Veteran of the Gallic Wars?

This guy is stationed below a large gall with the "roof" leaf held in place with strategic bits of webbing. He seems to be missing a leg... 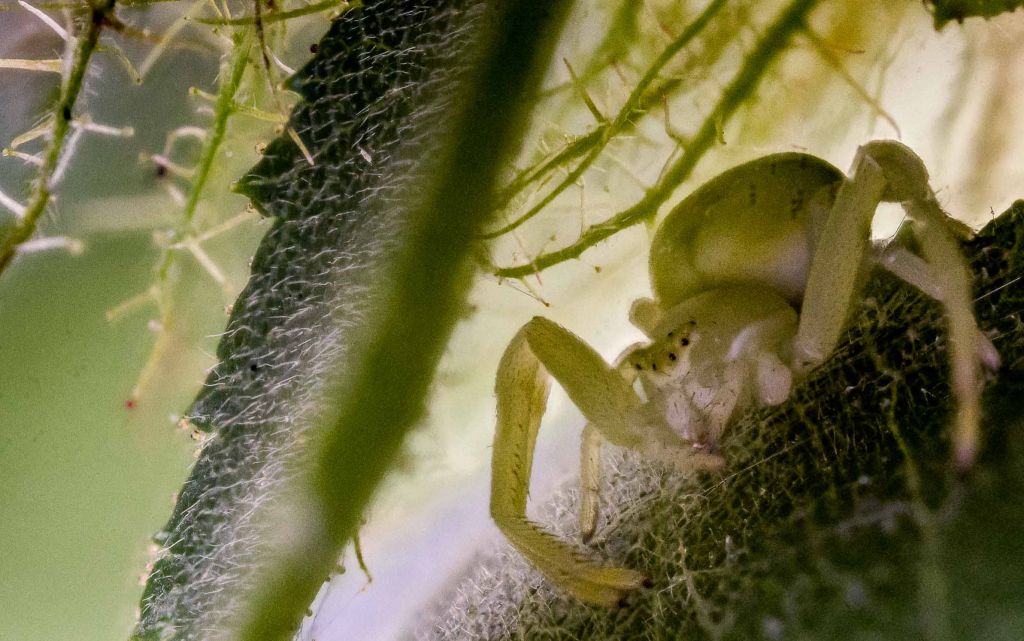