I haven't been on in a long while, but I think I am going to try and be a little more active here! Since I last left I have figured out some diffusion issues I was having, as well as got a 5D IV. I was researching Zerene again when I came back across the forum. I think this year I'm finally going to buy it

So this was an odd set and sequence of events. I'll start at the beginning with this photo: 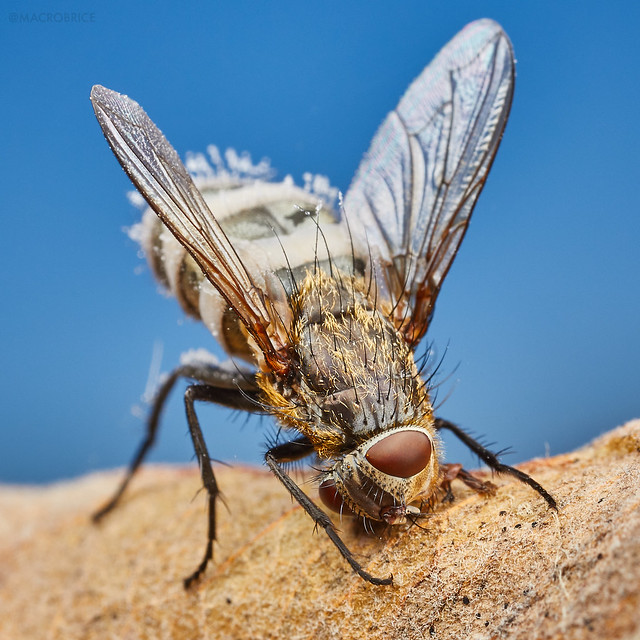 At first I thought it was just some sort of weird decay on the abdomen of the fly, and I was mainly focused on doing a memorialized death photo, if that makes sense. Got great focus on the eyes, and the resolution of the 5D IV really shows here. Coming from a 5D II I was blown away. 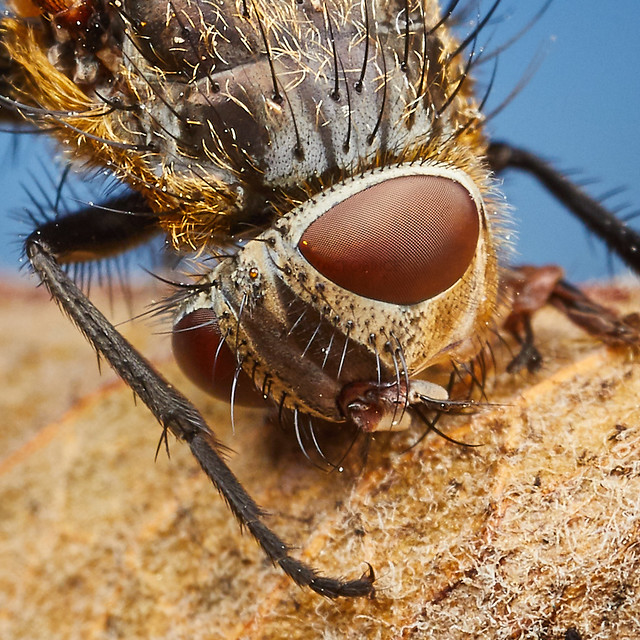 So I go back to my house and start to do some research, and find out the white on the abdomen is actually a fungus. The fungus infects the fly, causes it to bloat and die, and then the interstitial membranes in the abdomen swell and release spores of the fungus. This is where things get interesting: the fly dies in a sort of "mating posture". Unsuspecting suitors swing by for a quickie, and end up catching the worst STD of their short life. The fungus can either spread this way or just by wind.

So I go back outside looking for the same fly to get a better photo of the abdomen. Turn out I can't find it, but what I do find is that the tree that the fly was on is completely covered in dead infected flies in varying stages of the fungus' life cycle. Amazing!

Here's a couple that died together: 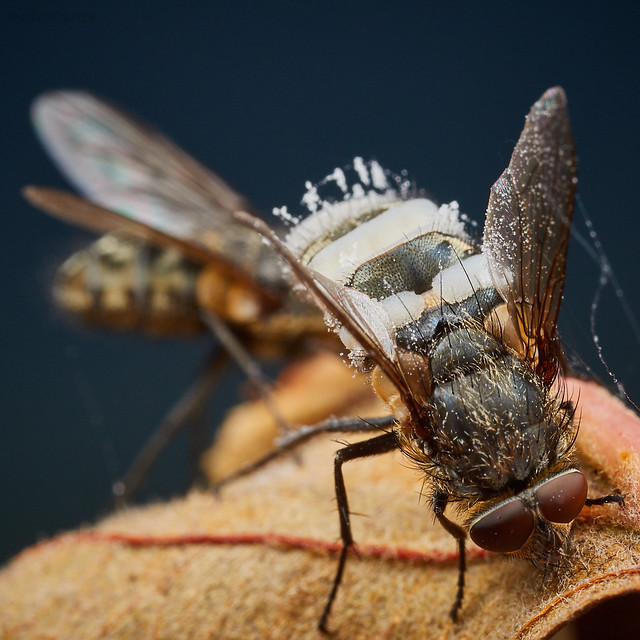 Same two, but a better shot of the abdomen and spore expulsion: 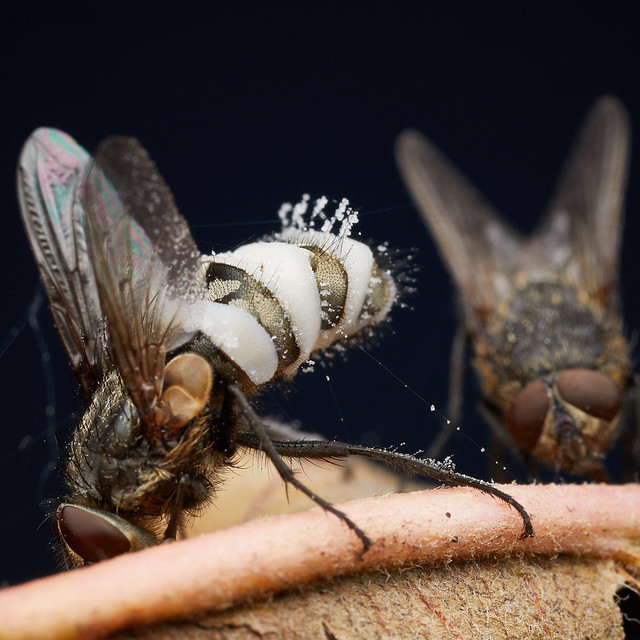 Another victim and their new host: 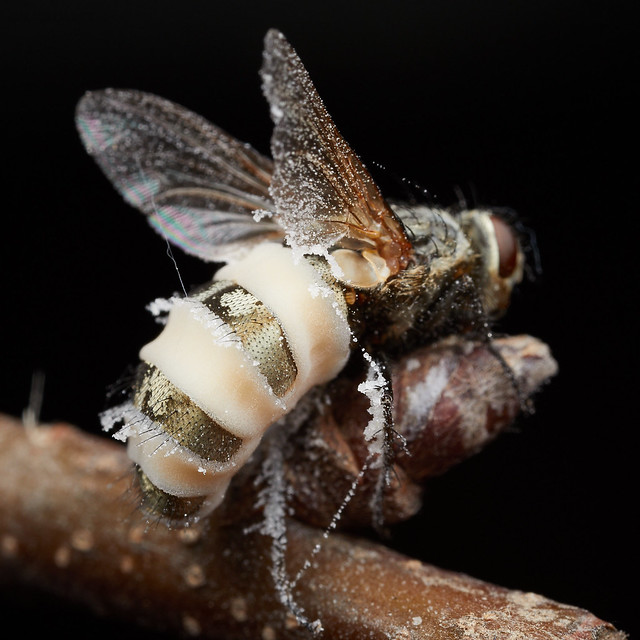 Close up of an abdomen: 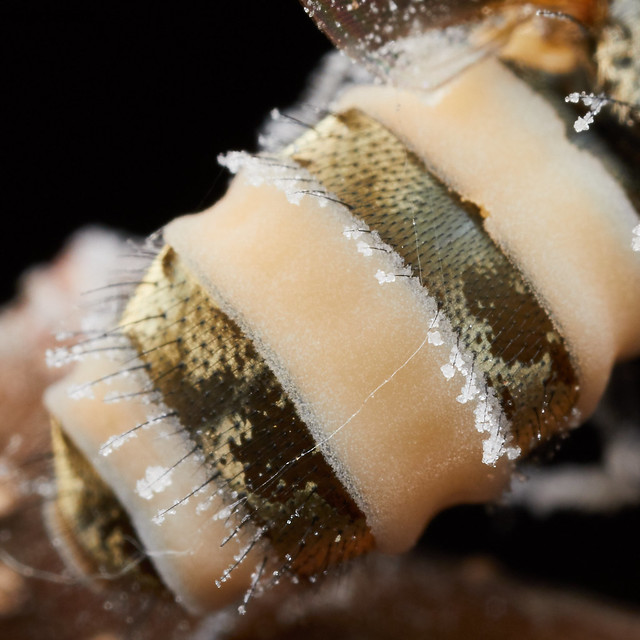 This is the end result after it all, with the interstitial membrane exposed and most of the spores evacuated: 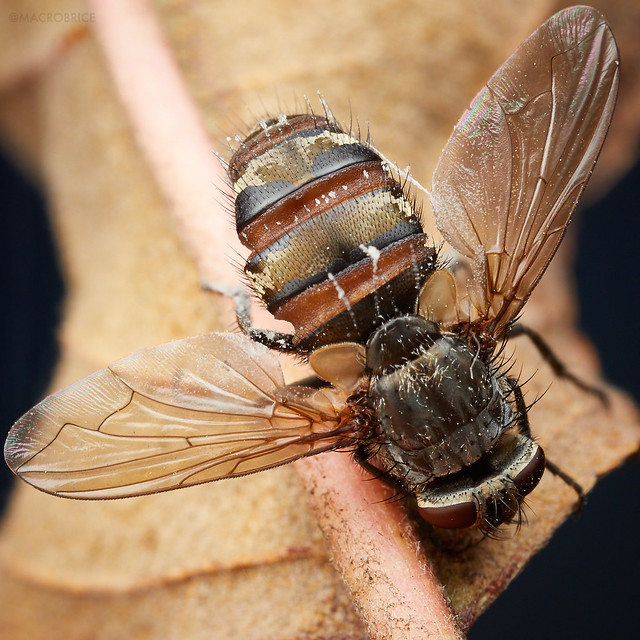 This is one of those posts where I have a realization that macro is always teaching me something new. Any other day I would have passed over the dead fly and wouldn't have thought anything of it. I'm glad that I can remain interested and hungry for more knowledge

How fascinating!!! That is an amazing set of pictures and I learned something new about STDs.
Lou Jost
www.ecomingafoundation.wordpress.com
www.loujost.com
Top

Fascinating indeed. The biology story behind is exactly why I am interested in macro. Thank you very much for sharing.
Selling my Canon FD 200mm F/2.8 lens
Top

Lou Jost wrote:How fascinating!!! That is an amazing set of pictures and I learned something new about STDs.

I was joking when I said STD, but now that I technically think about it the fungus definitely fits the description!
Check out my Instagram! http://www.instagram.com/macrobrice
Top

Gruesome but oh so interesting. I haven't found any examples here in the foothills of Western North Carolina but at a little over 6,000 feet on Mt. Mitchell I found numerous examples of this some years back on a hike over the ridge line to Mt. Craig.
Top

These are fantastic! I teach a few lectures in mycology every year. Would you mind if I used one of these images in lectures?
Fungal taxonomist
Canon 6D Mark II, Stackshot, Nikon Eclipse Ni with DIC, Infinity 3 Luminera microscope camera
Top

SallyFungi wrote:These are fantastic! I teach a few lectures in mycology every year. Would you mind if I used one of these images in lectures?

No, go right ahead! I take these for fun, and I would love for others to see and learn from them.
Check out my Instagram! http://www.instagram.com/macrobrice
Top

Very nice shots and an amazing story;
love it (and I´m glad we do not have such STDs in humans).
Top