[Admin edit, RJL, as explained below.]

Both of these go into a question that I've been meaning to ask. Shooting without lens reflection on spherical objects. 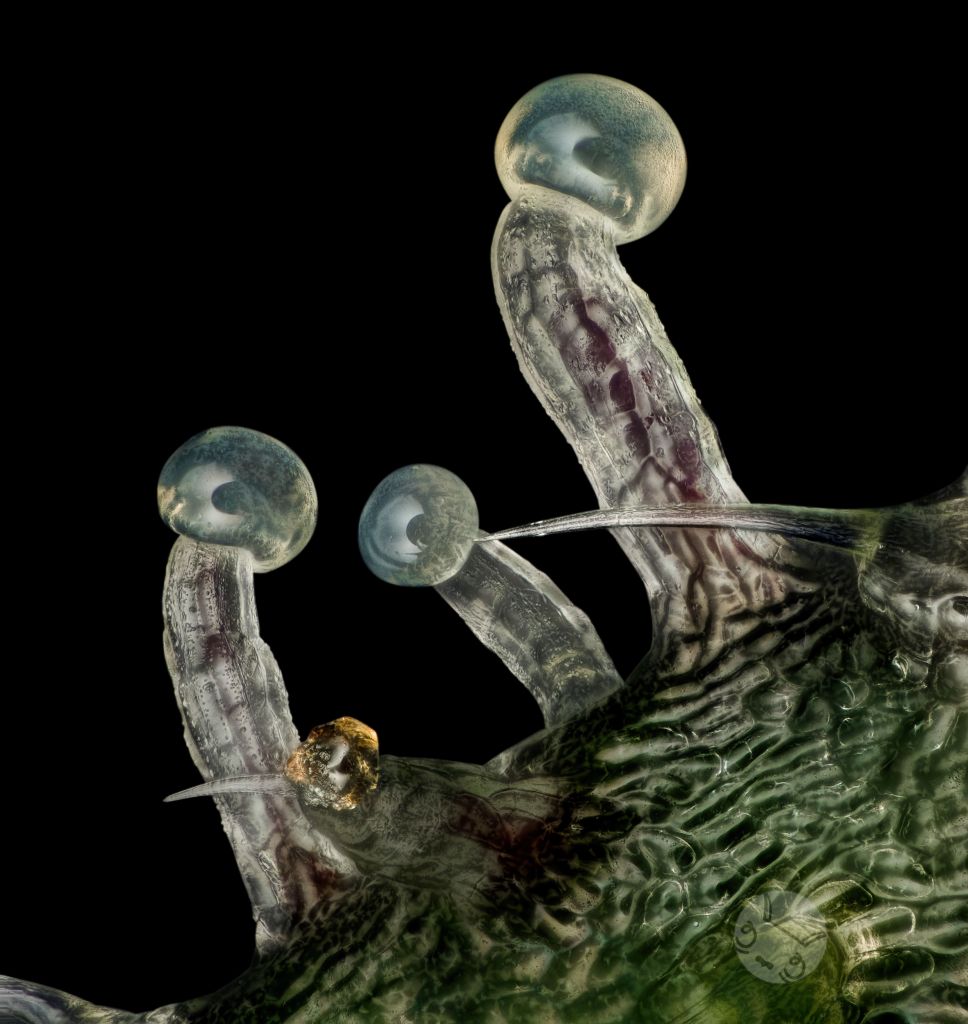 For diffusion I use a 3d printed half sphere that's been sanded down- though I actually believe this one was a ping-pong ball. The lighting setup for this shot (and most of my previous were lights at 10 and 2, but I have since adapted to a strobe which I plan to shoot from above).


Sometimes I'll retouch in an area that will remove the reflection, but this can cause it to look a bit flat at times.

I see a good amount of images in the SUBJECT thread which are no longer available so it's hard to figure out what was ever decided upon. At higher magnifications (80x) I see much less of the iris (or none at all).
Top

concon, I have split your new post into a topic of its own, rather than a reply to http://www.photomacrography.net/forum/v ... hp?t=25771 .

That's to avoid the confusing situation of reviving an old thread, most of whose images are no longer visible, and where your new posting would not even appear on the first page.

Now, regarding your question...

I don't see a question mark, so I'm not quite sure what you've been meaning to ask.

But for starters, I'll imagine that it's something like "How can I shoot a spherical mirror without capturing a reflection of my lens?"

The basic answer is that you can't. The spherical mirror will stubbornly persist in reflecting a fisheye-distorted view of its own environment. Your lens is part of that environment, so it definitely will appear in the reflection. The best that you can do is to camouflage the lens so that it's not immediately recognizable.

The essence of the thread where you initially Reply'd was to stick a black mask over the front of the lens. That prevents light striking the subject from anywhere in the "red zone" 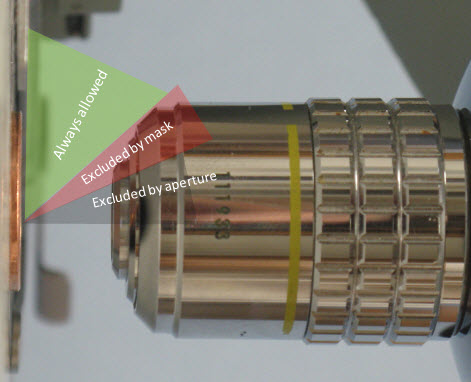 Eliminating that light has two effects.

First, it avoid certain reflections that were thought -- in the original thread -- to be degrading the image. More careful experiments showed that that concern was mostly not justified.

Second, and relevant to your question, eliminating that ring of light turns the lens into a black blob that is less distinctive and harder to identify.

However, making the whole lens black does not avoid most of the effect seen in your image. That white ring-shaped reflection is not the lens. It's the diffuser, with light shining through from the original light sources behind it.

To get rid of that ring, you would need to use some differently shaped or illuminated diffuser whose edges would not form that obvious segment of a circle. As shown at http://www.photomacrography.net/forum/v ... hp?t=13636, second panel of images, second row, left column, a large diffuser placed close to the subject and not shadowed by the lens can do the job.

Getting rid of the "black hole" of the lens is a harder problem. To do that, you need to have light reaching the subject from the area of the lens's own aperture. In turn, that means either (1) running light through the lens from the back side, or (2) sticking something like a partially silvered mirror in front of the lens, which you can bounce light off while shooting through. Neither option is simple and effective. Option (1) has the problem that you would need to somehow balance light coming through the lens with light coming from the body of the lens and around the lens. Anything except a perfect match will produce the dreaded circular rings. Option (2) works OK at low magnifications and small NA, but at higher magnifications with larger NA, anything thicker than a pellicle cannot be shot through without degrading the image due to added aberrations.

I am intrigued by your observation that

At higher magnifications (80x) I see much less of the iris (or none at all).

Can you say more about this, please, and preferably show an example?

No worries about splitting the topics up-

Apologies on the delay- I was trying to get a good example at 80x with my new setup, but I've got a phantom drift that is ruining all of my stacks nowadays. I think my subject is too young and is wilting during stacks... Or the strobe is outputting more heat than my old dual speedlight setup and contributing to the drying out- not a problem for this topic.

I may see less of a reflection due to the extra surface detail that is visible at higher magnification. I will make sure to update this thread with a good example.

Here is an example at 20x (cropped) where I have removed the black circle by retouching through Zerene- utilizing the surface detail: 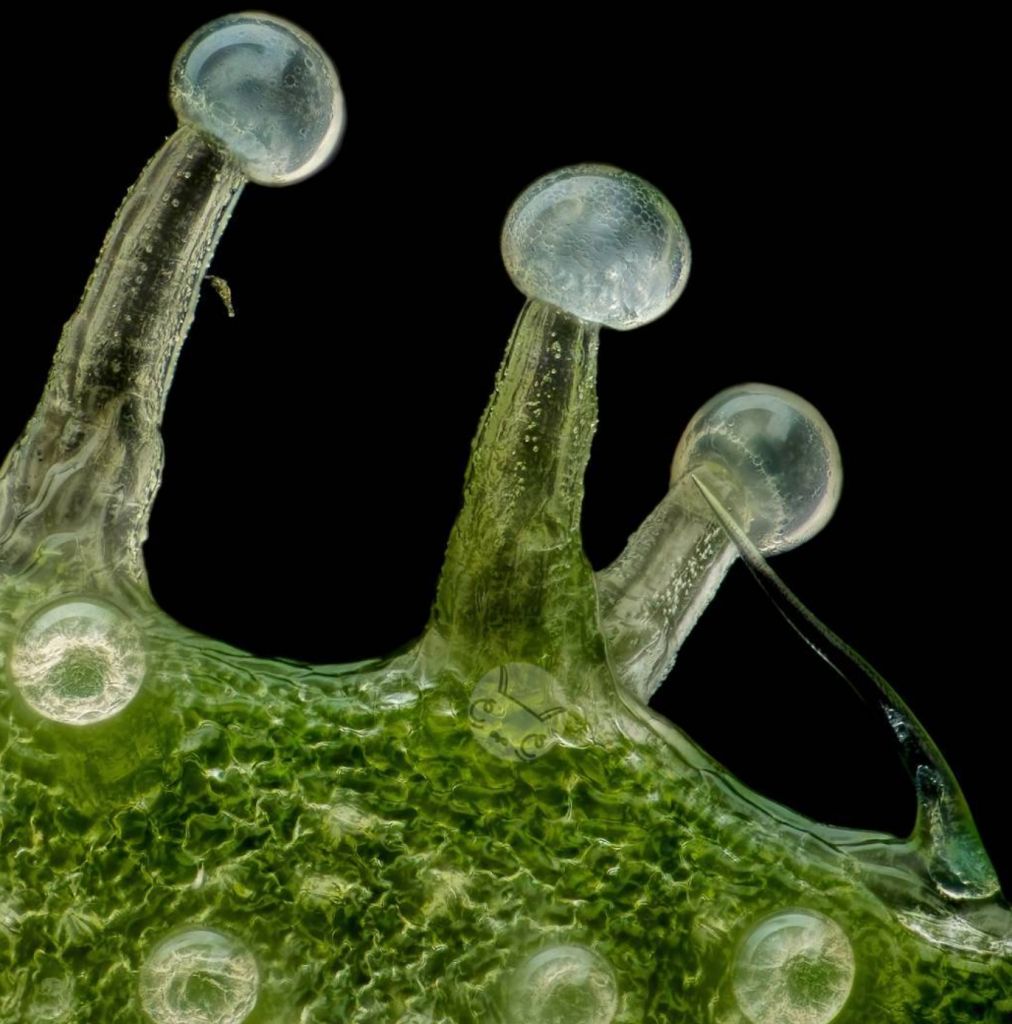 This result is 'good enough' in my books, but I'm interested in the mirror technique you mentioned and will be investigating.
Top

Using the surface detail is a powerful technique in some situations. See the discussion and 3rd image at http://www.photomacrography.net/forum/v ... hp?t=11271 for my version of that method.


I'm interested in the mirror technique you mentioned and will be investigating.

Again, beware of aberrations if you try shooting through the mirror. It can be troublesome even at low magnifications and modest apertures, like 1:1 and nominal f/2.8 (effective f/5.6, NA 0.09). See for example the discussion and illustrations at http://www.photomacrography.net/forum/v ... 680#100680 . At higher magnification and larger NA, the problem gets worse quickly. That's why my comment about using a pellicle -- when the mirror is only a few microns thick it can be tolerated at substantially higher magnifications.

But there is another technique that might be considered also. It sounds a little crazy and I haven't actually tried it, but theory says that if the aperture of the lens were broken up into a bunch of random dots, you'd still get a clean image at focus. With a sufficiently large aperture and working distance, for example like the Mitutoyo M Plan Apos, this could possibly be implemented by shooting through a thin sheet of opaque material with holes randomly punched in it. Then the reflected environment would have a random dot pattern instead of the dreaded "black hole" caused by the normal fully clear aperture.

If you happen to play with this idea, please let us know what happens!

I see Edmund Optics sells a variety of pellicles. That was a very interesting suggestion!
Lou Jost
www.ecomingafoundation.wordpress.com
www.loujost.com
Top

Exciting suggestion indeed! I've bookmarked the store page and will research more; I like that there's something already out there that can be explored.

I understand where you're going with the other method- it's a bit too adventurous for me right now haha. Unless I'm misunderstanding, it sounds like I'd have to source a micron thin mesh of sorts (I really like the sound of that).

I was able to complete a stack at 80x today (its been weeks!); however, I'm actually still able to see that black dot so I'll take back what I said earlier. It's ever so faint. 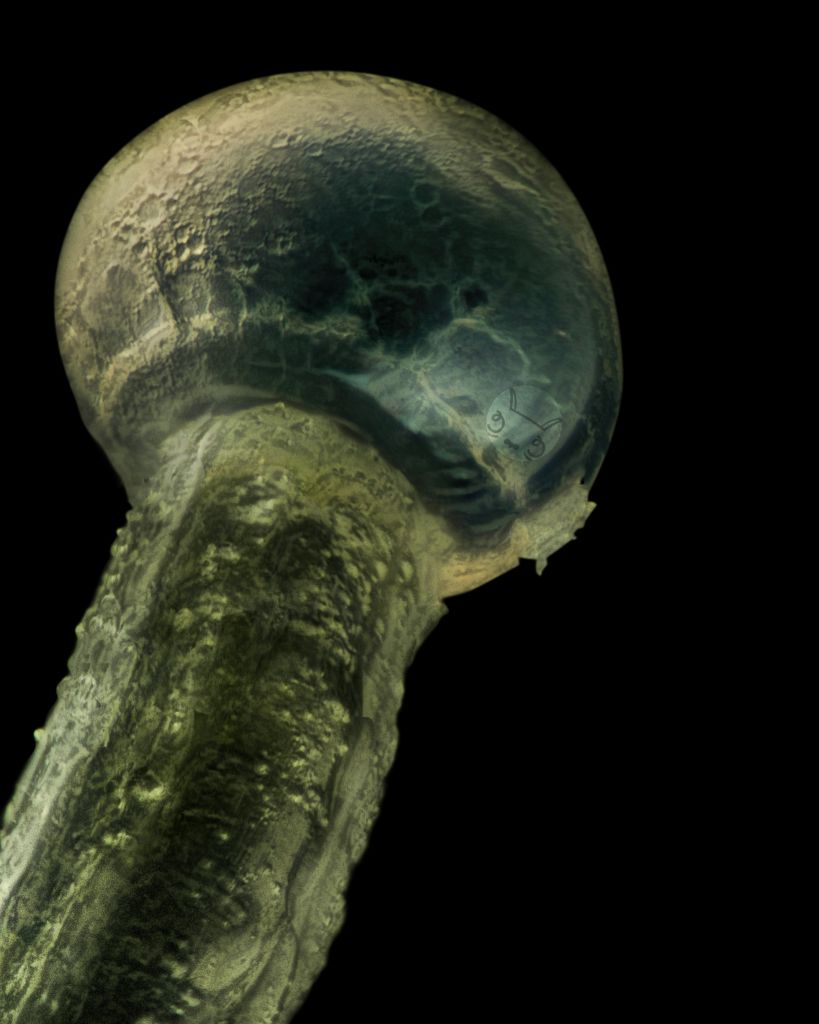 concon wrote:Unless I'm misunderstanding, it sounds like I'd have to source a micron thin mesh of sorts.

No, the mesh can be thick. The lens should form a clear image from the light that gets through the holes in the mask. Light that bounces off the sides of the holes will produce veiling glare and maybe some other problems. I'm thinking that aluminum foil, typical thickness 0.016 mm, with holes that are say 0.500 mm, might produce only a tolerable amount of junk from the edges.


I was able to complete a stack at 80x today (its been weeks!); however, I'm actually still able to see that black dot so I'll take back what I said earlier. It's ever so faint.

The way I read this image is that the edge of the "black hole" is very fuzzy. That could mean that it's blurred from aberrations, or perhaps that the stack just didn't go far enough back to catch it in focus.

Got it. I'll run some experiments next weekend and see if I can make a few samples to try out; I'm more worried about the extra junk you mentioned as I already deal with a fair amount of depth issues already- this is what initially came to mind when first reading the technique.

I believe I retouched the the hole using the detail and pixel brush so this result is more of the latter (not going far enough), just sort of controlled.
Top

Rik, I don't understand why diffraction would not be much worse with lots of little randomly-scattered apertures versus one big one.....am I misunderstanding something about your suggestion?
Lou Jost
www.ecomingafoundation.wordpress.com
www.loujost.com
Top

Maybe the same principle is at work as in an astronomical interferometer.
Top

Lou, sorry I missed your question earlier. Munich is correct; it's the same principle as in astronomical interferometry. As long as the waves are still able to interfere with themselves as usual, then a collection of small apertures acts much like a single larger aperture that has the same expanse as the collection.

Reviving this to ask a new question-

I often find that the bottom part of the head, which is spherical, will end up MUCH softer than the other details. I have plenty of assumptions as to why this is and do my best to combat it with slabbing and retouching, but I was curious if anyone had suggestions with similar subjects. Fixing via Photoshop can yield hit-and-miss results and can end up feeling unnatural; I've actually been using the complete black-background replacement less these days. The greater the magnification the more likely I am to encounter the softening.
Top

concon wrote:I often find that the bottom part of the head, which is spherical, will end up MUCH softer than the other details.

A corollary to the above is that individual details in an image can be resolved more or less well, depending on how mirror-like they are. To say this more emphatically: With reflected light, resolution is determined not just by the NA of the lens, but also by the reflective characteristics of the subject, and by the lighting. And resolution may vary for details within a single image, depending of these details' reflective characteristics.

As for the mirror-like spheres on the tips of your trichomes, my sense is that the lower portions of these spheres are not "seeing" as wide an angle of the light source as the upper portions, and are therefore not reflecting light into the entire NA of the lens. Because of this, the lower portions are rendered with lower resolution, as if photographed with an objective of lower numerical aperture. The only remedy I can suggest is to try to make your lighting reach these lower sphere portions from a wide range of angles.

BTW, I find your trichome images quite interesting. Please keep them coming!

It took me a few reads, but I'm on the same page and think you've nailed it.

When stepping through source images, especially with spheres, I can see the properties you are referring to- each source image shows the 'bottom' of the head in a very different place than what I would consider the bottom when looking at it as a 2D rending.

I shoot with my strobe positioned above the subject so the bottom portions of my images are generally much darker than the rest; I added white boards to bounce additional light to these areas- I could probably use more light, but I have problems with my images losing too much contrast and may need a harsher bounce with something like aluminum.

I can see why some people have multi-strobe setups now...