Now I'm wondering how I can freely adjust the camera position into portrait or landscape position. Is there any extension/ adapter to do so?

anyone with experience please help

Could you show me detailed set up in photos please ??
That should help
Top

According to Alan Wood's Olympus OM system close-up and macro equipment Auto Bellows, "The camera mount can be rotated through more than 180°, and is locked in place with a knob at one side. The mount can be removed, to make it easier to attach the camera body."

At the top Alan's page is the photograph you posted, which shows the front of the bellows. The next image down shows the rear of the bellows, and in particular, shows the rotatable, removable camera mount. My guess (never having used an Olympus bellows), is that if your unit includes this mount, you're good to go. If it's missing, you may want to replace it.

Alan is a member of this forum. If he responds to your question, you will get a very authoritative answer.

(Also, if the image in this thread belongs to Alan, as it appears, we should ask his permission before posting it, and provide attribution.)

This information is really helpful. I'm new to this OM system too and just got the item this morning

I'll try to figure out as I come home
Top

Could you show me detailed set up in photos please ??
That should help 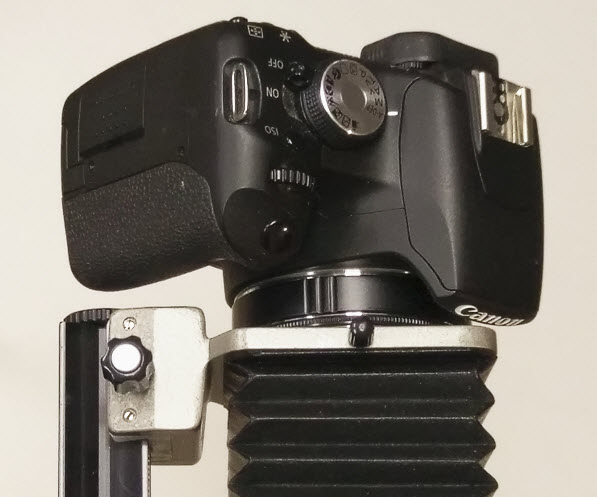 The small black knob on the side of the bellows standard loosens to unlock the rotation.

I'm sure you'll notice that this is a Canon camera. On this bellows, the Olympus camera bayonet has been replaced with one for Canon.

I hadn't noticed that Rik posted while I was typing. Am quite certain Rik's answer is as authoritative as I'd expect Alan's to be.

Rik, never having had this item in hand, I'm not clear on how the extension tube attaches to the rear opening of this bellows. Perhaps gaconsooner won't find it immediately obvious, either.

Do you have a Canon mount of some sort between the extension tube and bellows? Or does a Canon bayonet fit the opening well enough that the small black knob keeps it nicely captive?

I use the OM adapter that came with the Auto Bellows, then a short OM extension tube, then a cheap Chinese OM-EOS adapter from eBay.

If you don't have the original OM mount, shown below, then I don't know what to do. This is the part that can be rotated. 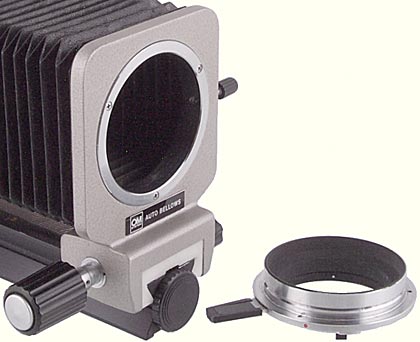 I bought an Olympus bellows like that a dozen years ago, then set about wondering how I could adapt it to Nikon, there being a simple grooved sleeve in the back of the bellows rear flange/standard.
Then I realised that the onemale bayonet adapter it had come with, was Nikon fit. (not very well made).
I have read they they "are available" but have not seen another in all the time I've owned the bellows.

Olympus to female Canon bayonet is easy, not so to Nikon
Chris R
Top

If you don't have the OM adapter that came with the Auto Bellows, try looking on eBay for:

This does the same job as the adapter for the bellows, but has a shorter lever that does not get in the way of the overhanging pentaprism.

This page mentions other adapters that do the same job, but I haven't seen them so I don't know how long their lever is.

Chris R - I am pretty sure that Olympus didn't produce adapters for Nikon or other camera brands.

Chris S. wrote:Do you have a Canon mount of some sort between the extension tube and bellows?

I made adapters for Canon and Nikon several years ago. More about those in a minute.

But in the intervening years the range of third-party adapters available off the shelf has expanded hugely, and I'm pretty sure that today the problem can be solved with a simple purchase.

It turns out that the Olympus bellows rear mount consists of several parts that are fastened together by three screws. One part is the cylinder with groove that fits into the bellows standard. A second part is the Olympus bayonet, and then there's a couple of other parts that serve as a handle on the outside, and on the inside I suppose something to do with telling the camera something about the "lens" that is attached.

What I did for Canon was to disassemble the Olympus rear mount, set aside the Olympus bayonet and other small parts, then drilled out a chipped Canon M42 adapter so that it could be mounted with the same three screws. That left just a couple of light leaks, which were simple to plug with crumpled aluminum foil. Here's what it looks like, Canon adaptation on the left and original assembly on the right.

I'm pretty sure the same approach would work fine for Nikon as well.

But, for reasons I can't remember, my adapter for Nikon uses a completely different strategy. For that, I machined a plastic piece that is cylinder with ring on one end, to fit the bellows, and on the other end it has something like M57 threads to fit a cheap set of Nikon extension tubes. That looks like this: 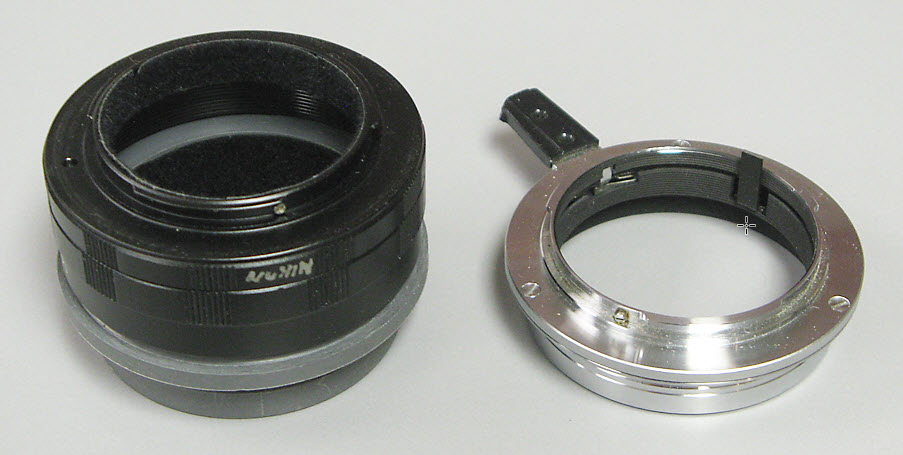 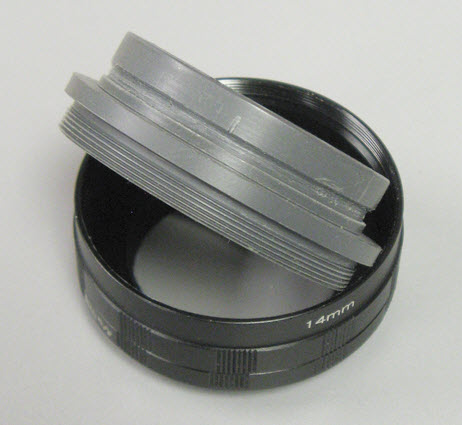 And rotate the whole illumination setup to go with it? What if it's in water?

Moving the subject 90º means moving the lights each time

Another cheap easy way to join Olympus to Nikon is to go via "Chinese", threaded, <$10 extension tubes. First you may need an Olympus OM to OM4/3rds adapter, then a set of tubes of each of
OM 4/3rds
Nikon

The intermediate threads have to be the same, as mine are (check with the supplier and use the same one for both).
It gives an assembly about 25mm long.
Chris R
Top
Post Reply Previous topicNext topic
16 posts