From time to time this comes up, with most of what I remember being discussed as in the posts in this thread:

with those rather ancient-looking graphs.

On a Thorlabs page I came across this one: 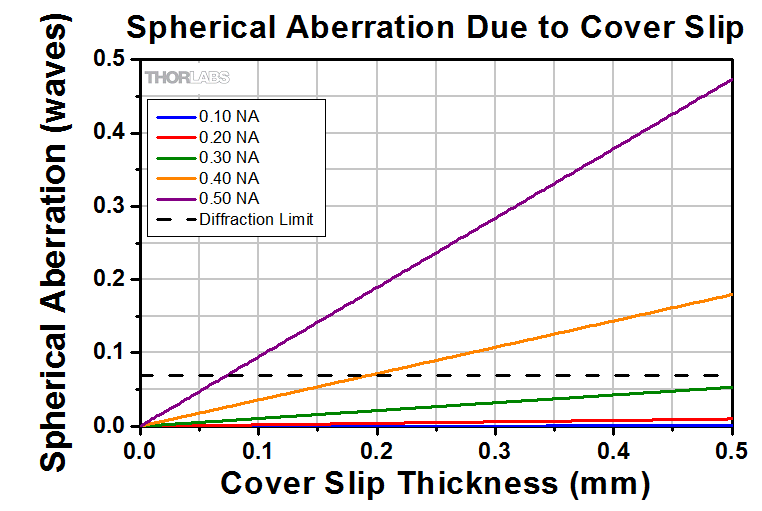 with the commentary:
"Coverslip Correction and Correction Collar (Ring)
A typical coverslip (cover glass) is designed to be 0.17 mm thick, but due to variance in the manufacturing process the actual thickness may be different. The correction collar present on select objectives is used to compensate for coverslips of different thickness by adjusting the relative position of internal optical elements. Note that many objectives do not have a variable coverslip correction (for example, an objective could be designed for use with only a standard 0.17 mm thick coverglass), in which case the objectives have no correction collar.

[Edit - unfortunately the Thorlabs link no longer brings up the graph]
[Edit (rjlittlefield 3/7/2019) - at this time, the graph can be accessed from the Thorlabs link, by clicking on the "Objective Tutorial" tab, then clicking on the thumbnail image of the graph. A direct link to the graph is https://www.thorlabs.com/images/tabimag ... G1-780.gif .]
Last edited by ChrisR on Sun Jul 23, 2017 12:35 pm, edited 1 time in total.
Chris R
Top

Chris, thanks for posting it, much easier to understand than old graphics, I find a bit weird the dashed line only referring to 0.4NA, would be better a reference for other apertures.

Some interesting discussions on the subject in this case referred to high NA oil microscope objectives: http://www.photomacrography.net/forum/v ... p?p=139366
Pau
Top

Pau, the dashed line is a reference for all NA's. It reflects Thorlabs' judgement that about 0.07 "waves" (probably 1/16 lambda) is the limit for an acceptable amount of added spherical aberration.

Regardless of the exact numbers chosen, the graph certainly illustrates that wavefront error is directly proportional to the error in cover slip thickness, and that the error is strongly dependent on NA (varying as NA^4).

Dave Jackson (of Better Microscopy) gave me almost the exact number (0.2mm) for NA 0.40, not long ago. He calculated based on Loveland.

He also told me that a good way to see SA is to view a low contrast subject, such as a mounted diatom, in darkfield. More out of focus halos indicates note SA.
Last edited by zzffnn on Thu Mar 07, 2019 8:14 am, edited 1 time in total.
Top


Should that not be: a cover slip error of 0.2mm (giving a cover slip thickness of 0.19mm) would still give an acceptable 0.07 waves of SA with objective NA of 0.40

Also, would the spherical aberration maintain the same ratio with a negative cover slip thickness of -0.2 i.e. 0.15mm?

Would have been nice to see included an NA of 0.65, to see what variation in cover slip thickness was acceptable for the venerable 40x objective.
Though extrapolating from the graph it would seem to be less than 0.05mm
Zeiss Standard WL & Wild M8
Olympus E-p2 (Micro Four Thirds Camera)
Top


Should that not be: a cover slip error of 0.2mm (giving a cover slip thickness of 0.19mm) would still give an acceptable 0.07 waves of SA with objective NA of 0.40

In the Thorlabs explanation, I think they're looking at 0.17 mm error as being what you get when the objective is expecting a cover slip and you don't provide one, or it isn't and you do.


Also, would the spherical aberration maintain the same ratio with a negative cover slip thickness of -0.2 i.e. 0.15mm?


Would have been nice to see included an NA of 0.65, to see what variation in cover slip thickness was acceptable for the venerable 40x objective.
Though extrapolating from the graph it would seem to be less than 0.05mm

I think you're suffering from decimal point slippage.

After correcting for my decimal point slippage, it would then seem that even an NA of 50 allows quite a bit of cover slip variation without ill effects.
Zeiss Standard WL & Wild M8
Olympus E-p2 (Micro Four Thirds Camera)
Top

It would be easy to infer that if the distortion from SA is the same as from diffraction, then it's "OK".
Is that fair?
I wouldn't be surprised if one can tell the difference if the same amount of blur is added, even if the source is different. While small errors may be lost, those of magnitude comparable with SA, may not be.

I think I recall investigations (initially the fellow with 3-eyed avatar) looking into the effect of OOF blur + diffraction, and finding something less than double, but much more than "no difference".
Chris R
Top

I wonder if a fellow microscopist who owns Klaus Kemp 8 form diatoms can test 0.17mm cover error at NA 0.4 (20x objective), in darkfield.

Even DIY darkfield stop would work, since NA is so low, as long as the darkfield mask is not too small (too small a mask would reduce diatom dotting ability a bit).

I only going to run a similar test. But:

1) my test would focus on vision difference/impression only. No photo, pixel peeping or crop.

That is because my main (imaging) scope is packed away now and my main interest herein is determining whether or not my eyes can see the difference at 0.17mm cover error at NA 0.4 (I am making a DIY portable field scope by pushing NA 0.4 to a 0.18mm error). *

2) I think the only suitable diatom I have is some Gyrosigma strew-mounted by a friend. It is of good quality, but it is not individually arranged by Klaus Kemp.

My eyes are decent (not very sharp, but not bad either). By looking at diatom images alone, I can tell modern achromats from vintage apos and guesstimate not-so-severe delamination.

I am not biased and do not prefer either solution (I have an alternative, slightly cheaper but less convenient solution that does NOT push cover error at NA 0.4).

* If a microscopist pixel peeps a lot or plan to do critical high resolution photography, then (s)he probably should not push objectives into such optical error at all.
Last edited by zzffnn on Thu Mar 07, 2019 8:17 am, edited 2 times in total.
Top

ChrisR wrote:It would be easy to infer that if the distortion from SA is the same as from diffraction, then it's "OK".
Is that fair?

Pretty much. An even more fair statement would be that if the wavefront error from SA is the same as from a focus error that is acceptable, then the SA is acceptable too. After all, the essence of SA is just that it causes different parts of the lens to focus at different distances.

I do not know the answer to that question. It may have to do with the interaction between SA and defocus, or between SA and some other aberrations. While I very much doubt that anybody can see 1/16 lambda SA in an otherwise perfect image of a perfectly planar subject, it is very simple to see the difference between 1/4 lambda defocus and 5/16 lambda defocus. So it could be that a standard for SA around 1/16 lambda reflects some threshold of further degradation, added to an image that is already degraded by other aberrations.

When combining SA and defocus, the relationship is definitely not as simple as adding, even if you interpret "add" as meaning in the sense of Pythagoras, sqrt(a^2+b^2). As best I can tell by simulation (at this point in time...), defocusing a system with small amounts of SA results in maximum wavefront distortion that is about the same as defocusing the same distance without SA, but the distribution of distortion across the aperture is different. My tools are not sharp enough to say exactly what that does to the image quality.

My eyes could barely see any difference, between near perfect cover depth vs. 0.34mm cover error, at NA 0.4 darkfield, using the same objective and mounted diatoms.

Maybe the perfect cover depth is very slightly sharper, but I doubt I can tell them apart if I don't know which is which.

Test was done using an Olympus C20x NA 0.4 1.2mm corrected objective, with either 7 cover slips or 5 cover slips. I rolled the fine focus back and forth and compared how well diatom dots were resolved.

A highly experienced microscopist made that inifinity objective stop down for me and computed the theoretical cover error (infinity 180 mm -> 160 mm finite conversion makes a 20x 0.17mm infinity objective to have around 0.67mm cover correction on 160TL).

Yes, the AO infinity 20x was not used with its original compensation tube lens on 160TL scope and that may have affected imaging significantly.
Last edited by zzffnn on Thu Mar 07, 2019 8:17 am, edited 1 time in total.
Top

Edited to fix a decimal error noted by Rik below. Thanks Rik for catching that!


This has been an interesting thread for me since I often have to shoot through water or other media.

I found it convenient to extract the equations implicit in the graphs and solve them for the allowable thickness of the medium as a function of NA. Maybe somebody else will also find this useful:

One thing that is not included in the Thorlabs graph is the dependence of spherical aberration on wavelength. The graph refers only to red light (670nm).

Some sources say spherical aberration increases for shorter wavelengths (because the medium's index of refraction varies with wavelength) . One source (https://www.mathworks.com/matlabcentral ... aberration) says that a good estimate would be that SA varies as the reciprocal of the wavelength. So for 405nm, an objective with NA=0.28 could tolerate only 0.45mm of medium rather than the 0.75mm allowable for red light. So to be safe, you might want to cut the above estimates of allowable depth in half.
Last edited by Lou Jost on Thu Mar 07, 2019 3:20 pm, edited 4 times in total.
Lou Jost
www.ecomingafoundation.wordpress.com
www.loujost.com
Top

Yes and no. The first statement is true, but I think the stated reason is wrong.

Wavefront errors such as defocus and SA depend on phase errors across the aperture. That means that they depend on differences in optical path length divided by lambda. Smaller lambda gives larger error, even when the optical path lengths don't depend at all on wavelength.

There may be some change also due to dispersion (change in refractive index with wavelength), but I'm thinking that effect will be quite small compared to the length-divided-by-lambda effect.

I haven't worked it out, just quoted the internet sources. Graphs in some of them do show a strong dependence on wavelength, for whatever reason.
Lou Jost
www.ecomingafoundation.wordpress.com
www.loujost.com
Top

I'm curious, what internet source did you find that says the reason is because the medium's index of refraction varies with wavelength?

The link that you gave to https://www.mathworks.com/matlabcentral ... aberration says nothing about refraction.