Since my trip to Tiger Beetle Town on Laesoe I have sought for an opportunity to cath a better picture of a Tiger Beetle in its hole.

After searching many places I found a new place with around 25 holes just 10 min. bike ride from my home!

As so many times before I must realize that many natural phenomenon seems rare and strange until you learn to see them. Then you suddenly see them frequently. 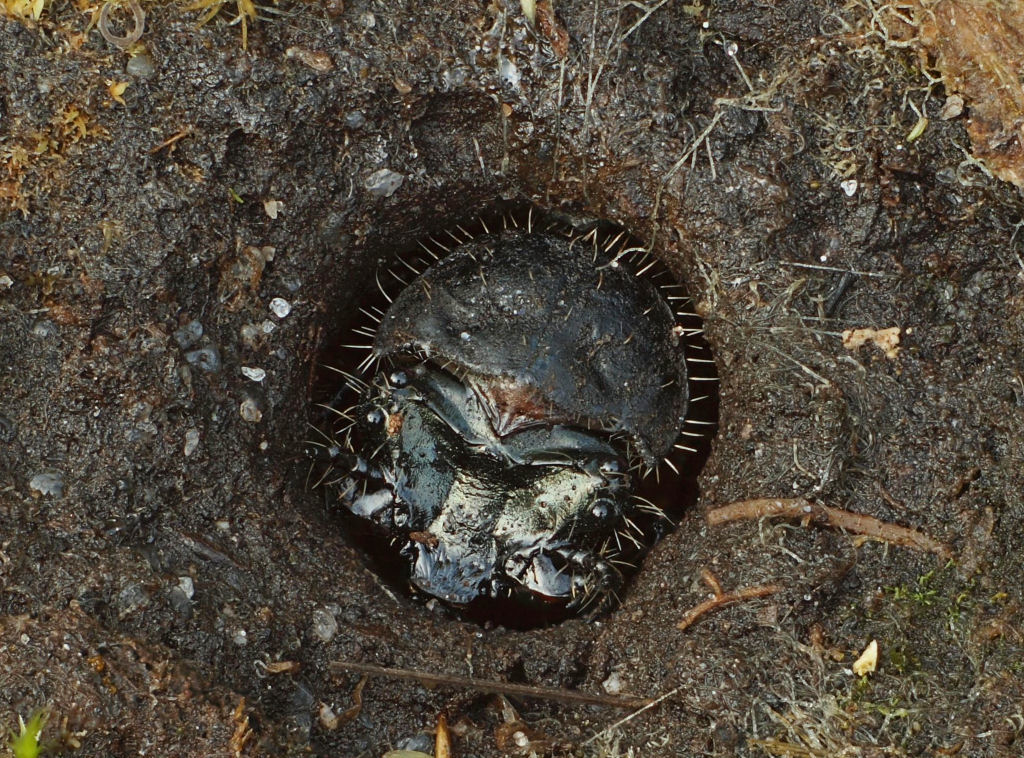 This animal is one of the most difficult models I have tried.
It is black and glossy, highly reflective. Impossible in sunlight.

My 50 mm macro ended up too near the hole which is only about 4 mm in diameter. I had to mount a 40 years old Vivitar 90 mm macro to get sufficient distance with my 4/3 Olympus.

No flash, no direct sunlilht. Found a hole in the shade with a not too anxious animal. Tripod, focus rail, wire release. 62 exposures at 1/15 sek f/4.5. I could have done with less exposures, but was not sure about the stability on the soft ground. And to make 3D it is nice to have plenty. This is for cross gazing. 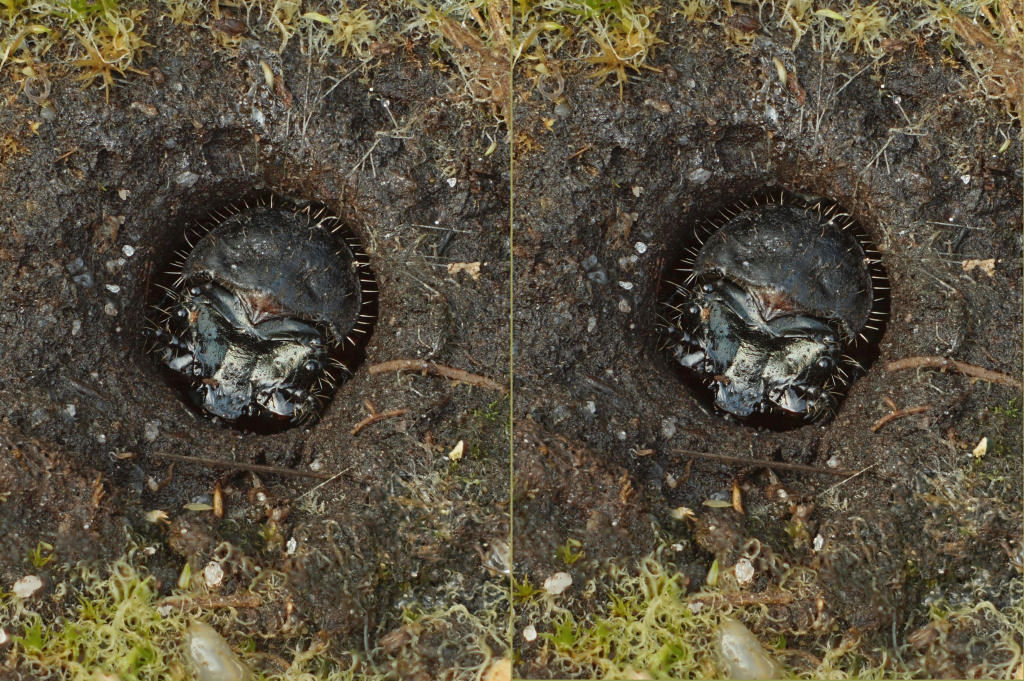 The black part of the animal covering the opening of the hole consists of the head shield and the dorsal shield of the first body segment. The rest of the larvae is soft and white and hidden underneath.

The mouth parts points to lower left. The short antennas point almost directly at the spectator and reaches to the rim of the hole.
It is possible to see the 4 hemispherical eyes looking in all directions for prey or enemies. There is a tiny relection of the photographer behind his tripod. The big diffusor is the sky.

If an insect on the ground comes near the hole the larvea jumps out like a flash, catches the prey with its great mandibles (they are in the shadow on the picture) and tries to pull it down into the hole. If it is too big the prey is stuck and eaten while still visible from the outside, as shown in my original post (link at top).

The larvae live like this for 2-3 years untill they are big enough to enter the pupae stadium.

The stereo is fascinating, and a little scary.
Geoff
Top

Thanks!
I appreciate your comments.

Great pics. Now I need to go look up what they're like outside their holes

Have a look:
Cicindela larvae

The 3 pairs of legs at the front are for jumping at the prey.
The hook at the back further down is for bulling it back into safety.

Seeing that makes me very happy they're so small, what a nightmare to have that monster stalking you

Excellent images -- and thanks much for the stereo!

That particular picture confuses me about the anatomy. The combination of positioning and the way light bounces off the thoracic plate makes it look almost like the head has been partly torn off and left to hang.

But I found lots of other pictures by just Google image searching for "tiger beetle larvae".

It has good diagrams of how the larva fits into its burrow. It also describes a fascinating behavior of one species in which the larva, in trying to evade predation by a wingless wasp, effectively jumps out of its burrow, curls into a "wheel", and rolls off down the beach assisted by wind. Very cool behavior, well documented!

Thanks, Rik for the relevant links.

I have seen drawings of the larvae in its hole several times, but could not find a suitable link when I needed it.

And what a suprising story about the wheeling larvae. I have never heard about that. Perhaps because none of our 3 Danish species live in windy dunes.


The combination of positioning and the way light bounces off the thoracic plate makes it look almost like the head has been partly torn off and left to hang.

When the animal is "hunting" without any disturbance the head and the first thoracic plate take the form of a flat, rather even cirkular lid closing the opening and situated level with the surrounding terrain. As show in the drawing in your second link. If the earth is dark both the hole and the animal are almost invisible.

If you are out for a walk and look down you will discover holes appear magically a few meters in front of you.

My pictured animal sits a little withdrawn below the earth surface, possibly beceause my presence makes it is a little unsecure. That might also be the reason for the slight bend of the "lid".

An other interesting fact is that the hole is not completely circular. It has a slight D-shape. In my picture the more straight side is towards 7 o'clock giving space to the big (but unfortunalely not visible here) big mandibles.

You may wonder how it cathes its prey with jaws pointing upwards? The funny thing is: the larvae jumps backwards. The larvae at the drawing from your link jumps to the left. The specimen in my picture jumps towards 1 o'clock.

While jumping the head is bend backwards causing the eyes to point down on the victim and the jaws to also point down! Smart construction!